She Returned One Night 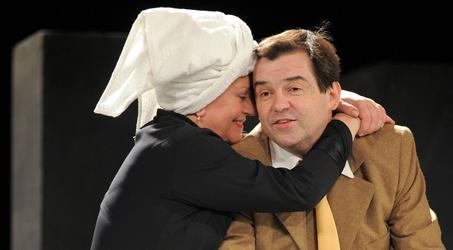 A mysterious comedy about love beyond the grave

This brilliantly-written comedy by the foremost contemporary author of Argentinean theatre plays has travelled all over the world with great success and has been awarded many prestigious prizes. Pedicurist and old bachelor Manuel regularly visits the grave of his mother to describe what happened to him every week. He spices up reality a bit and keeps some things secret in order to show himself in a better light. When he announces to her one day that he finally wants to get married, an unbelievable surprise awaits him at home: His mother Fanny returns from her grave after ten years of “rest” to keep an eye on the situation. This energetic women starts to meddle in the life of her adult son: and as he is, understandably, the only person who can see and hear her, a chain of comic situations, misunderstandings, exchanges and confusions starts taking place… Eduardo Rovner captures the importance of friendship and love in his comedy about a beautifully vital, though dead, woman, in an unbeatable way. In the leading role – who else than Zdena Herfortová

A person should die and let live

Vít Závodský 1. June 2008 zdroj Kam - supplement XIV
This “balancing” work introduces us to a Jewish pedicurist and bar musician, Manuel Stern, whose decision to end his bachelor’s existence by marrying a Catholic, Dolly (Jana Musilová), gets complicated by the “resurrection” of his active and dominant mother after ten years of being dead, accompanied by a retinue of her friends from the cemetery.
This two-part, not-exactly-short evening of 18 acts was produced by leading Slovak director, actor and pedagogue Emil Horváth as his first creative encounter with Brno City Theatre, in dramaturgical cooperation with Ondřej Šrámek and Tomáš Steiner, and with a guest team from Bratislava (scenographer Peter Čanecký, choreographer Juraj Letenaj). A large number of mobile dark grey cuboids and cubes, supplemented by the necessary furniture and a moveable stage and orchestra which plays and sings live, enable a smooth transition between Manuel’s humble flat and two other environments. Some quite witty sequences (a night scene with his mother and a morning one with Bureš’ Julio) alternate with situational black humor, with tendencies towards sentiment and more serious testimony about the binding power of tradition, the natural right for personal happiness and the need for forgiving understanding. This is the conclusion which the son (in the well-disciplined performance of Erik Pardus, bearer of the Thalia and A. Radok awards), who acts immaturely in certain situations, getting entangled in his own excuses, and his vitally active, pragmatic and loving mother Fanny (acted by the temperamental Zdena Herfortová) arrive at.
The programme, traditionally thorough yet highly accessible and readable for theatre-goers, contains as an extra a bountiful look at the history and culture of far-off Argentina.

She rose from the dead one night

A great many artists who've been kissed by the seven muses reflect the mysterious world of the dead in their works. Few of them, however, in such a crazy and tragicomic way as the Argentine playwright Eduardo Rovner in his play She Returned One Night. And it was this play that was performed two weeks ago as a premiere by Brno City Theatre.

The author, whose parents came to Argentina from Moldavia, travels to see the adaptations of his texts and is said to have a weakness for ensembles from the Czech Republic. He actually attended the premiere in Lidická Street and he was moved by the performance.

The plot of the seemingly occultist comedy is simple - Fanny, who suffers from being extremely over-protective of her son, is restless even after death and upon learning that her beloved son is getting married, feels the need to return to him. Rovner opens the cemetery gate for her with a magical-realist key and releases her into the world of the living - but it is only her son who can see and hear her. This is the source of many misunderstandings and comical situations. The main pillar of the story is the intergenerational mother-son relationship, into which both of them project their ideas about the ideal partner and frustrate each other because of the difference between the ideal and reality.

The author of the Brno production is the Slovak director Emil Horváth, who is cooperating with Brno City Theatre for the first time. Both he and his production team unambiguously deserve praise. The set by Peter Čanecký is formed from a few large grey cuboids which change from gravestones into a table or bed and vice versa as needed. The production obtains colour thanks to the epic but sober and civilian costumes by Čanecký.

She Returned One Night is, however, mainly an opportunity for Zdena Herfortová (Fanny) and the multi-award-winning Erik Pardus (Manuel) to display their acting prowess. The roles of the energetic and bossy mother and the son who lives his own life went well together for them (excuse the morbid comparison but with regards to the setting of a part of the plot at a cemetery, I cannot help it) like soil on a coffin.

After all, according to Herfortová, the play isn't about death and dying but about life and the joy of life.

Jana Musilová (Dolly), Igor Ondříček (Manuel's fellow player Anibal), Zdeněk Bureš (superstitious double bass player Julio) and Josef Jurásek (the ghost of sergeant Chirino) second the main duo. Even though Brno City Theatre is valued mainly for its musical productions in the Czech Republic, it is the Drama Theatre which shows an unprecedentedly stable level of quality, whether it be the intense drama The Death of Paul I, directed by Hana Burešová, the soulful gangster play by Střežený Parnass, The Diary of the King, or the classic piece that makes everyone laugh, Charley's Aunt. She Returned One Night is the next bead on this admirably long string.

The dead live… in memories

The comedy by Argentine playwright Eduardo Rovner, She Returned One Night, has found a home here in the Czech Republic. The author was one of the guests of the Book World trade fair in Prague. Rovner's comedy, the two premieres of which - in Brno and in Most - the author managed to visit during his stay in the Czech Republic, deftly combines humour and a spiritual topic, somewhat flavoured by the popular "magical realism". The bachelor Manuel is finally getting ready to get married, which provokes his mother to rise from the dead and go and "check out" the bride. The writer says there is a story behind the creation of the play, of course also in the spirit of magical realism. One day, when he was blaming his deceased mother for his non-successes, her face suddenly appeared on the wall and ordered him to finally let her rest in peace.

She Returned One Night already has four Czech productions on its account, and is your most popular work worldwide. What do you attribute its wide popularity to?

This question is hard to answer but I like to ascribe it to the fact that my theatre style contains a lot from Central European culture. My parents came to Argentina from Moldavia and they felt their roots were in Europe. My father played Janáček, Martinů and Smetana to me throughout my childhood - I really love Smetana's My Country. My parents also read books by Central European writers to me. Of course, Latin America is also present in my work, and mainly Argentina. Perhaps it is the mixture of Central European perceptions and magical realism that makes my play so attractive here.

The dead have all the bad qualities and bad habits that they had when they were alive. How did you get this idea?

I believe that the dead live on in our memories. If you have someone among the dead who is dear to you and to whom you talk inwardly - or maybe even aloud, then the deceased person returns and I see no reason why he or she should be idealized. In She Returned One Night I offer the possibility that the dead mother is also only really present in memory. The mother's suitor and neighbour from the cemetery, Salo, is afraid that he will lose the one he loves and therefore says to the mother: If your son forgets you what will I do without you? I like inventing other worlds and one of them is the world of the dead.  I have depicted it as it is in my imagination, and therefore parties can easily take place in this world and "life" goes on there.

You also write puppet performances and musicals. Are there any universal topics within this great variety of art forms which you are interested in?

There are matters which I can grasp, and matters which remain a mystery. However, I am aware of one universal topic, and it is the fight between the individual and society, the conflict between the wishes and desires of a person and the obstacles placed before them by society. Thanks to the conflicts that arise, and the necessity to overcome those obstacles, society develops. We all need freedom on one side, and social coexistence on the other. You know, every theatrical work can have a political interpretation. The mother in She Returned One Night could easily represent a dictator with her authoritarian directions at a metaphorical level - and the son a new generation which opposes this authoritarian governance. I heard that it was played like this in some countries. I didn't write this play with this intention, though. However, the spectators will always understand the play within their own context.

As you have already touched on politics - what was the position of theatre in Argentina during the reign of the army junta?

It was theatre, in particular the movement called Open Theatre, which opposed the military character of the regime the most. There were several playwrights, we got together and wrote a few plays that were critical of the regime, of course allegorically. Only one theatre dared to perform them and the whole set was a tremendous success. So much that the regime had the theatre burned down. But we didn't let this bring us down, we went somewhere else and again, the auditorium was full. The regime fell shortly afterwards. I do not want to overestimate our contribution but I believe that, in its way, theatre contributed to the end of the regime.

You say that as long as you remember the dead, they remain with us. How important do you consider memory to be as a writer?

Memory is of key importance. You can't get rid of the past. I won't forget the years spent in fear that the regime would arrest me or have me disappear. The memories are also part of the past, but it is harmful to live only from memories. In She Returned One Night, the dead come to Manuel and want to take him into their realm. He refuses and chooses the future. For me personally, the play is very important because thanks to it, I finally managed to be reconciled with my dead mother. 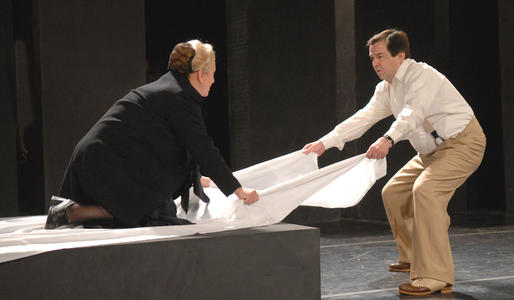 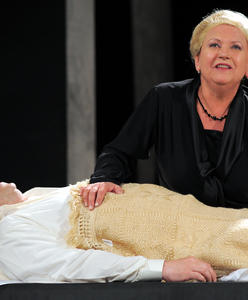 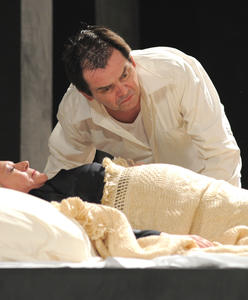 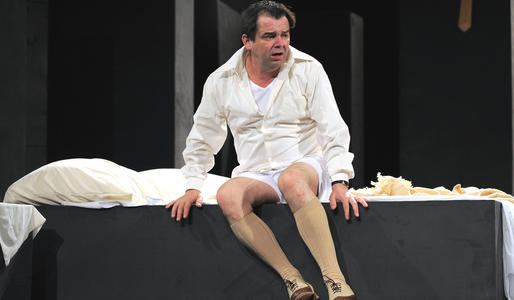 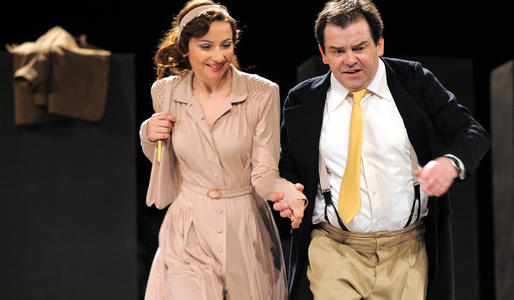 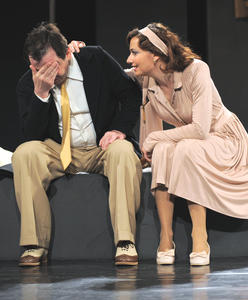 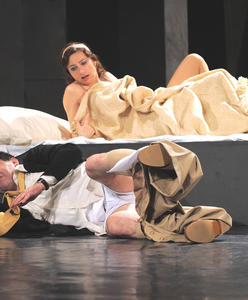 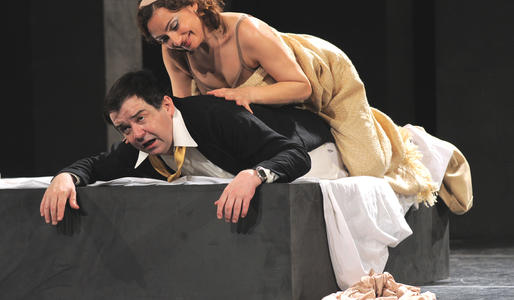 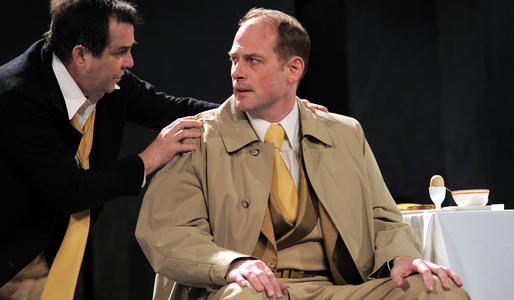 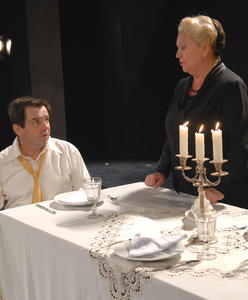 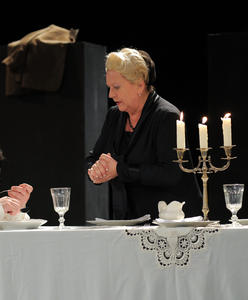 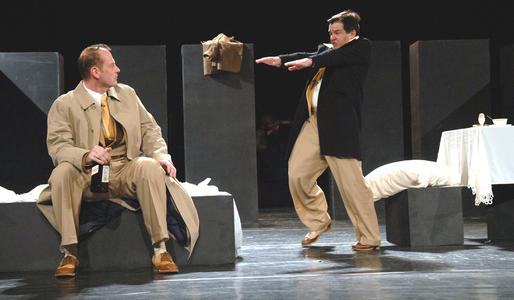