The Cousin from Batavia 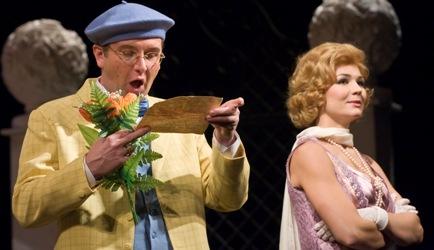 The Cousin from Batavia is unambiguously the composer Künnenke’s greatest success. His intimately-mooded operetta for seven characters, without any choral or ballet numbers, has a characterful melodicity and light, intoxicating composition. The story is set in Holland, where Julia has been waiting 10 years for her cousin, who has confessed love to her, sworn to be faithful to her until the end of his life and then left for Batavia (the capital of Java, today’s Jakarta). Even though the cousin hasn’t sent any news for ten years, Julia is still in love with him. Uncle Joseph is intending to have Julia married to his nephew, who she doesn’t know. The reason is the great amount of property Julia owns. Then, both the nephew and the cousin appear at the same time.