If a Thousand Clarinets 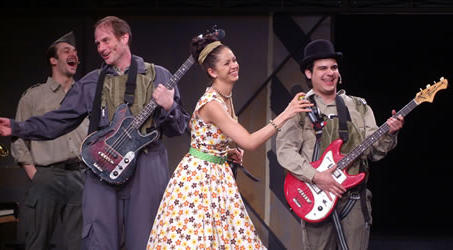 The remarkable drama If a Thousand of Clarinets opened the Prague theatre Divadlo Na zábradlí in 1958. The original text resembling children’s folding picture-book due to its free sequence of sketches and songs was later reworked into a film libretto, completed with new songs and resulted in a film made in cooperation with the leading artists of that time. Charming poetry by Jiří Suchý and popularized melodies by Jiří Šlitr put together famous songs such as Tereza, Babeta who went abroad, Captain drawing his ship up on a floor, Lost Ball, Competition in the Opera...

The Brno adaptation strengthens the action as well as revue tendencies. It includes songs which were not originally in the Clarinets and are not related to the action.

But they are so famous and popular that it had its meaning to include them in the play and let them sound. Naturally, their insertion is prefaced with a clear deviation from the dialogue, and so the performance approaches a revue, similarly as with the definitive relieving due to neglecting the anti-war theme. “If nothing else, you will sing with us all the beautiful dry Šlitr’s songs...” the Prologue says.

The unification of the musical ensemble with operetta under the Brno City Theatre turned out quite fine. From the dramatic point of view it is nothing extraordinary, in spite of that Miloslav Čížek amuses as a charming lover of good music, colonel Helmut attracts attention as a sad clown, Tomáš Sagher as obstinate lieutenant Klaus, Milan Němec as slightly affected star Benjamin, Zuzana Kyseľová plays the part of dedicated journalist, and Karel Janský acts fainting general Šlus.

Every return to the theme idealized like this is not only a bet on the sure favour of audiences, but also a bold experiment whether to conceive the work in its original Semafor appearance, or to imprint one’s own look into it. The Brno City Theatre (MdB), which put the premiere on the stage at the first of May eve as a bonus for an audience, mastered this conflict honestly: it does not turn away from the expected traditional form, but it does not copy what cannot already be copied after four dozens of years. The Brno producers brought up their own form which bears a clear manuscript of this scene, but perceives the heritage of the pair S+Š (Suchý and Šlitr) as a necessary base without unnecessary deviations or modernizing transformation.

Directress Jana Kališová perceives the title as an initial attribute from which she draws for her own vision in the dramatic concept of Jiří Záviš – her vision is related to the humorous level of Suchý’s texts, but does not only copy them cheaply. She avoided the danger of almost notoriously descriptive character of the film version. She sometimes rather approaches a modern caricatural stage contraction on a slightly revue level (sometimes rather a spoof type of modern farce of Pavel Kohout’s plays). However, the end approaches Werichian conclusion - wise, but not overloaded with ideas. Entertainment is united organically with sensitively audacious philosophical substance. The finale differs most sharply from the film version – and it is good: it is a sensitively perceived antiwar memento for the present. The performance offers slightly nostalgic memories to audiences. Although two dozens of music numbers, including the popularized hits such as Tereza, Babeta, Captain, a Stray Ball and others sound differently (sometimes too much!) from the introduced archetypes of interpretation, but they are connected perfectly in their entirety. The Brno version differs moderately from Prague versions, but it does not matter. The new version is alive and substantiated. In its composed sequence it looks solid, like a playful show resembling distantly Moša’s imaginative transcription of Hašek’s Fates of Good Soldier Švejk.

In the newly designed choreography by Lucie Gančeva individual figures and supers change with the speed of action: the action develops continuously – like in a cabaret. But it is not just a shallow spectacle: it is a solid stage drama without superficiality. Kališová does not subject the traditional form to a fashionable transfer of musical substance to the form of a rock opera, but she respects the principle of genre as an elemental base. The supernumeraries united with solo performances create the building principle of the evening most distinctly.

The performance is perceived like a collective harmony: distinctive personalities are just marked parts of the whole (In Prague musicals, stars are sometimes underlined for commercial reasons). In spite of this, let me remember the protagonists of the Saturday premiere. TV newswoman Tereza endowed with charm and sex appeal was acted by Ivana Vaňková, very successful lieutenant Klaus was played by flexible Tomáš Sagher. Jana Musilová used perfectly her excellent opportunity – her sergeant Stella is played on several levels after a little awkward introduction. While she is better in dramatic scenes in the first half of the performance, she mastered the second half with colourful vocals resembling sometimes unforgettable Ljuba Hermanová. In the second half of the spectacle, the pair of parachutists Alan Novotný and mainly Igor Ondříček mastered their parts brilliantly; they were warmly accepted by the audience imitating Suchý and Šlitr in their cancan number, the former in a boater and the latter in a bowler.

The group of soldiers, with precise motions and expressions, looks perfect as a whole; mainly Jan Apolenář (Apík), Petr Brychta (Hubert), and Stano Slovák (Nikolas) endow their figures with humorous exaggeration par excellence. And not only them! For example, the performances of fannies in blue uniforms from little girls up to teenagers are enchanting.

Invitation to a Theatre – If a Thousand Clarinets

The musical “If a Thousand Clarinets” was put on the dramatic scene at the turn of April and May. I would like to write that it is a classical musical, but – although the Brno version comes naturally out of the three former versions by Jiří Suchý, Jiří Šlitr, and cooperating Ivan Vyskočil and Ján Roháč, (1958 Divadlo Na zábradlí, 1964 a film version, 1980 Semafor Theatre) - Jiří Krnovský created a musical concertina book, absorbing elements from other plays of the Semafor theatre, or works by Jiří Suchý. Thus, these “Clarinets” must be understood as an original work which will perhaps live to see its “classicism”.

Jiří Suchý was present at the first night on Sunday 1st May. Although he does not like similar “gap-fills”, he did homage to the authors and expressed his complete satisfaction. The musical was directed by Jana Kališová, music was rehearsed by Karel Cón and Igor Rusinko. The performers mastered brilliantly their dramatic as well as singing parts. The TV staffer was played by Zuzana Kyseľová, lance corporal Patrik by Petr Štěpán, singer Benjamin by Petr Gazdík, parachutists by Robert Musialek and Jiří Ressler, commander Helmut by Ladislav Kolář, TBC director by Milan Horský, general by Karel Janský, Stella by Jana Musilová, corporal Majzy by Jan Mazák (alternating with Jan Apolenář, but as Apík). The Choir of Children of Innocent Throats and the vocal and dancing group Five Plums (choreographer Lucie Gančeva from Bulgaria) did not fall behind. Miloň Kališ created the scene of a secluded garrison, Jan Růžička designed costumes for an indefinite period of time. The fresh and chill-out pop-up picture book “If a Thousand Clarinets”, which is not a copy of Semafor performances but an independent performance, which is more than good, will attract audiences for a long time. At least Jaroslav Parma thinks so.

It was surely a surprise for many theatre-goers that this musical appeared in the theatre plan of the dramatic scene. But the performance is played on the smaller stage using maximally its space and is not static. The scene designed by Miloň Kališ is used to the last millimetre. Besides watching the action on the stage, an alkaline show can be seen in details on the projecting screen. The projections including additional shots by Dalibor Černák enhance the artistic experience. The central pair of the evening is Patrik acted by Petr Štěpán or Ján Jackuliak and Tereza N. acted by Ivana Vaňková or Zuzana Kyseľová. The pair of parachutists (Alan Novotný, Igor Ondříček) will shower you with humour, the group of diversionists changing into the vocal and dancing group Five Plums (Helena Plecháčková, Evelína Jirková, Eva Jedličková, Mária Lalková, Jana Glocová) will bring grace into the play, Stella acted by Jana Musilová looks like a hurricane on the stage. It can be said that the Brno Clarinets will charge you with energy. However, it is difficult to say whether this is due to the classical hits, Krnovský’s and Kališová’s dramatic adaptation, or the synthesis of both the elements. Anyhow, it is a brilliant dramaturgic move (Jiří Záviš). And I would not wonder if there were a thousand repeats.

The premiere of the musical If a Thousand Clarinets was held in the Brno City Theatre on 30th April. The extraordinary recreational performance arose on the basis of the homonymous film and several dramatic adaptations.

The story directed by Jana Kališová goes on in front of the eyes of spectators, filled with well-known and less known songs written by the couple of authors Suchý-Šlitr.

A grandiose performance was presented by Jana Musilová acting Stella. She gave a witty and sensitive picture of the contradictory character of nymphomaniac singer. However, Stella experiences a transformation. She becomes a marvellous singer in the revue and charms also famous Benny. Her performance is brilliant as for her dramatic art as well as singing and her scenes belong to the most shining places of the whole performance.

If a Thousand Clarinets is another Brno musical proving that high level performances can be put on without stars well-known from mass media and without detriment to quality. This exceptional performance is charged with songs by Suchý and Šlitr like Babeta, Tereza and others and you can sing them along with the actors. This is another Brno performance which is worth seeing. 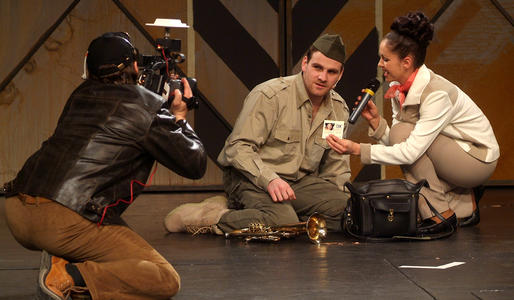 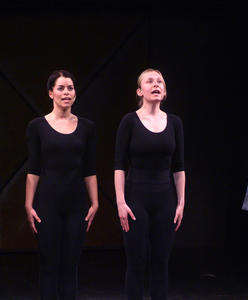 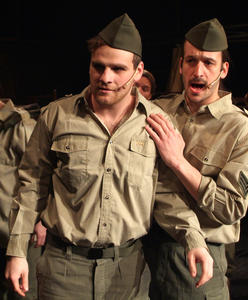 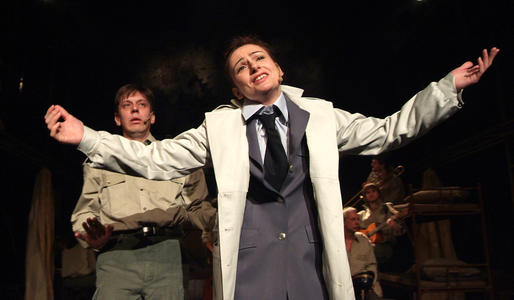 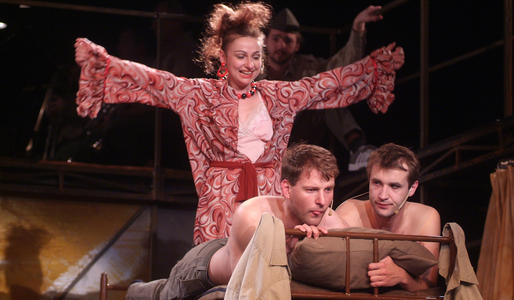 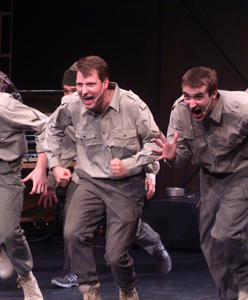 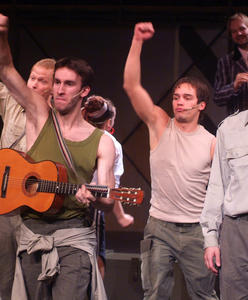 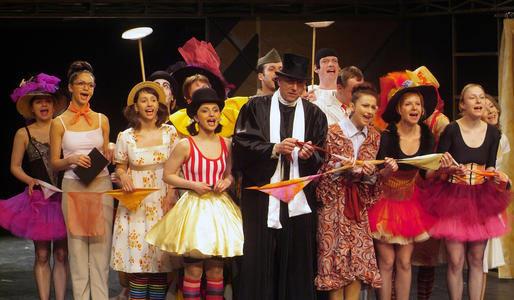 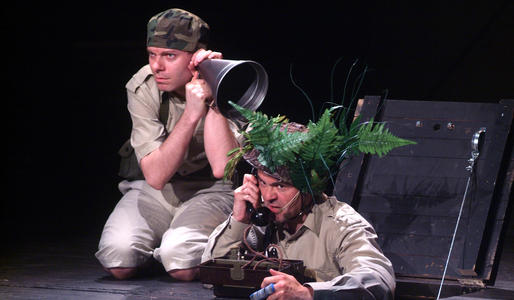 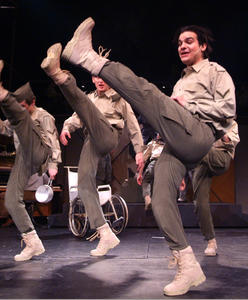 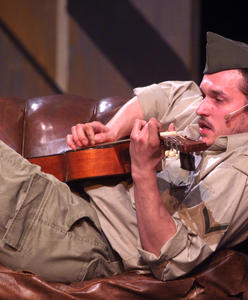 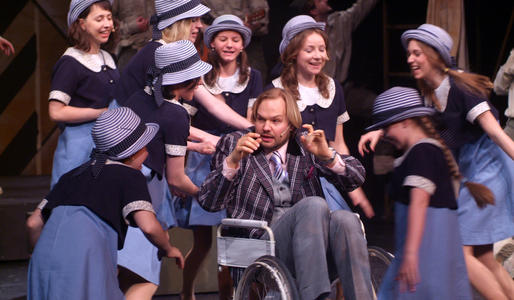