A detective comedy with several endings

This play by German-speaking author Paul Pörtner comes from the 1960s and is a popular piece at many theatres. The first version of Shear Madness was shown in Boston for more than twenty years. It is an original crazy comedy which enables theatregoers to influence events and decide on the further course of the story. The play mixes thrills and entertainment perfectly and offers the audience an unforgettable experience as they become direct witnesses to a murder which they later have to testify about before finally also convicting the killer. The story takes place at the “Shear Madness” hairdressing saloon where random as well as permanent customers come to have their hair cut as well as have a chat with the somewhat distinctive staff. The atmosphere changes when the piano on the first floor stops playing and a crime is committed...

WHEN THE AUDIENCE SEEKS THE MURDERER

(…) It is obvious that all of the participants approach the unusual text, which abolishes the imaginary fourth wall and gets the audience involved, with the necessary team spirit, enthusiasm for acting and (so far) also a sense of disciplined cooperation that doesn´t exclude differing improvisations but which shouldn´t slip into ingratiating parody. The balanced cast, wearing appropriate costumes by Barbary Wojtkowiak and supported by background music from the composer Jiří Hájek, managed to portray their believable characters inventively and with distinctive voices, movements and facial mimicry. With inconspicuous but carefully considered directorial input, it was possible for the show to maintain a logical and stylistically compact whole of slightly changeable length. (...) It isn´t easy to create an artefact which is so heavily based on improvisation and direct cooperation with the audience. It is Isteník´s lieutenant who has a great impact on the fact that even a performance with vigorous input from a gleeful or provocative audience doesn´t totally disintegrate into anarchy. He reacts quickly as a presenter, leads the interrogations, sets investigative tasks and tells his keen helper Vojtěch Blahuta what to do. Despite the twists and turns of the plot (and all their possible different interpretations), with the uncommon cooperation of all those present Shear Madness always finds the right one from the three potential criminals, and thus also achieves a form of entertainment which varies across all reprises but is always intelligent (and is perhaps almost something of an “extreme sport”).

(…) Shear Madness is an original crazy detective comedy whose development and conclusion is greatly influenced by the audience. The play mixes thrills and entertainment, and in fact, every reprise is something of a premiere. The audience is a direct witness to a murder which they subsequently have to report on and then convict the perpetrator. In my opinion, the most interesting fact about this interactive performance is, apart from the humour, its somewhat sadistic nature – the spectators are entertained by way the characters are made to “stew in their own juice” when asked spontaneous questions; the actors playing them also have to respond immediately to the reactions of the spectators, which are really unpredictable. In this sense, Mikoláš Tyc´s production is an original opportunity for the sextet of actors, out of which the most successful is probably Radka Coufalová as the foolish hairdresser Barbara, as well as the two customers played by Vojtěch Blahuta and Michal Isteník, who turn out to be policemen in the end. It was very clear during the premiere performance that this unusually interactive play went down well with the audience. (...)

(…) Mikoláš Tyc and Jan Šotkovský have created a colossal success in Brno’s Shear Madness, where a renowned hairdressing saloon is run by the camp and openly male-oriented Tony Řezníček and the moderately promiscuous Barbara Marková. In their salon, two real clients (an antiques dealer and a lady from the higher society), both of them with an IQ of around one hundred, meet two other men – who are, as is revealed later, detectives in disguise. (...) The genius of the double text transformation of Shear Madness remains that it is the spectators that decide who the murderer is. Some of them ask such clever questions that I suspect the theatre of prearranging matters. And of course, the other important thing is that Radka Coufalová and Igor Ondříček (hairdressers), Markéta Sedláčková and Rastislav Gajdoš (real clients), Michal Isteník and Vojtěch Blahuta (pretend customers) all play their parts with great skill and panache.

THE MOST AUTHENTIC HERE AND NOW

(…) also at Brno City Theatre it is the good acting performances that make what is practically the only play by the author a success. (...) Igor Ondříček plays the most cheaply characterized of the protagonists, a permanently horny gay hairdresser, and then there’s Markéta Sedláčková as a talkative snobbish lady, Radka Coufalová as a not very bright hairdresser and Rastislav Gajdoš in the role of a superficial gangster. However, Vojtěch Blahuta and mainly the irresistibly fast-reacting Michal Isteník get involved, along with the unpredictable spectators, of course. Suddenly, instead of just viewing a silly detective story we find ourselves taking part in a stand-up comedy charged with the pure adrenalin of total improvisation. From that moment on, the performance is truly authentic, evolving in the here and now far more directly than, for example, what happens in the Na stojáka programme. This is exactly what’s worth seeing about Pörtner´s play. (...)

THE SPECTATORS ALSO GET TO JOIN IN

(…) Shear Madness has the subtitle “a detective comedy”, but it isn´t at all like one of those black comedies in which one’s laughter can suddenly change into a chilling grimace. (...) The secret of this play’s success lies not only in the quality of the acting by those on stage, but also in their improvisational abilities. The six actors play with the text as well as the situations that arise masterfully, and it is obvious that they enjoy the play themselves. Laughter in the auditorium is almost permanent. Igor Ondříček played an extravagant character with features of what is these days an almost fashionable minority, using his own inventiveness, words and movements, and was received with great enthusiasm. The female duo also acted with bravura. They reacted with apt wit to the accusations or unpleasant questions of the spectators, offering the most varied displays of disagreement, disapproval or offence. Radka Coufalová’s jolly hairdresser managed to react to mistrustful spectators very promptly and with feeling. (...) Mrs Schuber, a lady from higher society, was played by Markéta Sedláčková. This nicely written comic character alternated between the blasé expression of her world view from the heights of her social standing, and vulgarity and demonstrations attributed to servants. Her mimicry and pantomime reactions to nosy questions evoke frequent laughter. (...) Shear Madness entertains with a great portion of laughter and relaxation. It will also be appreciated by those who like to laugh and but don´t usually go to the theatre. The show is written as well as staged excellently. The involvement of the spectators isn’t forced. (...) They are pulled into the play naturally as witnesses who can but don´t need to take part. However, people mostly enjoy playing and Shear Madness at Brno City Theatre confirms this.

(...) Karel Čapek’s unchanging stage set, which depicts a modern hairdressing salon, accompanies the audience throughout the whole performance. It is almost hypnotic in the way it draws the spectators´ attention to the salon where the action is set. Its doors are slammed to emphasize emotions, there is the unrelenting sound of the piano, the beating of a hammer on pipes can be heard and both strong words and the blades of scissors flash through the air. Every now and then, a melody from the “radio” can be heard presenting the theatre’s musical creations in an unobtrusive and witty manner, or the phone rings as local actors call to make appointments for haircuts, etc. The setting of the plot in the environment of a Brno theatre emphasizes the humour of the story even more and promotes a closer relationship between the actors and the spectators. At break-time, when the police stretch a tape around the stage, it is entertaining that spectators are free to have a “chat” with the main investigator in the corridor and share their observations. (...) It is very hard to choose who’s best out of the sextet of actors (thanks to their balanced performance). However, perhaps Igor Ondříček as the extravagant hairdresser Tony is the most suited for his role because of the wit with which he plays his part, his amusing gestures, the colourfulness of his role and the skill with which he improvises. The rest of the team supplements him very skilfully. Markéta Sedláčková is a posh lady without noblesse who doesn´t hesitate to steal a bottle of perfume as well as to philosophize about life in higher society. Rastislav Gajdoš, with his bizarre arrogance, probably gets the least favour from the audience, though he doesn’t seem too bothered about it. Radka Coufalová in the role of the hairdresser Barbara has no problem with balancing between reality and lies, and then there are the customers and policemen in one – Michal Isteník plays the “Protect and Serve” role as investigator Rosický together with Vojtěch Blahuta as his young and enormously active but inexperienced colleague Veverka. This story with a large degree of improvisation tests the brittle connection between the spectators and the actors, who move freely around the stage as well as the auditorium. The aim is not to get caught out, which the cast do very well. (...)

The first part of this detective comedy isn´t bad at all. Something is happening up on stage all the time, there are various allusions and jokes that mainly involve the current situations in Brno that people like to laugh about, and the actors have fun messing around. However, it is when the crime has been committed and the police ask the spectators to help out and be witnesses that the real fun starts. The suspects dodge and weave in various ways, the spectators inform on them and make accusations, the suspects improvise their reactions in some way or another and everyone starts to enjoy themselves. There’s a difference between “just” reciting a text, bowing several times at the end and going home, and reacting to unexpected developments or replies while coming out with witticisms at the same time which also fit the play and your character. (...) It is nice that each of the characters could be the offender. Radka Coufalová displays a sneaky kind of cunning, while Igor Ondříček is an irritable hothead, Rastislav Gajdoš plays an arrogant repeat offender and Markéta Sedláčková is a posh kleptomaniac. All of them have a motive for the crime and the opportunity to commit it, and nobody has an alibi, though there is no clear evidence pointing at any of them. There is a vote at the end where the audience can decide democratically who will be getting not into the Senate but into prison. In a dramatic climax, the suspects all accuse one another and it becomes clear that the offender really is the person the spectators voted for. (...) 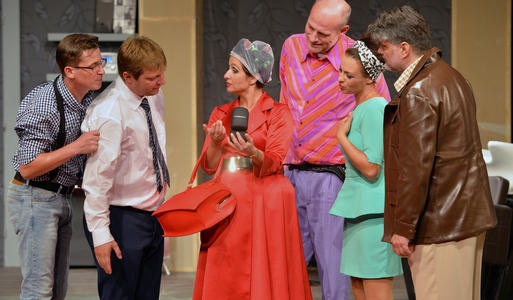 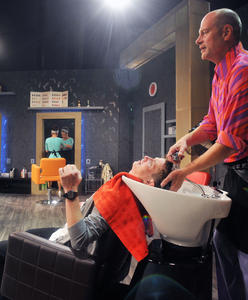 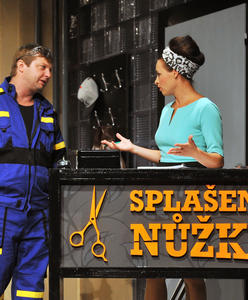 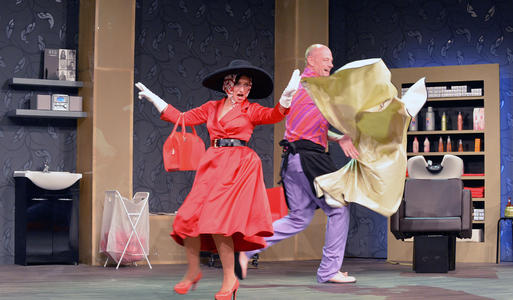 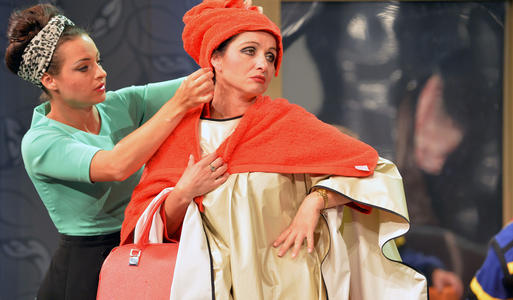 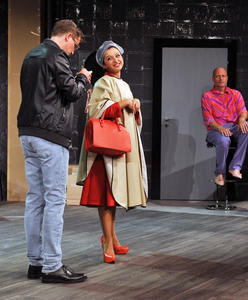 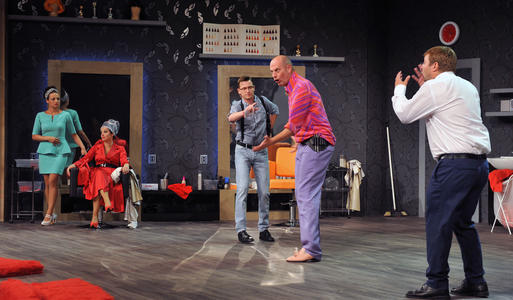 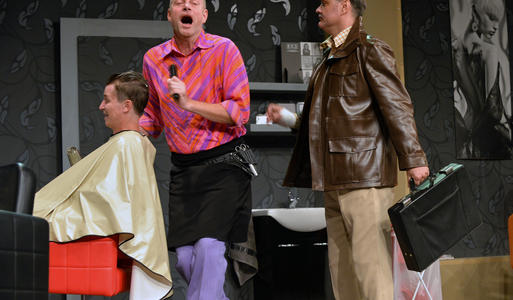 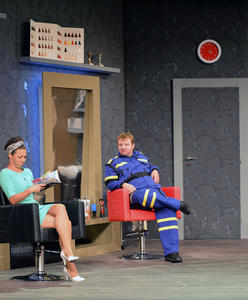 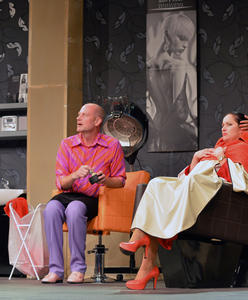 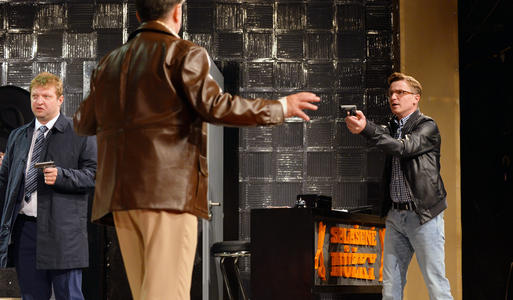