or the Horse Opera

The whiskey song and many other tunes and great texts which have found their way into the hearts and minds of the Czech people make Lemonade Joe the king of Czech comedies. The journalist, writer, cartoonist, screenwriter and director Jiří Brdečka wrote a series of short stories for the magazine Ahoj na neděli in 1939 – 1940 for which he drew on his great interest in the Wild West. He created the character of Lemonade Joe – an ideal man of the West who drinks lemonade instead of whiskey and strictly adheres to the moral high ground at all times. In March 1944, the smiling and honest gunfighter appeared on the stage of the Větrník Theatre as the main character in a new theatre play. However, it wasn’t until 1964 that his search for a cocoa stain of the size of a Mexican dollar was finally immortalised in a film version directed by Oldřich Lipský.

The main roles in this timeless film parody are played by Karel Fiala as the blond hero and Miloš Kopecký as the greatest of the villains, a man who isn´t afraid to dishonour innocent girls. This film, set in a small town in Arizona in 1885 where everyone likes to get together in the local saloon and listen to Arizona singer Tornado Lou, was seen by more than four and a half million cinemagoers! Since that time, it has regularly appeared on TV screens and also at theatres. Audiences will now have the opportunity to hear the songs which Karel Gott and Yvetta Simonová sang in the film delivered live by our leading actors. The western musical parody Lemonade Joe has ruled the Czech comedy hall of fame for a long time.

This weekend, musical comedy Lemonade Joe was on at Brno City Theatre. Their large Music Theatre stage saw the return of one of the most popular post-war heroes of the Czech stage, who first appeared in theatres in 1944. It was the 1964 film that brought the piece immortality, but don’t expect to see a carbon copy of the movie here. Not only does the theatre version offer many more songs, but its plot also differs at certain moments (and in its ending) from the exceptional celluloid version. The new musical show by director Petr Gazdík is a free-flowing adaptation that doesn’t dwell on references to the famous film. Instead, thanks to its original humour and the way it’s used, the show beats a path through a forest of popular quotes from the film (which just have to be there, naturally) to become a legitimate and novel theatrical version of the material. The resulting production aims to appeal not only to the older generation, for whom the teetotal westerner is an unimpeachable legend, but also younger theatregoers and fans of the theatre’s musicals. Gazdík has gone about this in a way that’s all his own. He’s sneaked in a choreographically impressive reference to Jackson’s famous moonwalk for younger viewers, together with a snatch of music from the king of pop, and there’s a contemporary dance number.  (…) Don’t worry, though, this is no fundamental, iconoclastic reinterpretation of the work that the Czech people have loved for 70 years.  (…) The audience will get their fill of gunsmoke and the atmosphere and clothing of the Wild West. It’s just that everything is done with the emphasis on theatricality. (…) Gazdík has deliberately led the ensemble to perform with a simplified, tense, almost operatic acting style. Lukáš Janota’s Lemonade Joe is an all-round good guy, and the actor never steps back to make comic comments about the flawlessness and liquor aversion of his character – he plays Joe straight right to the end. The innocence of Winnifred (Ivana Odehnalová) is also taken to an extreme, though it isn’t a simple portrayal of a saintly blonde who’s always childishly rolling her eyes. Horace is played by Viktor Skála (with a waxed moustache) as one of those movie villains you love to hate, with malicious craftiness that reaches the realms of the grotesque. (…) Everyone just acts with verve yet without overdoing it, and it must be said that it all works together very well. Gazdík’s witty theatrical and musical asides don’t disrupt the flow, but rather serve to knit everything together organically, probably because they’re not overused. The director seems to have got the balance just right. (…)

(…) If someone was looking forward to seeing an exact copy of the film Lemonade Joe, they might have come away feeling a bit disappointed. The production went conceptually beyond, or rather above, the framework of the movie. (…) Of course, you’ll hear all the famous songs and quips you know and love, but there’s a whole lot more, particularly in terms of songs which were left out of the original movie. (…) These are unknown to today’s theatre audiences, and they’re lovely. Goodness knows why they didn’t make it into the film. (…) The director, Petr Gazdík, together with Petr Hloušek, who designed the functional set and prepared the animations, made full use of a peephole set with a view into a big saloon, which thanks to projection equipment and several transparent surfaces could instantly be transformed into a desolate prairie or a cemetery. The preparedness of the actors, including the song and dance company, was at a high professional level. A great part of the success was down to the choreographic work of Lucie Holánková. It’s not easy to play the main character when theatregoers still have Miloš Kopecký’s wicked scoundrel Horace fresh in their memory. At the premiere we saw the role played by the experienced Viktor Skála, one of the theatre’s most eminent performers. He didn’t resort to copying the famous film Horace, preferring to give the role a personal touch while maintaining the required level of Western badness.  (…) His captive was the fragile Winnifred, played by Ivana Odehnalová. (…) She was as brittle and vulnerable as in the film, but more believable than Ola Schoberová’s beautiful but slightly puppet-like version of the character. Lukáš Vlček’s Dough and Martin Havelka’s worried father Honesty were fully-fledged characters that were portrayed just as well as in the film, if not better. Another role worthy of comparison was that of Tornado Lou, played in the film by Květa Fialová. Once again, the theatre showed that it isn’t necessary to copy in order to create attractive characters. One of their best actresses, Ivana Vaňková, took on the role with crazy, energetic feeling, portraying Lou wonderfully. (…) We have left the titular character, Lemonade Joe, till last. (…) With Lukáš Janota (and surely thanks to Petr Gazdík’s direction), Brno City Theatre’s Joe has gained another, almost Chaplin-like dimension. The grotesqueness of the impressively large, non-alcoholic gunslinger’s clumsy stumbling movements constantly undermines the impression he would otherwise make. The lampooning of size always gets audiences laughing, and the director managed to make use of this with several characters in a great many situations. (…) 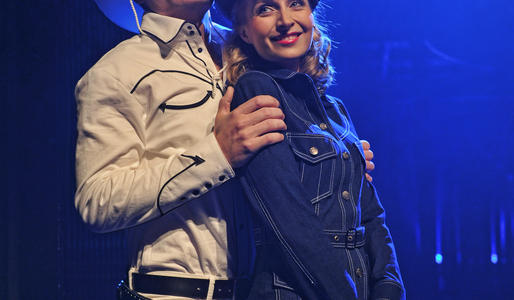 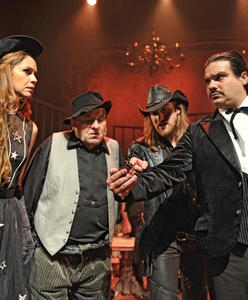 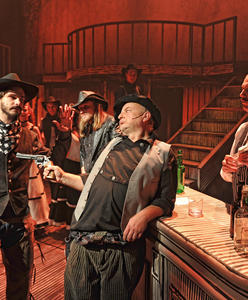 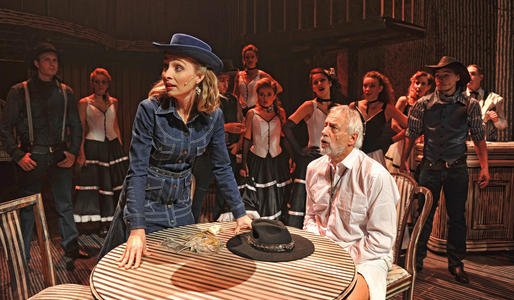 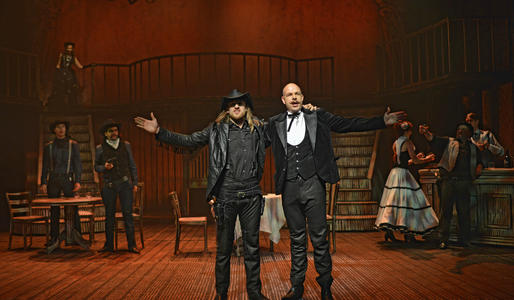 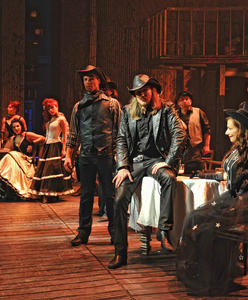 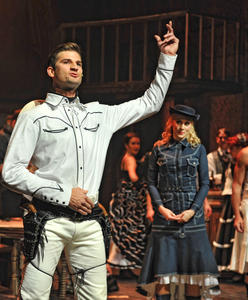 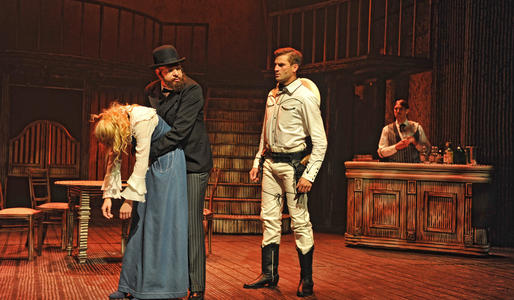 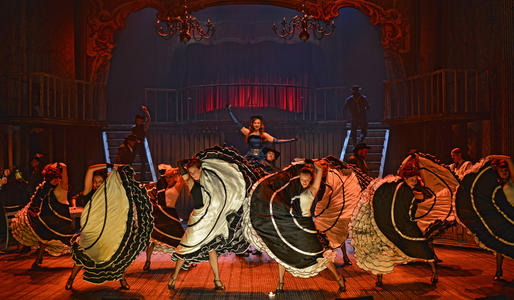 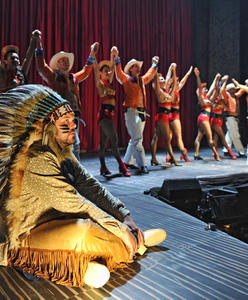 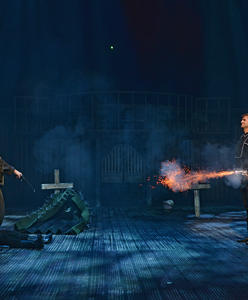 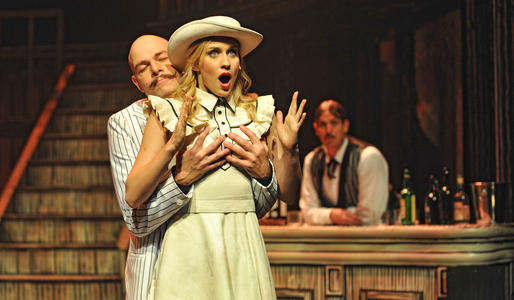