VIKI IS WALKING TOWARDS HAPPINESS 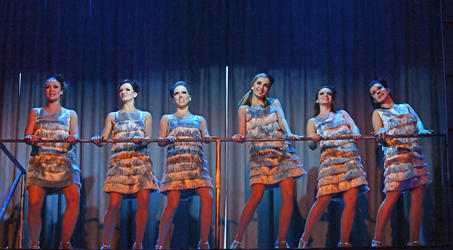 Viki Bouzková could be happy – she has a contented marriage, a loving husband and a beautiful daughter. But Viki isn´t happy... while her husband Láďa wants just peace and quiet, Viki longs for excitement, fiery passion and strong emotions. In other words, she wants “a man with spirit”. Such a man is Marek Bašta, a popular singer and saxophone player, who falls in love with Viki at first sight. He climbs up a downpipe to meet her at night, and invites her to decadent parties with his band, Sex-tety. Viki feels that Marek is the right man for her, one who has finally brought her life the excitement she’s been longing for – even though her friends, daughter and even Marek´s ex-lover are trying to talk her out of him... The doyens of Brno Music Theatre, Milan Uhde and Miloš Štědroň, have come out with something completely different this time, after a trio of adaptations of classic literature pieces written for our theatre (Nana, The Red and the Black, Wild Bára) – Viki is Walking Towards Happiness is a playful, inventive contemporary comedy in the form of a swing musical.

VIKI IS WALKING TOWARDS HAPPINESS (…)

(…) The rotating stage by Tomáš Rusín smoothly takes us back to the grey 1970s, to the dark days of normalization. We start off in front of a tower block which is buzzing with life. When the other side of the circular stage is shown, a completely different world appears before us – the world of cabarets, late night bars and Marek´s arty apartment. These two contrasting locations are completely sufficient for this story and are enough to satisfy the imagination. The 1970s atmosphere is filled out by the costumes from Zuzana Štefunková-Rusínová´s workshop, which are thematically appropriate to the plot. Jaroslav Moravčík´s inventive choreography also makes a valid contribution, particularly when larger groups are involved. This can be seen particularly in the dancing and singing performances by the high rise inhabitants or the all-girl sextet Sex-tety that accompanies a famous jazzman, singer and saxophonist at his concerts and performances. The music was produced by experienced Brno musical author Miloš Štědroň together with Brno City Theatre’s composer and leading author Karel Cón. The musical component is mainly made up of swing, blues and jazz melodies, which the excellent local orchestra plays with great enthusiasm. (…) Viki is played by Lucie Bergerová, who dominates the production with her acting and most of all her singing. Her confidence while singing (and otherwise) and naturalness attract deserved attention. She puts on an excellent performance that will certainly please the crowd. Petr Štěpán seconds her brilliantly in the role of the wild man and local star, Marek Bašta. Playing a Bohemian dandy and breaker of women´s hearts suits Štěpán to a T, and audiences are sure to love him in the role. Viktória Matušovová doesn’t disappoint either as Bašta´s abandoned and jilted lover Malášková; every role she takes demonstrates her high quality singing potential. Jakub Przebinda plays an omnipresent parrot, bringing a dash of humour to the show. And of course, the sextet of singers from Bašta´s cabaret, the Sex-tety, spice up the story. (…)

The retro musical comedy Viki is Walking Towards Happiness which premiered at Brno City Theatre is in many ways a trip into the past. It takes the audience back to the works of Milan Uhde and Miloš Štědroň´s artistic workshop, now supplemented significantly by composer Karel Cón. On top of that, it is also an excursion to a real story which took place at the end of the 1960s and the beginning of the 1970s, and to the swing music which ruled in the sweet sixties era. (…)  Uhde´s heroine of the piece is Viki, a thirty-five-year-old settled woman with a fifteen-year-old daughter. Bored by her everyday marriage and her kind husband, the attractive Viki suddenly falls in love with a charming jazzman and leaves her family for him even though everyone around her tries to talk her out of it. (…) In the musical Viki is Walking Towards Happiness, a real story from the beginning of normalization is set to the tones of jazz and swing, with a bit of rock ´n´ roll thrown in. I have to say that it was Cón´s music in particular that made the viewer’s journey back in time a very pleasant one. Quotes and motifs from Glen Miller’s famous, immortal jazz hit In the Mood keep cropping up amidst the authors’ flood of inventive, relaxing, self-penned music, and they support the whole swinging tone of the musical well. The show also appropriately offers up several blues numbers, showcasing the music which directly inspired jazz, ragtime, rock ´n´ roll and rock. One of the highlights of the evening is (as is traditional) the capable and rich-sounding orchestra under the leadership of Dan Kalousek (…) Lucie Bergerová coped excellently with the role of the main heroine and avoided turning Viki into a caricature of a romantic, suffering, excessively sweet woman in pursuit of her dream man despite his many deficiencies. Bergerová sang perfectly that evening, but she wasn’t the only one as Viktória Matušovová also shone in the role of discarded mistress and cleaner Malášková. The young musical actress did a good job of building up the character of a vengeful woman who has basically only been exploited throughout her life. She attains almost demonic dimensions by the end, when she was reminiscent of the ancient Erinyes. Her last solo was real experience for the audience, full of vocal and dramatic emotion. As far as acting is concerned, Petr Štěpán was great in the role of Bašta, a philanderer who’s fallen in love. (…) The choral performances were excellent as usual, and that goes for both the Sex-tety and Bašta´s abandoned women. Praise should also be found for the highly creative, pulsing choreography by Jaroslav Moravčík, who turns Viki is Walking Towards Happiness into something like a dance musical in places, offering fast-paced and inventive numbers. Zuzana Štefunková Rusínová brought out the period atmosphere with her costumes, while the set by her husband Tomáš Rusín utilizes outlined 2D comic-book effects. (…)

VIKI IS WALKING TOWARDS HAPPINESS: ANYONE CAN FALL CRAZILY IN LOVE, WHATEVER THEIR AGE

The author of the script, Milan Uhde, is highly skilled - he wrote all of it in verse. He is so skilful, in fact, that he needed two composers (Miloš Štědroň and Karel Cón) to set it to music. They were similarly magnanimous and provided music for almost everything, and thus if we consider the short spoken parts as sui generis recitative, we have a swing opera instead of a musical. (…) I mustn’t forget the director, Juraj Nvota, who came up with a lot of great ideas. (…) As Viki, Lucie Bergerová practically doesn´t leave the stage, and her singing, dancing and acting are all first rate. Petr Štěpán seconds her well as a man with a twinkle in his eye, and how could it be otherwise, as he doesn´t have to fake the twinkle. Viktórie Matušovová overflows with spurned hatred in the role of a “cleaner” who is in actual fact the skirt-chaser’s most recent ex-partner, while Aleš Slanina plays a dry sexologist striving to present himself as a man of the world (…) It isn´t bad at all to take a break from the present time and go back to the 1960s, with those nutty fashions: miniskirts, backcombed hair, bell bottoms, tight jackets with wide lapels and men with long hair. And to return to those concrete tower blocks where you all live communally as there’s no other choice due to the insufficient sound-proofing of the walls and ceilings. Back to a period when only a few people can afford a car, so a family ends up travelling by motorbike and sidecar… well, isn’t that just crazy in itself? 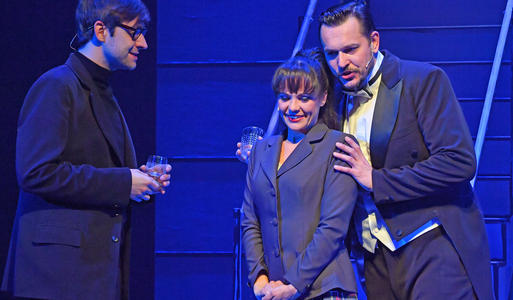 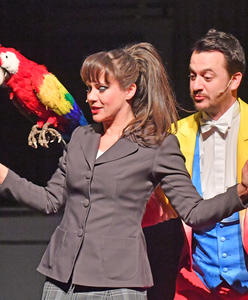 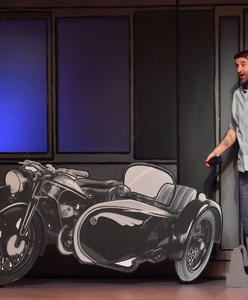 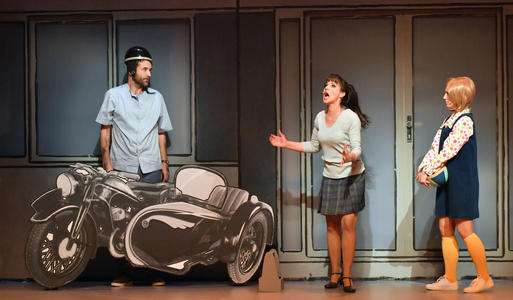 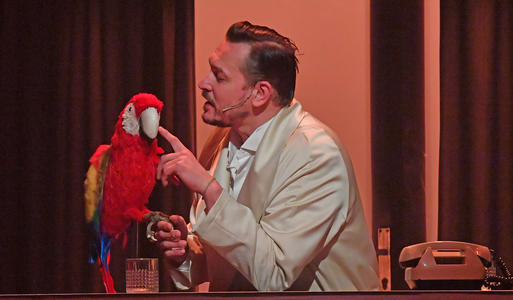 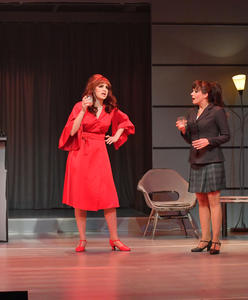 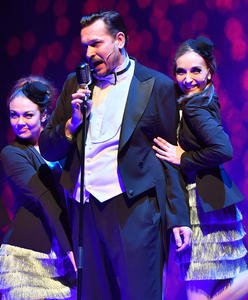 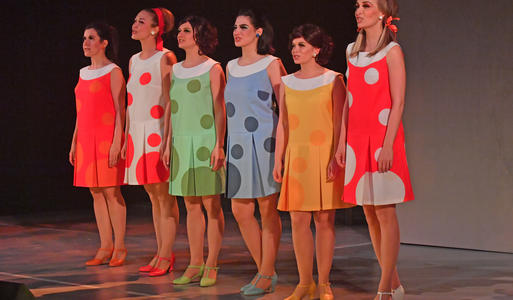 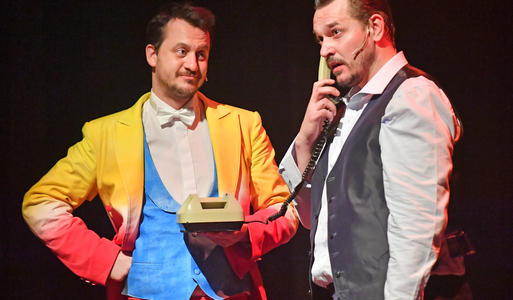 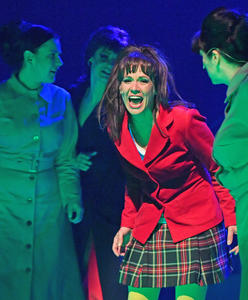 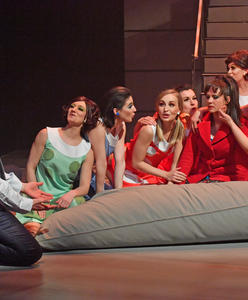 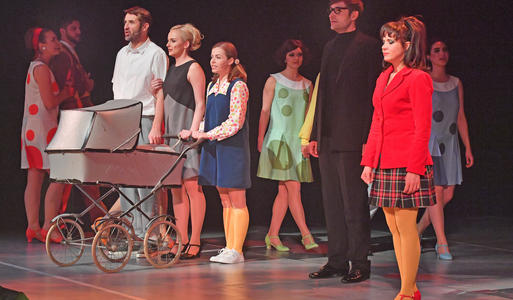