A drama about magical women

When Brno author Kateřina Tučková’s novel Goddesses of Žítkova (Žítkovské bohyně) was published in 2012, it was the literary sensation of the year. The magical story, both a work of fiction and a work based on real events, takes place in the village of Žítková in the Moravské Kopanice region. It is a thrilling tale of the fates of the women of one family that reaches all the way back to the 17th century with its witch trials, and extends right up the present day. These mysterious women were gifted with supernatural powers. They knew how to heal, exorcise, prophesy, conjure up love and also curse, abilities which brought them much suffering in every period of history, though none more so than in the 20th century under totalitarianism.

The main character of the novel and dramatisation is Dora Idesová, who is the last female member of the family of Žítková goddesses, though she has not learned their arts. She has studied ethnography, and decides to write a scientific paper about the goddesses. As she searches for information about her ancestors she discovers unbelievable life stories and connections, and through them always encounters the same types of human character and behaviour, and also finds herself. Through unravelling the fates of the women of Žítková, she slowly realises that she is also part of the secret tradition, even though she has not become a goddess herself.

THE GODDESSES OF ŽÍTKOVÁ TORMENTED SOULS AT BRNO CITY THEATRE

Theatre director Dodo Gombár has written Brno City Theatre a new adaptation of the novel The Žítková Goddesses by Kateřina Tučková. (…) Gombár´s Brno production mainly stands out in its use of intersecting time frames and storylines. At the beginning, we meet fourteen-year-old Dora Idesová, who is suffering at boarding school due to alienation from her peers and the cruelty of an instructress named Hrtoňová (Alena Antalová, who was surprisingly excellent in the role, despite being cast against type). We simultaneously also watch the search of the adult (roughly thirty-year-old) Dora for her past, and the two alter egos actually meet on stage several times. The story isn´t narrated chronologically, yet is understandable if viewers are prepared to follow the action very carefully. (…) In the first half, the set is dominated by a large cage in the middle of the stage, which at first sight is a boarding school cloakroom. However, on the symbolic plane it is a place where the characters encounter evil and where they find themselves when they are cut off from the others involuntarily. The cage thus becomes a psychiatric hospital where Surmena (Erika Kubálková) is sent, or a place where Kateřina Shánělka (Eliška Skálová) is tortured. All of the twelve actresses were well chosen for their parts. The always excellent Svetlana Janotová in the role of the adult Dora hardly leaves the stage for the whole three-hour production; in her sure hands Dora is a strong yet sensitive heroine. (…) As far as the other roles are concerned, Radka Coufalová was impressive as the mysterious Janigena, and Ivana Vaňková played Dora´s mother in memorable fashion. Vojtěch Blahuta, the only male actor in the production, took on the demanding role of Jakoubek, a boy suffering from Apert syndrome. Aside from his great performance in the role of the handicapped boy, Blahuta also managed to transform himself smoothly into Dora´s father, as well as other male characters.  (…)

A NEW ATTEMPT AT GODDESSES OF ŽÍTKOVÁ

At Brno City Theatre, Dodo Gombár encountered and confronted Kateřina Tučková´s novel as a director and dramatist for the second time. (…) His take on Tučková´s story of women gifted with healing abilities and the ability to make people believe in their supernatural powers plays out on a stage set designed by Eva Jiříková. Three wooden walls are used to suggest a magical interior with the aid of four artefacts hanging on each of them – these are reminiscent of human torsos deformed perhaps by torture. The scenographer has placed a metal cage in the middle of the stage. It is both a real object and a symbol of restricted freedom. A shining quadrangle hangs suspended above the stage; it drifts down to the ground at one dramatic moment. University student and ethnographer Dora Idesová (Svetlana Janotová) is the youngest child of a wide-branching family of goddesses. Gombár’s interpretation of her journey to discover her roots and her own identity starts out as a feverish stream of scenes and dialogues. It rushes forwards, forcing the heroines to enter the story and leave it in a pompous hurry accompanied by the stomping of boots and screaming, which accentuates the feeling of conflict. Situations from the past, often narrated rather than acted, alternate in quick succession with scenes from the present. This method confronts Dora with her young self (Nikol Wetterová) and also smoothens out the seams that demarcate both time and the individual. On top of this, the director decided to assign two or three characters each to most of the cast, and to use female actors for the male characters as well, with the exception of Dora´s severely handicapped brother Jakoubek (Vojtěch Blahuta), which was perhaps also due to the fact that he persistently followed and highlighted the motif of Dora´s homosexuality. Alena Antalová thus embodies not only the educator Hrtoňová, but also her spiritual affiliate, the parson called Hofer, while Barbora Krčmová and her alternating actress Elena Trčková play the role of the Archivist as well as Dora´s classmate Klára, Kateřina Divoká and a Neighbour. Eliška Skálová lends her face to Dora’s classmate Pavlína, as well as a goddess tortured in the distant past, Kateřina Shánělka, and a Neighbour. Ivana Vaňková plays Dora´s mother and her husband and murderer Matyáš, whose part is also played by Vojtěch Blahuta for a moment in the second part of the play. Eva Jelínková is not only the goddess Josifčena but also a state police officer, Švanc, and not even Radka Coufalová (who plays Janigena) manages to escape the duty to speak and sometimes also act like a Man. Only Drahomíra Hofmanová (the godmother and neighbour Baglárka) and Erika Kubálková (Dora´s aunt Surmena) have avoided being given double parts by the director and dramatist. (…)

FROM THE TIMES WHEN THERE WERE GODDESSES IN KOPANICE

(…) Brno´s Goddesses of Žítková went for the more general approach of confronting myth and reality. (…) Evil is represented by Judas – Alena Antalová in the roles of an inquisitor, an educator, a fanatical pastor, a psychiatrist and other supervisors of that ilk that ensured the obedience of people under all regimes. But the Goddesses of Žítková healed, prophesied, did magic and even cursed with God as their shield. Thus the biblical twelve, as well as Judas, who is replaced by the thirteenth apostle after his betrayal. There is a cast of thirteen in this new version by Gombár - twelve actresses plus Vojtěch Blahuta in the role of Jakoubek, the handicapped brother of the main heroine, Dora Idesová. Dora is examining her past in an attempt to unravel the mysteries surrounding her family and to unveil some rational foundations upon which “goddessing” might be built. She is trying in vain. An offering and a crown of thorns arrive in the end: perhaps indicating the redemption of the region and the people in it? Her pilgrimage is another biblical comparison. It resembles Jesus Christ’s Stations of the Cross, which is again confirmed by Eva Jiřikovská’s magical stage set with its Calvary, each stop of which is represented by wild, crooked parts of trees from the White Carpathian spruce forests. There is also the emotionally expressed contrast of red (Antalová), black (Svetlana Janotová in the role of Dora) and grey (Nikol Wetterová – young Dora), alongside the stylized Kopanice folk costume that displays the provocative white innocence of the two goddesses named Kateřina – Shánělka and Divoká. David Rotter illustrated Gombár´s production in every way he could. Sensitive ears will hear echoes of Kopanice and the Hrozenkov region in his score, which simultaneously features ornamentation from the last century dressed up in the sounds of contemporary rock and also inspired by poetry. (…)

(…) The ancient tradition of the goddesses of Žížková, which they called “godding”, involved magical rituals with the power to heal the body and the soul, protect against bad weather or help with curses and unhappy love. This tradition had deep roots in history and was linked to the countryside of the local area and the mentality of its people. (…) Svetlana Janotová played the main role of (the adult) Dora Idesová with modesty, enthusiasm and the energy that flows from the powerful emotional streak found within the family line of the story’s female heroines. She gives an involving, believable performance which will certainly remain in the hearts of the spectators. (…) The young version of Dora is played by Nikol Wetterová, who certainly doesn´t allow herself to be overshadowed by her older colleague – her Dora is a more sensuous and wilder character than the more mature, later one. Radka Coufalová is also excellent in the role of Janigena – a mysterious, harsh but in a way inconspicuous woman from Kopanice who has a fateful relationship with Dora. Her quiet and unsettled character, wearing a hat and accompanying all the dramatic moments of the play and Dora´s life with a violin, will influence the story more than it seems at first sight. Coufalová’s Janigena is exactly the inconspicuous, quiet and yet strongly eccentric element needed to add spice to the play. The only man in the production – Vojtěch Blahuta – plays the handicapped Jakoubek with an urgency of his own in a fine acting performance. The dominating female element of the play is completed by Erika Kubálková in the role of Surmena and Zdena Herfortová as the goddess Irma Gabrhelová. On the opposite side, there are the “evil” goddesses Josifčena (Eva Jelínková) and Fuchsena (Katarína Ptáčková), who fill the story with a sense of fatefulness right up to the very end. (…). Goddesses of Žítková (blood is blood) is not a relaxing show. The almost three-hour-long performance, with its dramatic twists, plots and strong narrative, gets you involved, captures your interest and never bores. Spectators find themselves in a different world that’s governed by completely different laws. (…) The harsh realities of life in the Kopanice region, the persecution of the goddesses over the course of time, the fatefulness and rawness turn the story into something close to a nightmare. (…) Brno City Theatre really brings the tale to life on stage, and I feel that it will certainly and deservedly become one of the theatre’s popular pieces. 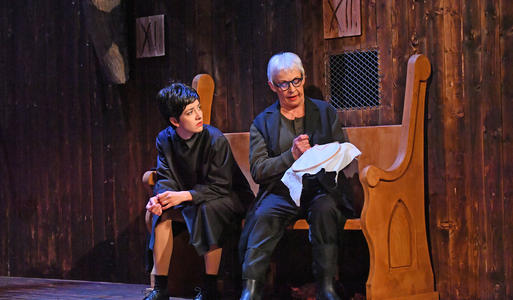 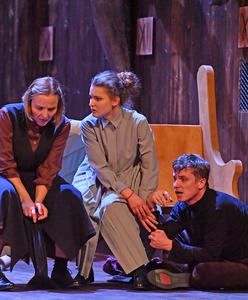 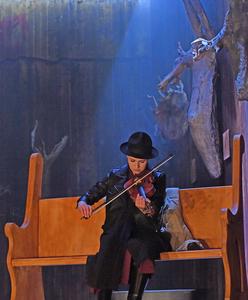 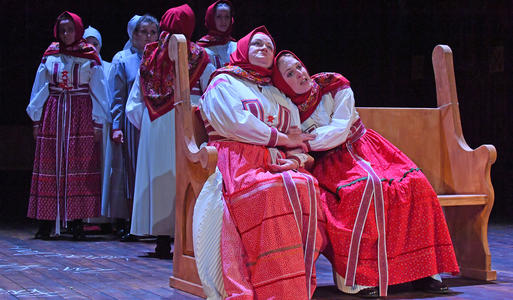 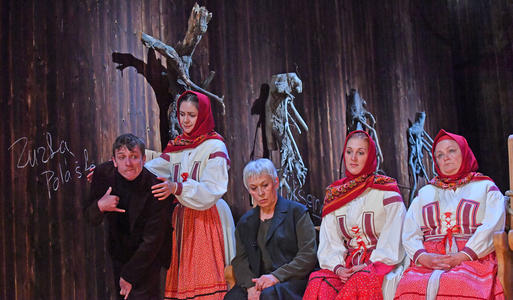 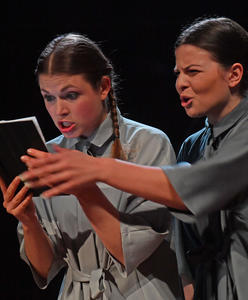 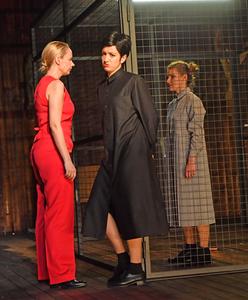 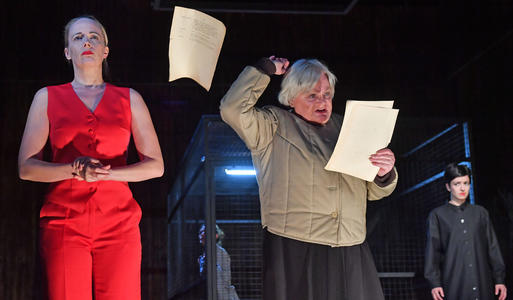 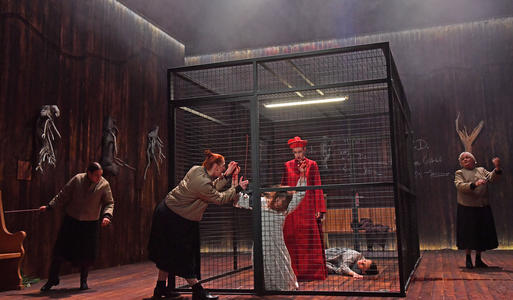 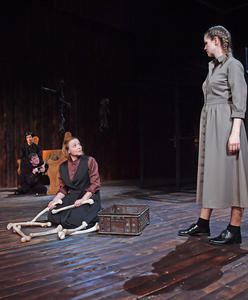 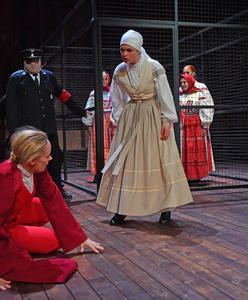 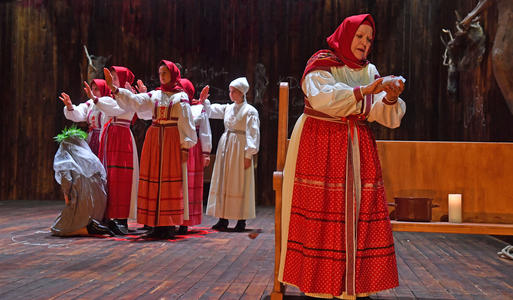