The story begins with the ordinary jealousy of a young girl rejected after trying to seduce a married man. It ends in a plenitude of gallows for the innocent and terror, hidden behind the mask of legal proceedings, which is spreading out of control...

This historical drama by Arthur Miller, one of the greatest playwrights of the 20th century, is based on real historical events. The witch trials that took place in Salem, Massachusetts in 1692 constitute one of the darkest chapters in American history. Miller wrote his story of how an innocent night-time adventure for some young girls gradually turns into a cruel and pointless witch hunt as an analogy of McCarthyism in 1950s America. However, the play still has timeless power even today, as mass hysteria, the need to assert the “one holy truth” in a totalitarian fashion and at any cost, as well as the desire to settle accounts with one’s fellows under the pretence of fighting for freedom, unfortunately exist in all historical periods and societies.

These days, Miller´s drama is considered to be the centre of the American dramatic canon and it hasn´t left the world’s stages for the sixty-five years that have passed since its creation. The role of tough John Proctor, a farmer who bravely stands up against judicial tyranny, has been played by such actors as Daniel Day-Lewis and Liam Neeson. With this production of The Crucible, a great, impressive, dramatic story has arrived at Brno City Theatre. Our ensemble is very well prepared for what will be an excellent performance.

A SPINE-CHILLING DRAMA FROM SALEM

(…) The latest drama premiere at Brno City Theatre shows how far a person can be driven by fear and escalating psychological terror of their surroundings. This version of Arthur Miller’s play The Crucible, which is based upon real events, was produced by the director Mikoláš Tyc. His modern conception of this historical story is built on a strong script and - first and foremost - upon unusually impressive acting performances. (…) In Miller´s play, jealousy leads a young girl named Abigail Williams, who is the rejected lover of an earthy farmer, John Proctor, to accuse his wife Elisabeth and others of witchcraft. The gigantic, hellish witch-hunt this act unleashes ends with two dozen people dead. Director Mikoláš Tyc aimed to push the historic context of the story into the background and emphasise the timeless messages it bears. The creators of the main theme of the story have focused on fear in its various forms, and also on the motif of a “sick” society which can completely collapse from the inside due to the presence of one simple seed of fear. (…) Petr Štěpán, with his robust manly appearance, is the perfect type for the character of John Proctor, a hard-working farmer who pays very hard for the rest of his life for his only sin: infidelity. Unlike the other people around him, he can admit responsibility for his actions and stand up against the resulting tide of fanatical, judgemental rage.  Lenka Janíková excellently embodied the typical character of the farmer’s loyal, faithful and loving wife Elisabeth, who suffers her fate with grace. The dialogue that takes place between the couple prior to the final verdict is one of the highlights of the production. New ensemble member Barbora Goldmannová mastered the difficult character of Abigail Williams, the diabolical seductress, liar and vengeful beast. Jan Mazák enjoyed playing the fanatical, all-powerful judge, Vice-Governor Danforth, who sends innocents to their deaths without blinking an eye. (…)

Brno City Theatre’s Drama Theatre performed their premiere of eminent playwright Arthur Miller’s The Crucible. (…) The trigger for the obscure and tragic event was something rather trivial, as it often is. A group of girls went dancing in the forest and participated in the cursing of one of them. It was basically an attractively mystical teenage game. (…) Two of the girls that were caught pretend to faint because of their fear of punishment. From there it was only a short step to suspicions concerning the actions of evil forces. A dark and absurd carousel begins to turn, with more and more unwilling passengers, all of them quite naturally innocent. Not only the girls are accused, but almost everyone starts accusing everybody else. The carousel is spinning out of control, and can no longer be stopped. (…) The director (Mikoláš Tyc) had an excellent ensemble of actors to work with. The key role of the vacillating John Proctor was played convincingly by Petr Štěpán. He decides to admit to his short extra-marital affair and shed light on the whole situation much too late. He is an inconsistent hero, but a character who is understandable and psychologically believable, especially when an actor plays him so precisely. He yields to the pressure from the court and admits his guilt, though he refuses to name others. His journey to the gallows thus becomes unavoidable. His wife (Lenka Janíková) has a role which is relatively clear and unambiguous. She plays the withdrawn, outwardly “cold”, rational, puritanical woman precisely and with sensitivity. (…) All of those in the male roles deserve praise without exception. Michal Isteník brilliantly depicted the transformation of the honourable John Haley, whose zealous belief set the whole carousel in motion, but then realises, although it is too late, his mistake and guilt. He can no longer change things, but at least he refuses to participate any more. Viktor Skála portrays the honourable preacher Parris, who at the beginning is unwilling to admit that the girls’ illness could be anything more than a medical problem. He has a good reason for this, as it was he that caught the girls dancing in the forest. However, after his initial prudence he changes into a fanatic rushing to add logs to the future “bonfire”. The naturally earthy Giles Corey (Zdeněk Junák) is one of those who out of sincerity and openness inadvertently say something that will cost the life of the person dearest to them. His later attempt to change things is doomed to fail. Jan Mazák plays Deputy Governor Danforth with spine-chilling convincingness. (…) From the female characters it is impossible not to mention Mary Warren as portrayed by Eliška Skálová. It is a character that undergoes a series of peripeteias. She stands up against those in power and overwhelming social pressure in order to defend the truth, expressing inner strength and overcoming her own fear. However, she eventually succumbs and returns to the flock afflicted by the all-encompassing court-confirmed delusion in order to achieve her own self-preservation. (…)

FANATISM AND OBSCURANTISM RULE IN BRNO

(…) In The Crucible, events – attacks, accusations, imprisonment and executions – start happening almost inconspicuously as a call for the restoration of the fear of God and the eradication of the devil´s temptations. However, everything gets out of hand and the avalanche cannot be stopped even by those who started it and would like to bring public affairs back to their original state. And this is the reason why John Proctor´s confession about his associations with dark powers is even accepted by the priest, Parris, with relief and thanks to God. The Crucible doesn´t need to be performed with historic set pieces and costumes these days. Andrej Ďurík and Aneta Grňáková fulfil the director´s intent to make the topic timeless. Petr Štěpán, Lenka Janíková, Jan Mazák, Michal Isteník, and particularly Barbora Goldmannová as the source of all the evil, Abigail, all turn in standout performances. Last but not least, Jiří Hájek´s music captures the dark themes of unshakeable dogmas, the wielding of lies as an instrument of power and the weaving of intrigues against one’s fellow citizens with the aim of self-enrichment. (…)

(…) Brno’s The Crucible has been produced with an emphasis on the actor’s art. There are no special finesses to emphasize the inventiveness (and sometimes also autotelism) of the director’s work. Everything is done to conscientiously fulfil the purposes of Miller´s text and produce mature, dynamic acting. This works on the stage so successfully that really nothing needs to be added. The main role in the play is that of John Proctor, a fair man whose only weakness is infidelity, which brings him untold hardship. He’s played by Petr Štěpán, who portrays him as a manly, robust figure coping with a level of inescapable suffering almost worthy of the ancient tragedies. Lenka Janíková plays a woman trapped in the throes of similar internal agonies, Proctor´s wife. The complex character of Abigail Williams, John Proctor’s rejected lover, and a fanatic and a liar, is portrayed by Barbora Goldmannová. Eliška Skálová is particularly impressive as the innocent, internally unbalanced Mary Warren, while Zdeněk Junák portrays another farmer, Giles Corey, as a most distinctive character. Viktor Skála and Michal Isteník play the priests Parris and Halle, each of them in a different position, unveiling their weaknesses – a lack of courage to face reality. The all-powerful vice-governor Danforth was an almost spine-chilling role for Jan Mazák, who played him as a level-headed but fanatical judge. He credibly delivered the argument (devilishly dreamt up by Arthur Miller) that he couldn’t just let dozens of innocent prisoners go free when others have already been hung for the same misdemeanour of witchcraft. (…) 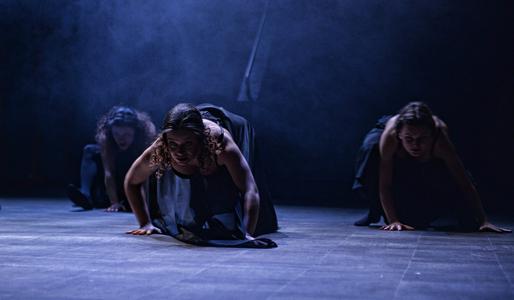 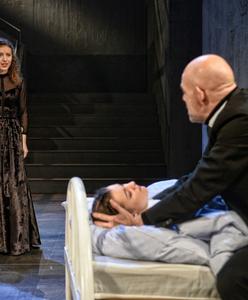 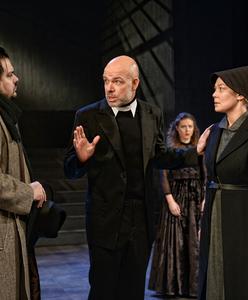 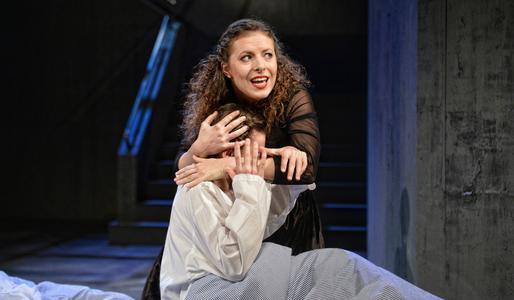 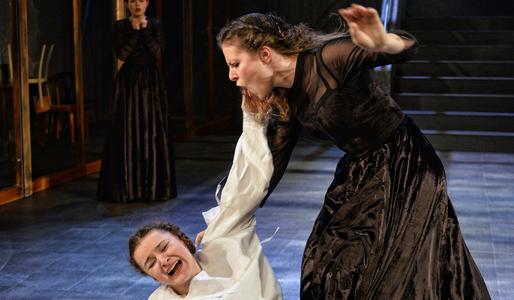 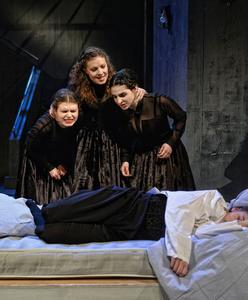 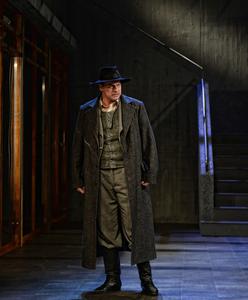 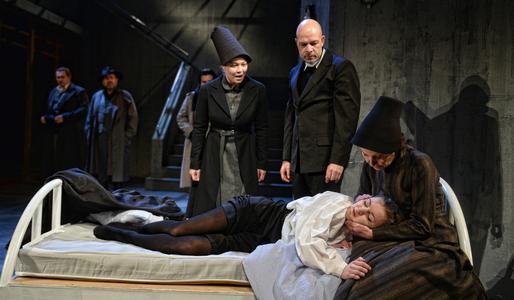 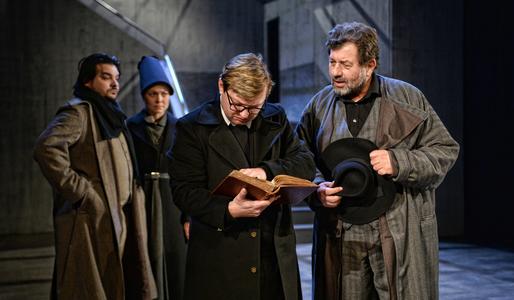 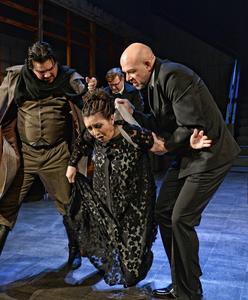 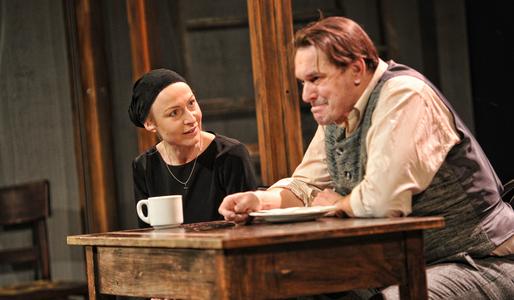