a classic comedy of intrigue

‘Once upon a time, the Creator wanted to create a play and he put together a piece called “Love”. It was a runaway hit - crowds at the box office, sold-out hall. Enchanted by His success, the Creator wrote part two – “Marriage”. And as it often happens with sequels – failure struck.’

If Central Europe has a classic comedy writer, it is undoubtedly Johann Nepomuk Nestroy. This is primarily due to the qualities of his comic works, which are filled with extraordinary theatrics and inventive plot twists, and feature the skilful interweaving of hilarious errors and misunderstandings along with unusually fine dialogues containing Nestroy´s renowned bons mots (“It is lucky that I can drown my sadness in wine, otherwise I might get addicted to booze!”)

The protagonists of Nestroy´s comedy are two travelling actors, Artur and Picl. The first of these gets involved in a series of romantic escapades which force him to resort to various disguises and intrigues while the other makes ironic comments on everything. The basic paradox of this comedy is the fact that nothing actually stands in the way of the central pair of lovers. Artur is in love with a lady named Ema Bušová but is totally unaware that Ema is the foster daughter of his uncle, the factory owner Mr Truchlant. And Mr Truchlant decides that he wants Ema to get married – to Artur. However, Artur assumes wrongly that Truchlant wants to marry Ema himself, and starts planning her abduction…

Nestroy was a master of the principles of comedy of intrigue and manages to link them here with the specific poetry of the lives of travelling actors while at the same time maintaining a detached perspective that’s both kind and amused. Those who enjoy clever entertainment in the nostalgic Austro-Hungarian style certainly have something to look forward to. The production will be directed by Mikoláš Tyc.

Brno City Theatre has bet on the witty marriage comedy Just for kicks by Johann Nepomuk Nestroy. The production of Mikoláš Tyc is a playful drama comedy with excellent coordination of ten actors. (…) This is a brisk show, stylizing the actors to a slight caricature and hyperbole in both verbal and non-verbal expression. The naive tones, conspicuously played up, as well as the exaggerated pastoralism on the Brno stage under the portal with hanging geraniums, are the ideal director’s tools. (…) The emphasis on naivety and hyperbolization of the side-splitting idyll gives actors space for intentional overacting but mostly for cooperation. Tyc’s Just for kicks is an example of great collective teamwork. Both travelling protagonists – here Jan Brožek (Artur) and Aleš Slanina (Picl) – are moving safely between the demarcated contrast poles of a cunning lover and his cynical companion. Petr Štěpán as Artur’s rich uncle Truchlant shows greatly overstated and excellently exaggerated humour. But really all of them are great. Milan Němec as the innkeeper Kyselák, Michal Isteník as the capitalist Myšička, Marek Hurák as his weakling son Ignác or Marco Salvadori as the waiter Jirka, whose authorial monologue with the names of Italian dishes gets a deserved applause in the open theatre. And the ladies are keeping up as well: Barbora Goldmannová as Truchlant’s foster daughter is a silly goose from an old film, Eliška Skálová a miminy-piminy innkeeper’s daughter and Lucie Bergerová plays no less than three roles with a comic gusto. The final message of the comedy is a statement that all the fuss was for nothing. You won’t feel like that after the show.

(…) The Drama Theatre of the Brno City Theatre staged Just for kicks, one of the comedies by Nestroy, in the dramaturgy of Jan Šotkovský and directed by Mikoláš Tyc. (…) The viewer can surely look forward to a real farce. Right away, the functional stage of Andrej Ďurík and the flawless period costumes of Alexandra Grusková suggest that a classic comedy will be played, very close to the Vienna rendition. The actors are also directed to a slightly expressive declamation so close to the farces of the mid-19th century, which makes the comic roles, their chattiness and the skilfully chosen dramatic pauses even funnier to the sight and ear of the contemporary viewer. (…) Jan Brožek (Artur) and Aleš Slanina (Picl) played with their roles very nicely. Truchlant, the factory owner, was imitated by the vocal engagement and conceited expression of Petr Štěpán. Ema, the foster daughter, (…) was played in a nice pace by Barbora Goldmannová and then there was the innkeeper in the Tyrol folk costume, played excellently by Milan Němec. (…) Audience laughter was plentiful. (…) Myšička (Michal Isteník) and his errant son (Marek Hurák) are another ideal couple for a true farce. The father, capable of anything, and the son, capable of nothing. (…) And the fun is clear as daylight. And we must not forget about Lucie Bergerová who played several different and contrasting roles with gusto. (…) The Austrian farce from the mid-19th century will definitely find its place in the Brno theatre and become a favourite in its repertoire. The only problem might be to decide which production to “put aside” since even the oldest title is still selling out the auditorium.

The last premiere in the Brno City Theatre belonged to the Central European classic of comedy, a prominent representative of the Vienna folk theatre. Johann Nepomuk Nestroy and his Just for kicks staged in Brno are good choices. (…) Just for kicks is a brisk comedy with a plot skillfully twisted together by a master in his field. The viewer is led to the denouement by the author and the stage directors, accompanied by the main characters of two travelling actors (Jan Brožek and Aleš Slanina) and a number of other important and nicely interpreted characters, bigger and smaller. They will go through a series of comic situations with many blunders and misunderstandings. Until everything unravels and clears up into the realization that all the effort was really not worth the while. The play draws on situational comic, has great verbal humour and witty rejoinders. The director (Mikoláš Tyc) pointed the actors to a slight caricature and hyperbole, both verbal and non-verbal. Thus all the actors are “harmonized in their style”, although their characters complement each other perfectly. They are a well-coordinated team and each one of them, regardless of the significance of their role, performs at the same quality level. The comic effect of the individual scenes is emphasized by the use of two scenic spaces on the stage. The parallel plots relate to each other in a funny way, permeating each other. The stage (Andrej Ďurik) is designed in the spirit of the time – the “good old days” – which is also reflected by the costumes (Alexandra Grusková). (…) 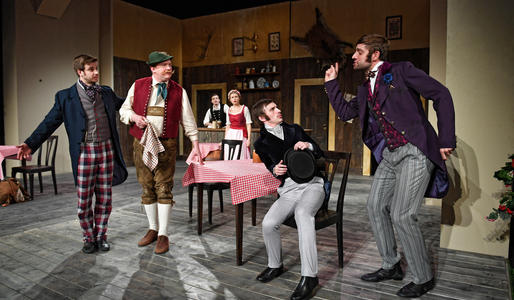 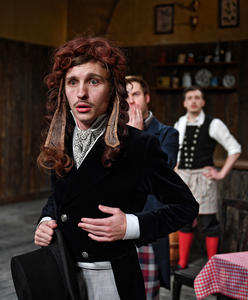 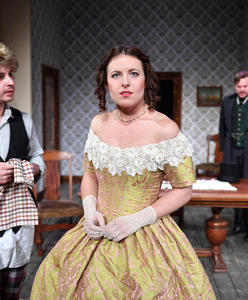 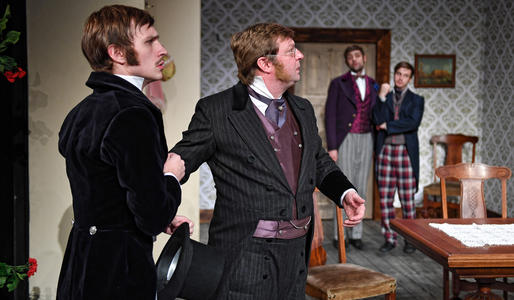 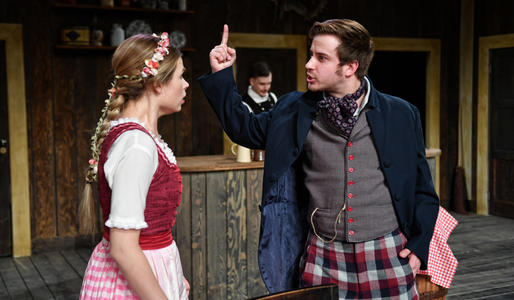 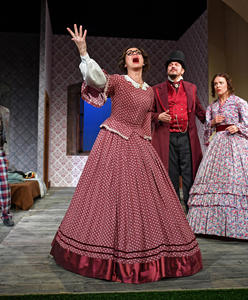 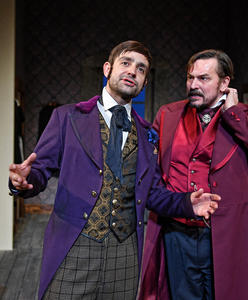 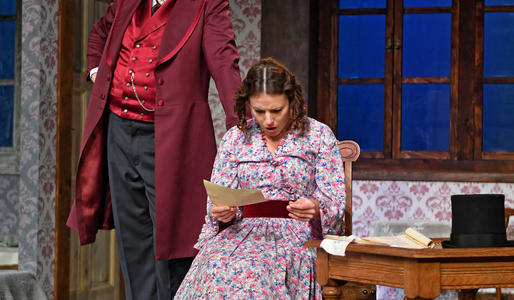 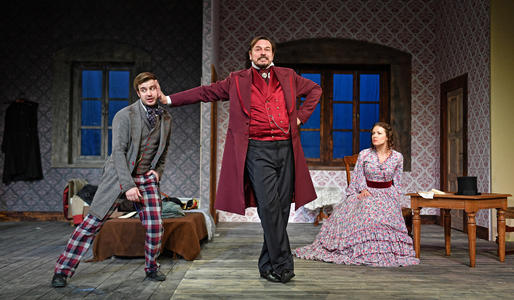 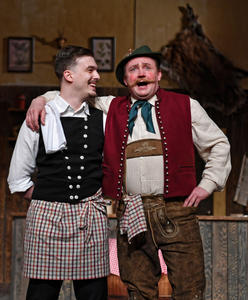 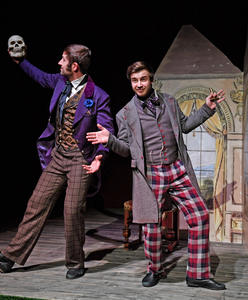 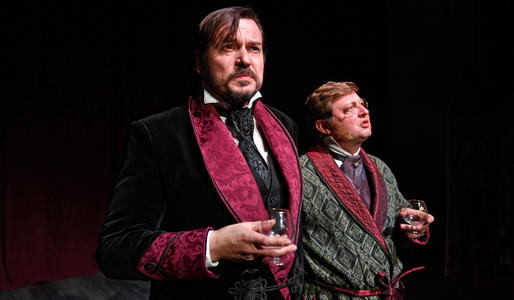