“Paradise Lost” is rightly considered to be one of the most important literary works ever written. It is an extensive, twelve-book epic poem by the eminent English poet John Milton, who created a work that searches for the roots of human evil and sin. In the 21st century world, this literary gem from the seventeenth century still seems an incredibly topical stream of questions we wish and need to know the answers to. It isn´t possible to name all of them, but the main questions seems to concern the fact that people are prone to breaking an agreement or promise even when they suspect their deed may have fatal consequences. Is this the result of constant human dissatisfaction or merely a human whim?  Once again, it is an enquiry into the nature of the first human sin, which is also referred to as hereditary, a kind of unfortunate legacy passed down through the generations from our ancestors and historic events. Is it at all possible for the people of this modern age to calm themselves and gain a humble insight into their own failures? Only then can the path to real happiness be found.

The story refers to the Old Testament Book of Genesis in which man was tempted by the promise of pleasure and knowledge, and succumbed, breaking a contract with God, and was subsequently expelled from the Garden of Eden. Doesn´t a contemporary person also have the constant urge to succumb to false voices, false benefits, momentary well-being, at the expense of a natural agreement with their own conscience, their own roots, or simply with their clear and pure belief about what is good and what is wrong? But on the other hand, how can one recognize evil when it hidden under a golden veil and offers a seductive smile or an instant “tickling” of the ego?

John Milton speaks in a tongue laden with metaphors, and his beautiful visions teem with images of hell, paradise, fallen angels, the war for the human soul… Our ambition is to transform his language into that of the present day and find clear links between the legacy bequeathed to us by the geniuses of Renaissance poetry and today´s reality. The playwright and director of this stunning work is Dodo Gombár.

MESSAGE ABOUT COURAGE AND TASTE!

(…) The mace of intensive courage, not only in dramaturgy, is currently elatedly held by the Brno City Theatre, having reached an important goal by the historically first domestic production of a scenic adaptation of Milton’s Paradise Lost. (…) The most famous work of the renowned Baroque versifier caught the eye of Dodo Gombár, one of the leading mystics of the present Central European theatre, director and screenplay author, who brings it closer to our time in the form of a mostly current, foresightfully creative and formally and ideologically attractive tragicomic disputation of the eternal conflict between the ideas of good and evil. The production (…) is an exuberant celebration of freedom, stage intelligence and seductiveness. (…) The acting ensemble (…) revels mischievously in the gush of stage imagination and artistic impulses. The collective energy of the work is obvious, readily breaking barriers between the stage and the auditorium. The relationships between angels, demons, gods, allegorical characters and humans are transparent, pulsating with complex emotions and humour, often sarcastic. Paradise Lost is a gift especially for the trio of male actors, with the most attention attracted by Petr Štěpán.  His Satan is purely a contemporary character – a charismatic solo player as well as an underground revolter and a respectable, albeit repeatedly failing, rival to God. The seemingly smug voice play is in line with the nonverbal aspect of the character, rivetingly implying not only a false player but also a being that has been emotionally broken many times. God, as interpreted by Zdeněk Junák, is a pure definition of crafty wisdom of an aging Creator, whose quiet is greatly complicated by the knowledge of the things to come and the unrelenting desire to play. (…) However, the crown of the king of the evening has been taken by Milan Němec as Uriel. In Gombár’s parallel of theatre and the world, the archangel of light and wisdom is the director, and therefore the real heart of the Paradise, as well as the author’s alter ego. The presumed drabness of Uriel’s appearance is compensated by an excellent level of stage speech, plasticity in connecting human attributes to the angelic ones, and particularly the authenticity of compassion for the human destiny. The birth of humanism in real time. (…) Paradise Lost in Brno is a feat that must not be overlooked. (…) It gives an urgent and current voice to courage, beauty, sense and emotion. Theatre created of love!

Brno City Theatre mounted a dramatization of John Milton’s epic poem Paradise Lost with the subtitle Report of a Man. (…) Gombár found the ideal and functional key. In his production, before the audience, he not only unfolded the world of Milton’s ancient poem, but sometimes he placed it in the environment of a present-day theatre rehearsal, other times he speaks in today’s language and extends certain themes of the original. (…) He presses the contemporary people with questions about what they consider a paradise today, whether they even think about it, if they live it, or whether their spirit and imagination lost it a long time ago. He achieves this by a clever and imaginative pastiche which primarily doesn’t look up to the beauty of the verses and their noble language. The director aims to draw the gaze of the audience to an intimate confession of their own failures, the concept of sin, a desire for affluence and differentiating between good and evil. (…) It depicts the expulsion of the first people from paradise. (…) Here, Eve cooks marmalade from the forbidden fruit, which is not to be tasted. The seduction by Satan humorously portrays us as slaves to modern technology, from the Internet and smartphones to the bitten apple of a famous American computer company. Sometimes, God is an overlooked elderly man bound to a wheelchair (and also a theatre director), Uriel a slightly tired angel (and partly the director of the play) and the archangel team of Gabriel and Michael is played by two sexy actresses in mini dresses (other times bickering colleagues). (…) The admitted parallel of the paradise events with theatre operation really works, lightens the plot and allows the direction to take the desired side-steps to the present. (…) The collective performance, which is cohesive and compact, represents a stand-alone quality of the production. (…) The overthrown devil is played by Petr Štěpán, not only superficially Mefistofelian but with a degree of derisiveness, rising at the end of the evening when he takes a selfie with both the expelled sinners and the heaven crew. Štěpán is a logical and supporting focus of the production, around which other good performances rotate. Let us mention Jakub Przebinda as Beelzebub, Milan Němec as the unhappy and unrespected Uriel. Also there are the very well-structured performances of Jan Brožek and Barbora Goldmannová as Adam and Eve. (…) 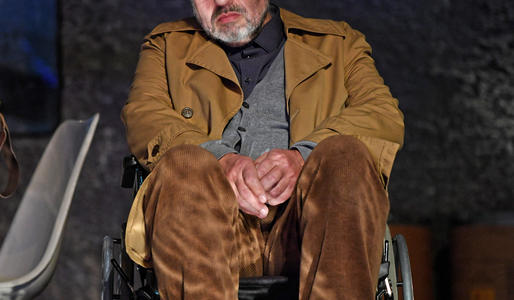 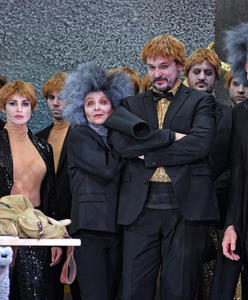 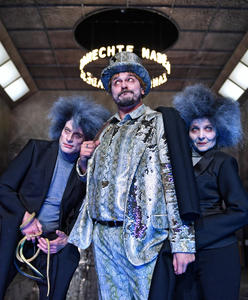 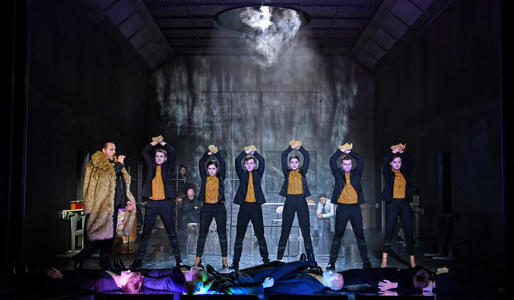 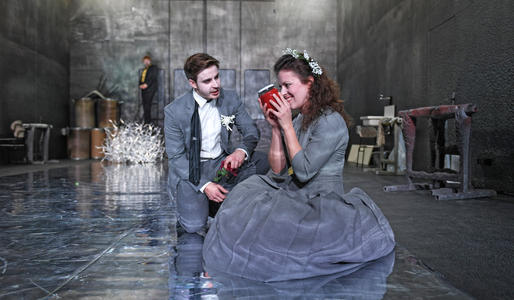 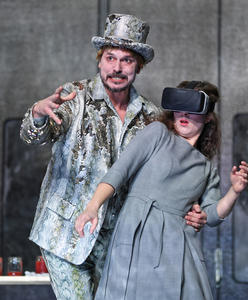 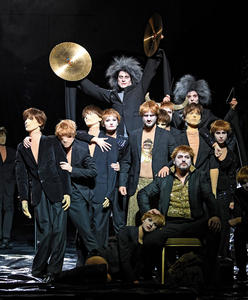 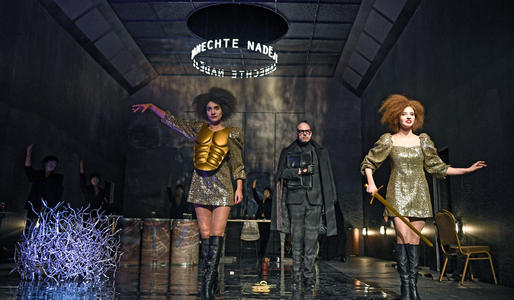 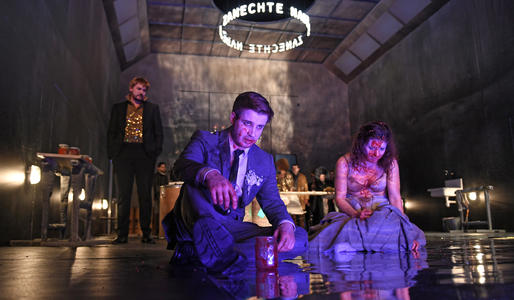 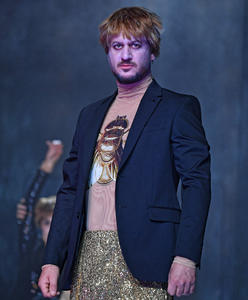 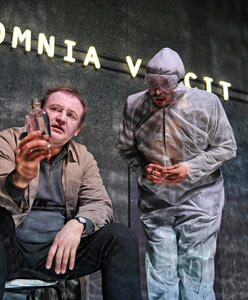 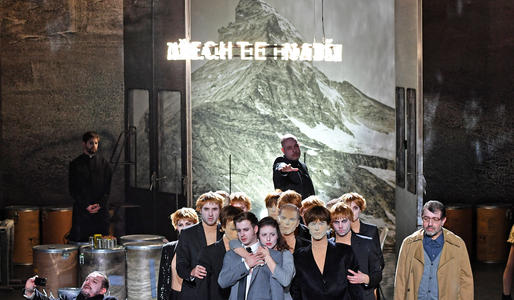