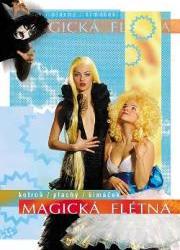 The renowned Czech composer and conductor Petr Kofroň, the director Zdenek Plachý and the screenwriter Jiří Šimáček (authors of the ambitious production “Phantom or a Bloody Opera” presented in the Prague National Theatre) prepared the performance “Mozart’s Magic Flute” for the Brno City Theatre. This “rhapsodic singspiel” comes out of Mozart’s famous opera The Magic Flute just partially. (However, audiences will not be deprived of the most beautiful melodies of the Magic Flute – the famous aria of the Queen of the Night or the well-known duet of Papageno and Papagena.) The authors decided to introduce the spirit of the contemporary world in Mozart’s and Schickaneder’s original. Mozart’s original opera is sometimes regarded as so-called Masonic opera in which Mason Mozart disclosed more Masonic practices than it was allowed. The authors of the new adaptation developed a completely new scenario in which the empire of the Queen of the Night is governed by fascinating human principles such as human compassion, gratefulness, patience. On the other hand, Sarastro’s empire is admired for its education to self-sacrifice, solidarity, respect to laws and order. Thus, there is not the conflict of the empire of good and the empire of evil in the new presentation, but two empires of good conceived in different ways struggle for power. On this background, the famous love story of Tamino and Pamina sounds strong. Although they respect the foundations of the mentioned empires, they are divided tragically by them.

Actors speak, dance and sing in this new “rhapsodic singspiel”, viewers can admire brilliant and witty dialogues written directly for the actors of the Brno City Theatre. But that is not all!

For the first time in the history of the Czech theatre two genres will be united – the grand dramatic music presentation with an illusionistic show of “Karel Bush & Company”, one of leading European illusionists. Illusions great in their importance and size will be shown during the performance. For example, illusionist’s passage through a rotating aircraft propeller belongs to the top numbers of the world-class illusionism. This unique illusion cannot be seen on common European stages – but the stage of the Brno City Theatre Music Scene has been designed even for such technically difficult performances. All illusions make fixed parts of the scenario of this new extraordinary multimedia project.

Lovers of music theatre experienced a real harvest in Brno last weekend. The premieres of two originally processed but classic and apparently untouchable music-dramatic matters took place closely one after another. By Provocation to the Merits

In spite of directorial innovation, Havelka’s production is a certainty for spectators. But the authors of “ardent singspiel” called The Magic Flute produced by the Brno City Theatre found themselves on much thinner ice. Their greatest disadvantage is that their work does not address any markedly profiled audience. Opera lovers, if they take courage to enter the music theatre, will not accept the simplified form of vocal numbers; fans of popular productions of this ensemble hardly reconcile to the elaborate speculative shifting of borders of acceptable.

The performance brings a completely new libretto written by Jiří Šimáček and stage manager Zdeněk Plachý, music was composed by Petr Kofroň. The artistic group “Střežený Parnass” (Watched Parnass) to which the mentioned personalities belong, has provoked a lot of controversies during its ten-year activity. The group tries to delete the frontiers between art and reality, which enriches their productions. An important semantic feature of their work is the use of kitsch to replace some old-fashioned and insufficiently stylized emotive means.

You will not encounter the majority of Parnassian devices for the first time, but it may be the last living example of honestly seeking and fighting avant-garde which will only live on textbook pages. Naturally, the typical Parnassian obsession with everything unknown and untried provokes, but the connection of fads with ultraconservative approaches cannot be condemned as desultory.

First of all, The Magic Flute is a musical. Although, drama dominates over music in time, the whole drama is held static, or ritual in some places. Scenic effects come to the front. Besides the masterly elaborated choreography, the impressiveness of the whole is intensified with the numbers of ensemble step dance and mainly of magician Bušina, thanks to whom the presented hegemony of force and power is expanded to supernature. Sarastro’s empire is depicted to the smallest details, it has its perfectly functioning cult, symbols, laws and system of education. The political form on the border between utopia and fascism is a suitable parallel to Mozart’s Masonic messianism.

Besides the magician, the greatest attention is attracted by costumes designed by Linda Dostálková and Kofroň’s music, oscillating rebelliously among schmaltzy music, minimalism, techno and bigbeat. Compromise is an unknown term for the production team. No wonder that the reaction of audience was rather perplexing than tepid. Parnass has created a huge theatrum mundi rolling to a spectator with unprecedented intensity. Parnass is watching Mozart’s heritage in an extraordinarily original way.

The Brno Magic Flute Was Coped by Everybody. Authors and Singers.

The trio of authors - composer Petr Kofroň, screenwriter Jiří Šimáček and stage manager Zdeněk Plachý introduced itself with the music-dramatic and illusionistic performance The Phantom or Bloody Opera put on the stage of the National Theatre last year. Although it was not understood by the majority of our music reviewers, the trio appeared with a successful play The Magic Flute in the Brno City Theatre a year later.

But the authors are not aiming at a direct hold to Mozart’s last opera in the year of the 250th anniversary of his birth: they search for the sense of symbols and the poetic roots of Schikaneder’s libretto much more. In fact, it is not a fairy tale but Masonic interpretation of the world shared by Schikaneder and Mozart.

The house with windows shining into the dark resembles a little Orion chocolate commercials – before you notice that spruces are hanging balefully with their tops downwards at the background. The Queen of the Night educates her daughter Pamina to almost aseptic good. She devotes herself to needlework under an unobtrusive supervision of three ladies – personified Patience, Gratitude and Sympathy: she frets about the fact that her choice of a certain shade of colour will grieve those who would chose another shade. Performances of illusionist Karel Bušina enrich the production. This is proved for example by disappearance of the princess to the world behind the mirror or the extraordinarily difficult balancing creation with the head of the Queen of the Night on a bowl.

Kofroň’s music, if you pass over several associations of notoriously known melodies, does not paraphrase Mozart’s model, but is not related to it in fact. Its inner strength is expressed mainly in almost hymnic passages describing the magnificence of Sarastro’s court. No less convincing and strong are more chamber scenes, for example the song of the Queen of the Night in the introduction. Plachý’s Magic Flute is not pathetic, the stage manager works with comic contrasts very sensitively. Tamino (Oldřich Smysl) falls in love with beautiful Pamina’s picture represented by coloured or technicoloured photograph. Three “geniuses of mankind”, children cocooned in coloured asexual dresses cite the general Declaration of Human Rights.

The performance is dominated by several successful dramatic performances. Jan Mazák in the role of birder Papageno can interconnect serious positions with non-serious ones almost in a clownish way. When you hear the suggestive voice and singing of Michal Zavadil acting magician’s speaker, you are sorry that he does not have a medical practice instead of playing theatre. The Queen of the Night acted by Ivana Vaňková is also impressive.

A partial weak point of the performance is the too big contrast between the varicoloured first part and the more philosophical, sometimes schematic second part. In the Magic Flute the good does not fight against the evil, there is a conflict of two types of good. The authors do not consent to extreme relativism, they just develop the contrast between natural good and “positive” good: pupils at Sarastro’s “school” tell an exact definition of anything upon request. Of course, the relation between freedom and integration is a serious problem, but the art can just make it present. The solution is up to us.

What Mozart Could Not Anticipate

The Magic Flute is a response of the year 2006 to Mozart’s Magic Flute of 1791. It is its shift to the present music and expressive form, but not in the sense of any realistic update. Střežený Parnass tends to decorate things again, dust them, illuminate them unexpectedly with a new, maybe sharp neon light.

Parnass does not make any difference between the high and the low, they know that the audience must be captivated, attracted and shocked. I think they are often successful in that, but the audience response is not always positive. At least, the response to pretentious numbers of master magician Karel Bušina (last year he cooperated on the Phantom of the Opera in the National Theatre) is positive. The spectator witnesses portioning of actresses, their levitation, mysterious disappearances from boxes full of sharp spikes. Master Bušina also presents a “front balance” with a sword and a bowl during which his body turns in the height around its axis and nothing falls down! It is almost sure that the majority of audience has never seen anything similar in the theatre.

That is why, the fanciful, fairy-tale expression of Mozart’s librettist Emanuel Schickaneder remained preserved: it continues to be a rococo story about kidnapping of beautiful princess Pamina by magician Sarastro, rescued by beautiful young man Tamino equipped with a magic flute by Pamina’s mother, Queen of the Night, and accompanied by seemingly blockheaded birder Papageno, whose plebeian maxims cut the wings of the nobleness. It is still the philosophical play including the enlightening Masonic symbolism of Schickaneder and Mozart, both freemasons, in details and the whole story (in favour of Joseph II in the time of rising “reaction”). The symbolism lies in the fight of light against the dark which is defeated.

The Magic Flute 2006 does not negate that the light, humanistic idea of the strength of progress, which rays of reason will conquer the dark and backwardness, is noble and deserves respect, if only due to Mozart. However, two hundred years after him the man was taught scepticism and reserve. The male principle of reason and light, which celebrates the famous victory in Mozart’s finale, looks like a totalitarian idea treading down every different thing two hundred years later. Sarastro’s Empire of the Sun becomes a mechanic machine for uniformity in the metaphor of the Brno performance. All citizens in same uniforms, with the same expression, standing and singing the festival hymn, step dancing: “One vision, one goal, strong will...” In fact, it is a futorological concept of the famous rococo play loved by Goethe, which is just a carrier of eternal Mozart’s music for the contemporary civilized audience. Surely, the good Viennese librettist Schikaneder (by the way, he worked in Brno some time) would not be angry. 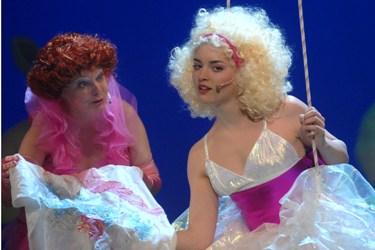 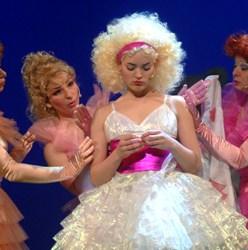 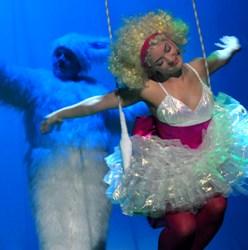 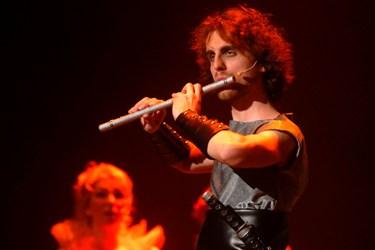 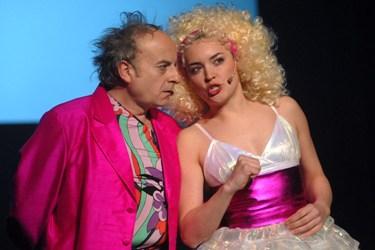 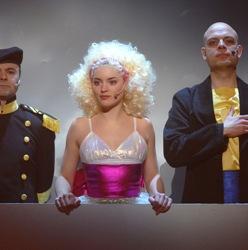 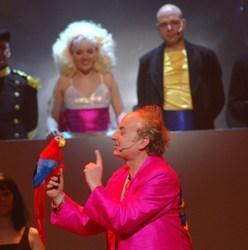 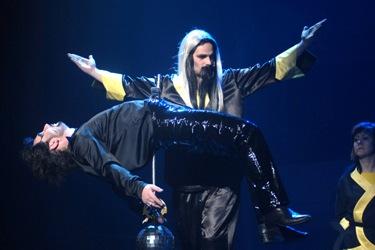 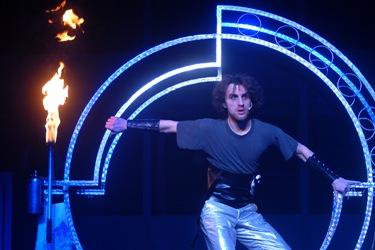 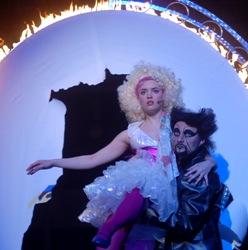 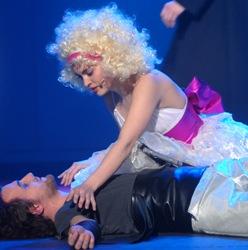 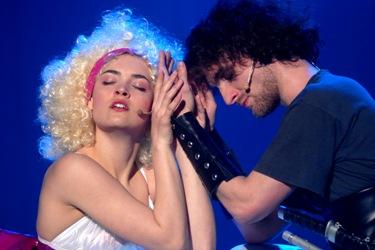