The Labyrinth of World and the Paradise of Heart 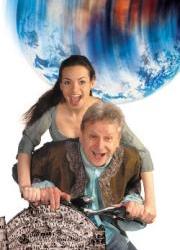 The Brno City Theatre puts on systematically entirely new dramas prepared just for you. The excellent Komenský’s book has attracted readers of several generations with its philosophy, rich ideas and exceptional poetic imagination. The author understands the principal mechanisms of the world as a labyrinth where piece and consolation can only be found after finding oneself, that is after finding piece and consolation in one’s own soul. The dramatic depiction of the author’s journey to the roots of principles of our world brings, besides the foregoing, a kind humour, exquisite opportunities for actors and extraordinary stage pictures. It is beautiful and sad as well to observe that the human character has not changed in the course of hundreds of years and that the work almost 400 years old is still topical. Several other Komenský’s books were also used in the production.

The Brno City Theatre (MdB) within the framework of the systematic performance of theatrical works with a connection with Czech cultural history behaves with great sensitivity towards Comenius’ significance. This is also true of the recent premiere of the theatrical interpretation of Comenius’ work ‘The Labyrinth of the World and the Paradise of the Heart’. This exceptional book has impressed many generations of readers with its wisdom, its richness of thought and also of course its exceptionally poetic descriptions. This was fully realised by Aleš Bergman and Jan Šotkovský, when they adapted the historical text to the modern day with sober piety and an awareness of its relationship to reality. The resulting work is not only strictly loyal to Comenius’ writings within which he names the basic mechanisms of the world, but it also shows the way to a modern interpretation of his ideals.

The founder of modern pedagogy, enlightened thinker and at the same time morally righteous priest saw the world as some kind of maze, in which it is possible to find peace and solace by discovering oneself, by finding peace and solace inside one’s own spirit. And it is just that which is sensitively respected by Brno’s theatrical production. In the author’s journeys to find the roots of the principles of perception of the world, elements of good-hearted humour also arise, which in the resulting stage version naturally offers excellent acting opportunities within extremely expressive stage scenes. “It’s beautiful and at the same time also sad to see how the human character has not changed over the centuries, and how this almost four century-old work is still relevant today,” said MdB dramaturge Ladislav Stýblo about the current stage transcription of Comenius’ work. It is impossible to disagree!

In harmony with Comenius

While Brno’s production arose from a symbiosis with several other works by Comenius, the basic story-line has been left perfectly untouched. The spectator perceives himself as always being directly addressed by Comenius’ most famous Czech-language work. This isn’t a simple ‘dusting off’ of historical material, but the creators did not opt for a naively simplified – or even insensitive – parody, as we have unfortunately witnessed all too often. Bergman’s version in Brno, however, respects the attributes of the sensitively-kept, almost archetypically-sounding historically-influenced original. At the same time it also must be taken into account that this work from the year 1623 must be perceived with regard to contemporary dramatic conventions and the different audience existing today.

The story therefore develops in harmony with Comenius’ original and visual elements are sensitively enriched only in order to address the audience, and never drown out the basic essence of the material. A similar course is taken by Sylva Marková’s scenery and costumes. A system of staircases leading to the horizon is reminiscent of the development of the story, while the suits creatively connect Comenius’ late Middle-Ages with our epoch. This is underlined by the background music, the authors of which are Peter Binder a Pavla Milcová; the engaging use of period psalm melodies really builds atmosphere.

During the premiere (24th February) the entire cast performed their roles very well, without any major qualitative problems. Of course, the largest share of the resulting success belongs to the actor Jan Mazák. His Ubiquitous doesn’t skimp on the expected pearls of wisdom, but neither is he miserly with warmth of expression. Mazák’s kindly perspective on the situation manages to bring the advisory (and possibly somewhat distant from the present) moral ethos closer to us in a spontaneous way, without moralising from a distance. It is exactly this smoothly differentiated and gently functionally lightened perspective that allows this work to be accessible even to the younger generation. In fact it is at them (as some kind of “school performance”) that this new Brno production should first and foremost be aimed. After all – the approaching end of the school year, and with it the usual visits of schools to the theatre – this production is a perfect choice!

Radka Coufalová – Vidlák fares no less well: we know her as a great actress in musicals, but also from the sphere of drama – here as Delusion she shines. Fluid and with immediacy, without that affected ‘musical’ style (so typical particularly of Prague productions!), softly bubbly, yet not going beyond the boundaries of expected gentility. The ‘delusion’ is not ethereal, but substantive, an appropriate foil to Ubiquitous’ wisdom. The updated comic elements only give colour to the playfulness, but are not simplified or in any way primitive.

Take off the blurry spectacles of delusion, and all will be clear!

The main pair of actors is seconded by many other characters – describing all of them would take for ever. It’s not possible to overlook the suggestive emotional performance of Jan Apolenář (in the 7th and 8th scene). At this point things are slowly coming to an end, though they don’t end up – as one would expect – in sadness. Instead, there is a return to playfulness, and the finale itself – probably so that Comenius’ message is not perceived as being mere unpleasant if not repellent boring schoolroom junk– ends in redemption. Peace on Earth and good will to all men….

The ‘Labyrinth’ reminds us of values

The famous Cimrman logical construction is said to be a ‘step to one side’. Brno City Theatre has made a similar dramaturgical side-step by deciding to stage Comenius’ ‘The Labyrinth of the World and the Paradise of the Heart’.

In this production, director Aleš Bergman, mainly an educator at Janáček’s Academy of Musical Arts, has given space on stage mainly to the young. It thus often makes one think of the graduates’ production at Studio Marta, though with slightly more professional-quality scenery. This isn’t a criticism, rather a complement on his choice of actors and the freshness of the adaptation of this almost four hundred-year-old text.

However, that text isn’t as ‘old’ as it sounds. Comenius’ Labyrinth is a great allegorical work that was ahead of its time and is relevant even today. In fact, in this time of shortening distances and the global village it is perhaps even more relevant than it was. Bergman decided to use the device of the author reading. Comenius’ Pilgrim thus he is played in each of 9 scenes by a different actor – reader. The allegorical guides Ubiquitous and Delusion (Jan Mazák and Radka Coufalová-Vidlák) are given the job of being a pair of presenters, introducing the authorial reading. The sterile background of the theatre auditorium is slowly brought to life as it is filled with characters from the guilds of craftsmen, merchants, soldiers and others.

It isn’t the joyful spectacle that visitors to the City Theatre are used to. It is an approximation of a classical text via the popular route of a ‘mixed-bag’ style performance, in which sometimes you are forced to smile (Street of Matrimony), while at other times unexpected events send a chill down your spine (iuris predentiam, among the philosophers, Dame Fortune’s castle).

And so the mission of this production becomes apparent – to show humanistic values at a time when people need them.

The theatrical adaptation of Comenius’ work “The Labyrinth of the World and the Paradise of the Heart” was given its world premiere on the Drama Stage of Brno City Theatre. Director Aleš Bergman (at the same time the co-author of this adaptation) and co-author Jan Šotkovský put their money on the alternation of static reading parts with dynamic portrayals and scenes.

The centralising force, connecting all scenes and readings, is the pair Delusion and Ubiquitous. Delusion is brought alive by young, subtle Radka Coufalová-Vidlák, and in the role of Ubiquitous is Jan Mazák, who has plenty of experience of great productions. Bergman’s direction has dynamism and impact, the production flows from one scene to another, each with its own character and novelty. An inseparable part of the performance is the music by Petr Binder and Pavla Milcová, which divides up the play, colours it, gets the actors dancing and generally enriches the atmosphere with an unusual quality not often seen in standard theatre performances.

Another component is the slow ‘uncovering’ of scenery with a mix of period illustrations and also costumes which could be said to be ‘neutral’ regarding period (both by Sylva Marková). Creative connections between the scenes and readings are the speaker’s desk and the multi-level scaffold at the rear of the stage. It is just this ‘scaffold’ on the stage that with the gradual unveiling of different parts becomes the basic background for individual appearances.

As far as the content of Bergman’s adaptation is concerned, he tries to hold together individual scenes purely using the atmosphere, spirit and method of expression of Comenius’ work. So without added “gimmicks” and other similar elements. 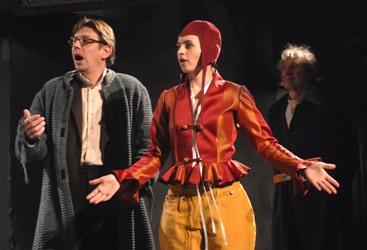 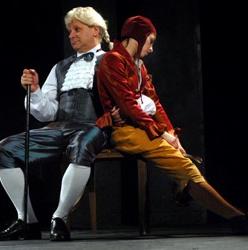 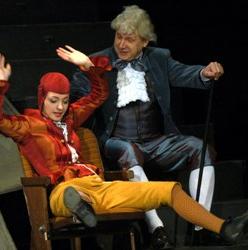 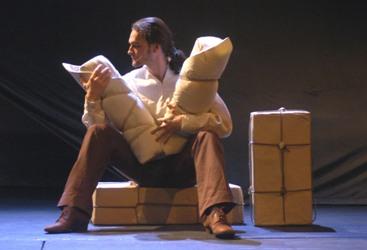 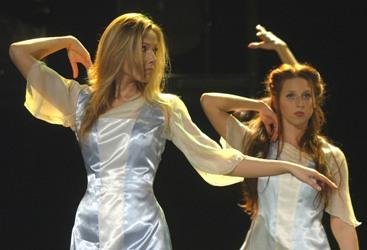 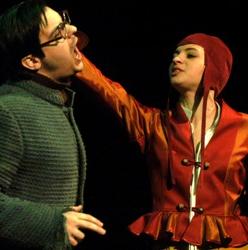 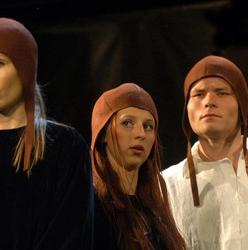 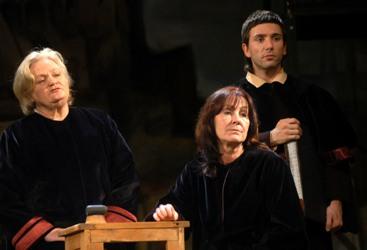 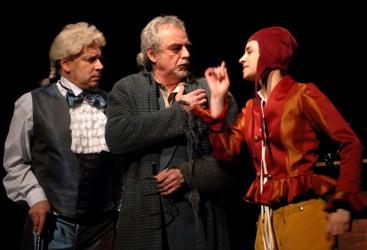 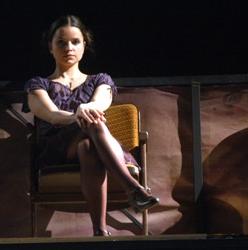 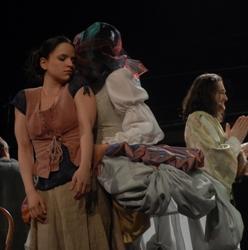 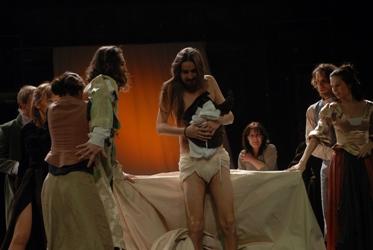