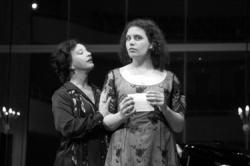 Maria Callas, also called “La Divina”, was the greatest opera singer, “primadonna absoluta” of the opera world. When she taught her opera class at the Juillard School of Music in New York in 1971 and 1972, the best period of her career was over. Written and tape records of her lessons were compiled by Terrence McNally into a biographic portrait of this exceptional artist.

The prima donna seemed severe and unmerciful to her students. Her critique was hard, her requirements for perfectionism merciless, she laid the same demands on her students as on herself: she required uncompromisingly their full devotion to the art. Her students – some modest, some ambitious, some talented, some just average – did not always put up with humiliating scenes without resistance, they listened fascinated to the artist speaking about her work and career. Like this, Maria Callas lived through the decisive moments of her life once again: her career in the Milan Scala, triumphs in the greatest opera domes of the world – but also her destroying love to Aristoteles Onassis and her private defeats.

Terrence McNally, confessor of Maria Callas, celebrated success all over the world with his play put on for the first time in the year 1995. He showed a picture of broken and egocentric diva who lost nothing of her fascinating strength. The drama wreathed with awards is tinged with the most beautiful opera arias.