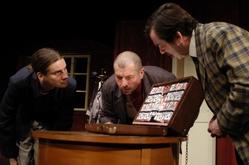 A story of days that are long gone

The Gamblers, one of the three finished plays by the Russian playwright N. V. Gogol, belongs together with The Inspector General and The Wedding to the best Russian comedies. The Gamblers is an excellently mastered study of the “souls” of those who go in for all kinds of frauds – in this case playing cards - not just for money but also for their own pleasure, loving above all - besides money - the risk caused by this manner of earning their living. This is not just a story of deceivers deceiving deceivers that makes you burst with laughter. Most of all, this is a play of passion, of the real passion (which is not a passion for a woman), of a passion which made the falsehood, lie and astuteness the most important values in the society and a man’s life, deservedly pushing aside the boring honour and honesty to the place where such values had long belonged. Finally, this is not a play showing that “the gambling” is not just a way of earning money but also a pleasure, a pleasure of balancing on the edge and making up refined tricks in order to deceive the others. The following idea of Gogol´s Gamblers is worth remembering: “It is not any art to live like a fool. However, to live a witty and clever life, tricking everybody and never being tricked – this is a real art, this is the objective and goal!”

The Gamblers by Nikolai Gogol are incredibly topical. For the first time, the play was staged in the Big Moscow Theatre on 5. 2. 1843. It was not that successful as The Inspector General (first staged in 1836) or The Marriage (1842), however it really deserves its place in the sun. A proof of this is its staging in the Brno City theatre (first night performances on 15. and 16. March). “The Gamblers” translated by Luboš Suchařípa is presented under dramaturgy of Jiří Záviš. Zdeněk Černín was the director (and he also adapted the text). (He also put this play on stage in Silesian Theatre in Opava). Jan Dušek as a guest is the designer of the setting and the costumes. The author of the music is David Rotter as a guest.

First of all it should be said that the play offers lots of opportunities for the actors and the director approaches it as “an actors´ play”, in which ideas are conveyed to the spectator through the actors´ interpretations. The actors of Brno made full use of such an opportunity, which the first night performance showed on Sunday. Every character was perfectly represented, each actor’s interpretation reflected the actor’s ideas of the character, and all this together led to a perfect result. It is a pleasure to watch Martin Havelka (Icharev), Erik Pardus (The Soother), Patrik Bořecký (Shvochniev), Zdeněk Junák (Krugel); neither Jiří Tomek (Glov Senior), Jan Apolenář as a guest interpreting his son (alternating actor Alan Novotný), Zdeněk Bureš (Zamuchryshkin), Pavel Kunert (Alexei) and Karel Bartoň (Gavrilka) do no fall behind the four incredibly clever card players and tricksters. The play is presented without external effects; it develops excellently until the surprising point. The never-ceasing tension surely builds up due the fact that there are no breaks during the performance.

In spite of being almost 170 years old, The Gamblers by Gogol reflects the present: corruption, ignorance, frauds, which are the three “columns” of the society. The text is timeless and still topical. As Icharev says: “It is not any art to live like a fool. However, to live a witty and clever life, tricking everybody and never being tricked – this is a real art, this is the objective and goal!” Funny? In the theatre, yes, however it is quite sad that such a theory is applied in everyday life. Zdeněk Černín adds: “Today, you do no offend people telling lies but telling the truth.” We will give you a piece of good advice: 580th repeat performance in the history of the Brno City Theatre is surely worth seeing. Do not lose your opportunity.

The Gamblers by Gogol entertain and does no offend

In order to substitute Waiting for Godot by Beckett, which could not be presented, the last weekend the Brno City Theatre presented the fifth play of the season, The Gamblers by Gogol. The play in which a little group meets of passionate gamblers for whom money is as important as playing tricks on their mates in order to deceive and defeat one other, offered first of all opportunities for the actors who could excellently express the characters of the experienced little tricksters. The play starts slowly by the arrival of Icharev at some tavern, in which the Soother, Shvochniev and Krugel are already playing. At first the group gets shyly acquainted with the new incomer, however very soon all of them put away all inhibitions, succumbing to uncontrollable gambling passion. Just as in every good joke, the plot gets quite complicated before the spectator realises who finally tricked whom.

The director Černín follows the text and the author’s objective without trying to dazzle the spectators. He really plays: he plays with the situations, words and actors.

The newcomer Icharev is interpreted by Martin Havelka, the characters of the Soother, Shvochniev and Krugel are excellently interpreted by Erik Pardus, Patrik Bořecký and Zdeněk Junák. They make quite a good lot: Pardus as Soother likes easy elegance, cavalier behaviour and modesty; Bořecký as Shvochniev is more explosive and impatient, and Junák as Krugel peacefully and joyfully waits for the outcome of the situation. Jiří Tomek interprets a convincing little role of the farmer Glov senior; Glov junior is interpreted by Alan Novotný alternated by the guest Jan Apolenář. The most entertaining moments are those in which all the gamblers are on the stage and willingly “help” to each other. However, when Havelka is left alone on the stage for a while, his pseudo-topical monologue to the audience is a little unconvincing.

The Gamblers offer one hour and a half of quite a good entertainment and the humour of the play cannot offend anybody. For the actors, the play means agreeable “refreshment” in the list of their roles.

Fraud is also an Art

The absence of Boleslav Polívka and the postponed Waiting for Godot was the reason which made the director Zdeněk Černín to add The Gamblers by Gogol in the drama programme of the Brno City Theatre.

Černín stresses the grotesque features of the excellent and sharply ironic Gogol´s drama with a tragic point. Icharev, a refined trickster is tricked by primitive direct countrymen who work as a team. You know: the world goes where the strength pushes it. The director built his concept on the “exposing of cards”. If Icharev were less consumed by his own geniality, he would have noticed the amateur scene presented by the well-coordinated team of the Soother, Schvochniev, Krugel and other men. His watchfulness is completely lost due to the vision of winning two hundred thousand for eighty thousand. The destruction of a trickster of a world calibre tricked by the scums is unavoidable.

Martin Havelka as Icharev knows how to make contact with the spectators and in Brno, he is a guarantee that spectators will always queue up for the tickets for Gamblers. The nervous Krugel interpreted by Zdeněk Junák and the shy, but the cleverest gambler Soother interpreted by Erik Pardus represent nice little figures whose characters are prepared with incredible details. Shvochniev (Patrik Bořecký) is a “trustworthy” contrast representing a young inexperience. The role of the always-losing Glov Junior, an excellent little figure, is interpreted by every time more mature Alan Novotný and Jan Apolenář, who has fortunately returned to Brno. The Gogol´s witty play also offers opportunities to old experienced actors: Jiří Tomek (Glov Senior), Pavel Kunert (Gavrilka) and the miraculously recovering Karel Bartoň (Alexei). The music is Russian-like, the actors “trick” when performing the Cossack dance not just due to the genre. The comedy develops smoothly and within one hour and a half the spectators go home. And these are words of praise to the director and his drama adviser Jiří Záviš. 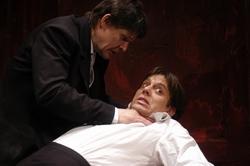 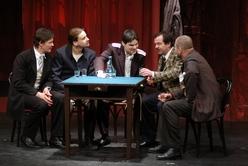 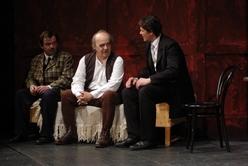 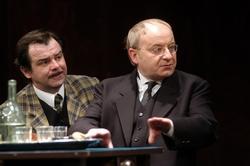 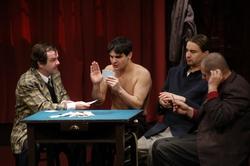 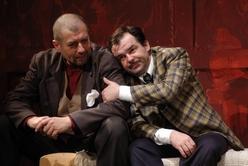 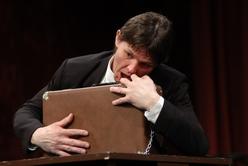 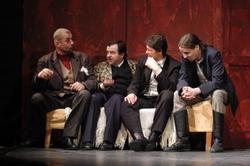 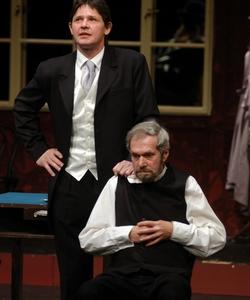 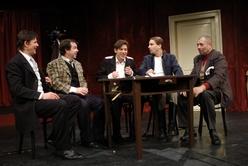 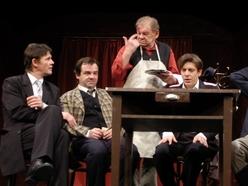