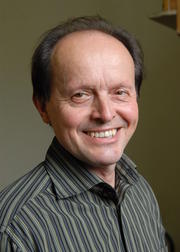 Director, teacher, actor. He studied at a military grammar school in Opava and then studied acting at the Janáček Academy of Music and Performing Arts, under the leadership of professors Rudolf Krátký, Jaroslav Dufek and Pavel Hradil. His first professional engagement was at the North Moravian Theatre in Šumperk where he acted e.g. in the role of Thyl Ulenspiegl in Gorin´s play of the same name, D´Artagnan in the musical Three Musketeers After Thirty Years or the leading male role in Gelman’s play We, the Undersigned. After two years of working in Šumperk, Zdeněk Černín returned to Brno, this time to join the ensemble of Mahen’s Theatre. One of his most important roles there was Amadeus (1982) in Shaffer’s play of the same name, which he later staged at Brno City Theatre. His other important roles were the lieutenant Emil in Slaměný klobouk - The Straw Hat (1987), Bulanov in The Forest (1987), Orin in the play Mourning Becomes Electra (1988), servant Pomet in the play Dundo Maroje (1989) or teacher Kudrlička in Naši furianti (1989).

In the year 1992, Zdeněk Černín left the ensemble of Mahen’s Theatre to work at Brno City Theatre, first as an actor and later as a director. Here, he started off as an actor in the leading role of Nash’s comedy The Rainmaker and in the year 1994, successfully staged the performance Naše městečko - Our Town. His work as a director continued with other performances – Elizabeth of England (1995), for which the protagonist of the leading role, Zdena Hefortová, was awarded the Thalia Prize, Heda Gabler (1996), Othello (1996), Kean IV and Amadeus (1997), The Forest (1998), The Master and Margarita; Naši furianti (1999), Servant of Two Masters (2000), Libuša (with his own text) (2001), Libertin (2002), One Flew Over the Cuckoo’s Nest (2002), Gogol’s The Gamblers (2003), Waiting for Godot (2003), The Seagull (2004).Apart from his activities at Brno City Theatre, Zdeněk Černín also guests in other theatres, both in the Czech Republic and abroad.

The Squabbles of Chioggia

Gypsies are Going to the Heaven

Cat on a Hot Tin Roof