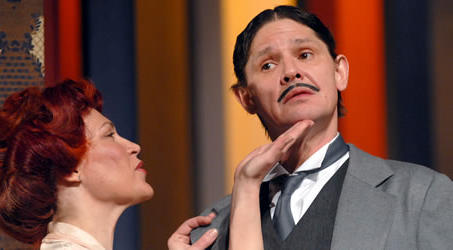 One of the most famous French vaudevilles (comedy with songs) has not lost anything of its vividness and comic until present. Its simple but masterfully developed plot about the wedding of Mr Fadinard and Helen Nonancourt and a straw hat eaten by Fadinard’s horse has reliably made audiences of all nations laugh since it was put on the stage for the first time. And it still attracts and provokes many artists (in the past, the play was successfully adapted by Voskovec and Werich for the Liberated Theatre and by Miroslav Horníček too). The text works with conversation and situation comic and provides an interesting space for both the faces of the comic genre in which there is room enough for wittiness, pleasantly fine salaciousness and salon gentility. The principal comic effect of the text is achieved by an accurate and comedically direct depiction of various human types. However, the most important role is played here by another brilliantly used comedic approach – unexpected blows of despiteful chance events which make fools of many quiet and wise people while simpletons become beings rich in wisdom. The text enables to start playing not only an impish boulevard comedy in a good sense of the word, but also a cheerful and slightly nostalgic “dramatic picture postcard” from the time when honour was worth it to run across the entire Paris and when stupidity and witlessness could really be depicted in the 19th century decorative style …

An Italian Straw Hat has never ended in a vampire trap. It is performed again and again and fills an auditorium with exuberant laughter, mirth, and develops associations in spectators leading to the judgement of their everyday problems.

The Brno City Theatre put on the successful performance of An Italian Straw Hat again at the end of January. The list of its realizers can be characterized as starry.

A typical Czech “buffoonery” is present in the translation by Jiří Voskovec and Jan Werich and the Brno actors handle it sensitively. Stage manager Zdeněk Černín used every comic moment of the play but did not condescend to salacity. Interesting moments were used for the stage and costume design by Jan Dušek. His work of art was bohemized by Alfons Mucha’s motifs leading spectators to the secession Paris. David Rotter, author of music, also deserves appreciation. But it is pity that there were not more vocal parts. Perhaps, it is not necessary to tell the story. But it should be mentioned that the part of bridegroom Fadinard was acted by Martin Havelka, Felix was played by Alan Novotný, uncle Vézinet by Erik Pardus, soldier Emil by Ján Jackuliak, Louisa by Jitka Čvančarová, father-in-law Nonancourt by unrivalled Zdeněk Junák, bride Helen by Lenka Janíková and other roles were acted by well-tried actors with a joyful drive. The Brno presentation of An Italian Straw Hat is not just a brilliant intrigue comedy about the eternal theme of honour, marriage and infidelity, but also an accurate interception of human feelings of the time which did not differ very much from our time in many aspects. A lot of things remained unchanged! Money, cheating, corruption, opportunist politicking, dissembling, lie...

That is why An Italian Straw Hat is still current and attractive.

Martin Havelka acting the title role of bridegroom Fadinard confirmed again that he belongs to the supports of the Brno ensemble. He looks very convincingly, relaxed, brisk, retaining his almost aristocratic gentility. Erik Pardus (uncle Vézinet) along with Zdeněk Junák (father-in-law Nonancourt) cannot deny their comic talents, love of and experience in the given genre. Jiřina Prokšová acting aunt Jiřina is an example of economic acting and millimeter-exact timing. Moreover, she could attract in an inexpressive role of the second plan without treading on the heels of her colleagues, which can be seen very rarely today. Speaking about lovely little roles, I should also mention servant Felix played by talented Alan Novotný endowed with the sense of humour.

To make a good quality fun on the stage is not so funny. And it is known that theatre-goers like picking up comedies from the repertory best. The Brno season which turned to its second half at the weekend offered two famous funny titles: Figaro’s Wedding (1781) and An Italian Straw Hat (1851). Both the world-known comedies have been bearing the banal and didactic attribute immortal for a long time. However, Figaro’s Wedding has not been livened up in Brno before.

The famous farce written by Eugen Labich is staged managed by Černín in Brno in the translation and adaptation by the famous couple of dramatic authors Voskovec and Werich. The Brno City Theatre ensemble has had a long-time experience with this genre to which it returns repeatedly. By the way, the most frequently played French saloon Comedy A Flee in Her Ear has been put on the same stage for ten seasons and in more than one hundred and twenty repeats. Even a telerecord was made.

A crazy chase for a straw hat and the rescue of the virtue of a lady who is not virtuous in fact was immersed in a visual mist of belle epoque. Černín’s cooperator, stage and costume designer Jan Dušek surrounded the stage only with French tricolours. The sweetish secession mist is ensured by superb ladies costumes and posters by Alfons Mucha or period advertisements for sweets.

A strong point of Černín’s stage management is really a fast pace. A boulevard comedy of the best kind is on and the spectator jaded with television varieties asks for a proper portion of pokes, didos and improper bizarrenesses.

And he will have it. For example, in Erik Pardus’s funny performance of hobnailed Vézinet who wants to kiss men around him, or in case of a chaste check of young bride’s buttock after she felt a puncture. Fortunately, Černín did not turn the attractive bride’s buttock to the auditorium.

The spontaneous dramatic creations of this comedy are delicious. Martin Havelka acting a bridegroom plays brilliantly with precarious situation of his own and his adversaries, showing almost his ill nature. This guilefulness suit to the farce most. You will not forget the smart baroness acted by Irena Konvalinová and confusional Viktor Skála. All the named above are experienced enough.

An Italian Straw Hat Suits to the Brno City Theatre

The farce where the title role is played by a ladies straw hat had its premiere in the Brno City Theatre at the weekend. The sitcom one hundred and fifty years old was brought to life there by stage manager Zdeněk Černín and dramatic adviser Ladislav Stýblo.

The stage designed by Jan Dušek uses secession motives. If a reader has the word of secession associated with Alfons Mucha’s posters, he/she has driven the centre. David Rotter’s music also historizes and the final song sounds in the ears long after you return home from the theatre. Actors’ performances at Saturday premiere were at a good level, protagonists stood out, namely Martin Havelka (Fadinard), Alan Novotný (servant Felix), Lukáš Hejlík (lieutenant Emil), Eva Jedličková (Louisa) and Pavla Ptáčková (milliner Clara). The dramaturgy of the Brno City Theatre bet on the well-proven title and this bet seems to pay off.

An Italian Straw Hat Is Tasteful

And so it is eaten. By a horse. Its owner is a philandering wife of a jealous husband who chatted up herself a uniformed lover. The horse owner is an indebted bridegroom of a rich country goose, chased by a bizarre suite of silly wedding guests and his former lover on his wedding day. To prevent a scandal, an identical hat is being looked for throughout Paris, which brings opportunities for a lot of gags, for situational humour brought ad absurdum, for misunderstandings, coincidences and mistakes from which contretemps arise which are so funny that you must laugh even if you do not want to. You are really involved in the play as the continuously running suite of wedding guests runs through a fully occupied raw in the auditorium, communicating with the audience – unageing Jiřina Prokšová acting the part of aunt Nonancourt is lovely. Martin Havelka in the role of bridegroom Fadinard is trying primly to save appearances and solve the problem as soon as possible, but his endeavour is thwarted successfully by Lukáš Hejlík acting scatterbrained and big-headed lieutenant Emil. Modiste Clare (Pavla Ptáčková) is attractive and full of life, Eva Jedličková acting the role of philandering Luisa missing her hat is the type of operetta hysterical woman. Her husband (Viktor Skála) plays out dramatic opportunities with the sense of detail as far as behind the frontier of possible and purposeful (scene with a bowl and an alarm-clock, then with a chair). Alan Novotný acting servant Felix is in the position of a clown whose task is to be a passive victim of surrounding partners’ tomfoolery, which he undertakes with pleasure. Erik Pardus as the deaf but communicative uncle Vézinet had further opportunity to light up in the comedy. The comic of his part is based on the passion to kiss applied implacably to men. This all in the upper crust exaggeration and elegance, without salacious vulgarity, even at the opportunity of actors’ extempores. As a matter of fact, stage manager Zdeněk Černín does not provide any space for that, holding actors well-disciplined. The performance is airy, without deaf places, chic and full of ideas and the actors present it with joy and pleasure. The high spirit of the performance is well completed with the music by David Rotter. Just the vocal final shifts the play illogically and uselessly to other position in the direction of popular musicals. The stage setting by Jan Dušek is witty and simple, soothing the eye with the tasteful harmonization of colours. The use of Alfons Mucha’s posters as the saloon decoration evokes the Parisian atmosphere, but moves the action fifty years ahead. It is surprising that the primitive plot of Labich’s one hundred and fifty years old comedy can amuse the present audiences spoilt with television. But it belongs to such a genre. It is a farce that parodies ordinary people, and that is why it was successful in Paris in the time of the second empire as well as in Prague in the year 1934 in J. Voskovec’s and J. Werich’s adaptation. This adaptation became a basis for the present performance put on the Dramatic Scene of the Brno City Theatre. It does not pretend to being anything else but an easy, tasteful and relaxing entertainment, which was met completely. 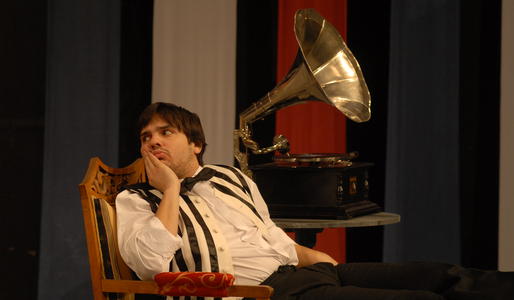 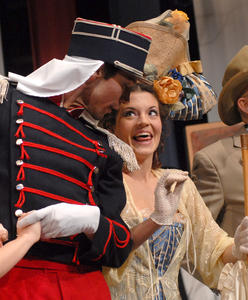 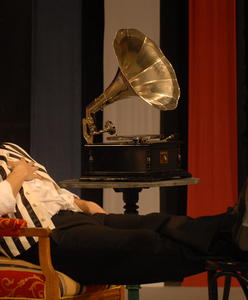 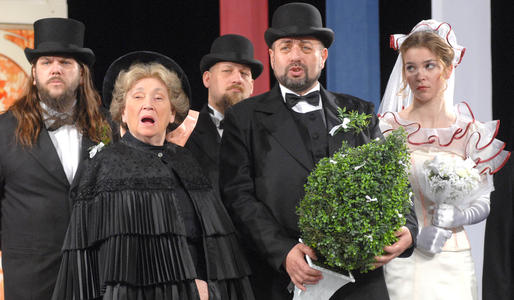 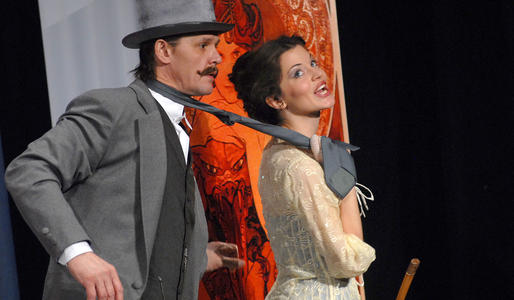 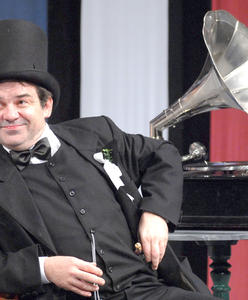 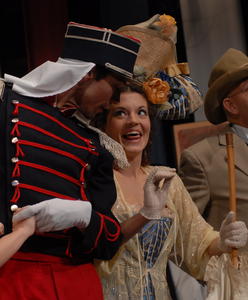 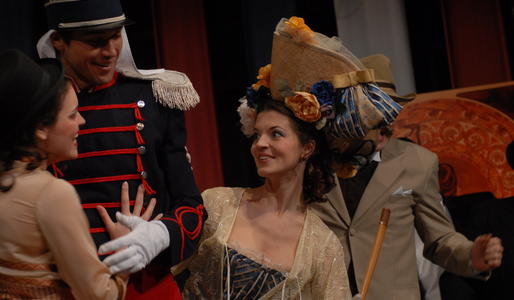 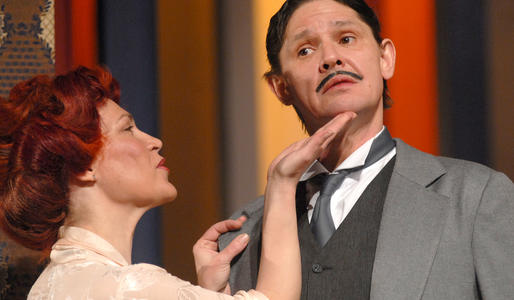 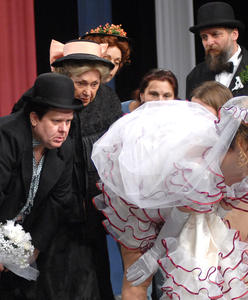 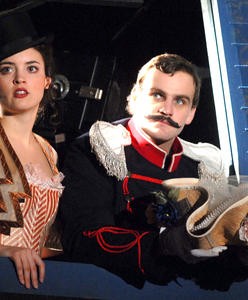 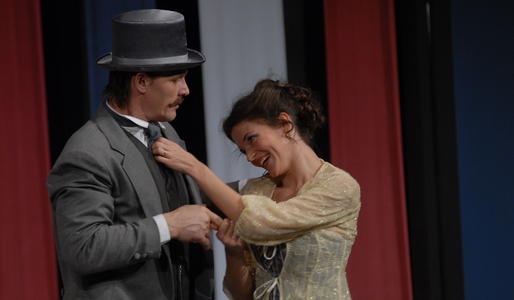