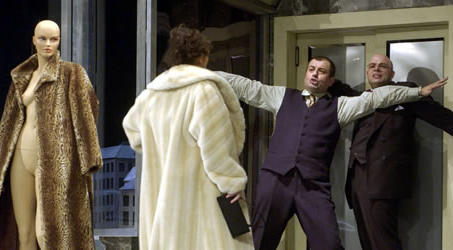 Ray Cooney and John Chapman wrote the comedy “Not Now Darling” almost forty years ago. This brilliant comedy, with mathematically precise construction of plots and absurd situations which do not rustle with paper, was written by the authors for their colleagues – actors, but particularly for audiences of the West End Theatre. The sincerely noisy farce takes place in an elegant fur shop where plots reach the steam point and everybody gets what deserves. Almost nobody likes this type of dramatic production, except all theatre-goers!

Farce Splitting One’s Sides with Laughter Nothing can be done, but the best comedies about sex were written by dry Englishmen. And if the comedies are a little older and in good taste, it is a bet on certainty – well, if you have good actors and a capable director. The Brno City Theatre has both and moreover, they chose the famous play by Ray Cooney and John Chapman Not Now, Darling! The story takes place in a fur salon for higher society and is about the most attractive feature of sex – conjugal infidelity, the play for an arbitrary number of performers. But do not be afraid, there are not so many characters that you might get confused and as the marriage is a tax on the luxury to have children, their motivation will not be strange to you. But the attractiveness of the play does not only lie in brisk dialogues, witty bon mots and artful situations, but also in the charm of actresses the majority of which shows themselves in underwear, and Mrs Čvančarová, the main woman protagonist, spends the most of her time on the stage in a fur coat under which she is almost entirely naked. Besides her undisputable comedic talent she also applies her further merits bringing the greatest pleasure to viewers sitting at the edges of front rows. But let me underline that the play never slips down the level of good taste! Zdeněk Junák and Viktor Skála, who do not practically go away from the stage for the whole time, play really branched roles. The net two hours of laughter will brighten your several following days and you will enrich yourselves for example with the instruction that you should love your wives in an expensive mink as well as in a mangy beaver as it is an extenuating circumstance in case of divorce.

Theatre Is Also a Pleasure and Entertainment

The English kings of laugh tickle the midriffs of spectators with farces in the Brno theatres. Since Skála’s Flea in Her Ear put on the stage of the Brno City Theatre, there was no more exact farce on any Czech stage so beautifully celebrating awkwardness of situations, fulfilling the sense of work of a couple of authors in a better way: “Jokes free from satire, instruction and sapience of Russian classical writers, not substituting editorials in opposing newspapers are brought up to life”, Břetislav Hodek wrote.

Already the entrance of Zdeněk Junák (Bodley) on the stage is imposing. He sparkles with Černín over the text of the play about his own roles in the theatre and since that moment the spectators’ midriffs do not stop swaggering. The masterful Bodley’s move to Janie’s (Jitka Čvančarová) womb and other corners of her body is spoiled by Crouch’s (Viktor Skála) frank awkwardness. Then her husband Harry (Martin Havelka), mafia fop mixes into the action. Exactly timed gags stack up the pyramid of ticklishness. Bras, pants, bodices, stockings fly from the saloon window to a boulevard, often all at once. Even with fur coats. The comic art of Irena Konvalinová (Bodley’s wife) is fully manifested. Eva Jelínková and Zdeněk Bureš (the Frencham couple) are decorated with a discreet grotesque comic.

With the Popular Comedy “Not Now, Darling!” It Is Bearable in Brno

Černín tries to keep a distance from the text. One of the initial monologues is in fact a chain of titles of all performances that are in the repertoire of the Brno City Theatre. Other time, a whole situation is repeated after the catchword “Take it again!” or the audience claps for a literally rapped dialogue.

In a popular comedy, not intellectual pirouettes of direction but mainly a permanent fun – which is in actors’ hands – is in question. All actors are getting on well here. The stage is dominated by charming Jitka Čvančarová, often dressed very scantily. Funny curtness of an English gentleman is brilliantly played by Viktor Skála. Tricked but not improved lecher is performed with zest by Zdeněk Junák. Zdeněk Bureš was brilliant in the rewarding role of a crackbrained mariner. If you want to air your head, go to the Brno City Theatre. It is bearable with the new comedy.

Fun is not only in appreciative escapades when underwear is flying out of windows and attractive scenes when Janie is not shy of uncovering her body, but also in the moments of rest. Černín doses exactly, so slightly static moments, now and there interlarded with an apt reply, have even a greater effect than crazy stunts. Then, the dry English humour comes out, presented by Crouch involved in amorous castling. Although Zdeněk Junák acting Bodley bubbles up with energy, it is just Viktor Skála in the role of Crouche who licks off more cream this time. He seems to follow the action without involvement and his petty comments pronounced as if by the way and without any effort hit the bull’s eye. Similar is the distribution of forces with the ladies’ part of cast. Attractive Jitka Čvančarová in the role of Jean can do with her own charm, superficiality of her heroine, crying and rampant expressiveness, while Miss Tipdale acted by Helena Dvořáková is growing inconspicuously in brilliantly pointed replies and can transform from a grey mouse to an artful beauty. The other actors (Martin Havelka, Irena Konvalinová, Zdeněk Bureš, Eva Jelínková, young Evelína Jirková and Lukáš Hejlík acting on a small area) complete the triangle of more sides in accordance with the farce, willing to submit themselves to its humour. The simple but spectacular stage design by Jan Dušek (guest) should be mentioned too, as well as his costumes with fitting accessories (Harry’s red shoes attuned to his shirt and glasses, Sue’s shaggy footwear in contrast with a disco dress of the 1980’s). Undoubtfully, the “Darling’s” humour will find its audience.

Not Now, Darling! And You Won’t Feel Sorry...

The Brno City Theatre put on the comedy Not Now, Darling! by the couple of authors Ray Cooney and John Chapman as the sixth premiere (December 18 & 19, 2004) of its sixtieth season. Cooney and Chapman are also authors of the comedy 1+1=3 currently presented by G-Studio. After a viewer watches the performance, he/she hardly believes that it was written almost forty years ago.

The fast paced comedy takes place in a luxurious fur salon and the environment gives a feeling of somewhat different moral than you are used to. The primary plot is simple. But what is simple, need not always be plain. It is not difficult to entangle oneself into the network of false statements, which is proved brilliantly in the character of Mr Bodley (Zdeněk Junák) – owner of the fur salon.

Her wife on a holiday, her lover within his reach, it just wants the only thing – a mink fur coat. Thanks to his idea how to buy the fur coat to his lover without any suspicion of her husband a lovely show full of fresh jokes and gags starts playing. This situation comedy has really no weak point not only thanks to the elaborate text, but also due to the direction of Zdeněk Černín, supplier of excellent pieces strongly impressing on viewers. The Brno City Theatre company members share the resulting effect of the play. The action is duly completed with the expressive music by David Rotter which underlines significantly the comedic feature of the play. The protagonists, trying to lie out of unpleasant situations, throw their awkward evasions from one to another as a hot potato. And what caused one is always paid for by Arnold Crouch – coowner of the fur salon (Viktor Skála) supported by cool, schoolmasterlish assistant Ambrosina Tipdale (Helena Dvořáková) who becomes charming, attractive, and I am not afraid to say sexy at the conclusion. The performance of Viktor Skála and Helena Dvořáková is so expressive that it ends up as the focus of the entire play.

The audience laughs and the plot becomes properly complicated, but the construction of plots is absolutely accurate. Finally, everybody gets what deserves - Mr Bodley gets Mrs McMichael (Jitka Čvančarová), Mr McMichael (Martin Havelka) gets Mrs Bodley (Irena Konvalinová), Mr Crouch gets Miss Tipdale. And first of all, they are taught a lesson! The play gives many instructions: When you go along a street, look what is falling down the windows.

Invitation to the Theatre – Not Now, Darling!

Farce, though it may sound incredibly, belongs to the genres which are most difficult to perform. But when actors are able to understand and grasp a good text well and satisfy the requirements of their director, the work is successful. It is proved by the sixth production of the sixtieth season of the Brno City Theatre. It is a boulevard farce Not Now, Darling! written by Ray Cooney and John Chapman (not very well-known in the Czech Republic). The action taking place in a fur salon and the plot concerning the purchase of an expensive fur coat are not profound at all as it befits to a farce, but fresh dialogues (translation by J. Z. Novák), well thought out direction (Zdeněk Černín), accompanied with brilliant performances amuse the audiences since the beginning. The stage and costumes were designed by Jan Dušek (guest), music was studied by David Rotter. Of course, the whole realization team may be excellent but the result is mainly due to actors. At the first night on 18th December 2004 they were perfect: brilliant and charming Jitka Čvančarová and excellent Viktor Skála or Zdeněk Junák playing the main parts, Irena Konvalinová and Helena Dvořáková presenting their admirable performances, Zdeněk Bureš, Martin Havelka, Eva Jelínková, Evelína Jirková, Dagmar Hlavoňová and Lukáš Hejlík introducing themselves exquisitely. Zdeněk Černín, well-known especially as the director of more serious productions, proved that he could master a contrary field too. He is not the only director to do so, Alfred Radok, whose 90th anniversary of birth (17/12/1914) Z. Černín commemorated before the premiere was also able to do so. I thing that the “Darling” will stay long on the dramatic stage. 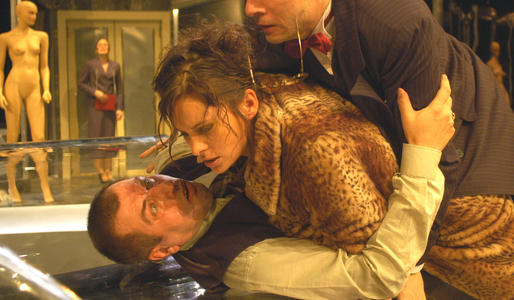 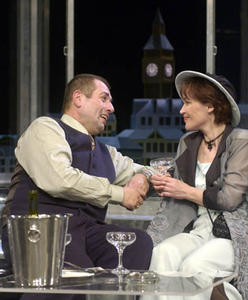 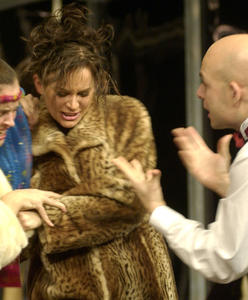 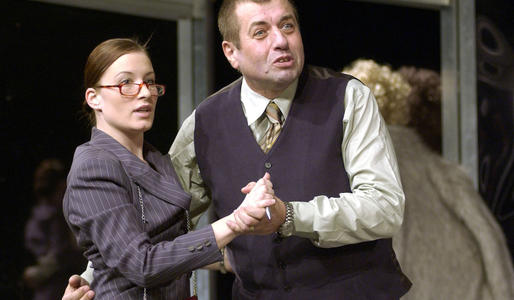 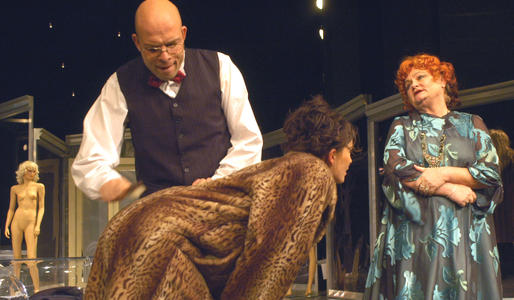 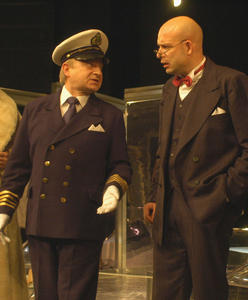 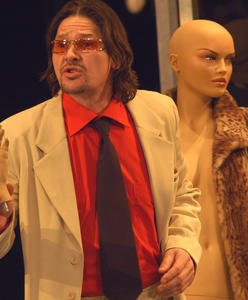 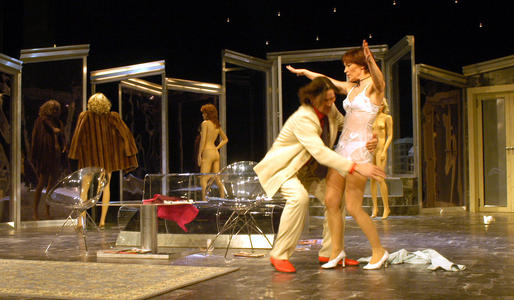 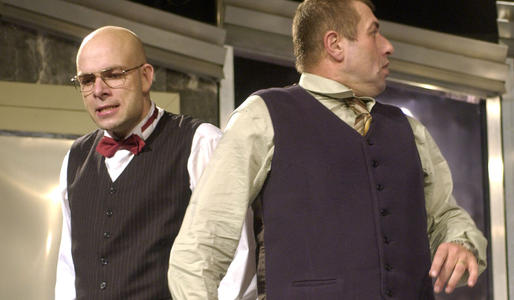 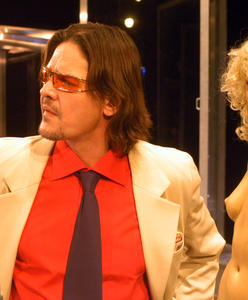 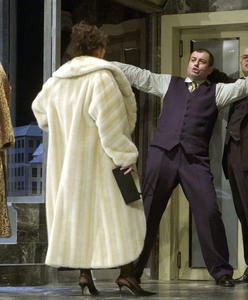 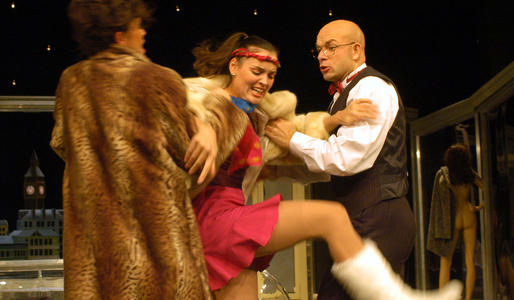