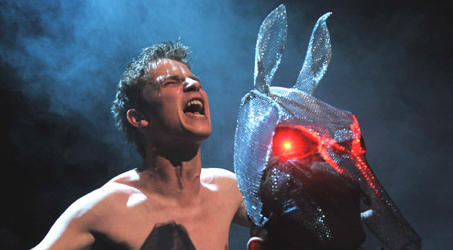 This story about a mysterious god of horses, ailing lives and souls seeking tenderness was created by the author of another famous play, ‘Amadeus’(directed by Zdeněk Černín), which has been performed in the Brno City Theatre for the tenth season with great success.

Equus addresses the exciting topic of emotional derailment, when feelings for others disappear under the pressure of ideology and fanaticism, with tenderness as well as directness. An attractive plot with a hint of a detective story, the poetry of everyday life as well as the rituality of theatre reaching the boundaries of imagination and touching on various great human themes, all these spiced up by unique opportunities for actors to excel – these are the main attractions of this world-famous play directed by Zdeněk Černín.

Between the doubting of one's reason, and burning passion

Eighty-two year old Sir Peter Shaffer ranks amongst the most important British dramatists. Film creators, including Miloš Forman, are often inspired by him. After earlier performances of Shaffer's plays (The Royal Hunt of the Sun, Black Comedy, Amadeus) by various ensembles, it is surprising that it's taken this long for the Moravian metropolis to encounter the older, world-famous drama Equus (1973), which was staged by the Drama Theatre at Brno City Theatre in the middle of February this year, quite some time after its Czech premiere in Ostrava (1979) and other performances, also by amateur groups.

This piece with its attractive topic, inspired by a story of a seventeen-year-old, Alan Strang, who is an only child and who, seemingly for no good reason, blinds six well-loved horses at a farm, takes place in a provincial medical institution where the young man's opponent is a psychiatrist, Martin Dysart. Zdeněk Černín (who staged the still-performed Amadeus at Brno City Theatre) has altered and significantly shortened a thirty-year old translation by Ivo T. Havlů with the dramaturgical cooperation of the very knowledgeable Jiří Záviš. Perhaps he could have been even more radical because behind the complex, philosophically and psychologically well-researched original hides the risk of producing something which is at once epically static and highly verbose - it is hard to avoid this and produce something suitable for performance on stage. Of great help in this task was the well-proven production team: David Rotter, composer of the varied (and not only) background music, the choreographer Libor Vaculík and mainly the scenographer Jan Dušek. The bleak, abstractly universal space with two converging walls and an adjustable horizon, using a turntable and only the most essential equipment, enables the blending of the retrospective sequences in place and time. It deals with the transitions between the de-personalized reality of a hospital and the magical, animal world of the stables, and also with the tricky portrayal of the horses and masks with glowing eyes. The short, two-part evening, which deserves closer analysis, is well accentuated by the contrast between the dominant psychiatrist, who is burnt out both professionally and in his married life (played by an experienced actor of self-scrutinizing and ambiguous characters - Viktor Skála), and the distinctive "Dionysian" mysticism of a fallen teenager (a gifted novice of the ensemble - Vojtěch Blahuta); other characters also acted well (Hana Holišová, Pavla Vitázková, Josef Jurásek, Miroslava Kolářová and others). This teenager is not only a subject undergoing specialised care but mainly a catalyst of the doctor's tormented ethical and existential doubts which have lasted for many years. Z. Černín alternates Skála's sparingly lit, discursive monologues with expressive scenes which are almost ritually ecstatic (the visually impressive ride on the beach, the adoration by night of the god-like Equus, the stylized massacre), which uniquely appear almost as if from a variety-show (the dance of horses). This poly-thematic performance of minimalist stage conception can get under the skin of a perceptive spectator most deeply and for a long time.

What horses' eyes were not supposed to see

The name of a playwright is commonly connected with his most famous works. Peter Shaffer is well known mainly for his theatre play Amadeus. On top of that, audiences also connect him with the film version of that work by Miloš Forman. However, the inhabitants of Bratislava connect him more with a performance in which Mozart and Salieri were played by mature actors Milan Kňažko and Emil Horváth

It is interesting that Shaffer's play Equus, which was shown on Broadway six years earlier than Amadeus, is more famous. It shocked spectators through its simple urgency and the psychological depth of the story.

The story takes place at a farm where horses are kept. There, seventeen-year-old Alan deprives six horses of their eyes. After this unusual crime (inspired by a real event) Alan is brought for psychological examination to Doctor Dysart, who is supposed to discover the cause of this terrible act.

At Brno City Theatre, the performance of the psychological drama Equus has been prepared by the experienced director/actor Zdeněk Černín. I have written director/actor on purpose. His direction is always highly dramatic. He is inspired by the many years of his own acting experience and from the actor's natural need to express him or herself through the characters played. His work is without unnecessary visual elements, without complex temporal and spatial structures on the stage. The actors under Černín's direction act in such a way that the spectator has a feeling that the situations couldn't be dealt with in any other way. A close actor-spectator relationship is generated, and a harmony arises in the feelings and situations they experience together.

The psychiatrist (Viktor Skála) and his patient (Vojtěch Blahuta) examine each other at the beginning, without much trust, in order to get to the roots of the tragedy in the end. However, it isn't only the psychiatrist's revelation of the motive behind the horrible deed of the young man who adores horses too much. It is also the revelation of a "burnt-out" man, the psychiatrist. The mysterious deity of Equus, hidden in the eyes of horses, will help to reveal not only the young man's terrible act but also the loss of energy and perhaps also identity of the doctor, a person who is a normal, orderly member of society and who has not yet accepted that he has nothing and no-one to live for.

The English playwright Peter Shaffer, whose piece has been excellently translated by Zdeněk Černín, has really managed to strike deep at the audience with this play. He has managed to make them experience, together with the protagonists, a complex and yet understandable tragedy of people who had no idea where people can end up due to lack of communication, understanding and the inability to talk. And it isn't only the case of Alan and the doctor, but also the parents of the young man (Miroslava Kolářová, Josef Jurásek), his almost-lover Jill (Hana Holišová - whom I saw, in alternation with Hana Briešťanská), the judge (Pavla Vitázková) and the owner of the stable, performed by Robert Jícha. Everyone, through their realistic and deeply true acting performances, contributed to the feeling from the play. The functional scenery and costumes by Jan Dušek and the impressive music by David Rotter contributed, of course, to the fact that the play Equus is an integral whole with a unified, though not explicit result. One question remains in the air: who is responsible for the misunderstanding which produces such lost and abandoned people? To be sure, nobody wanted to harm anyone on purpose. All protagonists had the best intentions. Nobody was bad. They simply didn't concern themselves enough with their surroundings.

And so the play has an ethos within, something Aristotle would call anagnorisis, which will hopefully plant a little seed in the spectators' minds at the end - a humanistic message. Brecht considered theatre which does not educate to be useless. Even though we don't need to agree fully with this theory, in the case of Equus Brecht could be satisfied, and strongly. It could be seen on the faces of the spectators as they were leaving Brno City's Drama Theatre. 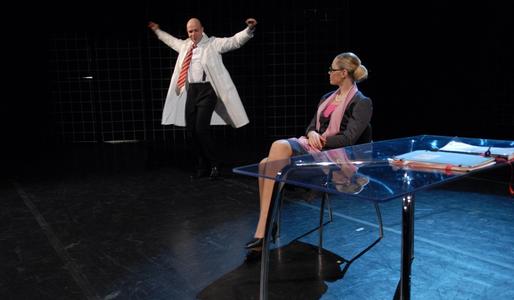 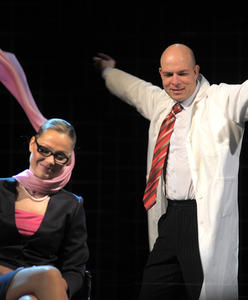 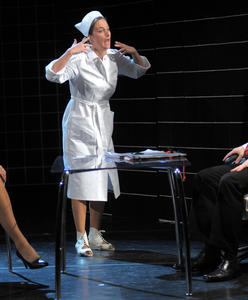 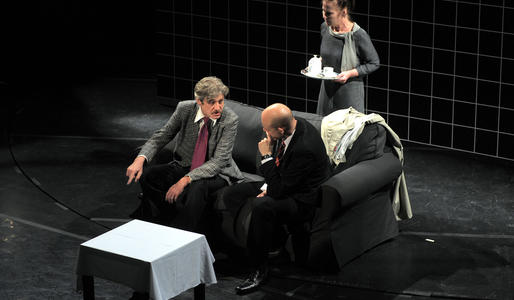 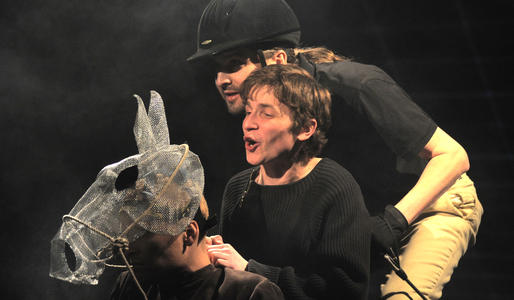 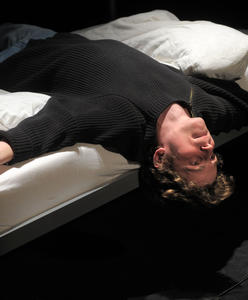 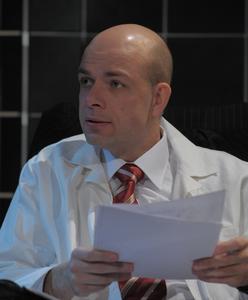 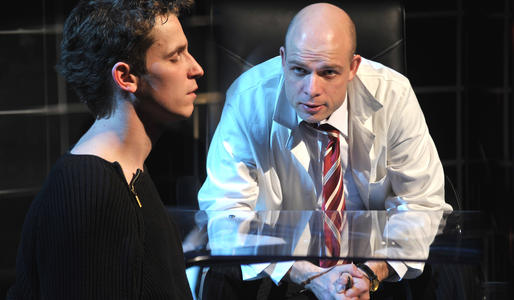 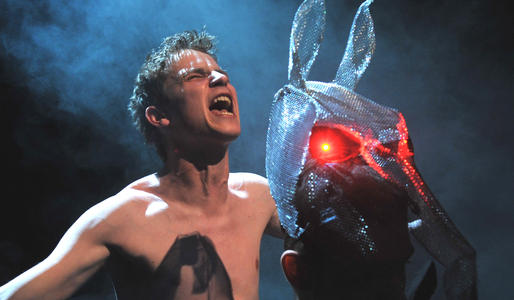 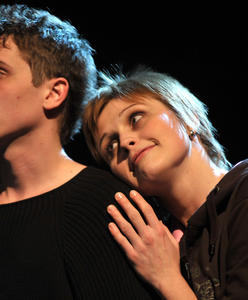 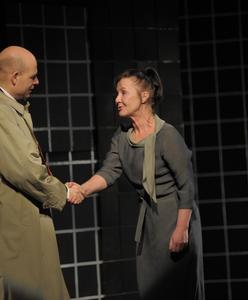 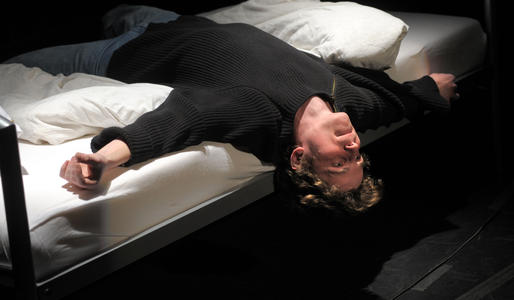