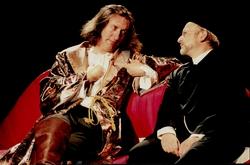 The outstanding Czech actor Boleslav Polívka is particularly well-known as a clown, mime, and comic of televised “arenas” and as a film actor. On the stage of the Brno Municipal Theatre he presents himself in a rather different role. The director Zdeněk Černín bet on Polívka’s dramatic qualities and assigned him the role of the legendary English actor Kean. A story of friendship of the genius coming from a well-known dynasty of actors and the Prince of Wales inspired the dramatist Grigorij Gorin. The Russian author of comedies created a thrilling story of great love and lovelorn feeling, great talent and its later decay. Gorin’s witty play is a guarantee of good and intelligent entertainment and in the first place of excellent and unusual theatrical creation of Bolek Polívka and his co-actors.

Polívka Remains a Star Even in a Classical Play

…Polívka fully savoured in his Kean the validity of saying “What will not kill you, will make you stronger”. Meeting the classical text, he came out immaculate with any doubt on his theatrical shield and the Municipal Theatre acquired another hit into the repertory...

...Černín assigned the title role to Boleslav Polívka being convinced that the legendary actor must be represented by a performer who himself has already become a legend… Polívka is moving with virtuosity on the edge of dignity and hackneydom, masters back-to-back moments of megalomania, self-irony and comprehension, handles the role perfectly from the technical point of view...

The Actor Kean Reincarnated in Polívka

…Polívka does not reflect his own problems in the Černín’s mise-en-scene as it has already been said. Actually, he is Kean. He creates him right in situations, in the atmosphere of the play, in every moment. He is equipped with the capability of identifying himself with the figure, simultaneously maintaining a distance of it. He is also able to interpret what we have got to know about Kean at present. His Kean provokes admiration, envy, compassion, hate. And illusions which may only be created in the theatre...

… Acting the contradictory figure, Polívka is absolutely convincing. The spectator links easily both the strong personalities … The first-night audience liked the play very much last weekend, surely also thanks to the music composed by Miloš Štědroň.

A Parable about Real Life Values

…A happy constellation of the production team gave birth to an ambitious presentation in Brno celebrating theatrical magic while being aware of its reverse face. It gives an uncommon opportunity to Polívka’s character-making art and undoubtedly, it will attract theatre-goers for a long time...

…The director’s happiest choice was that of assigning the part of Kean to Bolek Polívka. The choice seems to be completely unprompted and spontaneous as the best thoughts coming in unguarded moments use to be...

Crowds of Theatre-Goers Will Go to See Kean

…The team of authors (director Zdeněk Černín, scenic and costume designer Jan Dušek, composer Miloš Štědroň) provided the actors with a large space. Dušek has chosen a theatrical means for “a theatre in the theatre”– a curtain which movement can create an atmosphere of grandiosity. The backcloth with a picture of auditorium draws an audience in the play. Even other scenic elements are used by the director to surprise the audience. The stage opened towards the auditorium forces the audience to engagement, theatrical illusions are intentionally disturbed. Their polarity is balanced, there is no time to get bored...

Polívka Is a Moravian Kean

…Polívka’s Kean is a magician with elongated, pointed voice expression (typically nasal), nonchalant gestures and dandiacal movement. He is successfully seconded by Zdeněk Junák acting the part of King Henry IV. It is a pleasure to see the last scene of both rivals planning the last grand spree... 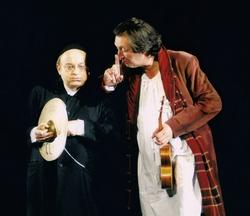 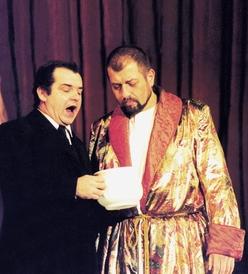 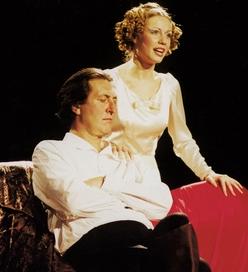 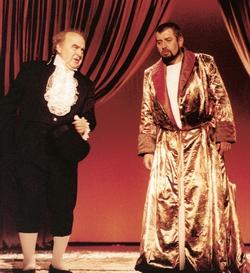 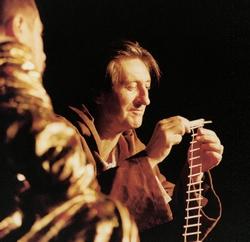 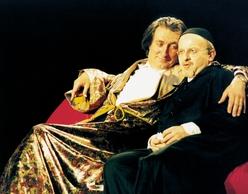 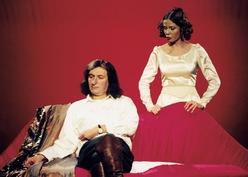 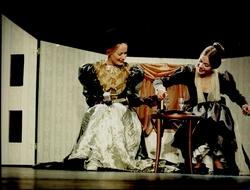 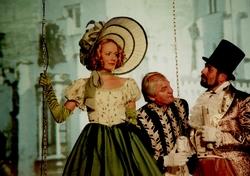