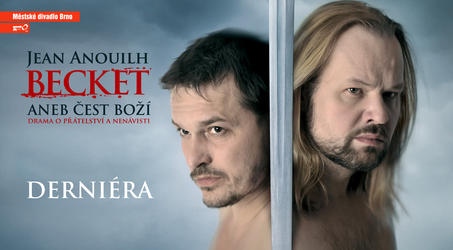 A historical drama on searching for and finding oneself

Anouilh’s famous play has been an adornment to the world’s stages for a good half-century already, and it doesn’t seem to want to go out of date. This is probably due to its wisdom. The drama on a theme from English history (12th century) employs the “theatre within a theatre” technique in the telling of this evocative, exciting story of the friendship and later rivalry between Henry II Plantagenet and his pal, the Anglo-Saxon feudal lord Thomas Becket. The noble Becket is forced to walk a tightrope in order to keep his privileges: he’s young, frivolous and wants to live and have fun – up until the moment when the king compels him to take up the office of Archbishop of Canterbury, the head of the church in England: “I was a man without honour, and suddenly honour I found, fragile and vulnerable as a child, the honour of God. And this is still also my honour.” Translated into normal words - Becket finds the lost dignity and decency that he owes himself. For this honour Becket sacrifices comfort, property, the friendship of the king and, in the end, his life. In this drama, within which Anouilh’s elegant ability to depict politics with spirit and excitement, dry humour and brilliant conversational polish oscillates between jokes and philosophical meditation, between tragedy and comedy, enlivened by the theme of the rebellion of an individual against the status quo, the loneliness of one person amongst many, the relationship between human privacy and the world…

The work of prolific French writer Jean Anouilh, called the “Moliere of the 20th century” for being the author of approximately forty plays, appears quite often on our stages. This is also true for Brno City Theatre which has shown titles such as Antigone, The Waltz of the Toreadors, Traveller without Luggage, Romeo and Jeannette and The Rehearsal during its fifty years of existence. Two years after Milan Páska’s excellent production (and six years after Srba’s production on the drama stage of the National Theatre), the famous Becket or the Honour of God (1958), which was also made into a film, has returned to the stage here. Anouilh called it a “costume drama”, and it had its Czech premiere in a translation by Milena and Josef Tomášek at the Prague National Theatre in 1969.

With a Shaw-like view on things, this brilliantly written text is inspired (without any claims to hundred per cent accuracy as far as the facts are concerned) by 12th century British history. Anouilh chose the attractive story of the antagonistic relationship between King Henry II and Anglo-Saxon nobleman Thomas Becket, who is a loyal and close friend of the ruler and who becomes, against his own will, an energetic chancellor and even an ascetic Archbishop of Canterbury. It is within the self-sacrificing execution of his office that he finds his true mission (the honour of God also becomes his honour), and so he is assassinated right in front of the altar and shortly afterwards proclaimed a martyr and saint. Even though the playwright has naturally given some attention to the intricate social, political and religious relationships of the period, he is primarily interested in the timeless human element – the peripeteia of a fateful conflict between two opposite personalities which one of them pays for in the form of a tormented inner loneliness and the second one, in the end, with his life, demonstrating the kind of “woe that comes from friendship”.

Dramaturge Jiří Záviš, who has created a very thorough programme, as always, has chosen an ad hoc newly acquired translation by the Prague actor Jiří Žák (they worked together during the recently introduced Veber play The Dinner Game) which didn’t get rid of the controversial vulgarisms but otherwise (in cooperation with the director and his son) notably shortened the play. Even so, four acts in twenty-three occasionally changed scenes stretch to a two-part, three-and-a-half-hour-long evening. A Slovenian team was invited to take care of the production side – versatile Ljubljana theatre man Janez Starina, who has already guested twice at Brno City Theatre (The Marathon Runners Run a Victory Lap, Barillon’s Wedding), scenographer Jože Logar and composer Mirko Vuksanovič, while the costumes were designed by the theatre’s proven creative artist Andrea Kučerová. The non-descriptive, sparsely-lit stepped structure with wire mesh gradually plays host to the majority of the author’s retrospectively evoked lines of thought, themes and motifs, held together by a circular composition. It doesn’t, however, seem that any of them lie in the focus of the director’s interest to such a degree that he could use them as the building blocks to create a unified, clear and original interpretation of the piece. Some individual sequences thus succeed in engaging the audience (for example, the final meeting of the two rivals upon a freezing, windswept plain), while others (the Pope’s palace in Rome, scenes with the English church hierarchy and the barbarian barons) are not far from being needlessly over-simplified.

The main benefit gained from the long production remains primarily some of the acting performances. Together with several others (Viktor Skála’s casually pragmatic French King Louis, Pavel Kunert’s foresightful and ancient Archbishop and Hana Holišová’s sincerely loving Gwendolin) the two charismatic, award-winning leading actors are cast in a dramatically-rewarding relationship with a feeling for the ambivalence of the characters and their mutual connections. Petr Štěpán’s attractive, egotistical Henry, from whose point of view the author presents the story, is a dynamic figure on the outside, at first an irresponsibly moody carouser and later an internally-tormented loner. The author offers a different developmental curve for the more introverted and existentially minded role of Thomas Becket, in which stalwart Petr Gazdík allows us a sensitive look into each of the three thematically-linked phases of his journey of initiation to self-understanding and firmly-anchored surety.

This new Anouilh premiere on Lidická St. may not feature an exceptionally characterful interpretation of the well known work; however, the impressive key creations do attract the public, and deservedly maintain their interest.

Friendship amongst the machinery of politics

Vít Závodský 5. October 2010 zdroj Týdeník Rozhlas
Twenty years after Milan Pásek’s excellent production, the famous play by prolific French playwright Jean Anouilh, Becket or the Honour of God (1958) has returned to Brno City Theatre. Experienced dramaturgist Jiří Záviš asked Prague actor and novel writer Jiří Žák for a brand new translation, and asked Ljubljana actor Janez Starina and his Slovenian artistic and musical co-workers for the production of his shortened adaptation.
The cleverly written, conversationally tuned original, which was also made into a film with many sharp paradoxes comes, with a certain amount of factual licence, from 12th century English history. It involves the later-canonised Thomas à Becket, Saxon courtier and loyal friend of King Henry II Plantagenet, who walks the steep and narrow path of being the ruler’s companion, chancellor and the Archbishop of Canterbury and eventually dies in his cathedral as a martyr. The dramaturgist is attracted by the timeless aspect of inconsistent friendship between two contradictory characters, the topic of seeking oneself and finding one’s own dignity in the consistent fulfilment of a higher calling, and has less interest in the labyrinth of political and clerical intrigues of that time. These key motifs of this retrospectively composed, three-hour-long evening are represented with dramaturgical experience, solidly and sometimes impressively (the last dialogue of the lone rivals on a windy plain) on a dark, vertically structured set strung with wires. However, the directorial interpretation of the whole is somewhat lacking in character – if we, of course, don’t see it e.g. in the burlesque clowns via which a whole queue of episodic characters are connected with growing monotonousness. The main asset of the production thus lies in the solid, and in some places even above-average acting component. Alongside the tried-and-tested Viktor Skála (the irony-dripping French ruler, Louis), the spectators can enjoy the ambiguous creations of two theatrical award-winning actors who both understand each other well – Petr Štěpán in the character of the explosively moody but intellectually submissive Henry, consumed by jealousy, and Petr Gazdík as the introverted, strong title character who undergoes a difficult developmental curve.

Jean Anouilh: Becket or the Honour of God

David Kroča 1. June 2010 zdroj Český rozhlas 3 - Vltava
Even though more than half a century has elapsed since the first performance of this play by Jean Anouilh, there is no doubt about its constant relevance. Politics, bribery and profit-seeking strategies are topics which have always been appreciated by theatregoers, and these themes are presented in an attractive story about the fateful encounter of two great characters from English history: King Henry II and the saint-to-be, Thomas Becket.
The guest Slovenian director Janez Starina concentrates mainly on the complicated and, in fact, intimate relationship between the two men, who are trying to find their path in life each in their own way. He mainly follows the development of this relationship, which gradually unveils other timeless topics. At first, Becket stands by the King as his chancellor and also as his faithful friend in drinking and love adventures. Later, when the King appoints him to the post of archbishop, the former friends turn into relentless enemies. The production also speaks about how difficult the journey is to getting to know one’s own self as well as finding one’s place in life.
Despite its length, the production gets under your skin. This is particularly thanks to the acting performances, which are dominated by the two actors in the main roles. Petr Štěpán as Henry II is a down-to-earth man who acts instinctively because he has power but not the needed education or manners. He punishes Becket even though he still loves him because this is what his offended vanity tells him to do. Petr Gazdík also created an ambiguous character in Becket. He first tolerates his King’s vagaries, but as a cleric, discovers a natural calmness and self-control within himself. Gradually, this wasteful, fun-loving companion becomes an ascetic who defends the honour of God even at the cost of his own destruction.
One more reason why it is worth it to see Becket in Brno - apart from the masterful work of the actors, there are impressive artistic scenes which the director created with the aid of clever lighting and particularly the allusive stage designed by leading Slovenian scenographer Jože Logar. When both protagonists meet for the last time, their bodies are surrounded by chilly fog, and when Becket sits down at a feast with invited paupers, the image is reminiscent of the last supper of Jesus with the apostles. The production is thus a compelling show, which isn’t completely commonplace in theatres these days. 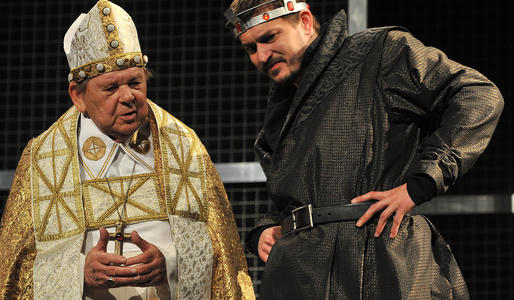 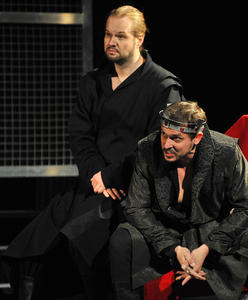 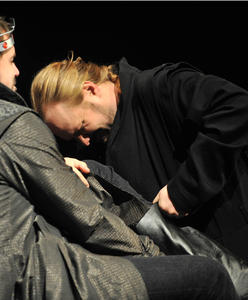 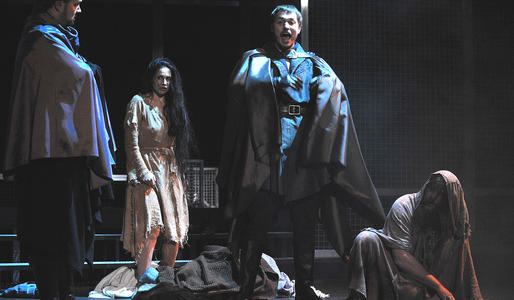 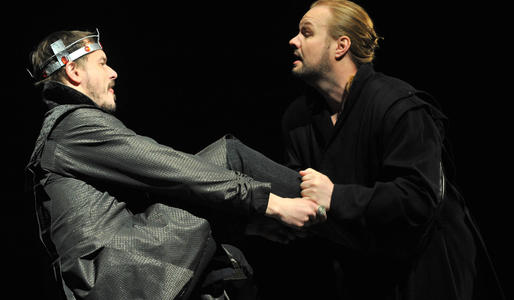 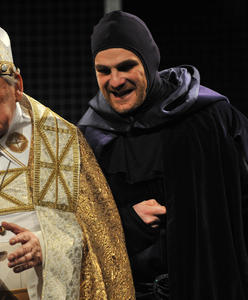 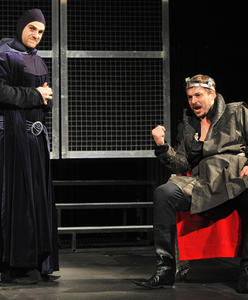 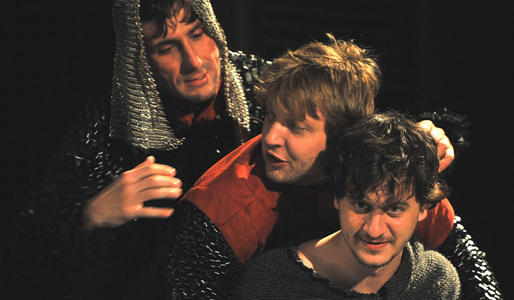 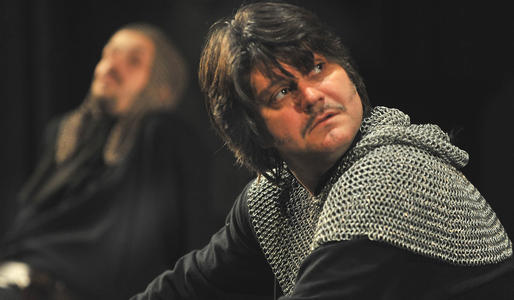 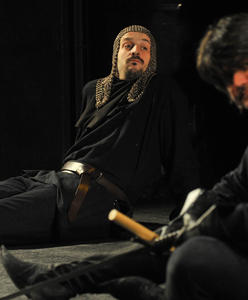 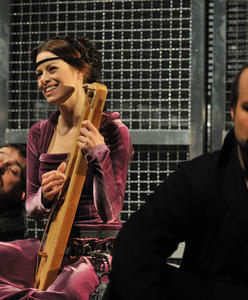 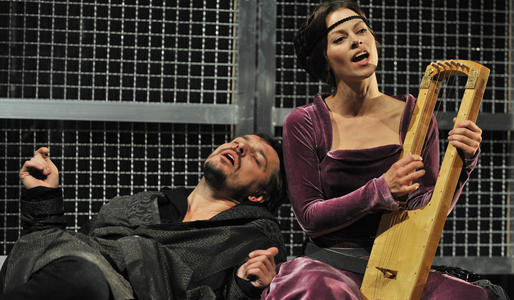