The Book with No Name 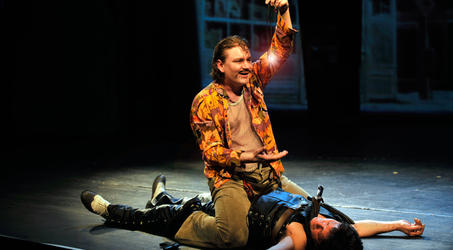 This dramatization of a magically sensational novel by an unknown American author (it’s not that he is known only a little, but he is completely unknown – it isn’t known generally who is the real author!) who hides under a mysterious pseudonym, ‘Bourbon Kid’, is remarkable for many reasons. The novel tells an intricate story about a gem of extraordinary value which can guarantee immortality to its owner and which was stolen from the Habals, a peace-loving order of monks.

Those who set off to find it discover that the trail leads to the strange, totally sinful and spoilt Mexican town of Santa Mondega. This is only the beginning of a parodical, entertaining and inventive theatrical spectacle in the spirit of Quentin Tarantino or Robert Rodriguez films, which plays with elements from the thriller, action film, vampire horror and western genres, and where the Asian martial arts of Shaolin monks meets the damned fast pistols of who else but the unbeatable gunman Bourbon Kid!

The Book with No Name by the mysterious Bourbon Kid

Petra Samsonová 21. April 2011 zdroj Kult
The Book with No Name by the mysterious Bourbon Kid
Vampires, gangsters, monks, loud shooting, splashing blood, bitingly witty dialogues, bad language, sex, wrestling, Elvis, Mexico – all this is contained in The Book with No Name
If you think we’re talking about a new “B-movie” by Robert Rodriguez or Quentin Tarantino, you are mistaken. It is Brno City Theatre that is tempting you to the world premiere of The Book with No Name by director Stano Slovák. At the beginning of April the theatre increased its repertoire with the addition of this vampire-gangster comedy written by an unknown author who writes under the pseudonym Bourbon Kid. The author maintains his anonymity so perfectly that he has also used his pseudonym as the name of one of the main characters of his work – a man who cannot be killed. However, the identity of the person hiding behind this name remains a mystery for the whole world.
The Book with No Name will surprise you right from the beginning with its deafening shooting, projected film animations (Petr Hloušek) and mainly by its frequent scene changes (Jaroslav Milfajt). The frequent fade-outs may be a bit bothersome at the beginning but they create the atmosphere of quick film sequences excellently, just as it is in B-movie action thrillers and horrors. You will take a look inside a monastery full of dead monks and quickly move to the bed of the main couple of lovers and then, just as things are getting interesting, appearing in the sheriff’s office or in a spittle-flecked Mexican pub.
It only takes a short while to get to know all the important characters and story lines - and there are quite a few of them. However, you don’t need to worry that you might get lost among them as, thanks to the selection of distinctive acting personalities and a well-written script (Petr Štěpán, Jan Šotkovský and Stano Slovák), the performance flows very smoothly. Some scenes, particularly with the monks Kyle (Jaroslav Matějka) and Pete (Jakub Przebinda), guarantee cannonades of laughter. The main roles of the young lovers – receptionist Dante and chambermaid Kacy – were played by Michal Isteník and Evelína Kachlířová. Both of them deserve an A grade (Michal Isteník even A+) for their performance. Martin Havelka in the role of contract killer Jefe is also hard to overlook.
The high-quality “B-movie” performance by Brno City Theatre may well attract mainly a younger audience to the theatre but it certainly won’t displease oldertheatregoers. At the very least it will familiarize them with current film (and now perhaps also even theatre) trends.

Premiere of a nerve-racking vampire-gangster comedy

Jiří P. Kříž 11. April 2011 zdroj Právo
Premiere of a nerve-racking vampire-gangster comedy
Crazy gunfights, brutal wrestling matches, gangsters from Mexico, Shaolin monks, bloodthirsty vampires, avengers and also brave mortals can be found in the Book with No Name by the world-famous anonymous Brno writer, Bourbon Kid, and his scriptwriting helpers Petr Štěpán, Jan Šotkovský and Stano Slovák at Brno City Theatre.
It is tricky and treacherous to take inspiration from Quentin Tarantino when creating a theatre production; however, Brno has managed it excellently. Instincts, passion as well as philosophical depth all thrill the audience. A stone called the Eye of the Moon (after which the Czech translation of the book, Měsíční kámen – ‘’The Moon Stone’’ is named) becomes the target of vampires during a lunar eclipse, triggering a fight between the powers of good and evil. Yes, this production is a skilled parody of the Lemonade Joe kind, with witty dialogues and conflicts that escalate into absurdity thanks to a large helping of hyperbole.
The author of the original, who makes himself out to be a mysterious gunman who cannot be killed, will certainly become recommended reading. The dramatizers of the famous books by Bourbon Kid describe the genre of the story somewhat humbly as “silliness”.
The set by Jaroslav Milfajt, looking as if it were cut out of a village by the Mexico -Arizona border, was reinforced by animations by Petr Hloušek, who is a master in the area of the digital completion of theatre scenery. Composer Karel Albrecht combines his own horror and Tao inspiration with country music, and Andrea Kučerová’s hyperrealistic costumes range from police officers through desperados up to vampires.
It is important for the actors in such pieces not to succumb to the lure of ironic overacting. As far as this aspect is concerned, the best actors were Michal Isteník with Evelína Kachlířová in the roles of normal citizens Dante and Kacy, as well as Petr Štěpán (Father Tao), Jaroslav Matějka (the monk, Kyle), Martin Havelka (the hired killer, Jefe) and Ladislav Kolář (renowned fighter Rodeo Rex).
Parody, sometimes even quite seriously intended, can work on the Czech stage. Brno’s Book with No Name is one of those works that are meant to entertain and amuse, and it does so with remarkably refined professionalism. 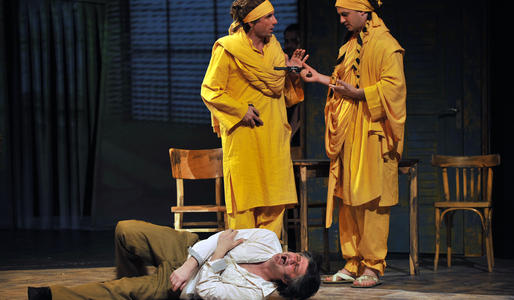 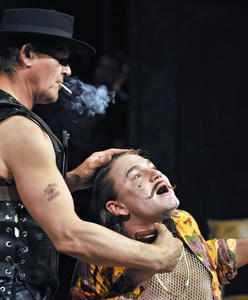 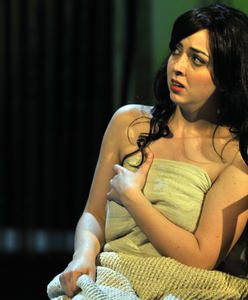 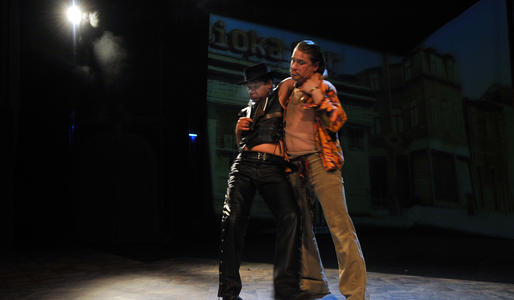 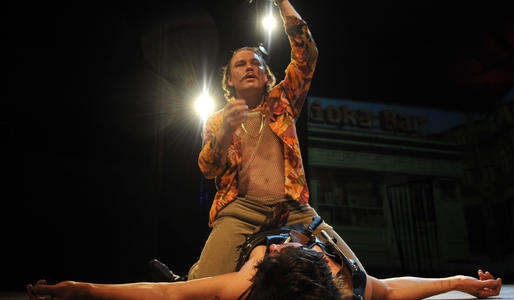 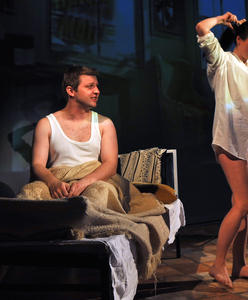 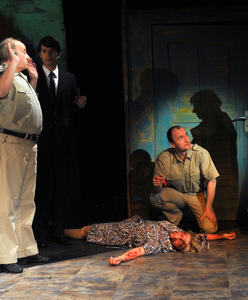 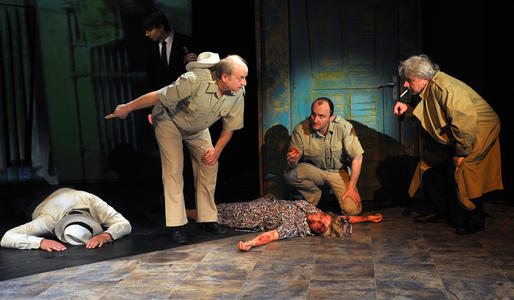 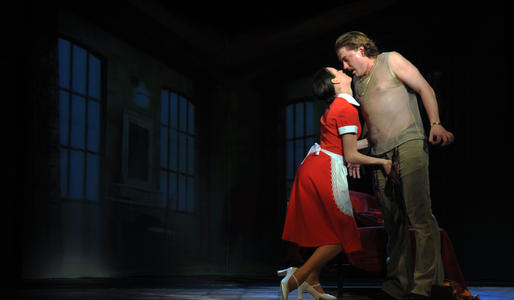 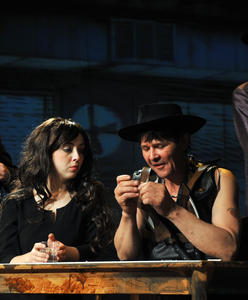 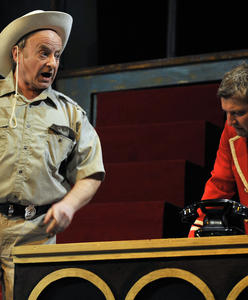 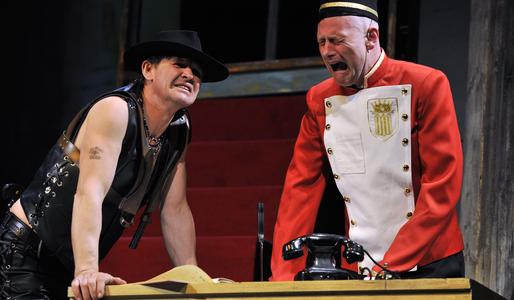