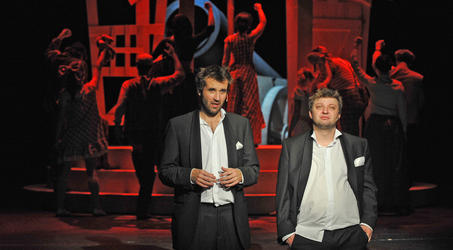 Jiří Voskovec and Jan Werich´s plays may seem to be inseparably linked with the characters of their authors, but on the other hand, they have long been firm favourites with Czech drama enthusiasts. Heavy Barbora surpasses all of V+W’s other works with the brilliant humour contributed by both authors and with its completely magical and timeless message. The story is set in the small Dutch town of Edam, where the town councillors are constantly arguing, rotten with corruption, cheating and intriguing. The local teacher, the most honest person in the whole play, doesn’t know how to cope with this situation. In the end, faced with danger from the mighty neighbouring land of Yberland, the people of Edam unite and show unexpected will and cohesion with significant help from two runaway Yberland mercenaries who join them. The variety of three-dimensional comedy characters and figures, Voskovec and Werich´s renowned humour and Ježek´s immortal hits such as Holduj tanci, pohybu, Vy nevíte, co je středověk and Sláva mu, on je pašák – these are some of the many reasons to welcome Heavy Barbora at our Drama Theatre.

Brno City Theatre’s musicals team doesn´t just put out opulent musicals. Werich, Voskovec and Ježek´s Heavy Barbora - the penultimate production shown at the Liberated Theatre in 1937 before its licence was taken away the following year and it de facto disappeared - has now become something of a still attractive but more restrained counterweight to the theatre’s grander titles. Director Stano Slovák and his team presented it to contemporary spectators in the intimate surroundings of Brno City Theatre’s Drama Theatre.

Heavy Barbora is a play which fully reflects the beginning of fascism and its ruthlessness. It is also often said that it carries a timeless message. In Brno, however, it is played more as an optimistic comedy about how it is necessary to look after “Edam democracy” and keep things in good order, and that this can be done with humour. Some may consider it an adequate rebooting of V+W’s classic work, others may not. For those in the latter group, Jaroslav Ježek´s hits such as Holduj tanci, pohybu, Vy nevíte, co je středověk and Sláva mu, on je pašák will certainly fill their feeling of emptiness. The Brno production handled the difficulties concerning datedness and V+W´s artful proscenium performances in their own way. Michal Isteník starred as “Werich” in the role of himself as well as the First Mercenary, while Jiří Ressler was “Voskovec” and the Second Mercenary. Both of them open the play with their own proscenium performance in which they play themselves; they don’t try to copy the original in any way but rather aim to get the spectators tuned in to their own kind of humour and gentle improvisation. I think this is clever ploy, as they both manage to hold the interest of the audience and one doesn´t feel like this venerable classic is simply being dusted off.

This impression is also filled out for the audience by Jaroslav Milfajt´s stage arrangement – he has created playful scenery from light-coloured wood which reminds one of a construction set for children. The spectators’ comfort is reinforced by the acting performances, which confine themselves to typically mocked human types such as the indecisive mayor, the weak governor, the jovial cheese maker, the cheeky servant, the timid teacher... Simply the usual gentle, non-critical and harmless sort of peculiarity. The myriad comic performances offered here by Zdeněk Junák as the mayor, Patrik Bořecký as the governor, Lucie Zedníčková as his wife, Vojtěch Blahuta as the teacher and Ladislav Kolář as the lord of the manor stick to this ‘blueprint’ completely.

Another of the positive aspects of Slovák´s restrained and in no way iconoclastic production is, apart from Michal Isteník and Jiří Ressler´s proscenium performances, the refreshing old-time mix of Ježek´s hits delivered by a live orchestra.

I went to see the premiere of Heavy Barbora at Brno City Theatre’s Drama Theatre filled with uncertainty and doubt. I had downloaded Heavy Barbora beforehand from YouTube – a production by the Divadlo Komedie theatre, and I was now worried as to whether the premiere would be successful...

The first point in its favour was the choice of stage. Even though musical comedies have their home at the large Music Theatre, the more intimate environment of the Drama Theatre is much more suitable for this piece. Also, Jaroslav Milfajt´s stage set is well executed, taking its inspiration from the simplicity and expedience of Voskovec and Werich’s original decorations. Another plus is Jan Šotkovský´s dramaturgy. I can feel the fine tuning of small details in which director Stanislav Slovák and the actors Michal Isteník and Jiří Ressler also participated. The choice of play was also a good one. While many of the pieces created by V+W have rather the character of a revue, Heavy Barbora has a plot and an inner structure which makes it more of a classic drama.

How to replace the proscenium performances?

There are versions in which the scenes in front of the curtain are omitted or minimised for safety’s sake, with the wittiest of such scenes then being directly included in the play. Fortunately, dramaturge Šotkovský and director Slovák didn´t choose this path, instead opting for a more demanding and far more risky approach: to find actors that could manage to pull off the famous proscenium performances. Michal Isteník was selected (let´s say that he “represents” Jan Werich) along with Jiří Ressler (who is there “as” Voskovec, or Horníček). The speech marks are correctly placed here. Fortunately, the actors don´t come on stage as carbon copies of the V + W or H + W duo. Of course, they are similar to them in some respects (their poetic style of expression and plays on words) and different in others. They remind me a lot of that corpulent, earthy, laid-back guy, Slatinský, and the more intellectual and slimmer Lasica, from back in the1980s.

Phew, I breathed a sigh of relief when the first proscenium performances were over. Yes, that´s right. One cannot say that they simply imitate the famous duos - they are both excellent in their own right, even though one just feels compelled to make comparisons. After the performance, I watched several W + H proscenium performances on my PC again. Those I saw at Brno City Theatre really do bear comparison with them. Apart from Werich, many actors who are famous and renowned today appeared at the Osvobozené Divadlo (Liberated Theatre). Despite that, the current crop of actors as well as director Stanislav Slovák could easily compete with the famous teams from the past thanks to their courage and well thought-out approach. The jovial mayor played by Zdeněk Junák, Patrik Bořecký´s Governor and his classy wife Elisabeth, (Lucie Zedníčková): these were characters which were played excellently and with a great deal of expression. Of course, they were seconded by others: Ladislav Kolář as the lord of the manor, Vojtěch Blahuta´s excellent teacher, the distinctive cheese maker played by Jakub Uličník, and Rastislav Gajdoš´s stranger. Slovák has created a stylized affair that approaches Commedia dell´arte. He has already directed a similarly jolly musical fairy-tale, Snow White and Seven Dwarfs.  The audience reacted gratefully. A special mention should be paid to the girls and young men next to them - who knows what they are called? Simply “the crowd”. At the Divadlo Komedie theatre in 1960 this took the form of a group of characters milling around without significance. They didn´t have the facilities that Brno City Theatre has, where they are used to the rather different demands of putting on today’s musicals. In 1960, the producers were happy when at least people’s legs moved at approximately the same time. It is a good idea to view an old recording and then check out what “the crowd” in Brno can do.

In Brno, a daring project - to bring a famous work by Voskovec and Werich back to life – has proved a roaring success. Unfortunately, both of the authors are already in heaven, but maybe they are up there looking down on Brno and rubbing their hands with glee because the fun they created has already lasted 110 years.

Can the tempting prospect of V+W really be resisted? 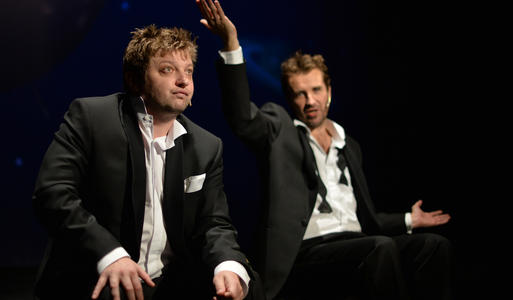 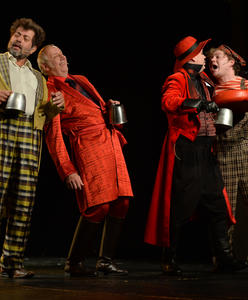 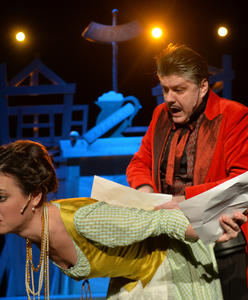 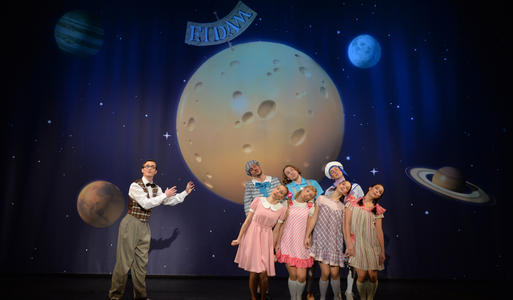 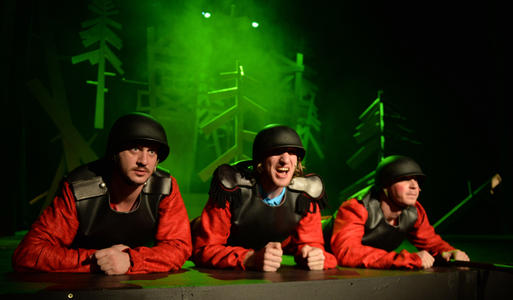 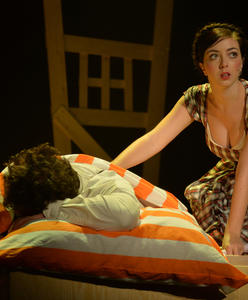 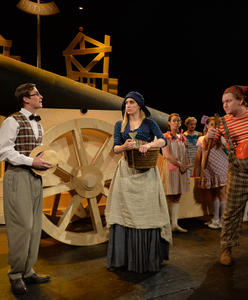 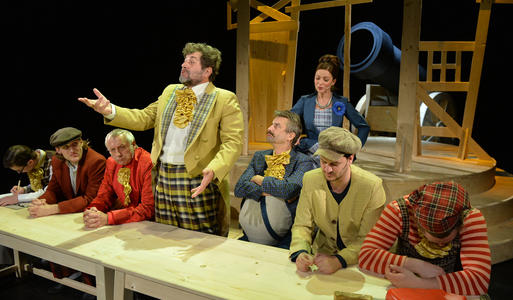 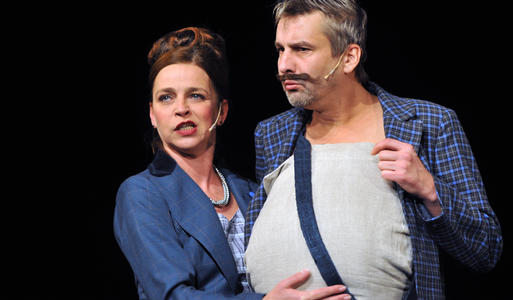 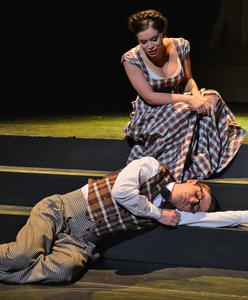 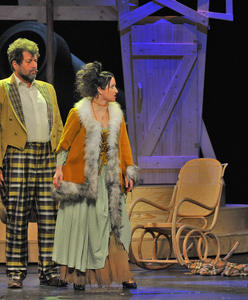 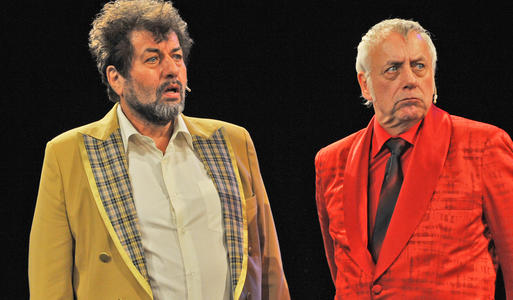