MENDEL OR THE MUTINY OF PEAS

In our productions performed at the unique location that is the Bishop´s Courtyard, we regularly focus on important personalities from Moravian history. With this production, the authorial team of Slovák–Šotkovský–Štěpán aims to complete what is some kind of a loose trilogy of authorial productions in various genres designed for the location. After Baron Trenck, an epic legend with songs, and Cyril and Methodius, a dramatic ballet, we now have the story of perhaps the most famous Brno citizen in the world – the founder of genetics, Gregor Johann Mendel, who was an abbot at the Augustinian monastery in Old Brno.  It isn´t a traditional  biographical drama, however, but rather a comedy play featuring original songs in which various Brno legends enter Mendel´s life story (we perceive Mendel as a central figure and symbol of Brno, and the authors link various Brno myths with his character). We finally learn here what the Old Brno peas themselves have to say about the abbot´s experiments. Stanislav Slovák will be the director of the performance, as in the case of Baron Trenck and Cyril and Methodius.

MENDEL, OR THE MUTINY OF PEAS

(…) can you imagine the summer stage showing ten years of arduous and crushingly dull experiments by the founder of genetics, who incidentally was also a monk and later the abbot of the Augustinian monastery, and thus steadfastly refused to have anything to do with the fairer sex?! The authors clearly had to do something, and so they elegantly humanised and lightened up the tale by setting it in a theatre environment where Mendel is exposed to the soubrette Denkerová’s wickedly seductive ways and all the action is managed by the impresario Zöllner as a great theatrical potpourri about science and the world. (…)

A LITTLE OPERETTA ABOUT MENDEL AND HIS PEAS

(…) the authorial quartet didn´t construct a traditional biographical drama; the ambition was instead to create a light singspiel about how it was with those peas and their cross breeding. Entertainment comes first here, and so that there is enough of it, everything is constructed in the form of a historical retrospective with much use of metatheatre. (…) The contrast between a secular artistic existence and the promised monastic life, the unrequited love of an actress for a scientist who is devoted to God, and also the crazy operetta performances called The Princess and the Pea and Love in the Prater: these are the main links and points of this comedy. The result is a moderately educational show with a very playful atmosphere (…) Theatregoers will enjoy the fun, as well as some melodramatic scenes, they will feel the touch of history while also meeting authorial fiction and exaggeration, just as it usually is with small operettas.

A GENETICIST UNDER THE SPIRES OF PETROV

(…)Janek (Lukáš Janota, as diffident as a little boy), a contemporary Doctoral student of natural sciences, is moved back in time with the help of theatre magic and due to the will of the Rococo–costumed Mephistopheles-esque manipulator and personifier of many characters, Anton Zöllner, a real impresario from the nearby Reduta (played by the great comedian Milan Němec). He becomes a tenaciously researching monk who is platonically in love with the coquettish soubrette Emma Denkerová (Andrea Březinová). (...)

(…)Both of the main actors coped with their roles excellently. Lukáš Janota presents Mendel as a man of science, an introvert dedicated to his research, his flowerbeds and his peas. The young scientist is endearingly and comically helpless, honouring his mission and the duties pertaining to it, and therefore – at least outwardly – remaining immune to various unmistakeable demonstrations of favour from the operetta soubrette Emma Denkerová. Andrea Březinová complements the main male duo in this role, and dominates mainly the operetta parts of the show with her singing performance. Milan Němec plays the worldly impresario Zöllner with bravura; he is a man of great words and extensive gestures with which he rules the space around him.  Thanks to this, he often makes the audience clap and laugh spontaneously, and it is well-deserved.(…)

MENDEL OR THE MUTINY OF PEAS: BRNO COMES ALIVE WITH MUSIC AND HUMOUR

(…) Of course, it wouldn’t be a proper operetta without dancing peas: with Martin Pacek´s choreography and Andrea Kučerová´s great costumes they got everyone dancing up on Jaroslav Milfajt’s stage set. And it wouldn´t be Brno City Theatre, it wouldn´t be the atmospheric Bishop´s Courtyard if the production didn’t feature a significant contribution from Petr Hloušek with his finely-crafted video projections. (...) Stano Slovák has already proved several times that he is witty and inventive, and that he’s good at selecting the best from the many ways of achieving a certain effect. He takes as his starting point the actors themselves, and their creativity, and builds from there while approaching every situation very seriously. Only in this way can he manage to “make things fun” yet keep them believable. The first impression gained is that everything seems light and natural, as if the actors were only playing around. It is good that spectators have such a relaxed feeling, but one must remember that this is the result of hard and well thought-out work. The long final applause was for everyone involved, and most of all for the authors and the director.

DARWIN MADE THE APE HUMAN, SLOVÁK DID THE SAME FOR MENDEL

(…) the central character of this piece about Mendel is not actually the scientist himself, a man who wasn´t understood in his time (Darwin didn´t even cut the pages of his copy of Experiments with Plant Hybrids), played very well by Lukáš Janota. The show is rather about Zöllner, and at least ten other impresario characters. The authors weren´t afraid of making references to other works. Mendel´s exam in front of a university board of Austrian professors is basically Schweik’s encounter with the committee of crazy psychiatrists. The result is also the same – he’s almost superarbitrated for stupidity. Scenes like when the ailing Mendel was visited by his family in Brno, and the scientist’s meeting with Slovak patriots, including Štúr, Hurban, Hodža and Ostrolúcká (the first Slovak feminist) in a pub in Vienna, make for a great show which today´s Slovak nationalists won´t survive.

MENDEL AND HIS REBELLIOUS PEAS

(…) Mendel himself is presented as a researcher who is so obsessed with his science that he has no time for anything, not even women. At the same time, however, he cannot present his knowledge well enough to gain recognition - on the contrary, he always fails – his teaching exams, when studying at the university in Vienna, even when presenting his research. It happens with his lecture thus: the actor playing the impresario of a theatre which is performing a play about Mendel doesn´t even want the lecture to be presented in the play, and so he offers the actor playing Mendel a sexy scene with the women from the theatre ensemble. Faithful to his character, the actor in the role of Mendel stubbornly refuses and the impresario is left afraid that the audience might leave during the lecture. So, in the end Mendel lectures while the semi-naked ensemble and the impresario all hop around him. One needs to see this - it just cannot be expressed in words. The scene when Mendel´s parents and grandparents came to visit was beautiful and the cancan-like dance by the rebellious peas was very funny, but perhaps the best moment was the meeting between Mendel and a group of Slovak national revivalists in a Viennese pub. The patriots were so drunk as to be almost paralytic, Ľudovít Štúr in particular, and Mendel could think of nothing better than to tell them about genetics, supporting his theory with evidence of the mutual mixing of nations in the Habsburg monarchy. (...) 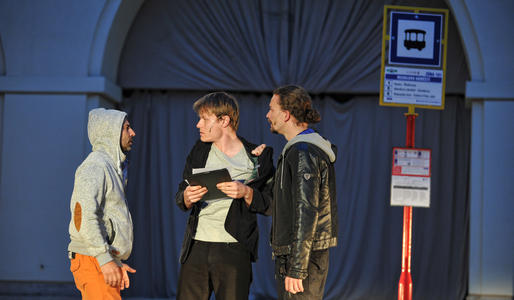 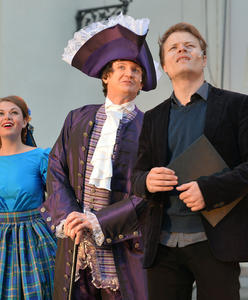 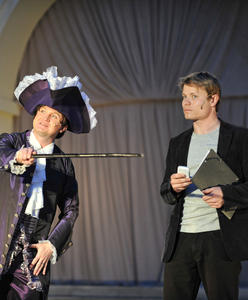 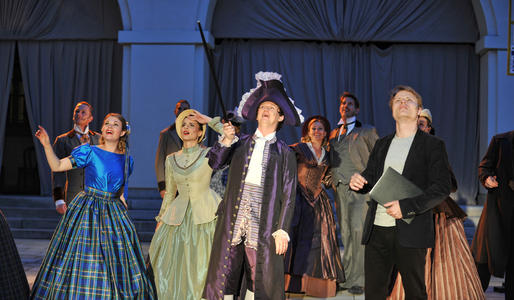 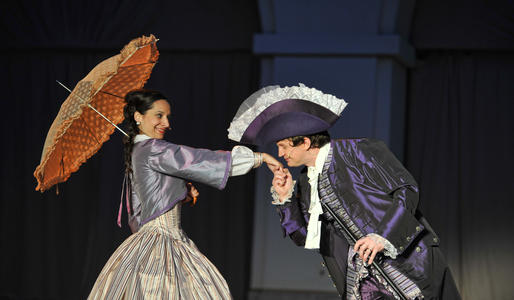 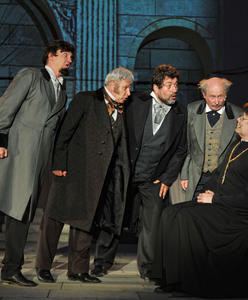 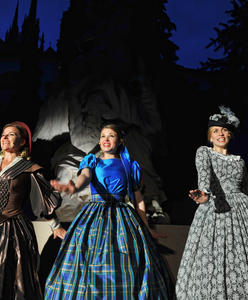 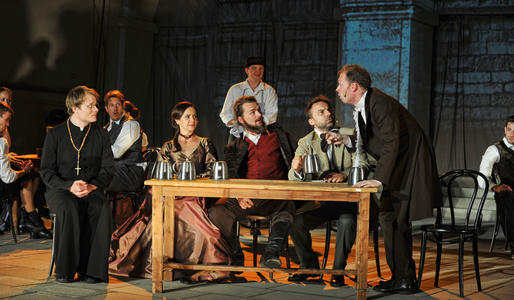 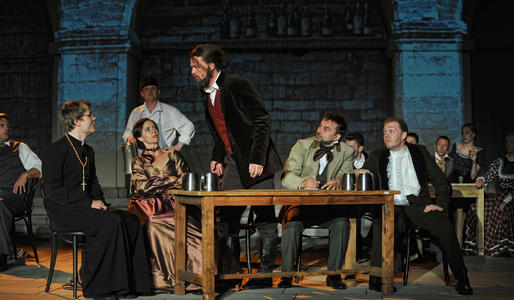 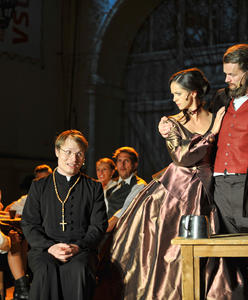 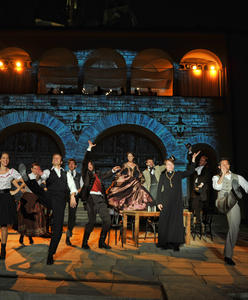 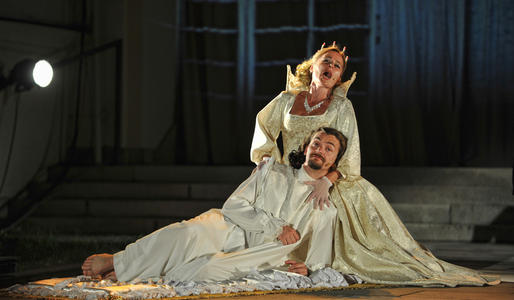