Sisters Lili and Bibi Kroll have already had enough of all the pre-Christmas and Christmas madness and crazy shopping and they’ve decided to boycott Christmas this year. Bibi would be happy to fly away to Dubai, while Lili has found out that according to the stars this is the best time to conceive a baby with her husband Leopold. However, Leopold isn´t very happy about that, what with his hangover after the Christmas party, and on top of that, Lili and Bibi´s parents burst into their household with a terrible message - Mum´s pet, the fat tomcat Gustav, has been kidnapped and the kidnappers are asking for an astronomical 10 000 Euros for his return. Moreover, the distinctive local menace, a mysterious gang called the “Red Comets”, which decides to take from the rich and give to the poor at Christmas time, is involved in the  kidnapping... You can find out whether the Krolls manage to have a “normal” Christmas despite all these troubles in this brilliant crazy comedy by renowned contemporary Austrian playwrights Andreas Sauter and Bernhard Studlar (awarded the prestigious Kleist Award for their play A. is someone else in 2000). Red Comets, one of the best contemporary German-language comedies, will be shown as a Czech premiere at Brno City Theatre.

THE RED COMETS ARE FLYING EVEN AFTER CHRISTMAS

(…) Are you exhausted and weary on Christmas Day? Are you so fed up with the whole Yuletide thing that you’re still suffering even now? Why not have a bit of fun with it, crazy fun, at Brno City Theatre’s Red Comets. I would like to point out in advance that it isn´t a musical but a drama, because it isn´t easy to laugh or indeed roar with mirth to a beat. But I can promise you that your post-Christmas mood will improve. This play by Andreas Sauter and Bernard Studlar has all the features of a good, witty conversational comedy and on top of that, situations and gags appear there like those from silent comedies. The three men and four women that play the main roles, not to mention several hopping Santa Clauses, have a great time up on stage. The beginning itself, when Jakub Uličník is trying to get out of his bed after a party, in his underpants, unbuttoned shirt and loose tie, to open the door for his father- and mother-in-law, is already a sign of what the whole play is going to be like right up to the end. (...) Jakub Uličník can make both the audience and his colleagues laugh so much that the play stops for a considerable time until the actors are capable of speaking again. But the audience doesn´t mind, it just makes them laugh even more. I would advise you to buy tickets for the front rows if possible, as if you sit at the back, there is a danger that you won´t be able to hear a single word due to the spectators laughing in front of you. (...) and I have to praise Viktor Skála, whose skills place his performance only just behind that of Uličník’s rascal, and Erika Kubálková who is very funny as a typical mother-in-law. But everybody, everyone without exception, is great. Otherwise it wouldn´t be possible, it wouldn´t work any other way. (...)

A COMEDY FULL OF “SANTA CLAUSES” AT BRNO CITY THEATRE

Theatre authors Andreas Sauter and Bernhard Studlar are popular in German-speaking countries right now, and no wonder, as humour is still a scarce commodity in our lives. The dramaturgy team at the Brno theatre chose well when they decided to produce this play with its strange name, Red Comets. (...) The whole situation/conversation comedy revolves around the rescue of a kidnapped tomcat. It is full of cleverly constructed happenings and witty dialogues, and features a fast-paced sequence of hilarious events. Director Stanislav Slovák really got the most out of every moment. He has already proved in several previous productions that he has a rare sense of timing and does funny scenes very well, and it can be seen that he really “enjoyed himself” with this comedy. The ideas of the creative team often enter the realms of absurdity, particularly when it comes to the psycho-physical acting of the characters, and the fundamentally humorous nature of the story just accentuates this. Sometimes, almost unbelievable jumps and falls occur in tense situations, while at other moments a slower tempo emerges where there’s just the repetition of jibes, creating some kind of pseudo-calming atmosphere which makes the spectators roar with laughter. (... ) Director Slovák always builds his productions on the acting abilities of the protagonists - as an actor himself, he knows exactly what can one get out of the actors via the creative process. This can be seen throughout the whole comedy. In fact, it is rare for a theatre show to be packed with so many ideas, little additions by the actors, dynamic movements and changes of pace and rhythm, and Red Comets definitely benefits from this. There really is nothing serious about this production, no higher aim or noble goal. It is just a little comedy about the theft of a tomcat which turns a quiet Christmas into a crazy sequence of events. But that’s what it’s all about. To entertain and keep entertaining, relentlessly! (...)

(…) The cast consists of a septet of actors, out of whom Erika Kubálková stands out the most in the role of the hysterical mother of sisters Lilli and Bibi Kroll, whose pet tomcat Gustav has been kidnapped. Kubálková puts everything into her performance and her hysterical Margaret Kroll is most entertaining. (...) Her husband Alfons, played by the experienced Viktor Skála, is similarly good. (...) Ivana Vaňková plays the role of Lilli, who longs for a baby. Vaňková is more “unrestrained” in the first half, while she finds a common language with Jakub Uličník, alias Leopold, in the second half: their sparkly duet fulfils its role in this madly crazy piece excellently. Andrea Zelová doesn´t disappoint either in the role of younger sister Bibi, who insists on leaving to pursue her dreams in Dubai. (...) Red Comets offers a wild and crazy comedy full of entertaining sketches and absurd situations. (...) Director Stano Slovák proves that humour can even be “extracted” from a consumer Christmas rampage. If you’re looking for humour that ranges from light to absurd you shouldn´t miss Red Comets. (...) 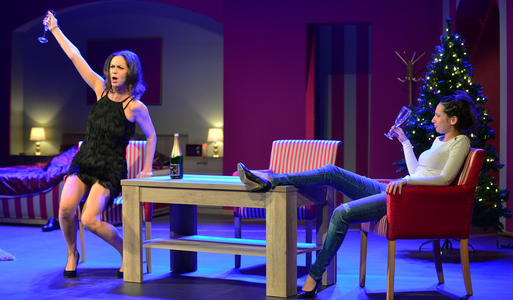 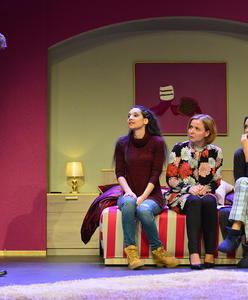 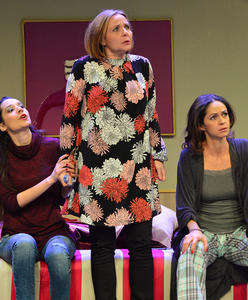 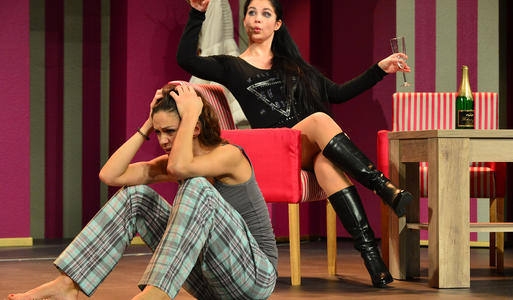 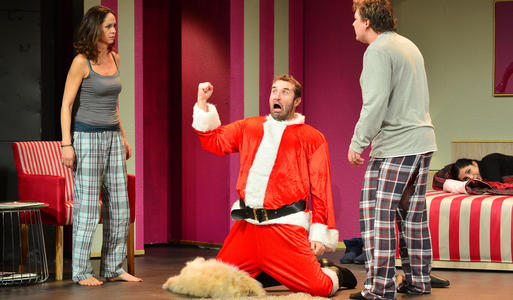 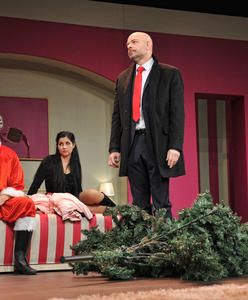 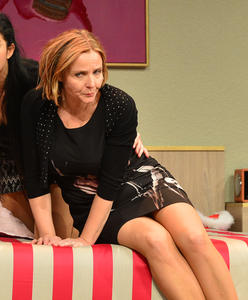 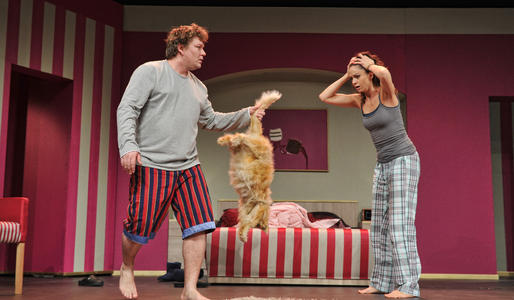 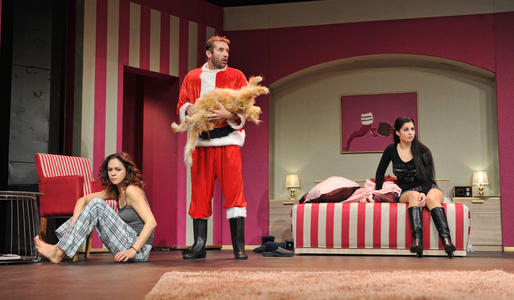 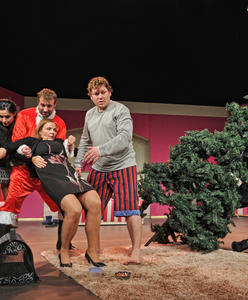 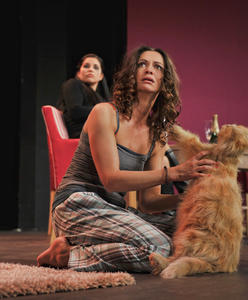