The state theatre in Darmstadt showed the world premiere of the musical Timm Thaler, directed by Stanislav Moša, on 17th November 2013. The show is based on the novel of the same name by James Krüss, which was also published in Czech under the name Ukradený smích (Stolen Laughter). Timm Thaler, a young boy well-known for his typical fragile,  refreshing, happy child´s laughter, finds his existence under threat and so enters into an unfortunate agreement with Baron Lefuet (the Devil), selling the baron his laughter in return for the opportunity to win every bet. Timm quickly becomes the richest man in the world, but he isn´t happy. He misses his laughter, and so decides to get it back... A journey follows that is full of adventures, traps, betrayal, pitfalls, friendly help and unwavering love, and ending with the final victory of brilliant intelligence. The story became exceptionally popular in Western Europe, which was also thanks to a TV series filmed by the ZDF TV company in 1979. Musical composer Xavier Naidoo is one of today’s most popular German musicians. The fact that Stanislav Moša was addressed to stage the world premiere of this work (as with the musical Pope Joan) together with his team – conductor Dan Kalousek and choreographer Aneta Majerová – demonstrates that his work is renowned all over Europe, and that the work of his colleagues is also held in high esteem. The production will be presented to our audience as a Czech premiere and also as the first performance after the world premiere.

(…) The central role is the character of Timm, played by Jan Brožek, whose convincing acting and cultivated singing showed for the first time that Brno City Theatre has gained a new ensemble member of high quality. Marie, Timm´s loyal friend, who fights alongside him to get his sold laughter back, was played by Eliška Skálová. She has already starred in several successful productions but she was given a great singing and acting opportunity here. She mastered the role with surety and beautiful enthusiasm, and certainly convinced the audience that her engagement by the theatre was worthwhile. The Baron is a scary fairy-tale character, an embodiment of the devil. He was played with enjoyment by Martin Havelka, who is definitely good at scaring people. Saskia, who metamorphosed into the devilish Lilith, was played by Viktória Matušovová. The fact that she has a lot of theatre experience for her age was easy to see from her acting, singing and movement up on stage. She seemed to be having a great time as the Baron’s energetic servant. Her friend Alexandr, who was played by Lukáš Janota, one of the pillars of the theatre, has an important role in the musical, and there is one more character that mustn´t be forgotten: the child’s role of Timm, in which Josef and Adam Gazdík –the director’s sons – alternate. Both children have already shown in the musical Whistle down the Wind that they’ve inherited the director’s talent. Adam also confirmed this in the performance I saw. The children are undistinguishable as far as both appearance and talent are concerned, so you will have to look at the posted cast list if you want to find out which of the blond boys is acting so flawlessly this time.  (...)

A modern riff on the Faustian theme – this could be a brief summary of the magical musical Sold Laughter. (...) The authors of the musical are very much involved in the world of soul and R&B, and Marcus Heitz is also no stranger to the genres of sci-fi and fantasy: these are areas that influence the artistic direction throughout the production. Moreover, the creators of the musical chose to exploit the topical issue of gambling and games instead of horse racing, directly centring the plot on that aspect of the entertainment industry. The set consists of a revolving stage which reminds one of a casino - it is dominated by a huge roulette wheel and several screens reminiscent of fruit machines that evoke the atmosphere of a gambling den – a world of glitter and risk, wins and losses. (...) The musical also offers fine acting and singing performances. Lucie Bergerová sang best, handling the “double role” of the baron´s dark helper Lilith and the bewitched Saskia skilfully. The amazing scene where the demon Lilith transforms into fragile Saskia is one of the highlights of the performance. Confident Lucie Bergerová managed to extract the maximum from her role. Jonáš Florián comes very close to her excellence as another character that undergoes change, Timm, a jolly and carefree young man who turns into a bitter grouch. It is a pleasure to see and hear him give a well-delivered, pleasant acting and singing performance. Lukáš Janota also sings marvellously in the role of worried Alexandr. We can also look forward to Martin Havelka’s devilish baron, and his evil laughter (…)

THE DEVIL FROM THE CASINO

(…) Musical authors love to draw from literary sources and the creators of Sold Laughter are no exception. The show is based on James Krüss’ children’s book which follows the life of Timm Thaler, a small boy who sells his laughter in exchange for being able to win every bet he makes. (…) Music is the foundation of every musical and in Sold Laughter the mix of pop, rock and rap is pretty decent. The closing song Je krásné vidět tě zase se smát (It’s beautiful to see you laugh again) is one of those that grab you with their catchy melody and don’t let go. (…) Christoph Weyers has designed an interesting set for the show. It is inspired by the well-known Merkur construction sets and symbolizes the childhood and imagination that Timm loses together with his laughter. In contrast, the casino is portrayed in a very realistic manner, with roulette and card tables surrounded by a multitude of television screens. You can bet there on anything you want, but the price is truly very high. (…) Jan Brožek sings and acts well in the role of Timm Thaler. (…) Barbora Remišová plays Timm’s friend Maria as a pleasant but somewhat hyperactive girl. The director doesn’t give her time to take a breather - she’s always running off somewhere and almost never stops. The demonic, manipulative Baron Tretsch was played by Martin Havelka, who has much experience in such wicked roles. (…) However, the most interesting acting and singing this time was of course from Viktória Matušovová in the role of Lilith. Her resonant voice could be clearly heard above all others. (…)

HOW LAUGHTER IS SOLD AT BRNO CITY THEATRE

(…)  Brno’s production team, led by director Petr Gazdík, has created a light and music show which whisks the audience away to the casino, as well as to hell itself. Practically everything – both the action and the music – oscillates between the human world and the realm of demons. Christoph Weyers´ scenery (in particular the enormous set pieces) looks as if it has been created from a playfully enlarged Merkur construction set. Several TV screens showing ongoing sports betting games and on-line poker matches lend the show a contemporary feeling as well as the stuffiness of the gambling room. The dominant scenographic feature is a large spinning roulette wheel at the back of the stage. Gazdík tries to offer a fast-moving show (with a production that’s only slightly over two hours long) mainly based on the dynamism of the orchestra (conductor Ema Mikešková) and actors, supported by lasers and field recordings of birds and rain. (...) The musical is carried well by Jan Božek, the actor playing the main hero (Timm), and Viktória Matušovová´s scenes as Lilith liven things up considerably. Božek doesn´t resort to some kind of simplistic infantilism in order to portray the adolescent Timm, and his clear and pleasant singing performance is enjoyable, as is the case with Lukáš Janota’s (Alexandr). Matušovová sang excellently, convincingly expressing the difference between the coarse voice of the demon and (later) the softer tones of a young, loving woman. (...) Sold Laughter bubbles along somewhere between a fairy tale, a ghost story, a fantasy and parable about the fact that – using the words of the final song – laughter suits all people and, on top of that, has great healing properties. (...)

SOLD LAUGHTER (TO THE DEVIL, OF COURSE

(…) The plot is colourful and complex, with more than a few humorous sections, and the songs are excellent. The musical style is rock, arranged for a live orchestra of twenty-eight musicians in such a way that its rocking power is not lost but rather enriched and developed. It is beautiful to listen to and makes one want to sing or hum. Three artists participated in creating the musical arrangement. The stage was produced by Christoph Weyers with the help of an enlarged Merkur building set, which was a good idea in itself, but it was with the costumes that he really excelled. He let his imagination fly free, and it eventually returned with outfits that make one’s jaw hit the floor. The director, Petr Gazdík, had an easy job with this environment and an ensemble that he could rely on. It never disappoints. What was exceptional, though, was Lucie Bergerová´s performance in the role of the she-devil Lilith, who slithers in front of her boss and wildly attacks everyone else. Her grimaces, voice, gestures, and physical motions were just excellent. (...) 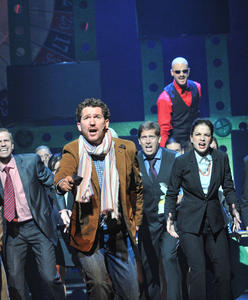 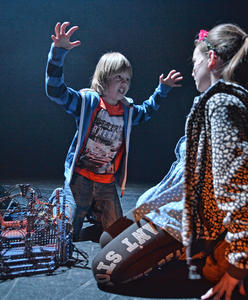 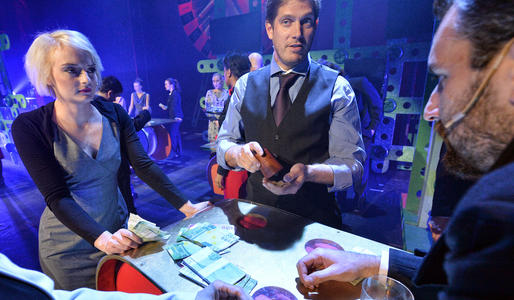 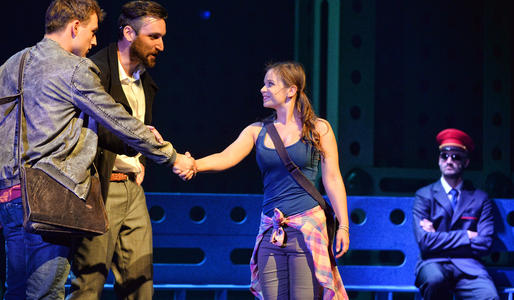 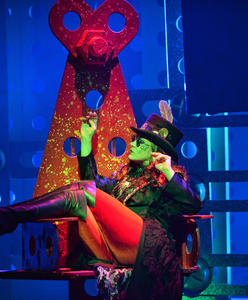 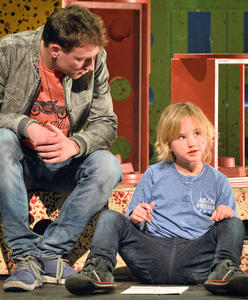 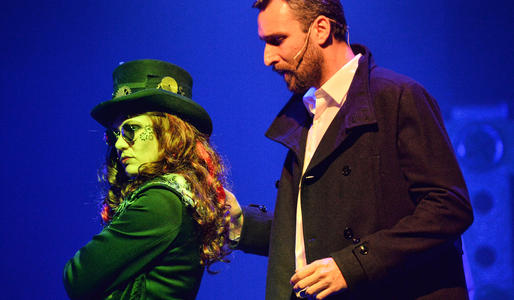 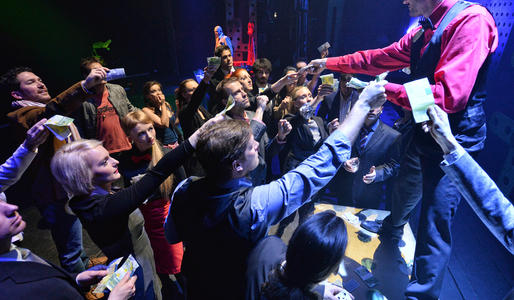 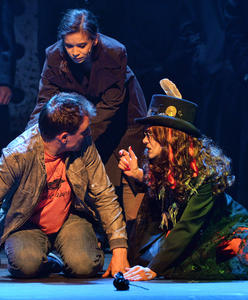 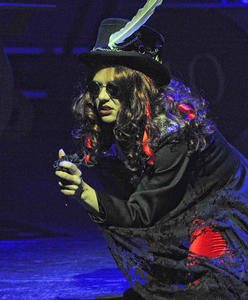 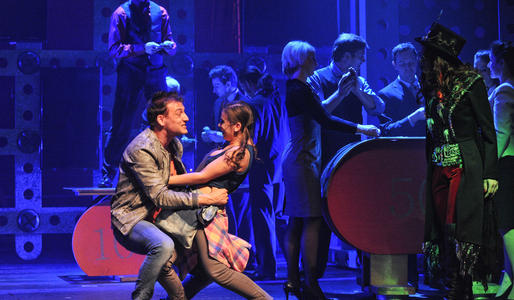