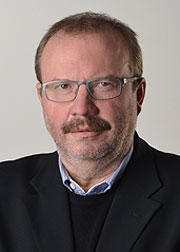 Stanislav Moša, the Director of Brno City Theatre, drama and musical director, lyricist and librettist, was born in Nový Jičín in 1965.

After completing his grammar school studies, he studied music and drama at the State Conservatoire in Ostrava, and afterwards drama direction at the Janáček Academy of Music and Performing Arts in Brno (JAMU). After graduating from university, he started out as a director at what was then the Mrštík Brothers Theatre. From 1984 to 1994, he also held a teaching position at JAMU in Brno, and he was the Artistic Director of JAMU’s Drama Studio, Marta, for three years. In 1990, he became the Artistic Director of the Mrštík Brothers Theatre, and two years later, the Director of Brno City Theatre.

Stanislav Moša as also an excellent author, though he mainly works as a librettist and lyricist in cooperation with Zdeněk Merta and Petr Ulrych. As far as drama is concerned, his own dramatization of a novel by Ivan Kříž The Truth about the Destruction of Sodom, was the most favourably received. He has already created many interesting projects in the field of musicals – his collaborations with Zdeněk Merta produced Midsummer Nights´ Dreams (1991), the theatrical oratorio Bastard (1993), the musical opera Babylon (1998), the musical World full of Angels (2000), the fairy-tale musical for children Garden of Miracles (2004), and two parts of the Divine Comedy musical trilogy – Inferno (2008) and Purgatory (2013). With Petr Ulrych, he wrote the musical ballad Radúz and Mahulena, the musical Koločava (2001), which is based on the motifs of the story of Nikola Šuhaj, and May (2001), based on Karel Hynek Mácha´s work. In 2007, this duo presented the musical work Markéta Lazarová (2007). With Miloš Štědroň, he wrote The Game of Love, Death and Eternity... (1998). He also worked together with Zdeněk Merta to prepare a megaproject, Bernstein´s Mass (1997 and 2001), which involved more than 300 participants and was performed at Prague Castle and Brno’s Rondo Arena (now the DRFG Arena). The State Opera in Prague staged an opera by Zdeněk Merta La Roulette, which Moša directed and for which he also wrote the libretto. In 2010, Moša presented the monumental oratorio Joan of Arc at the Stake by Arthur Honegger.

Stanislav Moša is also the person behind the idea to build and operate the Music Theatre, which was created as a second theatre building for Brno City Theatre. It commenced operation after its ceremonial opening on 2. 10. 2004, and has been an inseparable part of Brno theatre culture ever since.

Stanislav Moša also holds several important awards and prizes. In 1992, he received the Czech Music Fund Prize for the musical féerie Midsummer Nights´ Dreams. In 1996, he accepted the City of Brno Award for Brno City Theatre. In Maribor, Slovenia, he won the Prize for Aesthetic Breakthrough for his direction of the musical Cabaret. His direction of the musical Spring Awakening received the Divadelní noviny Award in 2010. His work and effort is appreciated every year in Brno’s TOP 100 survey, which features famous Brno personalities. One of his latest prizes is the prestigious award given by the Czech Chamber of Commerce and the Order of the Golden Laurel.  In May 2013, Stanislav Moša was presented with a prize by the theatre, literary and audiovisual agency DILIA, awarded for life-long successful artistic activity.

Beauty and the Beast