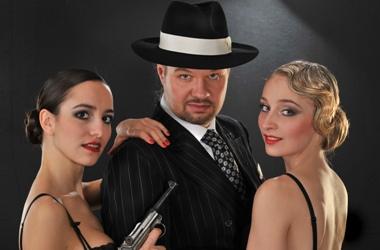 The musical Chicago has everything which is exceptional about Broadway productions – an almost fairytale story of fame, luck, beauty, riches and love, all connected by timeless hits and accompanied by breathtaking dance numbers.  It was only a question of time before this phenomenal work returned to our stage; its Czech premiere was actually right at the Mrštík Brothers Theatre (now Brno City Theatre) in 1978, so three years after its American premiere.
This satirical musical, which criticizes the corrupt crime and jazz – saturated society in 1920s Chicago and is based on the play by Maurine Dallas Watkins, was written by Bob Fosse and Fred Ebb and features music by John Kander. The main characters, beautiful fame–craving murderesses Velma Kelly and Roxie Hart meet in a women’s prison and, with the aid of famed lawyer Billy Flynn, use every (primarily feminine) weapon they have to fight for the front pages of the newspapers and the title ‘Murderess of the Week.’
Sparkling tension, humorous hyperbole and a chilling atmosphere in a musical full of jazz!

A fantastic murder show in Brno

Lenka Šaldová 3. May 2011 zdroj Divadelní noviny No.9
A fantastic murder show in Brno
The media dictate to us what and who we should notice. Those who aren’t written or spoken about appear not to exist. What is reality and what is only a pseudoreality constructed by the media? And what are we willing to do for our moment of glory? Stanislav Moša is right: it is easy for a crook to become a celebrity and for a nobody to become a star!
The musical Chicago, which after being an initial flop obtained tens of musical and later also film awards, isn’t however full of moralizing focused on the topic of the power of the media but is mainly an impressive music and dance show, and for this kind of show there is no better address than Brno City Theatre. Stanislav Moša staged Chicago with an understanding of hyperbole, in an imaginatively lit area which represents both a cabaret and a prison. The MC, Vojtěch Blahuta, has a discussion with the spectators in the front rows and then sits down at the piano and plays jazz together with the band. The ladies are dressed only in black net stockings, suspenders and chemises, thus revealing their sexy bodies and legs. Their performance has style, whether it be the six murderesses singing a murder tango or the two main rivals Velma Kelly (Ivana Vaňková) and Roxie Hart (Ivana Skálová) mixing it up together. The cynical and charming lawyer, Billy Flynn (Dušan Vitázek), enjoys his position as a manipulator on whom the fate of the girls depends. The performance of Milan Němec as the “clown”, Amos Hart, singing a sad song about the hardship of a constantly neglected person, is touching. The extravagant “operetta” journalist Mary Sunshine (Martina Severová) rules the stage completely for a short time. However, the best comes at the end: Mama Morton (Markéta Sedláčková) sings her song in a truly breathtaking fashion. A wholly professional, passionate and entertaining production. Brno City Theatre is simply great at this.

Chicago in Brno: Grade A

Luboš Mareček 2. April 2011 zdroj Magazín Víkend DNES,
Chicago in Brno: Grade A
The musical Chicago has an interesting historical connection with Brno. It had its Czechoslovak premiere only three years later than the world premiere, appearing on the stage of the Mrštík Brothers´ Theatre, today’s Brno City Theatre, in 1978, which is one year before it reached London or Prague.
The banal attribute ‘timeless’, which is often used for works which are well established and shown with stiff persistence, is in the right place here. Some works don’t age. Even if you retain the attributes of 1920’s gangland America, the spectators will also see the present there. This satirical story of corruption, false morals and the manipulation of public opinion could have been written yesterday. Perhaps murderesses who kill their own husbands and then cry crocodile tears are no longer freed, but dishonest behaviour (the musical doesn’t have a single uncorrupt character) is ever present. Add the unceasing human desire for fame, happiness, beauty and riches at any cost… It is unsurprising that this story of two beautiful murderesses was based on a real event.
The fight to be murderess of the week
The arrested beauties Velma Kelly and Roxie Hart long to become famous in this story with a great libretto and phenomenal music. Both of them use the expensive services of a famous lawyer, Billy Flynn, who is a cynical leech and manipulator. As far as both sinners are concerned, they aren’t particularly bothered about freedom and a pardon; the duo are mainly fighting for a spot on the front pages of the newspapers and the title “murderess of the week”, and try to get the most out of their position.
Director Moša intentionally turns this corruption-soaked musical into an even bigger circus, with the suspender-clad actresses hamming it up most of the time. A good example is the excellent scene where Roxie is trying to persuade her husband to find a lot of money for the lawyer. The comical physical exertions employed by Radka Coufalová make the audience laugh and simultaneously reinforce the monstrous cunningness of such behaviour.
Poignancy and sarcasm escalate to a high point of bitterness
The director tries to keep the course of events within the genre borders between hyperbole and laughter, during which the unscrupulous behaviour sometimes sends chills down one’s spine. Chicago needs a quality ensemble and orchestra to be perfect, and Brno City Theatre has both at its disposal. Seventeen musicians play in prison cells which are scattered around three floors of a huge structure which represents a prison and its cells. Only the piano is standing on the stage. The top board of this piano, which the MC plays, functions as a bed for adultery at one moment, and at other times plays host to Roxie’s seductive stretching. Chicago doesn’t do much speaking; it is full of songs.
Vojtěch Blahuta as the versatile MC was an experience, and the two leading ladies were also good: Ivana Vaňková (Velma) and Radka Coufalová (Roxie). The first-mentioned, with her rich tone colour and well mastered dance, easily fills the emptied stage. Coufalová is, on the other hand, a little beast well able to play with mimics and gestures; her voice and movement skills never fail her, and she does a good job of ironizing her own character. Flynn, played by Petr Gazdík, is sometimes a jolly humanist and at other times the complete opposite. Milan Němec as the downtrodden husband Amos doesn’t gain popularity from the spectators via acting blackmail but rather as an ineffectual fool who is neither a match for his wife nor the blood-thirsty environment.
The poignancy and sarcasm which the director presents via light caricature escalates to a high point of great bitterness at the end. The two beauties thank the audience for their trust in their innocence, sending thanks to God and roses to the auditorium. You will get to experience, bitterly, how a lie can look seductive in a beautiful shiny dress or how it can hide in a cloak of beautifully peppery jazz.

Brno’s Chicago – a musical about our treacherous world

David Kroča 15. March 2011 zdroj Czech radio 3 –Vltava radio station
Chicago: a review by Czech radio 3 –Vltava radio station
After Les Misérables, Evita and Mary Poppins, Brno City Theatre has presented another international-class musical. Chicago had its premiere on Broadway in 1975 and was performed in Brno only three years later by what was then the Mrštík Brothers´ Theatre, now Brno City Theatre. This musical has returned to the same stage in Brno thanks to a team lead by the theatre head and director, Stanislav Moša.
I have to admit that I like the effort of director Stanislav Moša to present Chicago as a parable about the influence of the media. The overrating of media messages as well as the creation of so called celebrities are topical issues which we don’t see at the theatre very often, unfortunately. In the musical they take the form of the true story of two murderesses who weren’t convicted even though they had provably committed the crimes, due to the help of an experienced advocate and a media campaign.
The protagonists Roxie Hart and Velma Kelly meet in a women’s prison in Chicago in the 1920s, a time when the city was ruled by corruption, violence and organized crime. Brno’s production follows in the tradition of the original Broadway production, and thus the environment of the women’s prison mingles with the image of a circus arena or cabaret. Each episode is, in fact, also a revue number which has its own gradation and ‘punchline’.
The inventive three-floor stage by Jaroslav Milfajt depicts a stylized prison with separate cells in which not only the charming actresses reside but also the individual members of the seventeen-member live orchestra. The stage is dominated by a grand piano lined with coloured bulbs at which the MC – a distinctive character combining clown and commentator, acted by Vojtěch Blahuta and Karel Škarka in alternation - plays his preludes. However, the success of this jazz opera depends on the performance of both main female roles. In the role of Roxie, Radka Coufalová alternates with Ivana Skálová, while Velma is played by Svetlana Slováková and Ivana Vaňková in alternation. In my opinion, Svetlana Slováková is a real discovery and not only for the future of Brno’s musical – she dances and sings flawlessly and moreover - like her colleague - also adds lightness and virtuosity to energetic Velma’s dance numbers.
The director tries to create a chilling atmosphere in which an important role is played by a tangible erotic charge. Charming actresses perform in skimpy costumes by Andrea Kučerová which often consist only of suspenders and black underwear - even a cramped prison cell or the top of the grand piano offer room for flirting. Violence, adultery and treachery are simply features which are “dear to the hearts” of the heroes of the story, as the MC says.
I like the choreographic elements in the style of Bob Fosse’s school, in which sensuality is refined and where every detail of a stylized move is important. In this respect, particularly the trial scene is fine-tuned to perfection - the lawyer played by Dušan Vitázek or Petr Gazdík, literally takes delight in his own legal dodges, which he accompanies with a refined tap dance number. It is as if he wanted to say with every step and lunge: ‘See, it is so easy to deceive people!’ For this message and more it is worth seeing Brno’s version of this famous musical. 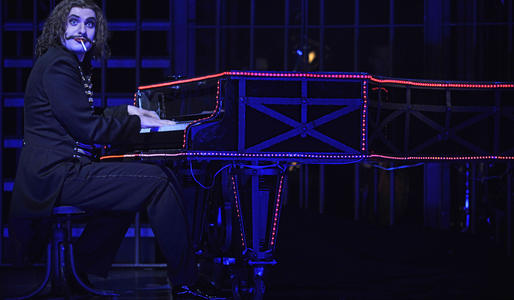 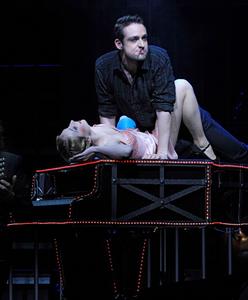 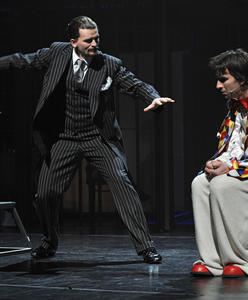 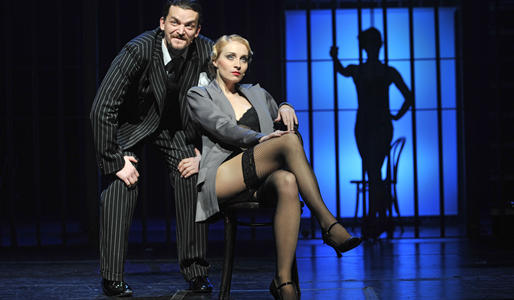 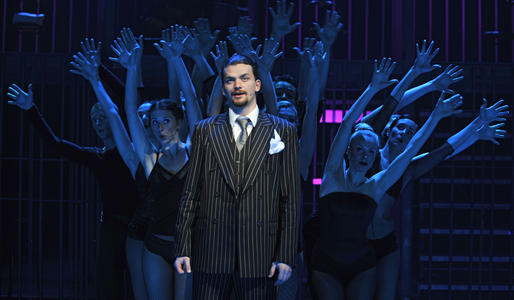 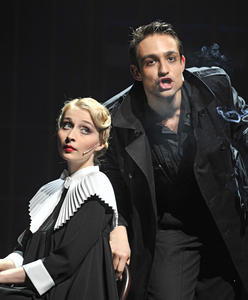 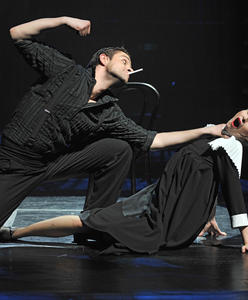 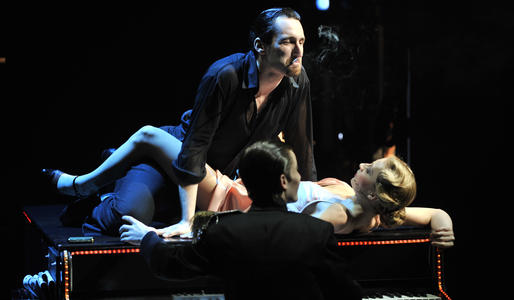 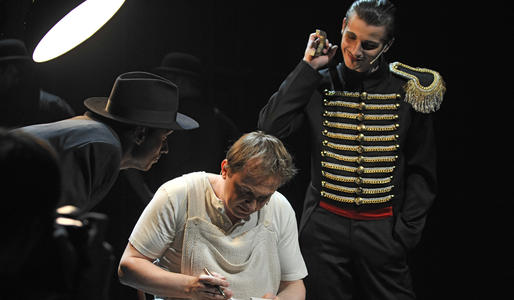 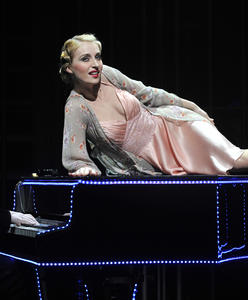 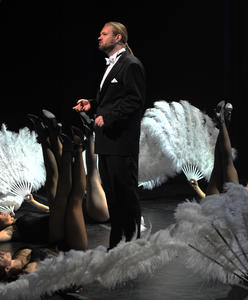 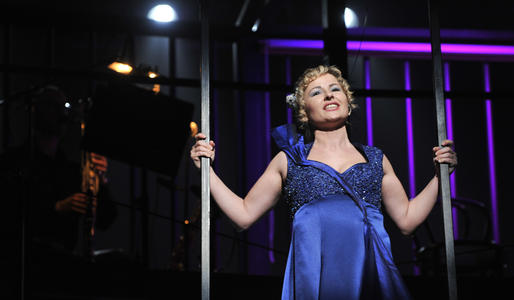