The second work in a freely linked trilogy by the music composer Zdenek Merta and the librettist and director Stanislav Moša, comprising Inferno, Purgatory and Paradise, takes us to a convent which becomes the refuge of three friends, the members of a well-known rock band. They are hiding there from the mafia, disguised as nuns. In these new circumstances, the distinctive musicians, whose lives are very, very far from being ordinary and moral, have to fully conform to the rules of the order which took them under their roof as their own, and forget all the joys of the world, even if they are exposed to all possible kinds of temptation.

Every minute of their stay in this environment is pure purgatory for them! Here, however, the convent isn’t just a place of service and self-denial; it is also a place where music has been cultivated for centuries. Of course, music which is miles away from that practiced by the three rockers. The confrontation of two completely different attitudes to life as well as music brings, apart from extreme tension, outer and inner conflicts and dramatic, though here mainly comic, misunderstandings, also inspiration and an initiation to the possibilities for enriching and improving one’s deep-rooted and often also unclearly motivated everyday routine - both in life and in music.

PURGATORY AS A ROCK SHOW IN A MONASTERY

Kateřina Šebelová 3. February 2013 zdroj www.velkaepocha.sk
Brno City Theatre prepared the second part of the Divine Comedy musical trilogy with the subtitle Purgatory as a January premiere. The connection between the production and Dante´s novel is only thematic in nature. The authors of the production, the duo Moša-Merta, have changed almost everything in comparison with the previous Hell, from the genre and characters to the language and setting.
Rockers in a monastery...
A group of three friends – Deny, Jerry and Bas, who play together in a rock band, live a highly exuberant lifestyle. Their out-of-control behaviour leads to them ending up in a strange monastery with rather weird rules where very strict order is maintained. The young men are abducted to the monastery by three charming girls who will try, together with other members of the monastery, including the strict Mother Superior, to help the “naughty rockers” to find an alleged higher purpose by saying no to their joys and adhering to a strict regime.
Sins are presented to the young men both in the form of physical denial and suffering and via looking at the lives of those who succumbed to their pathological desires such as gluttony, sensuality or the desire for possessions, beauty and fame (Hitler, Stalin, Countess Báthory and the Maharaja of Dhar). However, it is a question whether the attempt to make these Bohemian men “better” and pure will be successful or if it everything will turn out completely different in the end…
Jaroslav Milfajt has proved once again that he is a master of his craft. His inventive and fully practical set provides the conditions both for a live rock concert and for the gloominess within monastery walls. On top of that, the huge functional organ and the large chessboard with thirty actors in motion squeezed onto it both offer a great spectacle.
Costume designer Andrea Kučerová also did a good job. As far as the music aspect is concerned, rock lovers will be pleased – they will have the opportunity to enjoy a live concert performed by the four main characters, including the quiet drummer Divous, alias the stage manager, Jaroslav Záděra, in an untraditional role.
Apart from the great singing by the cast, which comes as standard here at Brno City Theatre, a good performance is also provided by the choir singers under the leadership of Karel Škarka, and most of all by the thirty-member orchestra conducted by Dan Kalousek, which creates a tasteful musical background.
Charismatic rockers and demanding choreography
As far as the actor’s art is concerned, there is nothing at all to complain about – Slovák, Mach and Vitázek enjoy their roles, both on the podium as well as during other scenes in the monastery, and the pleasure of acting really radiates from them. Svetlana Janotová as Angela, Ivana Vaňková as Countess Báthory (who changes costumes with extraordinary skill) and Pavla Vitázková in the triple role of Eva, Krasotinka and Hurt´s wife are most interesting in the female roles. There is also an unforgettable duet featuring the silent Divous, Jaroslav Záděra, and Terka, Mária Lalková, which sees them drumming on a table. The chess game between Joe Stalin and Dolfy Hitler, where thirty actors change positions via some difficult choreography, is definitely one of the best scenes.
Brno City Theatre’s version of Purgatory offers a great show full of good music, fancy scenes and choreography with a colourful musical and singing accompaniment.

BRNO’S NEW MUSICAL: PURGATORY WAS WORTH WAITING FOR! 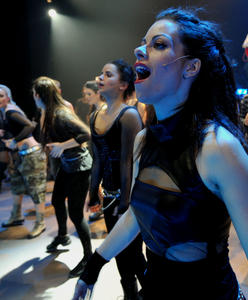 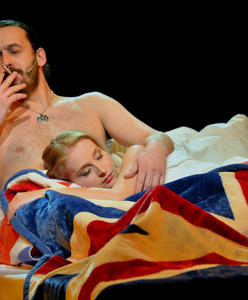 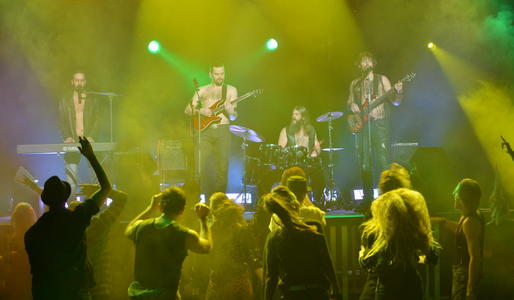 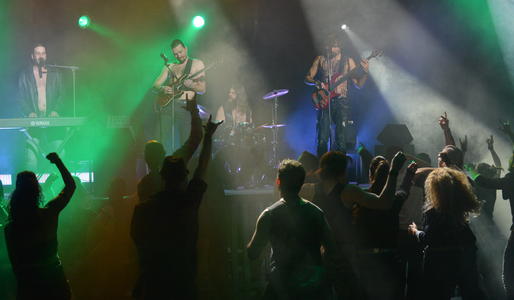 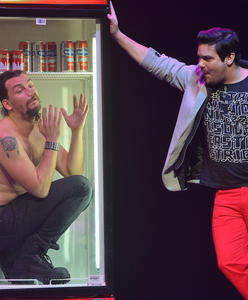 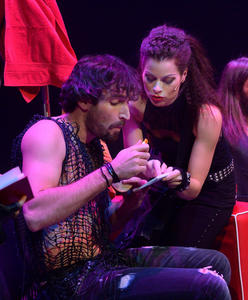 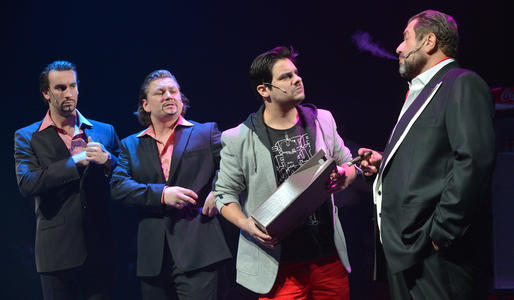 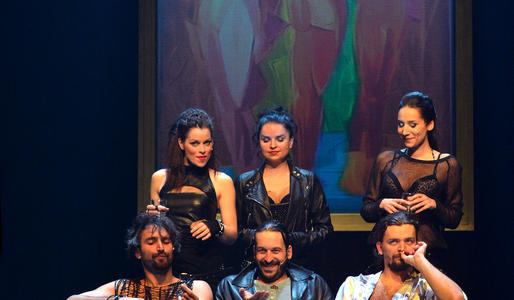 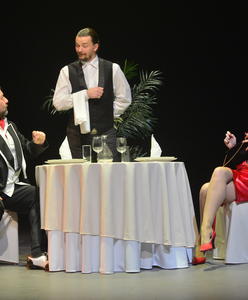 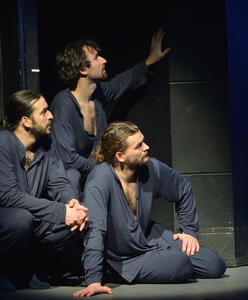 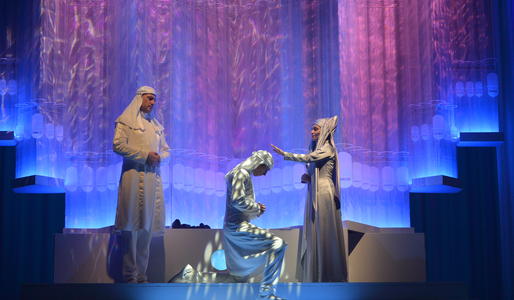