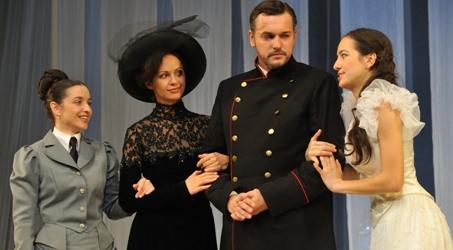 a tragicomic dispute between the reality of life and dreams

High drama from one of the most important world class authors for the theatre. In the story of the Prozorov sisters, Olga, Irina, Masha and their brother Andrei, Chekhov convincingly captures the period of the end of the 19th century with all its contradictions. The sisters long to move to Moscow, where they spent their childhood, but their lives change so much that the siblings lose the opportunity to make their plans come true. Brother Andrei marries the townswoman Natasha and Olga gradually resigns herself to a life bereft of prospects. The love between Irina and Baron Tuzenbach ends tragically, and Masha's family life is unhappy as well. These dulled "beautiful souls" diminish themselves through their feelings of guilt that they cannot live in a useful way. In their nostalgia and tormented helplessness, Chekhov artfully managed to depict not only a whole stage in the development of Russian society but also a whole stage in the development of mankind. Therefore, his play maintains its vitality even today. The simple plot culminates in the tension of the approaching disaster, framed by the inner conflicts of the psychologically elaborate characters, a clash of real and fabled values. Lyricism plays an important role. The individual details, statements as well as the general atmosphere of the plot have a stunning symbolic character and they add an exceptional generalizing and timeless nature to one of the best written plays of world theatre literature.

Naděžda Parmová 3. June 2009 zdroj Boskovické noviny
If you get in the right mood for experiencing the nostalgia of the "Russian soul" of the Chekhov period, visit Brno City Theatre.
We, the Czechs, know that the number of three sisters was specified to Anton Pavlovich by Jára Cimrman and that it is a tragicomedy of people who are in search of the meaning of life. When Chekhov wrote The Three Sisters for the director Stanislavski in 1900, he claimed that it was a comedy.
Stanislavski made the play into an "oppressive drama from Russian life" and it has stayed like this ever since. Chekhov was angry because of that and he wrote, among other things: "I wanted something completely different. I simply wanted to tell the people - Look at yourselves, look at what a poor and boring life you lead. Understand what a stupid and boring life you are living."
The play can be viewed from many angles. I see it as an ever-topical play, as a drama about the collapse of dreams - in this respect, Andrei Prozorov's life is the most touching. It's about the problems of people who cannot live fully at the present time and escape to their memories and to the future. We can see this all around ourselves even today. All the characters have clear outlines and all of the fourteen actors perform excellently. We believe their desires and dreams and we are also able to cry when everything is tumbling down. There hasn't been such a beautiful stage at the drama theatre (by Emil Konečný) and such inspiring costumes for a long time. It is director Stanislav Moša's first production of Chekhov. When he was asked at a press conference why it has taken him so long, he said that he'd had to mature for this. Mr. Moša, you have matured excellently, thank you!

About poses, habits in life, emptiness in the soul

J. P. Kříž 3. June 2009 zdroj Právo
Brno City Theatre performs Chekhov's Three Sisters in a faithful, yet thrilling interpretation by director Moša
Czech directors usually treat Chekhov inventively and bravely in order to avoid that boringness which was assigned to the master of world drama by Stanislavski. The most recent proof: Three Sisters by the director Stanislav Moša and dramaturgist Jiří Záviš at Brno City Theatre.
However, their approach to Anton Pavlovich Chekhov is unprecedentedly humble, almost reverent, featuring minimal omissions of text and the inclusion of all prescribed situations. The inventiveness of Moša's production lies in something else: in acting the scenes using non-verbal communication, in the exact description of relationships, and in making them up-to-date with regards to our perception of love, dreams, boredom and convention.
Acting without words
Masha isn't bothered about her love for Vershinin. These two enjoy that momentary love affair which marks unsuccessful marriages in our time rather than Chekhov's…
The futile desires, social rigidity, hopelessness and resignation to their lot in life of the majority of the characters are expressed with humour and lightness, and they are precisely accentuated in the afore-mentioned exactly-replicated situations. For example, the actors accept Vershinin's thinker's gesture accompanied by "let's philosophize a bit" by sitting down in armchairs and sofas in an automatized way: It will be boring.
It doesn't hold the story back, as average dramaturgists might think, but it makes it lighter. And at the same time, it expresses the spiritual emptiness masterfully, including the apathetic and never-materialized wish to work, to get out of being entrapped in stereotype, and a blind belief in Russia's future. Unlike Chekhov, we know where and which way 20th century Russia was heading.
Emil Konečný's white stage, decorated with tulle curtains, the contrast between the white and dark costumes by Andrea Kučerová, the inconspicuous and yet clearly comparative background music by Zdenek Merta: all of these things form another qualitative dimension to Moša's Three Sisters.
And those acting performances! What else when you have only prize winners and Thalia candidates on the stage? Markéta Sedláčková in the role of the internally unbalanced Olga, the excellent Ivana Vaňková as Masha, who is suffering emotionally in her marriage, and Svetlana Slováková as Irina, who is the youngest but is experiencing a lot of difficult situations in life. And Lenka Janíková's Natalia, who not only clucks but is furious!
There is Vershinin (Petr Štěpán) - an empty vessel, the resigned army doctor Chebutykin (Jan Mazák), Michal Isteník's Prozorov, who staggers through his life without will, the helpless professor-like figure of Kulygin in an original interpretation by Milan Němec, a stiff but very dangerous Solyony by Jaroslav Matějka…
The previous, very good, production of Three Sisters was by Sergej Fedotov at Brno's HaDivadlo. Moša's Sisters is no less interesting - in fact, it is probably even more so than the production of the miracle from Perm in the Urals, but in a different way.

David Kroča 31. May 2009 zdroj Český rozhlas 3 - Vltava
At Brno City Theatre, the production of Chekhov's The Three Sisters is different from the traditional canon regarding how the play is interpreted. While the textbook interpretations claim that, with Chekhov, the core of the message needs to be sought in the inner world of the characters rather than in the dramatic action, Stanislav Moša's production bets on directness. The play is "as clear as a mountain river," says the director himself in the programme, adding: "Nothing is hidden in it! One only needs to know how to read!"
Dramaturgist Jiří Záviš, who collected a series of essential texts on Chekhovian dramaturgy for the programme, dared to utter an even more honest statement: "The opinions in the articles above do not express the intentions of the producers." His words can also be read thusly: ''Yes. We know that this work of Chekhov's is quite complicated but we will create it in our own way.''
The production team focused on the comedic aspect of the famous play. They emphasize its timelessness in the way it reveals the comicity, smallness and pride of each of us. The house of the Prozorov siblings then becomes a fun house of figures which mock various kinds of people: for example, the brother of the three sisters, Andrei, is a traditional henpecked man, Vershinin comes across as a dreamer and talker, while Kulygin represents the absent-minded type of professor with no social skills. The tragic dimension of the characters then remains mainly in how they are still ludicrous even after all those long days which have elapsed since the play was written.
Director Stanislav Moša needs to be praised for not making almost any reductions in the well thought-out score. His production lasts more than three hours, but it isn't boring thanks to the unexpectedly fast tempo. The grey lengthiness of the village life of the Prozorovs, which is of course appropriate to the play, is felt perhaps only at the beginning of the first act when Masha, Olga and Irina are lazing around in the hall of their house. Scenographer Emil Konečný has created it in the form of a sugar candy-like hall in which the main artistic element is white gauze that covers all the furniture and appears in the form of curtains around the stage. The atmosphere of higher class society is reinforced by the costumes in which Andrea Kučerová reflects mainly the characteristics of the individual protagonists.
As was already mentioned, the actors present their characters as types, which isn't a problem for them. The down-trodden Andrei, acted by Michal Isteník, Petr Štěpán's talkative Vershinin and also Milan Němec's Kulygin are figures which easily entertain the spectators. The character which is the closest to Chekhov's conflict between dreams and reality is the youngest sister, Irina, acted by Svetlana Slováková. This talented actress has managed to imprint into her character a desire for a better life which is symbolized for her by a return to Moscow, and at the same time has moulded Irina from a mixture of inner restlessness, child-like naivety as well as permanent disillusion. Ivana Vaňková and Vendula Ježková alternate in the role of Masha. I saw Masha acted by Ježková, who accentuated mainly the desire of a married woman for an attractive lover. The oldest of the sisters, Olga, was more interesting in the way she was acted by Markéta Sedláčková: she longs for affection as well but she always manages to hide it behind the mask of a reserved professor of a girl's grammar school. 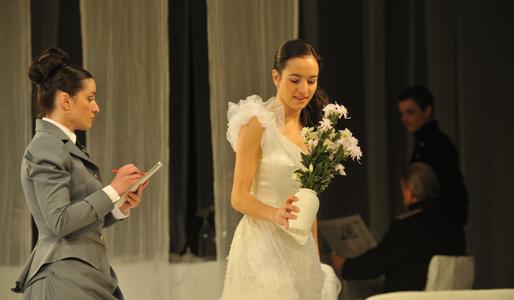 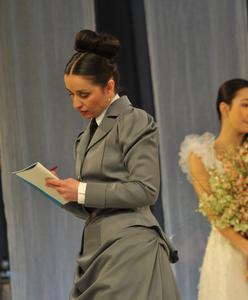 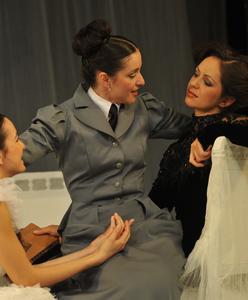 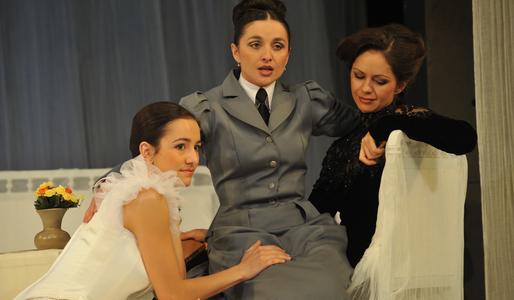 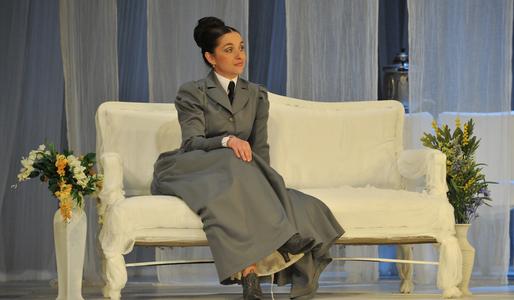 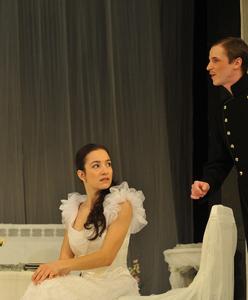 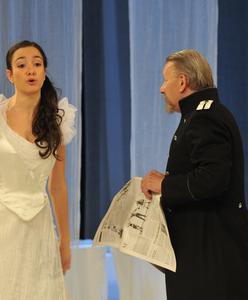 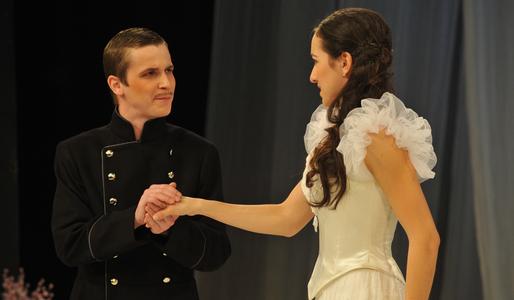 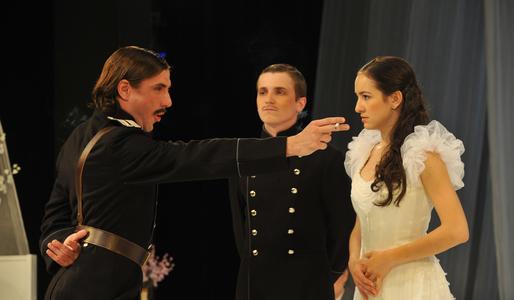 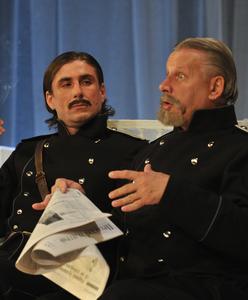 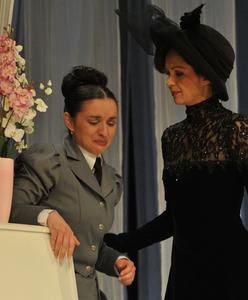 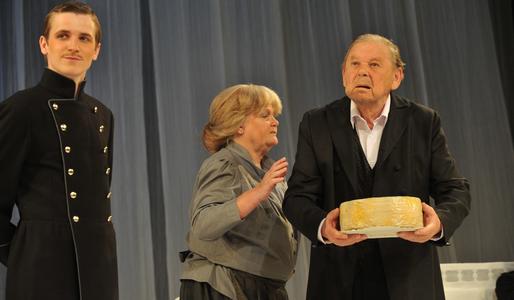