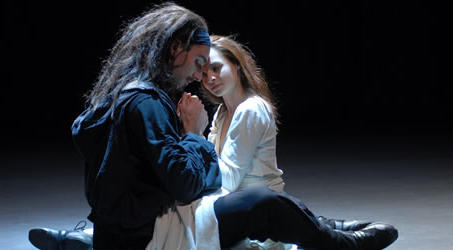 Vladislav Vančura’s prosaic work is noted for its magic ability of treating our mother tongue and for its extraordinary deep humanism in the intellectual sphere. The novel used as a model for the new music dramatization was written in the year 1931 and is distinguished with an extraordinary reality, richness and sincerity – its figures, although sinful, have a deep consciousness of moral code. The impressive suggestive story of young Markéta and wild Mikoláš, taking place in a rough milieu of medieval cruelty, religious and interpersonal disputes, became a model for František Vláčil’s brilliant film taken in the year 1967 with Magda Vašáryová in the title role. The principal theme of the work consisting in the message that “love is a medicine to violence and a key to the secret of the world” is close to Petr Ulrych and Stanislav Moša. The same theme was used in their preceding dramatic performances written directly for the Brno City Theatre - Radúz and Mahulena, May and Koloczava. The natural human desire for a happy life despite of a hard destiny, the beauty of the Czech language and the unusual but outstanding value of Petr Ulrych’s music promise an extraordinary dramatic experience.

A new look at Markéta Lazarová

Brno City Theatre performed the premiere of their new musical ballad ‘Markéta Lazarová’ on their Music Scene stage in the second half of May. The production is based on the literary work by Vladislav Vančura, created under the directorial baton of Stanislav Moša and with music by Petr Ulrych.

The general conception of ‘Markéta’ gives emphasis to Ulrych’s music, which, unusually for his work, is not totally lyrical throughout the performance. The spirit of the author can be seen within; however, in places it is aggressive, even predatory. The libretto originates from Vančura’s novel, with some parts replicated in full. There is no lack of dynamism in the performance, it has great tempo and thanks to the easily-changeable scenery there are almost no gaps to break the rhythm.

Jaroslav Milfajt’s scenery, made up of strips of mica hanging in a semi-circle around the stage, has a very austere appearance, but is all the more special for it, and perfectly complements the atmosphere of this musical. The strips are multifunctional – they can depict at one moment trees in a forest, at another a prison, or a cave. They also serve as a screen for Dalibor Černák’s projected scenery, which brings refreshing variety and adds greatly to the total impression made.

Andrea Kučerová’s costumes seem slightly idealised considering the medieval setting. All of the actors are dressed more or less identically, and the only character which stands out is Markéta herself, in her white dress.

The choreography is atypical, but suits the general conception of the performance and story very well. Vladimír Kloubek has created untraditionally distinctive and passionate choreographic numbers. ‘Markéta Lazarová’ is the type of performance which does not leave much space for actors to express themselves, placing emphasis rather on displays of singing and dancing talent. The most notable roles are those of Markéta, played by Radka Coufalová-Vidlák (alternating with Marta Prokopová) and Kozlík, played by either Martin Havelka or Jan Apolenář. However, this is also because they are visually different from the others. In any case, Moša and Ulrych’s ‘Markéta’ is one of those original and impressive productions which are imbued with passion, hatred and delicate love. This new look at a classic theme in the form of a musical ballad is definitely worth seeing.

Several weeks before the premiere of ‘Markéta Lazarová’, Prague’s GoJa Music Hall hosted one of the previous fruits of the cooperation of the Ulrych – Moša duo, ‘Koločava’, which draws from Olbracht’s novel ‘Nikola Šuhaj the Outlaw’. This work, partly thanks to GoJa’s successful participation, immediately found a place in my heart due to the fact that in our musical scene it is so special and different. And so I started looking forward to their interpretation of Markéta even more. Actually, ‘Koločava’ has much in common with ‘Markéta’. Firstly, there is the style of storytelling, which develops as if in a series of individual portraits. Furthermore, in both works there is surprisingly little space dedicated to the story of the lovers (in ‘Markéta Lazarová’ it is Markéta and Mikoláš) with attention given rather to higher ideals, for example to questions of faith or conflicts between groups.

The whole production is arranged around Petr Ulrych’s congenial music. This is beautifully visible immediately at the beginning, when Proutkař (Water Diviner) appears on the scene, and thanks to the magic of scenery projection, conjures up a little stream right before the eyes of the audience. Petr Ulrych previously suggested that this time he would like to try something different from usual, but at the same time keep to his plan of using songs from the concept album ‘Příběh’ (Story). He of course kept his promise, and the mosaic of styles is truly rich and varied. It certainly helps that this time Petr Ulrych has not only his own group, Javory, but also a complete orchestra at his disposition (directed during the dress rehearsal by Igor Rusinko), which greatly complemented the musical side of the production.

The first half was dominated by more aggressive, harder electronic rhythms inspired by the hip-hop style, which are of course beautifully theatrical, colourful, and without obscene words, so for example ‘Kozlíkova tlupa’ (Kozlík’s Gang) will certainly become a very popular hit. Even those who prefer rock will also find something for them. ‘Kdo je zbojník’ (Who’s a Bandit) seems to evoke the atmosphere of one of those very well done rock operas. The second half is more in the typical ‘Javory style’ (‘Hlavu výš’ (Hold your head high), ‘Malý koník’ (Little Horse)).

The Brno City Theatre ensemble is, of course, once again exceptional and works together as one ‘gang’. Maybe too much, but this is no criticism, just that sometimes I could not identify actors which I can normally pick out in other productions. The individuals not appearing as part of a group are hard to overlook, however. For example, Radka Coufalová-Vidlák in the main role, whose voice filled the hall with unusual intensity and clarity.

It’s the same with the player of the robber noble Kozlík, Jan Apolenář; the role is surprisingly more what you would expect to see in a typical drama than in a musical, but whenever he gets the chance to sing it is a truly amazing experience. The same is true for Igor Ondříček as Proutkař.

Purely ‘drama’ roles are Lazar (Milan Němec) and the district commissioner Pivo (Jan Mazák). The role of Pivo seemed a little static to me; I had hoped he would be given more room. We mustn’t forget the performers of Mikoláš (Jiří Mach), Alexandra (Hana Holišová) and Kristián (Vojtěch Blahuta); the certainty and ease with which they filled their roles surprised me.

It is certainly pleasing that a CD with the most significant songs has been available for purchase at the performance since the premiere. It is very good, and the first brief impressions from it will appear here soon.

All that is left now is to wish ‘Markéta’ a long and successful run on stage at the Music Scene of Brno City Theatre, and many enthusiastic audiences.

The holidays have arrived, and the theatres are orphaned of their audiences, though at Brno City Theatre, the subject of these paragraphs, the actors have no worries about ‘unemployment’ at this time, as there are many tour performances ahead. Today I would like to mention the final premiere of the last, 62nd season. It met with differing reactions, which is a sign that it engaged viewers, and did not leave them cold and non-committal. In the creation of this latest production Stanislav Moša was inspired by Vladislav Vančura’s novel ‘Markéta Lazarová’, preparing a libretto of the same name which was then shaped into a musical ballad by Petr Ulrych. At the first premiere I got the chance to find out the first impressions of members of the audience – they were very positive about the interpretation, and felt the performance had been a success. Stanislav Moša himself (he also directed) had been captivated from the beginning by Vančura’s use of language in this work, as well as the message it conveyed. Composer Petr Ulrych reacted very sensitively to Moša’s text. Of course, the duo weren’t working together for the first time.

The ovation that came at the end of the premiere belonged to all actors, but it is naturally worth mentioning those that impressed the most. It was Martin Havelka in the role of Kozlík, the robber noble, Viktor Skála as Lazar, the noble, and of course Radka Coufalová – Vidlák in the title role, and then two storytellers – Hana Ulrychová (still in possession of that great voice), and Petr Ulrych, who also conducted the live music during the performance.

‘Markéta Lazarová’ will return to the Music Scene stage for the coming season, and surely will rank among those productions which are forever “sold out”. 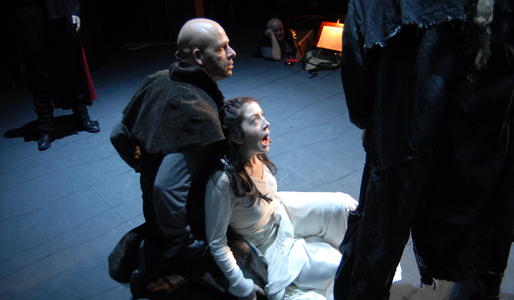 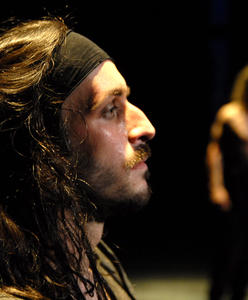 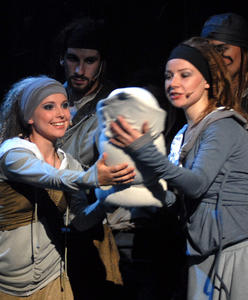 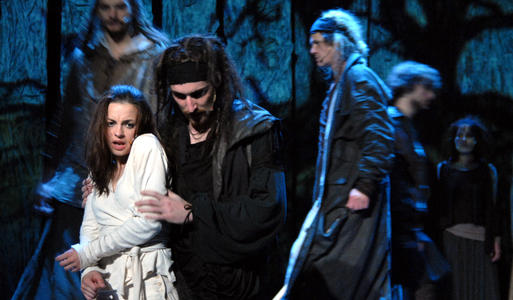 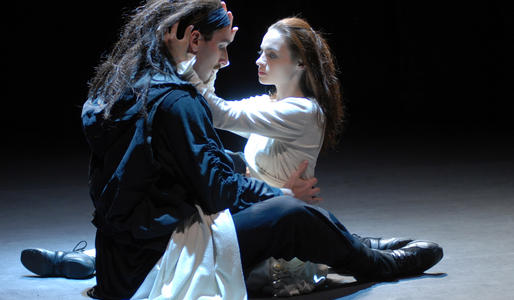 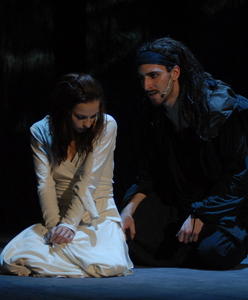 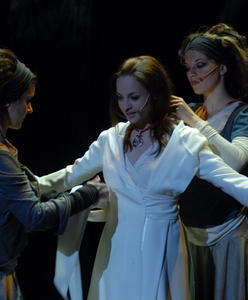 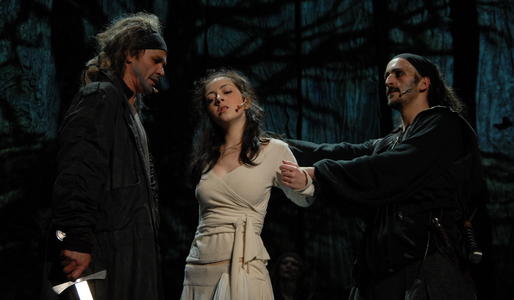 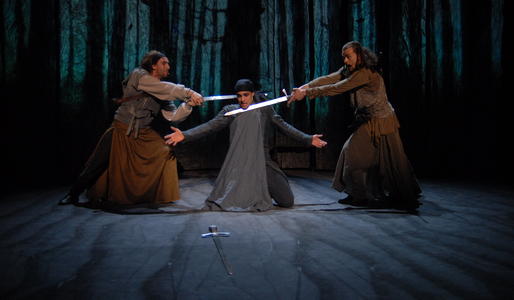 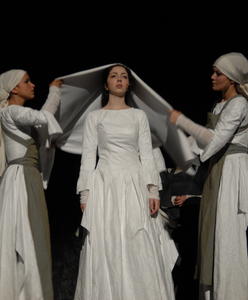 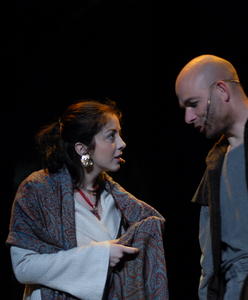 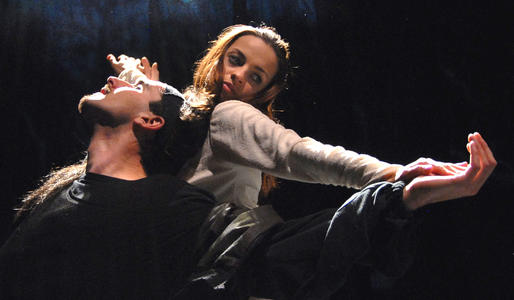