Sugar - Nekateri so za vroče / Sugar – Some Like It Hot 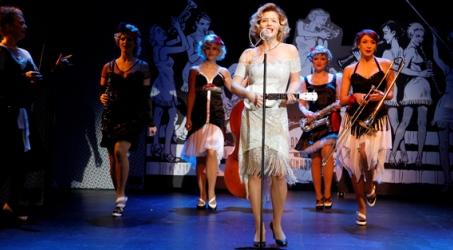 This musical was based on the legendary film Some Like it Hot with Marilyn Monroe. It sounds unbelievable, but this film was first shown fifty years ago, in the year 1959. The musical which bears the same name has gained exceptional success worldwide, and in December last year it also came the stage of a Ljubljana theatre, brought there by the director Stanislav Moša.
Two poor musicians quite by chance find themselves involved in a mafia gang war. They are pursued and have no other option but to find somewhere safe to hide. They dress up in women’s clothing and get employed in a band which leaves for a tour to Miami Beach. Florida offers a unique opportunity for the deprived musicians to escape from the eyes of the mafia… However, their crazy adventures are far from over! Thanks to their disguise, they experience a great number of comical situations and as if this wasn’t enough, both our heroes fall in love with a charming singer and ukulele player called Sugar. And as if this wouldn’t be enough, an elderly millionaire asks one of our charming musicians in drag for his hand in marriage…