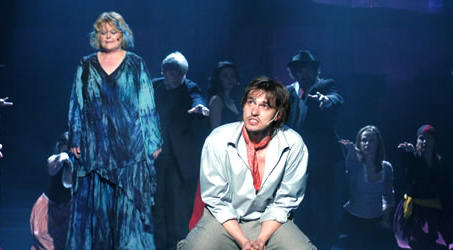 Without any doubt, May, the Czech “poem of all poems”, is the most famous work of the Czech Romanticism, being at the same time the most important work by Karel Hynek Mácha, who published the poem in 1836. The important Czech critic F. X. Šalda, who had called Mácha “a dreamer and rioter”, characterised him after having read his May as follows: “Mácha is a musical genius…” Šalda also pointed to the fact that May is not just a chant of love and that it is so popular due to the urgency of problems connected to the human existence. Thanks to this, the most important work by Mácha is still appealing not just as a heritage of the past but also as an eternally exciting and mysterious challenge inspiring new interpretations. The successful team of authors, Petr Ulrych and Stanislav Moša, who have already achieved great success with the musicals Radúz and Mahulena and Koločava in the Brno City Theatre, have accepted this challenge.

It was a late evening, it was the first of May...

One of the most demanding productions of the Brno Municipal Theatre – poetic musical fresco May, written by motifs of Karel Hynek Mácha and using his verses, had its premiere symbolically on the first May evening. Besides the imaginative and appropriate scene created by Emil Konečný, the presentation offers the audience a lake full of water across the whole width of the stage and falling rain, not as an spectacular idea, but as a compact part of the stage design. And besides the heart-felt direction based on the spoken word and presented within the perfect scenic variability, the balanced performances of actors, raising the strength of utterance of the new performance, were appreciated during the first night. Licence within the limits of new values

The authors - screenwriter Stanislav Moša and musician Petr Ulrych – called the plot of Mácha’s May, the most popular work of the Czech Romanticism written in 1836, untraditionally – or maybe provocatively to somebody – a detective story. Both authors who celebrated great success with the original and imaginative musicals Radúz and Mahulena and Koloczava (about Nikola Suhaj) on the stage of the Brno Municipal Theatre tried to reveal the substance of Jarmila’s seduction. The historians investigating Mácha’s literary heritage may curse the split of action into the expressional stage ambiguousness. But let’s admit simultaneously that “May” is so well-known that a certain creative licence cannot harm the tradition of the famous composition in respect of the new and original artistic ambitions of the scenic appearance (in comparison to other musical interpretations of pieces of literature which are flattering externally and hypocritical).

Hynek in a “schizophrenic” appearance

Hynek’s role was divided by the screenwriter Moša between the acting Poet (Zdeněk Junák or Viktor Skála) and the singing Bard (Petr Ulrych). This scenic “schizophrenia” provides the possibility of philosophical disclosure of the theme and more effective artistic specification of the development of action. The character of Jarmila (Markéta Sedláčková, Ivana Vaňková or Eva Ventrubová) was interpreted in an original way by the authors – as a wild gipsy. The Lady of the Lake, producing unrepeatable impressive scenes with her expressive voice, is acted by the leading representative of Czech folk singing Hana Ulrychová who managed to reach a deep introspection of realization comparable in its inwardness with the performances of Hana Hegerová or Jarmila Šuláková. The well-known music band Javory plays live in the performance. More than a half of music accompaniment is live, the rest is played from records.

The librettist Stanislav Moša took charge of direction in the functional cooperation with the costume designer Andrea Kučerová whose influence on the total impression is not negligible. A significant part of the performance is formed by Vladimír Kloubek’s choreography satisfying perfectly Moša’s effort to contrast the lyric and the epic of action, mainly in the parts containing gipsy elements. Under his hand, individual protagonists and the chorus changed into intuitively feeling subjects who – set up into a whole – created not only an attractive spectacle but also a sequence of suggestive pictures.

Moša’s concept lays lentamente individual audiovisual elements, often in a calculational sensual intersection. The course of action assures the audience in some scenes of the perfect resonance of imaginative sequence of director’s intents not only with the substance of Mácha’s theme but also with its Brno stage transcription.

The part of Vilém, which is one of the principal parts, is alternated by Stano Slovák and Petr Štěpán, Father was studied in parallel by Jan Apolenář, Ladislav Kolář and Igor Ondříček. But neither Apolenář nor Slovák, or other protagonists did appear as expressional central characters at the first night (1st May) – this position was occupied by experienced Markéta Sedláčková with her almost animally passionate, fervidly represented gipsy Jarmila. She expressed an unrepeatable convincing being there. Her motion and speech attracted the audience with its creative force, almost evil sense of introspective permeation of the action and the sensual level. Moša’s creative search

The performance distinguished by its balanced literature and realization and dynamic symmetry resembles Tyl’s epic in the first half. On the contrary, the second part which is more philosophical approaches Mácha’s (or better, Byron’s) expressional extreme blackness. Moša uses many expressional elements – from the classical radio voice sonority of individuals, through the onomatopoeic impressiveness (dripping of water in the cell), up to the “chased” chorus voicebands. In the extreme peak of the second scene with the suggestive choir of Mácha’s phantoms, there appear expressive “lines of force” of realization resembling the creative work of such personalities as Otomar Krejča, Vladimír Morávek, J. A. Pitinský or Alfred Radok. Moša with the ensemble of the Brno Municipal Theatre moved up the next grade of the imaginary inspirational and creative spiral without abusing spectacular shallowness (for example, illumination is sober but imaginatively functional). The convincing force of the screenplay of this stage novelty à la Mácha, of the interpretation and the performance itself is so pregnant that any verbal analysis of this compact formation would be just to its detriment.

Today of all days, the Brno Municipal Theatre presented symbolically a premiere of the poetic musical fresco “May” written by motifs of Karel Hynek Mácha and using his verses. One of the most demanding productions of this ensemble offered the audience a real lake full of water and the rain falling on the stage. Moreover, Jarmila is interpreted in an original way – as a wild gipsy.

The authors, screenwriter Stanislav Moša and musician Petr Ulrych, called the plot of “May” a detective story. They try to find out what is behind Jarmila’s seduction. Hynek’s part was divided by Moša between the acting Poet and singing Bard. The Bard is played by Ulrych. The Lady of the Lake is acted by his sister Hana Ulrychová. Their band Javory also plays in this performance.

Of the prepared music fresco May

Petr Ulrych – music composer; the Javory music group leader During the weekend, the Městské divadlo will present a music fresco inspired by Mácha´s famous poem May. This is a common project of the director and scriptwriter Stanislav Moša and myself. May is my largest scenic composition I have created so far. Mácha´s work is inseparably linked to romanticism, so we did not try to suppress anything romantic. The spectators will again hear the live band playing, and similarly as in the Koločava musical, in May my sister Hanka will sing live on the stage. She will present the part of the Lady of the Lake. Her voice will probably cover the most emotional parts. Of course, the spectators will hear the dulcimer; the oboe is another musical instrument I chose. The work is a combination of live music and playback. However, I use different ethnic percussion instruments not only in the recorded version. Javory will play mostly gipsy songs, as in our version Jarmila, Vilém´s lover, will be a gipsy girl. I dared to use tunes almost on the verge of pop or folk music, as my intention was to get to the musical genres of today. I personally found the principal message of May in the course of time. However fast moments may pass away, there is always something which survives. Just as Mácha says: And the bright suns of other worlds will appear again, and new stars, stellar depth will be born again.

“May” in the Review of the Czech Radio

The dramatic form of this brilliant work of renascent poetry and the entire Czech poetry presented on the stage of the Brno Municipal Theatre prepared lot of surprises to the audience. Everybody for whom reading of Mácha’s “May” meant moments of intimate quietening and lyrical meditation will be astonished. Since the first scene dominated by a group of dancing gipsies, the audience is convinced by the director Stanislav Moša to see a magnificent spectacle. A lake full of real water is spread in the foreground of the stage, real flames of a big fire blaze surrounded by gipsies. Water and fire – the two elements symbolize not only accented opposites between men and women but also the inconstancy of human life.

Moša took over the principal motifs of action and well-known lyrical passages from Mácha’s model, but extended the original plot with new meanings. He enriched the play with the current race problem because Vilém’s girlfriend Jarmila is a gipsy and the audience can see a visual patricide when the leader of bandits and “horrible lord of the woods” kills a seducer of his lover. After the criminal is executed with all showiness, the performance ends with a several-minute grand finale when Mácha’s patriotic verses sound in mighty waves of choir singing.

The most successful parts of the ambitious presentation include the scenes dominated by allusions and stage symbols. For example, the voiceband singing which accompanies the criminal’s meditation about eternity is very impressive. The regular sound of water dripping on the water surface is mixed with the rhythmic recitation and evokes the symbol of continuously flowing time. The night ball scene succeeded too. Perfectly masked chorus dancers which represent dancing ghosts create a dark after-death atmosphere with slight exaggeration.

The choreography by Vladimír Kloubek (guest) tries to use to the maximum extent the extraordinary scenic element - the large lake on the stage. However, some dancing creations look stereotypical and rather traditional, e.g. swan scenes. As for the dramatic performances, the Brno ensemble is convincing. The audience’s attention is focused on the part of young gipsy Jarmila alternated by three actresses: Markéta Sedláčková, Eva Ventrubová and Ivana Vaňková. I had a chance to see Ivana Vaňková who used her charm while dancing in the water but also proved her singing abilities at the beginning of the second act. While writing the nice songs, the author of music Petr Ulrych did not forget his sister Hana Ulrychová acting the Lady of the Lake, who freezes the audience several times with her suggestive expression and respectable voice range. The band Javory which accompanies live the whole performance took care of the very good impression of its musical part.

The poetic fresco by the motifs of Mácha’s “May” bets on exceptional scenic effects and sweeping pathetic gestures. However, there is no doubt that right this concept of the classical literature will attract crowds of curious theatre-goers to the auditorium of the Brno Municipal Theatre. Should you want to belong to them, you will have to wait some time as the repeats of May are sold out until the end of this theatre season. 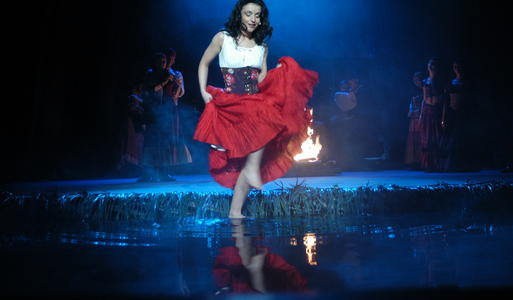 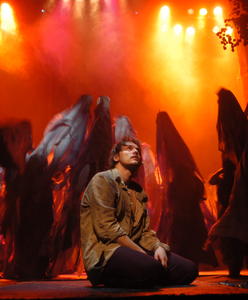 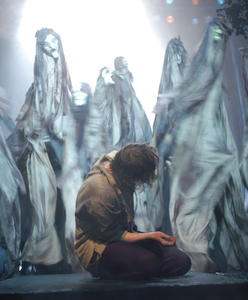 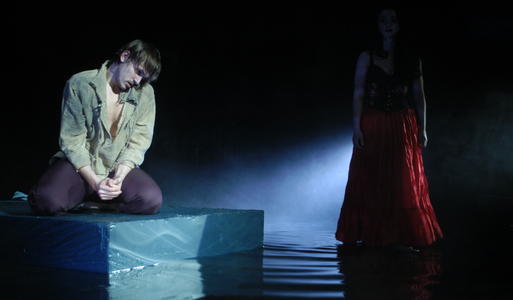 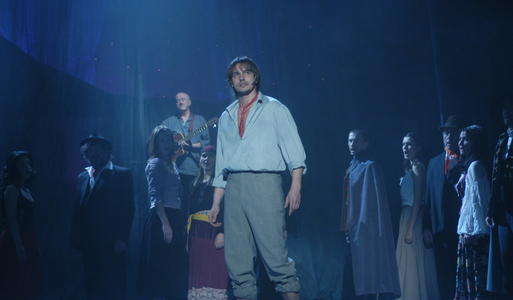 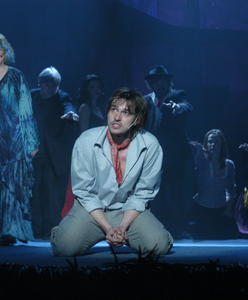 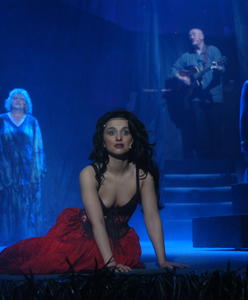 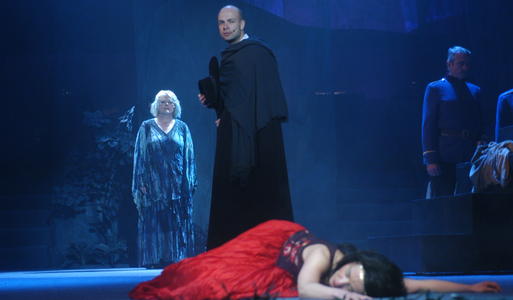 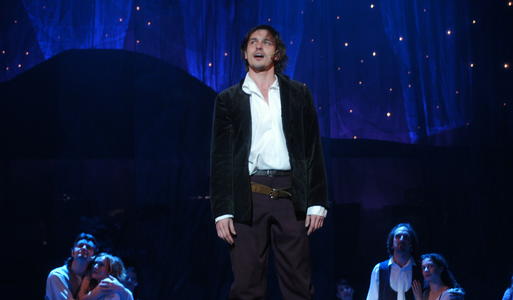 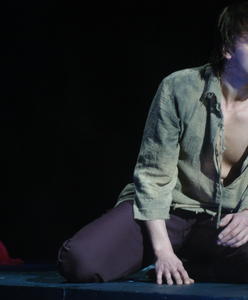 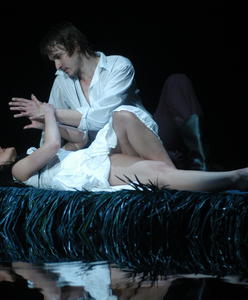 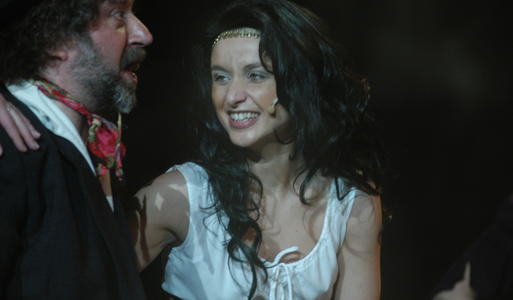