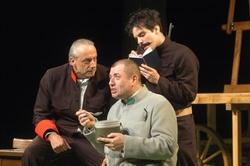 Stanislav Moša, the director and playwright, presented his Schveik in Terst, Italy, in 1998; two years later in Bautzen, Germany, and in March 2003 in Rijeka, Croatia. After the three successful premieres, he presents the play in the environment in which Schveik is at home.

In his novel, Jaroslav Hašek makes fun of the absurd Austria-Hungary empire, its dull machinery, he makes fun of the principles of the state administration, provincial career-hunting so obvious in the army, and most of all he makes fun of an inability of any order to file and identify a person and treat such a person according such a filing, defining his/her social role. Using his humour, Hašek workmanly shows what happens with such an effort if it becomes a means of power of people, both intelligent and idiots. Logically, ideals and laws are turned into a sad farce due to personal ambitions or opportunism.

František Josef I. a jiné

Nothing else than “the best of Schveik”

The novel by Hašek has been put on the stage and screen many times. Even the director Stanislav Moša did not stage this novel for the first time in the Brno City Theatre, as he had put the novel to the stage several times abroad.

What is appealing in the Moša´s play is the endeavour to get free from the tradition of the best-known dramatisations using a form which is not completely linear.

Two actors alternate the leading part: Zdeněk Junák and Erik Pardus. As it could be expected – with the typical pipe. Erik Pardus avoided the literal interpretation by Rudolf Hrušínský. Pardus equipped his Schveik with an exaggerated goodness emerging from gestures oscillating between conciliatory spirit and debility: disarming endless smiles, conspiratorial winking and constant nodding. As well as the other actors, he knows how to amuse.

The play runs smoothly especially due to substantial shortening of the story; the spectator is presented the well-known parts in a quite shortened version. However, the play lacks the real sense and it is nothing more than ”the best of Schveik” expressed with dance and music.

Hašek, Lada, Trnka, Steklý, and Hrušínský – these are the names which for eighty years have been contributing to the fame of the best soldier of the World War I – Joseph Schveik. A soldier so famous that sometimes each of us behaves just like him.

The theatre fame of the “good soldier” is a little less splendid. Stanislav Moša is the author of the most recent staging of the most famous Czech novel in the Brno City Theatre. He did not approach the Czech spectators directly: he presents Schveik not as a complete fool, which Schveik is sometimes considered when he becomes a nuisance, but Moša presents him as a person who defeats the stupidity of the state administration and the military machinery of the Habsburg empire with his “reporting obediently”. Moša presented his play first to Slovenian spectators in Terst, Italy, then to German spectators in Görlitz and Croat spectators in Rijeka.

Village wake. Maybe in Žižkov, maybe in a marketplace of another Central Bohemian town. Touring theatre comes and the play begins which finally changed the map of Europe and the world. Putting the Hašek´s novel on stage is really “a tough nut to crack”. Moša opted for a quick change of scenes in a cabaret style with tunes, dances, jokes, stories and all the well-known episodes and statements reflecting the life of the good soldier.

However, from the point of view of a sensitive spectator both from this country and abroad, the director succeeded perfectly in the rehabilitation of Schveik not only as a wiseacre and a fool beyond repair, but as a Czech always tramped on by the history who finally finds an efficient and admirable manner of “going for the jackpot” tricking the state administration and who, with a little of good luck and pretending silliness, makes fun of the real stupidity, decomposing it and beating it. At the same time, he is able to inject optimism in his equally tramped-on colleagues.

Zdeněk Junák and Erik Pardus, the actors interpreting Schveik, are perfect. Junák tries to show his character as a thoughtful philosopher. However, in the first night performance, he did it so thoroughly that he slowed the performance a little. Pardus plays using body language: his eyes are clever, laughing, destroying the power. Besides Jago in Othello, Schveik is his most important role; those who award Thálie and Radok prizes should carefully watch. Of course, if they are capable of doing such a thing. Human life is not ever so funny, you know.

The Brno Municipal Theatre (MdB) has been noted recently by large audiences particularly due to its resourceful musical projects bringing a lot of inventive authorial and execution insights in comparison to some Prague stereotypes of low musical qualities. Dramatic titles sometimes remain in the shadow of this musical production in the Brno theatre in Lidická Street. Wrongfully!

This year’s premiere of the original stage performance of the famous Hašek’s novel The Adventures of the Good Soldier Schveik proved again that the well-known theme could be perceived from different aspects – however, the value substance always wins. There were stage and film versions, some successful other subnormal, but Hašek’s genius always asserted itself finally due to the timeless wisdom of common sense. The new Brno version based on the Klicperian’s “popular theatre” was put on by the theatre director Stanislav Moša as a scenographer and a director. His intimate knowledge of the theatre ensemble allowed him to choose individual characters with respect to their typological characterization as we have fixed them from various stages and timeless art perception presented by Josef Lada. The title character alternated by Zdeněk Junák and Erik Pardus will not let anybody doubtful that the Hašek’s spirit is omnipresent on the Brno stage. Their Schveik is naturally sincere, true, type-pointed. The other performers present themselves markedly on the stage too: Eva Jelínková gives a proportionate rate of folksiness and wisdom to her Mrs Müller, the characters of Bretschneider and Lieutenant Dub (Karel Mišurec or Jan Mazák) are coming with evident features as we remember them from films and Lada’s pictures as well as Lieutenant Lukáš played by Petr Štěpán. And Jan Apolenář, Tomáš Sagher, Stano Slovák and others playing “small” parts should not be forgotten either. They are all sharp as actors should be in this classical work, true, convincing, have a sense of light expression and occasional improvization, but only within the limits of the directorial plan apparent every inch. Since the very prologue perceived as a “theatre in the theatre” with period smooching songs (including the indispensable hymn of the Hapsburg Monarchy) the stage changes in logic sections and gradational rhythm on the background of scenic indications of period habits with secession posters and in the costume stylization corresponding to the action (stage setting: Emil Konečný, costumes: Andrea Kučerová). The Brno Municipal Theatre respects its audiences and can perceive their needs (take it all round, we are living in the capitalistic era!), but it does not pander in this title that would almost tempt to doing it: Hašek’s Adventures of the Good Soldier Schveik on the MdB stage are based on the principle of temperamentally realistic figuration submitted to the sharp self-control of perfect artistic conception.

Small example: In Schveik’s anabasis we meet a lot of peripheral characters with detailed dramatic creations. While these thumb sketches of high artistic qualities would sink in mere complementariness on the majority of present Czech stages, they become unforgettable pearls on the Brno stage – let’s just name Ladislav Kolář’s performance of Padre Katz or brilliantly refined mimic-rhetoric nuances of Ján Jackuliak playing Pepek Vyskoč. Ountless numbers of similar moments are offered by the Brno performers. Disregarding other assets, this is another reason to consider the performance successful. 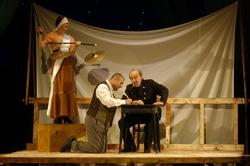 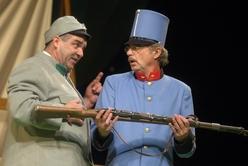 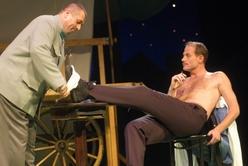 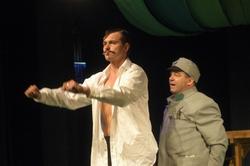 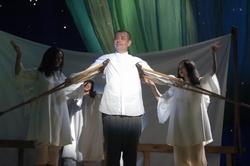 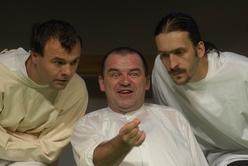 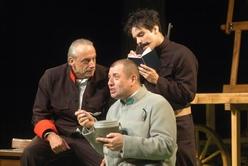 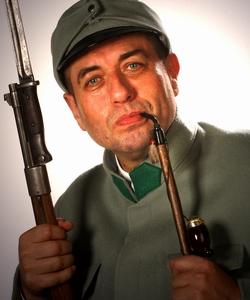 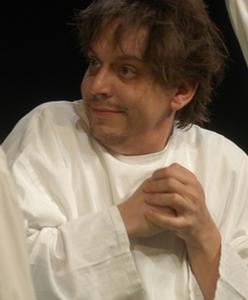 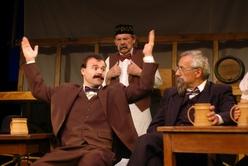 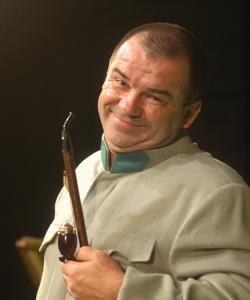