THE ANGEL AND THE SPARROW 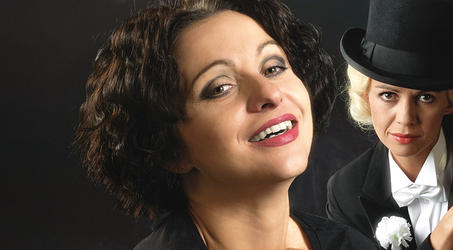 Edith Piaf and Marlene Dietrich - two of the greatest names in international show business. The first of them enchanted the world with her singing, her moving life story and unostentatious appearance, while the other did the same with her beauty, elegance and bewitching stare, being one of the first European (German) actresses to manage to become popular in Hollywood. The first one longs to experience true love and always goes overboard when feeling something new, while the other changes men (and perhaps also women) like coats and doesn´t bother to hide her cynical opinion on romance. The first dies of exhaustion at the age of forty-seven and all France grieves for her, while the other lives to the admirable age of ninety-one and her native Germany considers her a traitor. They are so different and yet they manage to find a common rhythm, common topics and even a common love.

This musical drama, based on a script by David Winterberg, which plays with the women’s life stories and covers a love story and the history of the friendship of these unforgettable women, had its premiere at the Burgtheater in Vienna in 2014, where it met with disarming success. It’s not really surprising, as almost twenty immortal songs by the two stars can be heard during the performance (sung live by the actresses, of course)! At present, a new version of this successful production is being created for a Swiss tour under Stanislav Moša´s direction. Our theatre will have the honour of showing it almost at the same time, in a Czech premiere to take place on 7th November 2015 at the Drama Theatre. It features Stanislav Moša´s directorial concept and is conducted by Karel Cón and directed by Igor Ondříček.

ANGELS AND SPARROWS STARTED TO SING IN BRNO

(…) In this brief review it isn´t probably necessary to mention everything that Edith and Marlene experience together on stage, or investigate whether they were really lovers too, or indeed whether the cold beauty Marlene envied Piaf’s resolve in looking after up to three lovers at the same time. However, Ivana Vaňková and Hana Holišová´s performances as these characters are worth mentioning. Ivana Vaňková is a long-legged Brno beauty who is sometimes considered cold or compared to Marilyn Monroe. One should not forget her passionate performance as the uncontrollable Rada in Gypsies, though. Her Marlene is an exact portrayal of the sentimentality, courage and clear attitude to life that earned Dietrich the title of traitor to the Third Reich. Hana Holišová gives a stunning acting performance as Edith. She thrills the spectators, sending chills down the spine with her perfect interpretations of Piaf’s chansons all the way up to the final Non, je ne regrette rien, and at many other moments. Holišová´s Piaf is not only a symbol of peerless excellence, but also of a ruined life, a person in desperate need of support, destroyed by alcohol and morphine. (...)

(…) Apart from the real moments from the lives of both heroines, the current production of Sparrow and Angel deals mainly with the friendship between Edith Piaf and Marlene Dietrich from when they first met until they died. (...)  It is a chamber production written for six actors. It needs to be pointed out that there are only two central roles - Sparrow (Piaf) and Angel (Dietrich). The job of the other actors (who certainly need to be here, too) is to help create the environment for the two protagonists. Markéta Sedláčková stars as Edith Piaf: she has fully immersed herself in the role of the French chanson singer and plays her precisely right down to the tiniest detail.  In the song Mon Dieu, her singing literally makes a shiver run down your spine. Sedláčková expresses all of the many facets of her character perfectly. Her Piaf has a child´s spirit melded with the character of a star from the street who rose to fame, and of a woman buffeted by the winds of fate.  Sedláčková´s Piaf is playful and emotions stream from her, yet despite this she remains herself. Though she uses some gestures characteristic of the famous Edith, she doesn´t try to copy her at any cost. Ivana Vaňková is altogether different, embodying as she does the cold German (and Hollywood) star of the silver screen, Marlene Dietrich. She was known for her icy charm, with which she managed to enchant both men and women, and she is depicted here in all her cold perfection. Ivana Vaňková´s version of Marlene certainly doesn´t lack for female charm and yet exudes a certain practicality in the way she takes care of “lost” Edith in both her normal and artistic life. Her seductive, motherly and friendly Marlene simply suits her to a T, just like the well-made costumes. (...)

A beautiful two hours, a performance with songs which will never age and will always be loved by audiences everywhere – this is Brno City Theatre’s new production about Edith Piaf and Marlene Dietrich. It’s playing at the Drama Theatre, but it isn´t a drama, really – it’s actually more of a musical, because what matters here is to get all those beautiful songs by the two legendary 20th century singers onto the stage, and add a touching story about the friendship and everlasting mutual love between the two women. (...)Markéta Sedláčková was great as Edith, and gave full expression to her joy in the role through Piaf’s most beautiful songs, mainly Mylord and Je ne regrette rien, of course.  The singing propelled the spectators out of their seats and forced them to clap to the rhythm. Ivana Vaňková’s Marlene also moved everyone with her melodramatic songs. (...) Just like the actresses, the musicians gave all they could and, thanks to the inventively beautiful arrangements by Karel Cón, took the songs right up to the next level. (...)

(…) The director chose several clear means of expression. Everything is based around two actresses, with all other characters and scene changes being taken care of by several actors occupying many different sets of clothes, and many roles. This creates the illusion of a live environment filled with characters, dominated by two of them: the Sparrow and the Angel. (...) In her role, Markéta Sedláčková was a geyser, a hurricane in a fragile human body - an admirable performance in terms of both singing and acting. Ivana Vaňková as Marlene also deserves a lot of admiration. Even though she was portraying an “angel” (and it is often difficult to play such positive roles), her character was believable, sincerely caring, and her interpretation of the songs was beautifully sensitive. (...)

(…) The directorial concept for Brno was prepared by Stanislav Moša, while Igor Ondříček was in charge of the direction itself. Even though all the dialogues and monologues take place in Czech, all the songs remain in their original form and so both the main protagonists sing in German, French and English. (...) The main storyline of the whole production centres around the beginning of the friendship between Marlene Dietrich and fourteen-years-younger Edith Piaf, the point to which its limits moved and the experiences the women may have shared. Markéta Sedláčková was the Sparrow (Edith) and Ivana Vaňková her guardian angel in an intimate drama crammed with nostalgic songs and explosive feelings, and marked by the sometimes almost electrifying attraction that appeared between them. Tiny Markéta Sedláčková, with her rich contralto and ceaseless energy, contrasts completely with the tall and serious Ivana Vaňková. Both actresses were well cast; it was if the roles had been tailor-made for them, particularly in the case of Sedláčková. Vaňková, in a tail-coat and blond wig, came over as a charming but very strict woman who is well-aware of her strong points, fame and power. On the other hand, Sedláčková was like a restless child in her simple black dress. Her ringing laughter was accompanied by strong words. Her gestures reminded one of an adolescent girl when she was in love, or a lovelorn old woman when she was drowning in alcohol and drug addiction. She played all aspects of the character with great sensitivity. (...)

WHEN A SPARROW LOVES AN ANGEL

(…) Even though it’s based on real events, this isn´t only a historical story – Sparrow and Angel is mainly some kind of theatrical retro show revisiting old hits that are known across the whole world even today. Spectators thus have the opportunity to experience not only a musical biographical drama but also, and mainly, such mega hits as La vie en rose, Milord, Non, je ne regrette rien and, for example, Sag mir, wo die Blumen sind. (…) I saw Ivana Vaňková (Dietrich) and Markéta Sedláčková (Piaf) at the premiere. Even though the costume designer has dressed them in almost identical replicas of the famous ladies’ best known clothes, the actresses do not behave like clones of the artists they are playing. The show is mainly about the clash of two worlds: the unobtrusive appearance of unpretentious and sensual Piaf, and the magical elegance and beauty of the Blue Angel. Both of the aforementioned actresses try to convey this through their acting and avoid attempting to imitate the unbeatable voices of Piaf and Dietrich when singing. Vaňková relies on a deeper, darker tone colour, while Sedláčková is a lot louder in getting across the expressiveness and strong emotionality of her chansons. It should be said that the singing performances of both actresses are utterly convincing and masterful. Director Igor Ondříček doesn´t force the actresses to imitate the ladies they are playing, even though Sedláčkova logically uses Piaf’s famous gestures and posture: when singing she adopts a somewhat stooping manner, with her palms on her hips. Karel Cón´s music arrangement is also deserving of praise, as he has preserved the sound of the original songs while not playing them with his orchestra as if they were purely museum pieces. 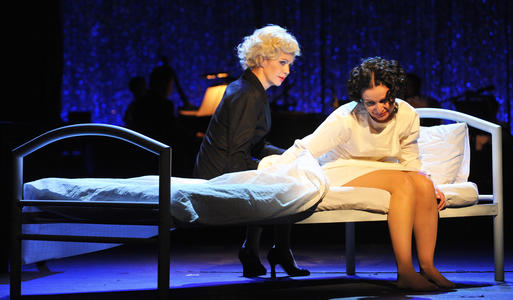 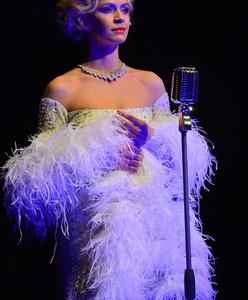 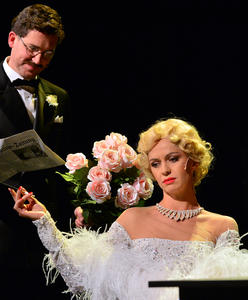 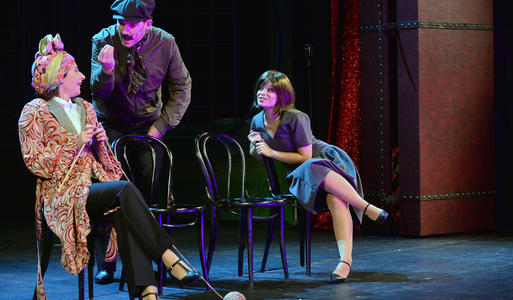 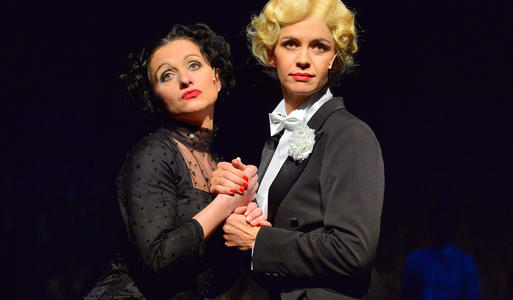 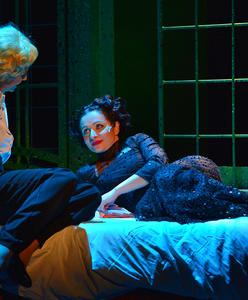 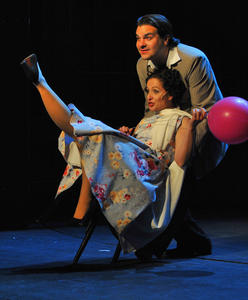 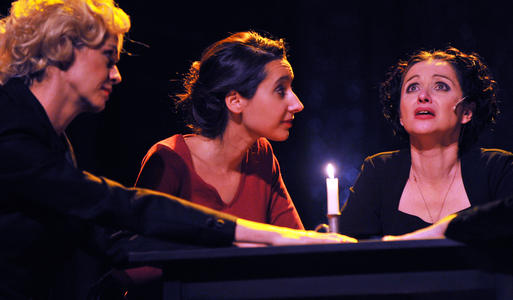 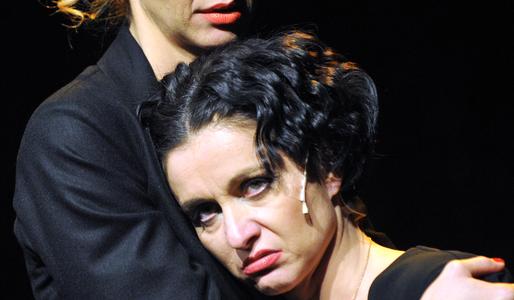 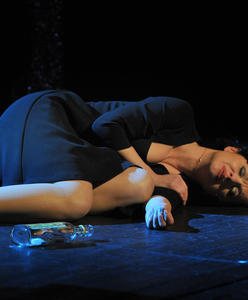 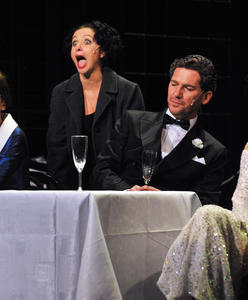 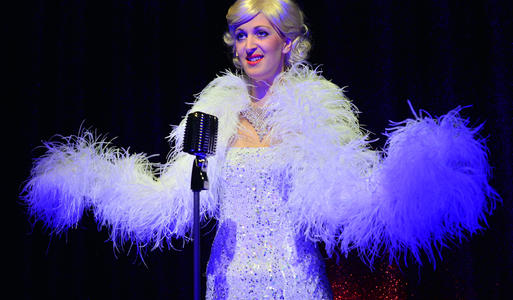