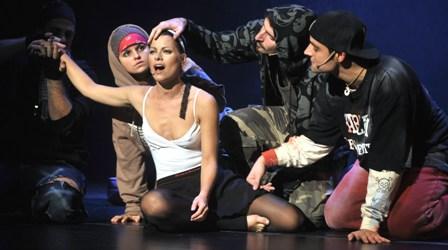 Zdenek Merta and Stanislav Moša have already prepared several musical shows for our theatre, of which the most recent, the fairy tale musical “Garden of Miracles” and also the first – the musical fairy-tale “Midsummer Nights’ Dreams” are still performed today.

This time the authors have prepared the musical trilogy named The Divine Comedy. The first part, Inferno, as with the whole work, is a free interpretation of Dante’s poems. However, everything takes place in modern times, and of course with contemporary music under the direction of Stanislav Moša. The main hero of the trilogy, the currently young sculptor David, immediately becomes the double victim of circumstances which rich aristocrat Sebastian introduces into his life. Sebastian commissions David to create a statue of his beautiful young wife Bee – however, from the final form of his wife’s statue Sebastian can tell that during his work David has fallen in love with her. When Bee dies due to Sebastian’s vengeful actions, David decides to descend into hell in order to return her to life. His guide through a contemporary version of hell is Cheetah’s wife… We wouldn’t like to give away the whole highly original (though hundred’s of years old) poetry-inspired story. Let’s just say that the most important aspect is the strength of human love, which is able through will alone to overcome other, (seeming at first sight to be) incontrovertible laws of our world and universe.

Inferno - a philosophical as well as artistic concept

The hell which we live

Iveta Macková 1. December 2008 zdroj Kult.cz
The world premiere of the first part of the loose musical trilogy "A Fateful Comedy", named "Inferno", was put on by the Music Stage of Brno City Theatre midway through October. As has happened many times before, the creative team behind this work is the proven pair made up of music composer Zdenek Merta and director Stanislav Moša.
Their Inferno is inspired by Alighieri's trilogy, The Divine Comedy, but mainly in terms of ideas and feelings, not in content. Moša's Inferno presents the hell in which we live. Just as with the original trilogy, the play is not conceived as three connected parts running one after another, but rather as separate pieces with one common denominator, the purification of man.
The main characters of Inferno are two sisters, professional dancers who are looking for a good job. However, only one of them is successful - Lena (Radka Coufalová). From there, Lena sets off on a journey of success and prosperity, while Lucie (Hana Holišová) remains on the street, surrounded by criminality, drugs and violence. These two different worlds offer the producers great possibilities for breaking new personal ground in terms of the imagery used, as well as of dancing, singing and of course, acting.
The author of many scenic images, ranging from the modern to the dramatic and the normal, is Jaroslav Milfajt, and Andrea Kučerová created a mixture of costumes. Part of the production is the music by Zdenek Merta, which is, however, more of an accompanying, rather than particularly inventive or strengthening element. It is a completely different situation with Lucie Holánková's choreography, which managed to intermingle the acting and dancing parts excellently, naturally and artfully.
This new musical production offers, apart from very solid acting, singing and dancing performances, also a great live show full of dramatic as well as optical effects, changes and tricks. However, it mainly addresses the spectators with a suggestion or reminder of how and in what we live, who we live next to and with what kind of conscience or moral principles…

'Inferno' as an illustration of life

Miloš Hudec 13. November 2008 zdroj Echo
Our Brno can be characterised from many angles. The most recent truism could be that Brno is a city of theatres. The traditions, current situation, importance and physical state of our theatrical buildings fully confirm this.
Each of our theatres has a different smell, colour, and also artistic level. Brno City Theatre has been standing on the highest rung of the ladder for quite a few years now. Under the leadership of its principal, Stanislav Moša, it constantly displays the very highest quality in terms of repertoire, commitment to proper direction, creativity and acting, stage sets, costumes and of course the musical elements of theatre. It should be said that every performance of this theatre is thanks to the efforts of ex-minister Pavel Dostál, one of the creators of the Music Stage, who, unfortunately, is no longer with us today.
On 18th October 2008 the auditorium of Brno City Theatre's Music Stage was filled to the last seat by an audience who had come to see the world premiere of the first part of the musical trilogy, Inferno, Purgatory and Paradise. The proven authorial duo Stanislav Moša and Zdenek Merta have labelled Inferno "a fateful comedy", although it fills one with various thoughts that are definitely not comic. Moša gave full reign to expression of his philosophical approach to life, and Merta, as usual, continued in the tradition of the greatest creators of music of times past. Both of their approaches, however, are youthful, original, modern and mainly deep in feeling. The theatre is full of what must be every creative, artistic and acting expression. Scenic elements alternate with singing, costumery, music, choreography and interpretational ideas of the highest international standard. One watches the creators with respect as they employ completely new, difficult and original ideas. If we wished to characterise the plot, most significant are the concepts of love, freedom, freedom of action and sacrifice, but also tragedy, violence and speculation: "Everything we see is but an illusion."
Stanislav Moša, the director of this performance, involved his closest permanent collaborators in the creation of the piece. Scenographer Jaroslav Milfajt, costume designer Andrea Kučerová, conductors Jiří Petrdlík and Dan Kalousek, and music arranger Igor Vavrda, choreographers Lucie Holánková and Leona Kvasnicová. More than eighty actors walked the stage. Let's name at least Radka Coufalová, Hana Holišová, Svetlana Slováková, Marta Prokopová, Petr Gazdík, Stanislav Slovák, Petr Štěpán, Martin Havelka, Jan Apolenář, Alena Antalová, Zora Jandová, Dušan Vitázek and Ján Jackuliak.
To conclude let's just mention Merta's dramatic music and the world-class idea with the musical glass cube at the end of the play. Even that created something from this performance that is unforgettable.

"Inferno", or the first part of a "Fateful Comedy" - a new milestone for musical theatre in the Czech Republic?

The Inferno is within us..! 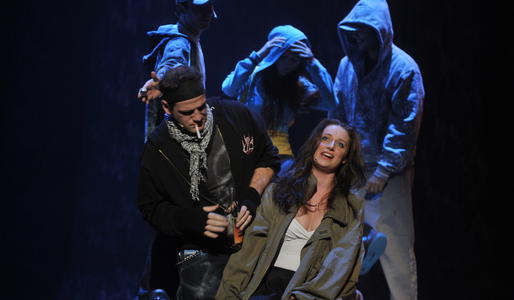 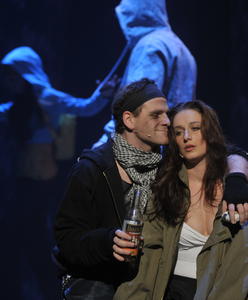 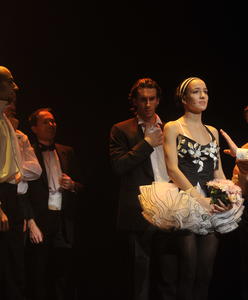 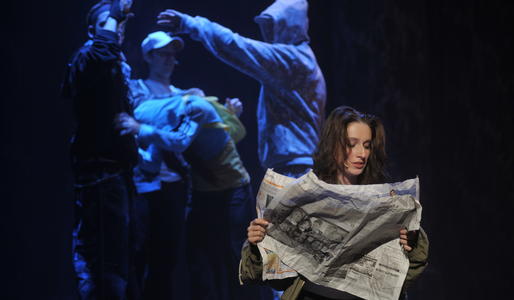 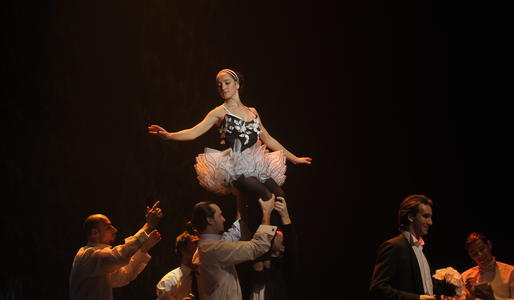 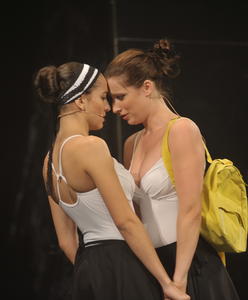 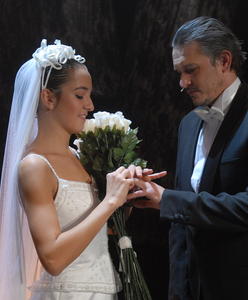 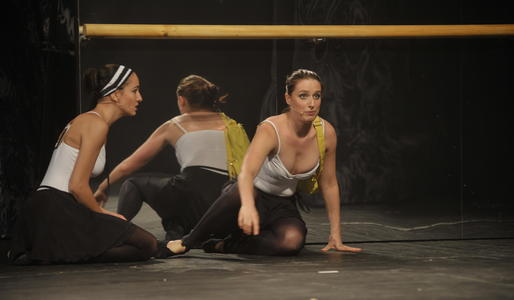 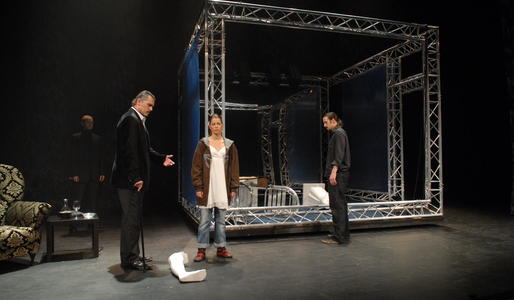 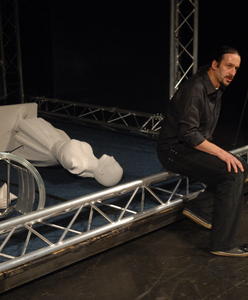 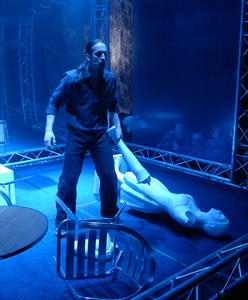 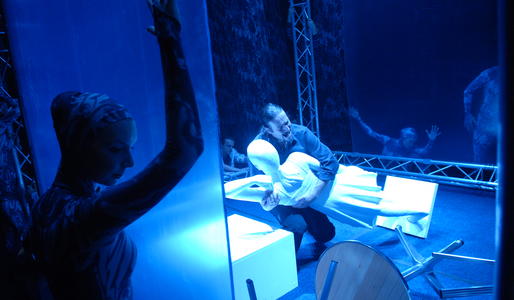