THE DIVINE COMEDY - part III of a musical trilogy

There is one beautiful idea that the only way we’ll be able to communicate with beings which visit us from outer space will be through music. What a fantastic thought!

The loosely-connected musical trilogy by composer Zdenek Merta and librettist and director Stanislav Moša, which is based on the three parts of Dante’s Divine Comedy – Inferno, Purgatory and Paradise, will be completed by a story from the near future. Both authors have always (apart from in the case of the musical fairy-tale Midsummer Nights’ Dreams) created original stories whose main theme was, in various forms, the most powerful human phenomenon – love. And this also applies to this stunning story in which our world is controlled by two non-human phenomena – modern technology, represented by robots, and a mysterious alien civilization which uses the robots to connect with our world.

The story takes place forty years after a mysterious disaster has happened on Earth and humanity has found itself set back in its development by a couple of centuries. Its main human character is Ruden, an old man who used to be a brilliant piano virtuoso. He meets a boy called Malej who accidentally comes across a functional piano in the ruins of a town. Malej falls in love with the mysterious instrument and learns how to use it during his teenage years, with a great deal of help from Ruden. However, he isn´t the only young person around who’s making use of a talent for an art that has fascinated us humans since time immemorial. Malej is fascinated by the beauty and skill of a young dancer, Oré. Unfortunately, their love is almost impossible in a world that has been destroyed by robots and is falling ever more under the control of an alien civilization. However… No, this would reveal more of this original story than is necessary. The production, which is full of surprises and beautiful music, will be directed by Stanislav Moša.

The wait for a new musical by the well-tried pair of authors Stanislav Moša – Zdenek Merta, (…) was worth it. (…) Paradise metaphorically takes us to the near future when our fates might be controlled by machines – computers and robots. (…) The music of Zdenek Merta gives a great power to the new piece. Again, he managed to compose sovereign musical music, combining various genres from symphonic to electronic music. There are also several impressive chansons, typical for Merta, and beautiful piano solos composed in various difficulty levels for three generations of pianists (actors). The whole composition is very pleasant to listen to. As we are used to with Stanislav Moša, the plot includes a number of metaphors and thoughts, at the same time it does not lack humour and grace. (…) At the premiere, the main role of the promising pianist was played by Lukáš Janota, completely convincing in all shades of his character. This is true about the initially conceited whippersnapper who prefers music to people, as well as the following scenes of the musical when the story gets a bit (un)humanly out of hand. The same character, forty years older, is portrayed by the charismatic Ladislav Kolář, human and inward as always. The music performance of Martin Bajer as a ten-year-old boy is beautiful. And then there is Viktória Matušovová, the fiery Oré, the main female character of the story. She is an excellent singer and actor with bags of talent. A lively dancer for whom the life filled with computers, robots, absurd orders and even a ban to have children is becoming more and more unbearable. Another significant and a very unconventional musical character is the AM111 robot, played masterfully by Daniel Rymeš at the premiere. Throughout the evening, he never dropped his pose even slightly in terms of gestures, facial expressions, the robotic walk and specific speech. He made us laugh and scared and the great make-up deserves praise as well. Zora Jandová turned into a mesmeric wise woman, singing Merta’s chansons beautifully, with an unmistakable tone of voice. (…) The piece was enhanced by the lively, attractive and in particular expressively exact choreography of Michal Matěj. This was one of the best dance experiences I have recently had on the Czech musical scene! This time the stage designer Christoph Weyers managed with a more simple technical solution. The stage is dominated by wooden poles, ropes and white canvases, framing and lining the space all the way to the rear stage, where the MdB orchestra is playing, perfectly coordinated as usual, conducted by Dan Kalousek. The simple stage creates an interesting contrast to the timeless costumes of Andrea Kučerová, which take the audience from the near future back to the very roots of humanity. The Paradise musical completes the authorial trilogy of Stanislav Moša and Zdenek Merta with great effect. Not only does it provoke thoughts about a world we might be led to by the frequently abused modern technology, but also brings pleasant melodies and impressive and dynamic dance acts. (…)

(…) This is an attractive third part of the musical triptych created by the tandem of authors Moša and Merta. (…) The warning voice suggests the danger, sensed yet again, of control of the world being taken by robots (…) or artificial beings controlled by more advanced but cruel civilizations from other stars. (…) At the end of the second decade of the 21st century, no other theatre can pride itself on a better, more professional musical ensemble with a continuous influx of talents. (…) A new and sharp one has appeared in Paradise: Viktória Matušovová played, sang and danced Oré excellently, as the girl whom the main hero and the saviour of humanity, of course, meets in adulthood. He is played convincingly by Lukáš Janota. And there are other stars, of course: Zora Jandová, Ivana Vaňková, Markéta Sedláčková, Ladislav Kolář, Jakub Uličník… dressed in perfect costumes designed by Andrea Kučerová. (…)

BRNO CITY THEATRE HAS CREATED PARADISE. A MUSICAL BASED ON ORIGINAL MUSIC AND DYNAMIC CHOREOGRAPHY

(…) It is typical for both Zdenek Merta and Stanislav Moša to (…) create their own, unique stories. The same goes for the Paradise musical, mounted as the world premiere by the Brno City Theatre. The authors decided to build upon the mightiest human phenomenon, and also the most commonly used motif of engrossing and unreserved love. We find ourselves in the near future controlled by modern technology and a mysterious extra-terrestrial civilization, and although we never see anything on stage, there is no doubt of it being omnipresent. However, it can communicate only with the aid of an artificial intelligence created by humans, which has completely defied its devisers. The main human character of the story, taking place forty years after an inexplicable disaster happened on Earth, is Ruden (Ladislav Kolář/Stanislav Slovák), a former promising pianist, now an old man, whom fate brings together with a young boy that finds a working piano in the city ruins. The boy named Malej (Lukáš Janota/Kristian Pekar) is so enchanted by the instrument that for a long time, he longs for nothing else than to play it. (…) However, it is becoming increasingly difficult to live in a world controlled by technology. Music sure is the main star of Paradise. Zdenek Merta has created stirring, rhythmic pieces, forming the most expressive element of the whole story, together with catchy lyrics. The choreographer Michal Matěj did not spare the actors this time, the dance performances (…) impress by their animality, dynamics, and boisterousness. (…) The stage is framed by wooden poles embedded in the ground which can be pushed out, allowing easy modifications of the space. (…) Thus the stage matches the fantasy story element perfectly. (…) The best acting performance is given by Daniel Rymeš who appears in the musical in the role of an advanced robot. The choreographed, slightly rigid movements together with a perfectly masked face are really impressive. (…)

At the premiere on 8 February, the original fantasy musical by Stanislav Moša and Zdenek Merta was applauded by the audience, captured by its story, music and the engagement of all performers. (…) The authors aimed to provoke reflection of human nature, society and its state, as well as the potential risks. (…) The strongly expressive singing, dynamic dance performance, rituals, mixed demonstrations of resignation and resistance lead to a uniting and symbolic end. With Paradise as the final piece of a free trilogy, the authors created an inspiring musical story with an idea, interesting plot and great music. It was produced by the successful executive team directed by the libretto author Stanislav Moša. Praise goes to the orchestra conducted by D. Kalousek. The stage design by Ch. Weyers enhanced the atmosphere together with the projections of P. Hloušek, (…) and the inventive costumes of A. Kučerová. (…) The actors performed their roles with great drive. The part of the main hero was played excellently by Lukáš Janota, who also deserves an applause for his piano performance. His antipode, the conductor and an insensitive executor of the AM 111 robot’s orders, was perfectly captured by the movement and singing of Daniel Rymeš. Zora Jandová appealed by her suggestive singing performance in the role of the wise woman. Ladislav Kolář intrigued us by his interpretation of the Uninvited Guest, a significant song of the story. (…) The singing performance of Viktória Matušovová was remarkable. (…) 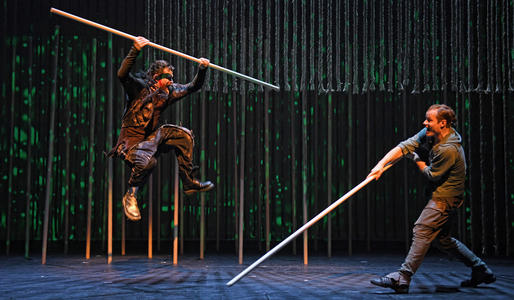 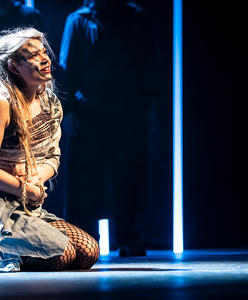 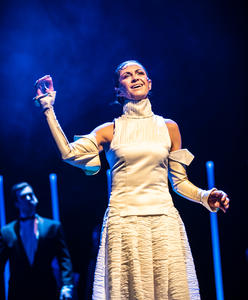 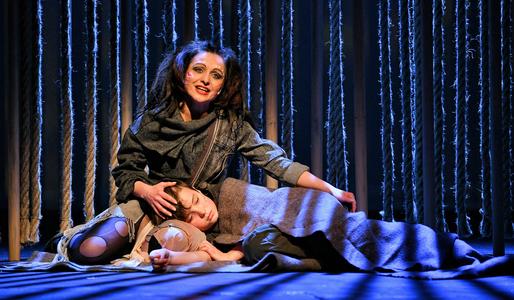 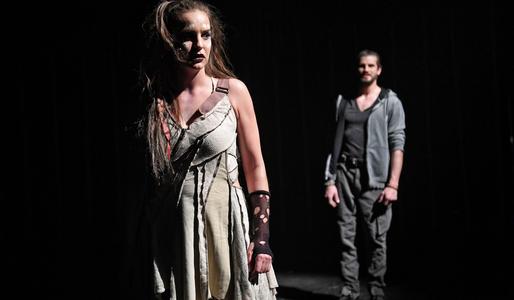 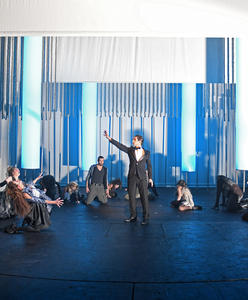 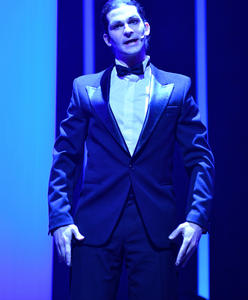 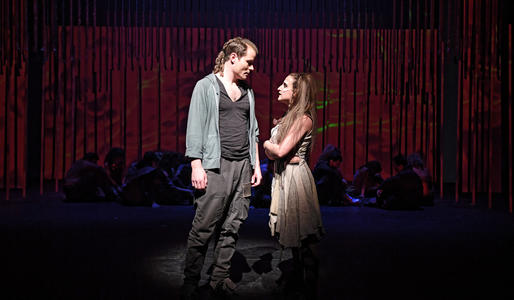 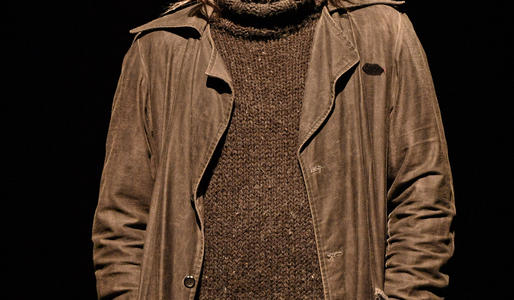 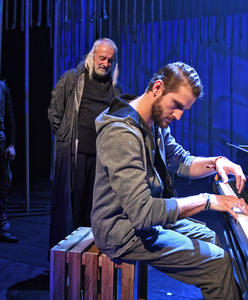 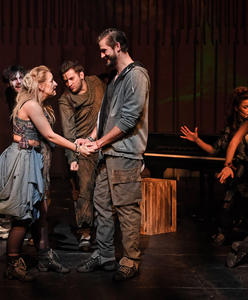 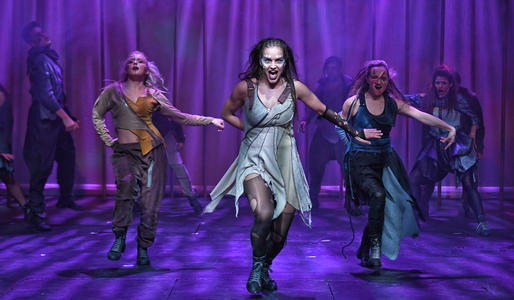