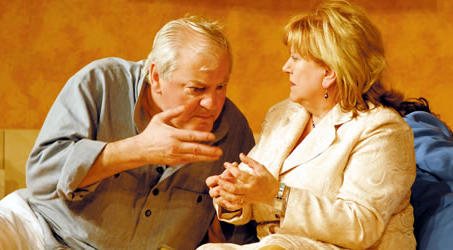 If Romeo and Juliet had survived, would their marriage have lasted? And if so, how would it be affected with his ignorance, her ambitions, their ungrateful daughter, no sons, the love story with an attractive friend from the evening school, God knows how many abortions, lack of finances, corruption or even a murder? The honeymoon suite of a small hotel in the East England port Bridlington is the place where Edie and Irene start their common life with a big dose of enthusiasm and excitement. But, as it usually happens, the future prepares a different, surprising fate for them …

Richard Bean is a discover of millennium for the British dramatic art. After the age of forty, when he had tried various civil jobs, he decided to become a dramatist.

And it should be stressed that he is an exceptionally original and highly intelligent dramatist who processes his themes and experiences (the Honeymoon Suite describes the environment he comes from) with his distinctive humour and irony. His plays Toast, Under the Whaleback, Mr. England and The Mentalists were given a lot of awards, the Honeymoon Suite itself was granted the Pearson New Play Award in 2003. According to foreign critics, the play is extremely witty and deeply sad, with Alan Ayckbourn’s scenic invention and ingeniousness.

Stanislav Moša introduced Richard Bean, representative of in-yer-face, in Brno. Maybe, to remember himself and the spectators that the theatre is not just a musical, the director of the Brno City Theatre Stanislav Moša came back to the dramatic stage management.

The triunity story looks back to the history of relation in a seaside hotel room, near a fishing and seaman quarter. Almost seventy-year-old Whitchell (Karel Janský) and Baroness of Marfleet (Zdena Herfortová) meet in the room where they experienced their wedding night.

Their meeting is blended together with reminiscences to the eighteen-year-old newly married couple of Irene and Eddie – acted by Johana Gazdíková, Lenka Janíková, Alan Novotný and Jakub Uličník, and then to the moment when their relation started to disintegrate and they were forty-three-year-old alienated beings renamed by the author to Izzie and Tits. Guest actresses Dita Kaplanová and Dana Pešková alternate in this reflection, while Tits is only played by Petr Štěpán.

The six figures mingle and meet on the stage but each couple is closed in its own time without possibility to lead a dialogue behind its limits to the past or future. The interesting, provocative principle leads the spectator to alert attention, whether the order set by the author will be violated.

The Honeymoon Suite is provocative, but it is far from the boulevard such as Every Year at the Same Time. It rather ranks among the line of dramas by which the Brno City Theatre polemizes with success with the typical Brno smear that its performances are commercial and make advances to audiences. Moreover, the performances of Herfortová (definitively, the role as a present to her last year’s jubilee), Janský, Štěpán and others can be called dramatic concerts. As always, by the way.

Bean’s comedy Honeymoon Suite processes the traditional theme of spousal crisis in an unexpected way. The play takes place in a suite of a coastal hotel where three key moments of the life of a couple are followed. The wit consists in the simultaneous presentation of three various phases of Eddie’s and Irene’s relation. Thus the newly married couple on their wedding night appears in parallel with the mature pair celebrating their silver wedding and the peacefully balancing couple of sixty-seven years old wife and husband.

Stage manager Stanislav Moša produces the bitter comedy about the marriage transformation with humour and the sense of seriousness of the situation. Three different meetings head towards gradual disintegration which signs are apparent during the wedding night. The performance arouses nostalgic feelings at the moment when it reminds of the volatility of headless amorousness replaced by resignation, passivity and rational detached view after many years of coexistence. In the final phase, Bean’s couple meets only as former friends after many years of separation.

The witty conciseness of one life mosaic is underlined by telling the whole story of marriage in the two-hour performance without any interval. The scene of honeymoon suite designed by Emil Konečný is intentionally static, the orange interior is only divided with a glass balcony door with a supposed view of the sea. Gradually, six figures come to this unchanging space and their replies of various times complete each other and permeate. Such permeation of dialogues is represented by the scene when three representatives of Eddie, of various ages, want to open a window, while their female counterparts protest in unison.

The performances of the six actors are expressive and balanced but they should play the points more exactly. The newly married couple is acted by Alan Novotný alternating with Jakub Uličník and Johana Gazdíková or Lenka Janíková. I saw a repeat with Alan Novotný whose eighteen-year-old Eddie is a direct and slightly impertinent fish shop worker, while Irene acted by Lenka Janíková is an attractive young lady of courtesy. The difference of characters is manifested after twenty-five years. The husband acted by Petr Štěpán became a self-pleased entrepreneur who wants to buy his wife’s affection with a ring with diamond, Dita Kaplanová (alternating with Dana Pešková) gave Irene features of emancipated woman who wants to study at the Faculty of Law and admits easily her infidelity. Aged Eddie (Karel Janský) made home of the fatal room, but he tries in vain to evoke the memories of newly-wed happiness in her wife who has worked her way to the top of society. Zdena Herfortová acts her as a refined baroness who has lost the ideals of eternal love long since.

Hardly any contemporary play condenses the paradoxes of life so clearly as Bean’s Honeymoon Suite. The Brno City Theatre bet on the title which will not surely lack viewers.

Conjugal Etudes Or Three Comedies in One Play

The Brno City Theatre presented the Czech premiere of the English comedy Honeymoon Suite at the weekend. The text of the contemporary British dramatist Richard Bean is a bitter comedy about the transformation of life attitudes of a married couple.

The action is situated in a hotel room, where the fate of Eddie and Irene is followed. The spectators will see three key moments in the fifty-year relation which came from headless amorousness to elated sarcasm. The principal wit of the screenplay consists in the fact that Bean placed all six figures in the room at the same time. Three Eddies and three Irenes appear on the stage: as nervous eighteen-year-old newly married couple on their wedding night, then when they are forty-three at the occasion of their unsuccessful silver wedding and finally, when they are sixty-seven and have been living separately for a long time.

Stage manager Stanislav Moša tried to differentiate the genres of the three forms of one relation. The bride and groom in love as if fell out of a crazy comedy, the middle age is a disordered drama with the sense of absurdity. The dry English humour and top view of the oldest couple reminds of the old good conversation comedy.

The marked changes of heroes indicate how everything in life is relative, inclusive of human relations. This is the principal information of the play which does not philosophize and, fortunately, does not accumulate any “serious” messages. And this original view of human life will be the main reason to visit the Brno City Theatre.

At first sight, the newest premiere of the Brno City Theatre Honeymoon Suite looks like another situation comedy. But a moment later it is clear that Richard Bean’s play is not just a simple comedy. As the comparable Stoppard’s Arcadia it combines cleverly time levels, but in contrast to the old history and presence in Arcadia only three sections of the life of a married couple - honeymoon, crisis and meeting after years are depicted in this case. Every period has its protagonists. Stage manager Stanislav Moša took the trouble two find actresses who are alike, for middle-aged Irene he “borrowed” Dita Kaplanová from the Goose on the String Theatre. From acting couples you will certainly remember Karel Janský and Zdena Herfortová who got wise at the end of life (and gloss well). The stage by Emil Konečný deserves appreciation. The heroes would certainly remember such suite. And spectators too. 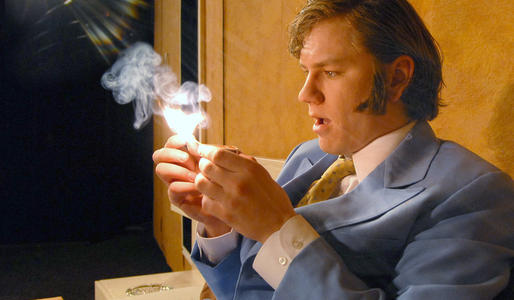 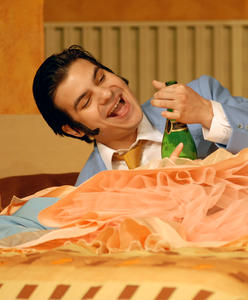 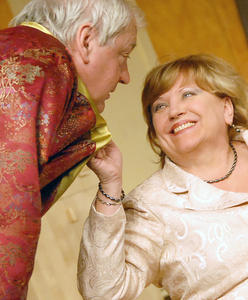 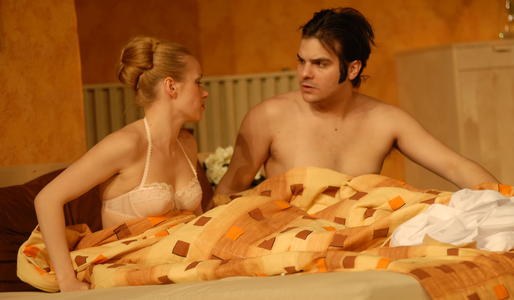 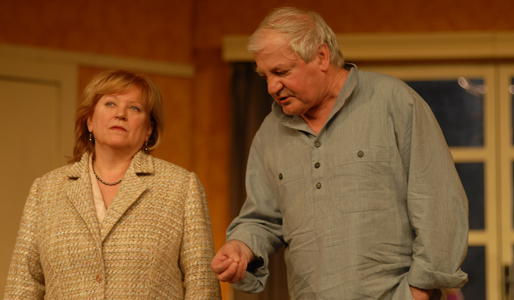 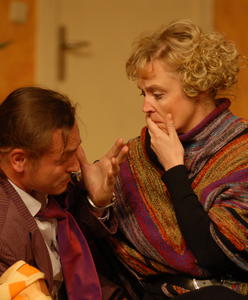 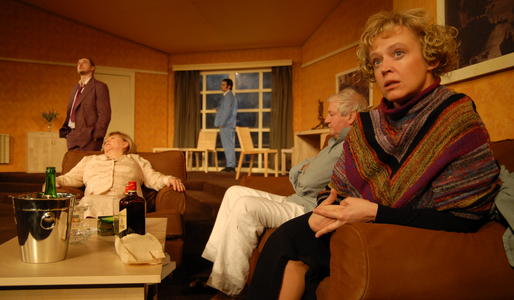 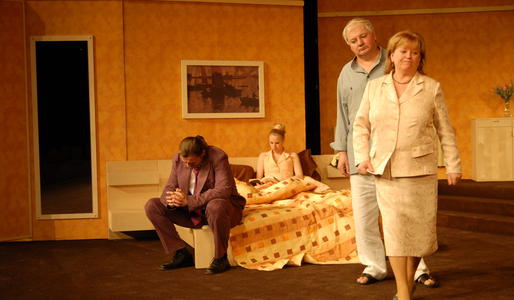 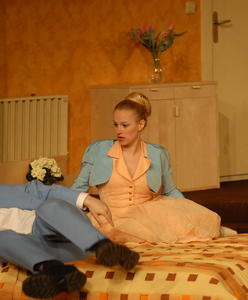 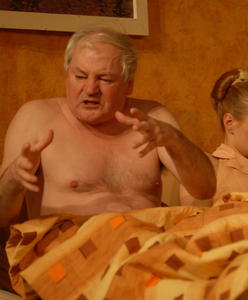 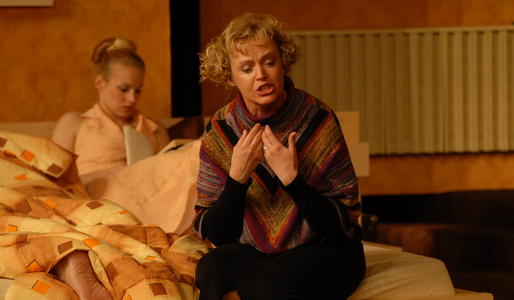