A tragedy of foolishness

Boleslav Polívka in the title role

Once upon a time there was a mighty king who had three daughters – Goneril, Regan and Cordelia. One day, he decided to divide his empire up between them depending on the words they used to express their love for him... The Elizabethan genius raised the ancient Celtic tale to the heights of a great drama. The basic conflict that drives the play, which is considered to be the peak of Shakespeare´s tragic art together with Hamlet, consists of the contrast between the old, patriarchal world and the new, ruthlessly individualistic one. In the very heart of this dramatic exploration of the human lot is the powerful image of a pilgrim and his journey. The exiled king wanders from the palace to the wild, from pride to humility, from bossy and authoritarian self-centredness to compassion and forgiveness, from a royal crown made of gold - a symbol of fame, wealth and power - to a wreath made from weeds and meadow flowers, and from smug reason to madness as a paradoxical source of knowledge about the intangible meaning of all worldly efforts, about the hidden reason behind all earthly existence. This work of genius, written four centuries ago, touches all of us deeply with its poetic power, its engrossing though raw testimony and the urgency of the questions which it asks. Boleslav Polívka stars in the title role.

POLÍVKA´S LEAR AS A DRAMA OF SELF-REFLECTION

(…)  This story from the ancient chronicles with its roots in distant Celtic times has been known since the Middle Ages in several versions, as well as in folklore. Shakespeare´s multi-layered, crowded drama has also received many philosophical or theatrological analyses, many film adaptations and tens of stage productions. Moša´s version is based on the contrast between the traditional, pre-Christian patriarchal order with an acknowledged sovereign authority (royal as well as fatherly) and its gradual decomposition under the pressure of ruthlessly ambitious individualism, which cynically despises any form of morality. It fully respects the story’s complex interconnection of family, social and political relationships, the contrasts and parallels of human fates as they hurtle towards destruction, as well as the clear topicality of the timeless message. The extensive three-and-a­­-half-hour-long evening is divided up on the stage with its staircases and moveable walls (Christoph Weyers) by the noisy drums and trumpet played by an ensemble on a high platform (Zdenek Merta). The partially stylized contemporary costumes by Andrea Kučerová still have duelling swords. After last year´s excellent Shylock, Boleslav Polívka is unsurprisingly a real spectator magnet. And with the ambivalent King Lear, who can only see clearly when he gives way to madness, he really has done it again: in his dialogues with Michal Isteník’s excellent fool, as well as elsewhere, he bitterly realizes the irreparable failures with which he has blighted his life, leavening his declamatory pathos with nuances of the clownery that comes so naturally to him. This production with its alternated cast is well-balanced and well-acted, and definitely deserves unbiased and perceptive spectators.

POLÍVKA´S LEAR AS A JOKING JOB

(…) The actresses playing the “bad sisters”, Goneril and Regan (the author of the review saw the alternate actresses Pavla Vitázková and Lenka Janíková) dominate the stage. Both of them are strong and aggressive from the very first act, with their characters strongly supported by their costumes, particularly in the case of Goneril, whose black overall and shoes with pointy heels complement her plentiful self-confidence and assertiveness. Another character that stands out is Michal Isteník’s Clown, thanks to both the text and the actor´s relaxed and lively performance. (...) Polívka as King Lear is quite suppressed and orderly in both voice and gesture (as he was in the Merchant of Venice). (...) Polívka shows Lear´s self-confidence and power at the beginning of the play and his anger with honest Cordelia (Ivana Odehnalová, one of three alternate actresses) via the pose of his body, with his chin pushed forward and arms stretched regally before him. He concentrates his vain rage into the expression of his face and the constriction of his voice as he strives to suppress his anger. Lear reacts in a similar fashion to his blatant betrayal by his daughters. He doesn´t escalate his anger and despair very strongly. When the pain of his character disintegrates into madness, he conveys it through the medium of ironic jests. (...)

KING LEAR, OR THE ABSURDITY OF INGRATITUDE

King in jeans, castles made from concrete, an almost naked dancer at the beginning and end, and a virtuoso display of acting with three fools – this could be a brief overview of the new production by Brno City Theatre. People are flocking to see it in great numbers and the Music Theatre’s large auditorium is full to bursting. (...) The biggest reason why the theatre is sold out until the end of the year is Bolek Polívka´s acting performance. This former clown with a red nose becomes Lear to such a degree that you can imagine that Shakespeare wrote this play for him. Whether he’s being impassioned or austere, snobbish or down-to-earth, boastful or humble, a king or a lunatic, his acting is utterly believable, as are the noble words he uses to complain about the Gods. And on top of that, he manages to put something into his characters which makes them more human: no mortals are made from marble, even though playwrights often try to convince us of the opposite. Michal Isteník follows his lead and plays the fool so well that you accept the wisdom which he puts into his part as if it were your own. The third astounding performance is that of Lukáš Janota, who changes from a noble son into an almost naked beggar who is so crazy that you just have to love him. As I have already said, a virtuoso display of acting with three fools. (...) The concrete castles on Christoph Weyers’ set feature staircases which intertwine in a bizarre fashion and lead nowhere, symbolizing the absurdity of the plot. The contemporary costumes by Andrea Kučerová evoke the timeless message of the play, while Jiří Josek´s translation is of such high quality that the blank verse doesn´t stick out. Zdenek Merta has created supremely expressive music for two percussion instruments and one trumpet, and the director, Stanislav Moša, has shortened the very long play in a suitable manner which has only improved it. He has, however, left enough space for those three fools so that both they and the audience can enjoy the tragic absurdity of the play. (...)

(…) Polívka stars in the role of King Lear, a foolish old man who fails as both ruler and father. His performance gradually intensifies over the course of the play, but he is at home with all the aspects of King Lear as he transforms from popular ruler to crazy and broken old man. Polívka clearly enjoys playing the part, and provides an insight into the torn psyche of the old king with casual urgency. (...) However, the rest of the acting ensemble certainly doesn´t stand in his shadow, giving superb performances. (...) Petr Štěpán is great in the role of honourable Kent, and Michal Isteník also excels in the role of the king´s jester. His tragicomic performance involves singing (...) and once even rapping, completing his image as a clever fool. Zdeněk Junák doesn’t disappoint either in the role of the deluded Gloucester who must go blind in order to see the light. Lukáš Janota is inconspicuous at first as Gloucester´s first-born son Edgar, his role developing only after he becomes the semi-naked beggar Tom with a performance that is one of the highlights of the production. (...)

(…) Polívka, of course, gets the greatest attention. His Lear is no old man with one foot in the grave: he is very jolly at the beginning, very sure of himself, with no wise declamations, managing to wittily deflate many moments right up to the middle of the production. Polívka’s almost informal take on the crazy king is very likeable. He doesn’t go overboard with the character, showing how madness catches up with him not because of his age but due to realising the fatal mistake he has made, and basically also to his new understanding of the way the world works, with all the hypocrisy present in human relations.  His finale as Lear is suitably moving, as well as tragic and believable. Polívka is naturally the focus of this piece, and is well cast in the role, but the production also offers other interesting performances. These include Lukáš Janota’s interesting study of a lunatic, Petr Štěpán’s excellent and loyal Kent, and Lear’s cunning and wily daughter Regan, played by Lenka Janíková. These combine effectively with Michal Isteník’s poetry-singing fool, whose simple songs provide an even more ironic commentary on all the tragic events, in what is certainly an interesting directorial concept. As far as the acting is concerned, what |I really appreciate is that while Polívka is naturally dominant here, all of those named above don´t just play secondary roles or function as extras but are his equal partners. They act as natural counterweights throughout the whole extensive production thanks to their skilful acting and dramatic characters.

(…) How many times have I read this tragic masterpiece by Shakespeare? Five times? Ten times? I know this story like my own shoes. So how is it possible that it impressed me again here, from the very first sentence up to the last, and had me all thrilled to see what would happen at the end? (...) Director Stanislav Moša lends the tragedy extensive space and pathos, supported by Tomáš Cvejn´s drums and Zdenek Merta´s music. (...) You will forget all Bolek Polívka’s acting roles from the Manéž programmes and similar silly pieces when watching Lear. (...) He not only rules the stage in every sense of the word, he does so with such humanity and realness. (...) And who wouldn´t put everything into their acting next to such a king? Everyone gave their all in their roles. Michal Isteník showed a lot of talent, as did Petr Štěpán and Zdeněk Junák as high-principled nobles, as well as Lukáš Janota, particularly in the parts where his Edgar becomes the crazy beggar Tom to escape the danger he’s in.

(…) Director Stanislav Moša chose a stage set by Christoph Weyers in which a real staircase changes into paradoxical spatial optical illusions. The stairs don´t actually lead anywhere. This says a lot about the structure of the drama itself, in which there is no escape from fate. (...) The trio of Lear´s daughters is headed by Ivana Odehnalová as Cordelia. A positive and heroic character is always harder to play than a negative one. However, this Cordelia was really kind Mary from the fairy-tale Sůl nad zlato (Salt over Gold), transformed into the energetic protector of her ill father. On the other hand, Hana Kovaříková´s Goneril and Ivana Vaňková´s Regan were exemplary slim ladies that radiate evil with every move they make. The two ladies were successfully cast as schemers who persuade each other with resolute gestures that they rule the world, while in fact it is cunning Edmund, played excellently by Jakub Zedníček, who is behind it all. Zdeněk Junák´s Earl of Gloucester is monumental, as is Lukáš Janota’s Edgar: he really went overboard in his detailed portrayal of the semi-naked crazy man. Michal Isteník’s fool was an exemplary “companion” to the king. (...) King Lear, played by guest star Boleslav Polívka, was a strange and excitedly-awaited chapter in himself. In this beautifully constructed life story of the king who was fated to go mad, he showed the full range of his acting talent, moving from declamatory refinement to small plebeian nudges. (...) Brno´s production by Stanislav Moša proves once again that the best way to approach a great playwright like Shakespeare is with a professional attitude and with humility. That’s exactly how Boleslav Polívka and the whole acting team handled the piece. (...) 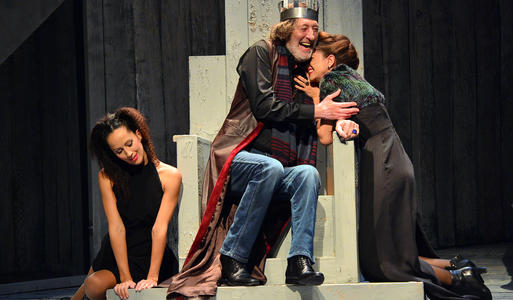 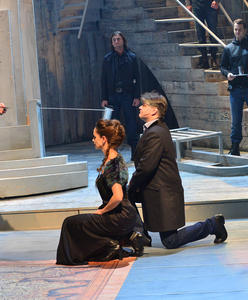 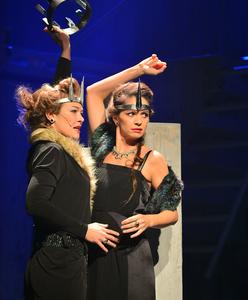 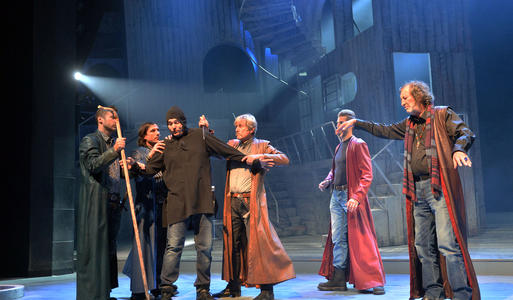 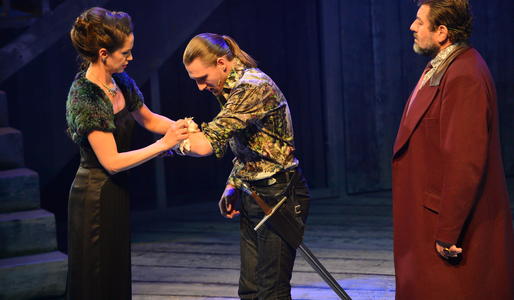 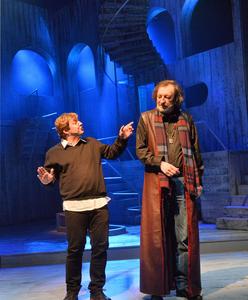 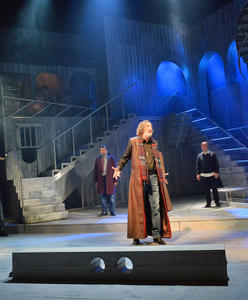 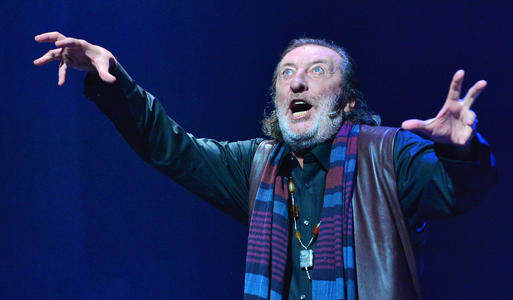 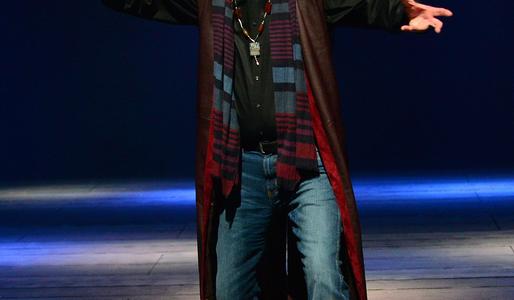 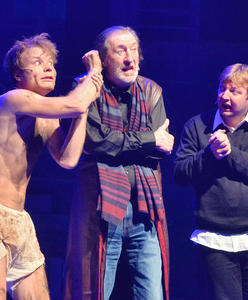 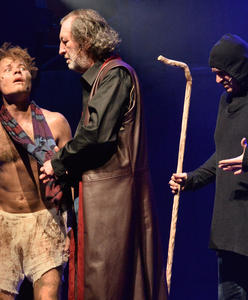 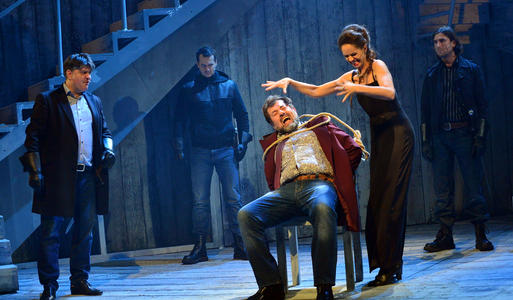