The musical Rent had its premiere in 1996 on Broadway, where it met with phenomenal success. Aside from several Tony Awards, it was also one of the few musical theatre works to win a prestigious Pulitzer Prize. It was one of the longest running Broadway shows ever, has been performed across the world several times and was also made into a film in 2005. The work, whose message is that despite great power and determination, we are still only mortal people, gained an iconic cult partly due to the fact that its author, Jonathan Larson, died shortly before the long-awaited premiere and thus never received the appreciation he deserved for his many years of work.

The touching, raw and often also cruel story takes place in the 1990s in East Village, an “alternative” part of Manhattan, New York, during a culminating AIDS epidemic. It concerns a group of people who, mostly through no fault of their own, find themselves standing on the edge of society. This eclectic mix of Bohemians, fledgling artists, prostitutes, homosexuals, homeless people and drug addicts spend their lives just trying to get by, and despite all the obstacles which are in their way, manage to find enviable strength and lust for life within themselves. Even though the musical concerns unhappy events from the lives of members of a very specific social grouping, it offers a gripping view of our human existence in which, after all, the most important things are love, desire and belief in the future, despite all difficulties. This charming and unforgettable piece, which is now a classic of musical theatre and which was based on motifs from Puccini´s opera La bohème is directed by Stanislav Moša.

RENT TALKS ABOUT FRIENDSHIP AND LOVE. WITH URGENCY.

Brno City Theatre’s latest premiere, the American musical Rent, takes the audience into the company of bohemians, prostitutes and homeless people. (…) The thrilling musical is the generational testimony of a group of young people from 1990s New York who live in the slums of East Village and struggle through their lives in search of their identity, inspiration or love. They live a bohemian existence which includes drugs, unrestrained sex, crime and fear of the AIDS pandemic. (…) The set by Christoph Weyers, with its peeling brick walls, evokes the inhospitable environment of a flat in a slum but works equally well when transformed into, e.g. a modern dance club. An impressive feature is the location of a six-member band right at the back of the stage. (…) The director, Stanislav Moša, focused on the urgency of generally applicable topics: unemployment, drugs, the loss of illusions. (…) The result is an energetic and compact expression of shared belief which often sends chills down one´s spine. (…) The character who unites the plot is the introverted Jewish film maker Mark Cohen. Daniel Rymeš has given him an inconspicuous and civil persona. This is typical for Rymeš, but his portrayal is also very meticulous and focused. (…) The second main character, the HIV-positive musician Roger Davis, is played by Kristian Pekar. After last season’s Saturday Night Fever it is another great acting opportunity for him, and he fully made the most of it. The character of Roger´s passionate lover Mimi was also played excellently by Andrea Zelová. (…) The most distinctive figure in the show, and one who brings the whole cast together, is the homosexual transgender individual known as Angel. Aleš Slanina portrayed his hero unpretentiously and as a believable human being. The lesbian couple, Maureen and Joanne, were played by Hana Holišová and Barbora Goldmannová. Holišová was great in the tricky and long monologue solo protest and their duet was one of the highlights of the evening. (…)

A famous story of a group of friends who are struggling with an unfavourable financial situation and the spreading AIDS epidemic but are still trying to enjoy each day as if it were their last despite the situation – this is the musical Rent by Jonathan Larson. (…) Directed by Stanislav Moša and translated by Zuzana Čtveráčková, Rent returns to Czech theatres in this Brno City Theatre production. (…) In the Brno version of Rent, Mark Cohen was played by Daniel Rymeš, who is well suited for the role of an introverted cameraman. His singing was also impressive. (…) His best friend Roger Davis was played by Kristian Pekar, who is excellently compatible with Andrea Zelová in the role of his lover Mimi Marquez. (…) Aleš Slanina gave the proceedings an energetic boost as the drag queen Angel, and Dušan Vitázek appeared as his partner, Tom Collins. (…) Collins is a role which suited him down to the ground. The characters that attracted the most attention were the extravagant Maureen Johnson (played by Kristýna Daňhelová, who clearly enjoys this role very much) and her friend Joanne Jefferson (Dagmar Křížová). Their duet was one of the high points of the evening. (…) The themes which are featured in Rent are still topical, and it is definitely worth your time to see this Brno production.

(…)When it comes to the genre of musical theatre, Rent is a stand-out production. (…) Spectators will be captivated by the immensely involving enthusiasm and openness with which AIDS and homosexuality are discussed. (…)  The directorial team found a way to present these topics naturally and make them urgently immediate for the audience. (…) The music arrangement tried to highlight the catchiness of the music naturally. (…) There is a minimal amount of spoken passages and so the label ‘rock opera’ really applies. (…) The director of the production Stanislav Moša enabled his cast to engage in some great character acting. One can see that the actors trust the piece, that they identify with the life stories and thus can demonstrate the inner message of the work. Theatregoers can look forward to some very interesting performances. (…) It is an experience for spectators to observe how the actors have lightened up the message of the piece with their powerful singing. (…) It turned out great for the production that the creators didn´t use the big musical stage for the performance. Instead, everything takes place at the chamber-scale Drama Theatre, which makes the message of the show more concentrated, intimate and impressive. (…) Rent is a high-quality, attractive production.

(…) Brno City Theatre’s ensemble presented the rock opera Rent on 3rd and 4th November in a new translation. (…) Stanislav Moša wasn´t afraid to give the main role of Mimi Marques, a dancer who is addicted to heroin and suffering from AIDS, to Alžběta Trembecká, a fresh graduate from the Janáček Academy of Music and Performing Arts. She rewarded him with an excellent singing and acting performance. (…) Her partner was Kristian Pekar in the role of Roger Davis, a musician with AIDS who constantly has doubts about himself and is always looking for the one and only song which will get everyone singing (…) Mark Cohen is the spiritus agens, a film maker who is creating a document about their lives. He’s also Davis´s friend and housemate, and he often comments on the plot and propels it onwards. He is played by Daniel Rymeš, with no alternate actors. (…) The homosexual IT teacher Tom Collins is played very convincingly by Igor Ondříček, while Aleš Slanina excels in the role of his friend, the transvestite Angel. (..) His performance is fantastic, his dancing exposé is unforgettable. Hana Holišová is similarly great in the role of a bisexual street artist. (… ) She fills the stage with her presence, acting and singing with panache and showing just how well she can express the nuances of anger and desire. (…) Rent is a musical with a deep philosophical context, exceptionally good music and an involving story. It is a play about freedom, tolerance, happiness and sadness, losses and victories. (…) 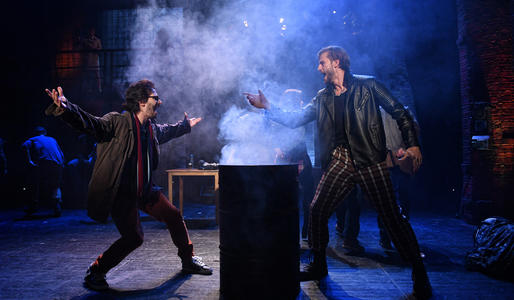 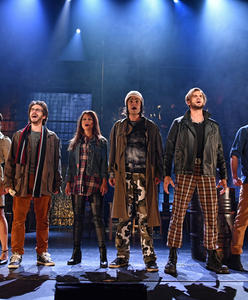 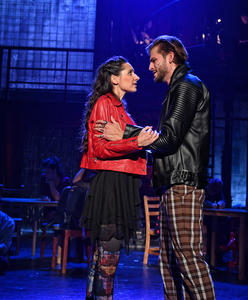 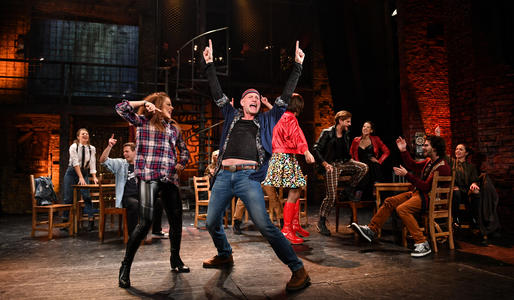 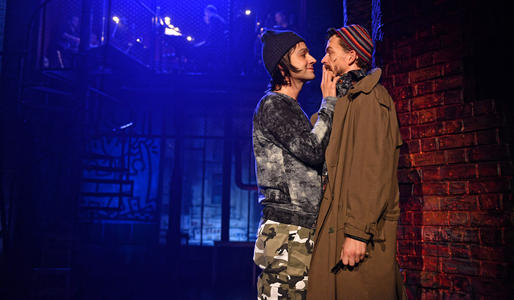 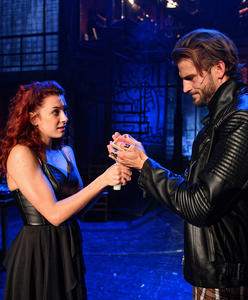 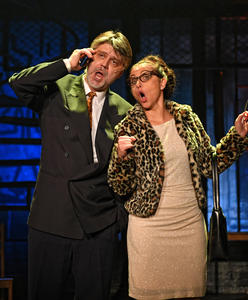 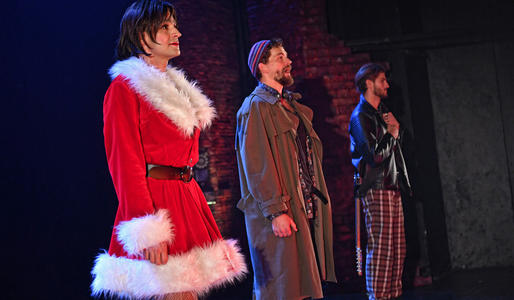 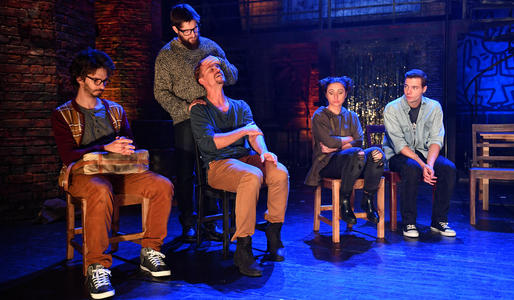 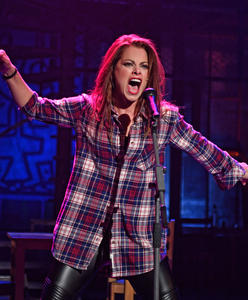 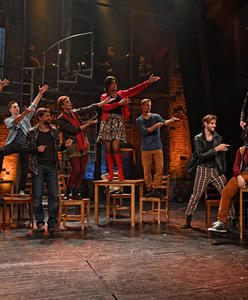 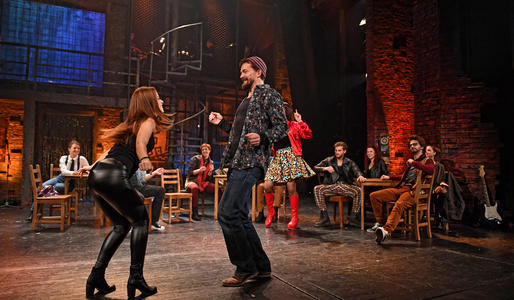