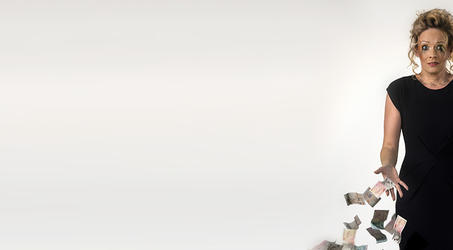 Alan Ayckbourn´s drama had its premiere at London´s National Theatre in 1987, gaining the Evening Standard Award for the best play of the year. Sir Alan Ayckbourn is one of the most prolific English authors, having penned over seventy dramas, more than half of which saw their premiere at London’s West End and also received many important awards there. The dynamic, sharp comedy A Small Family Business takes place during one autumn week in the lives of the family of businessman Jack McCracken, who is determined to stick to his strict moral principles despite the corruption in the world surrounding him. However, this doesn’t last long. He has just become the boss of his father-in-law’s company, and as he slowly starts to investigate the real state of affairs at the firm he encounters everything he has so far rejected. He is forced to try to keep certain damaging materials secret and finds out at the same time that his seemingly virtuous and decent family is full of thieves and adulterers, and that with them personal interests and business take precedence over moral principles. Despite the era of its creation, the play is still topical, which is also confirmed by the fact that it returned to the National Theatre in London last year with great success. Ayckbourn perfectly combines humour with satirical observation of the world, offering an astounding probe into family relationships and delivering a comic plot which culminates in a surprising and chilling ending.

(…) Within a small space, the author manages to capture a gradual shift in attitudes which even the main protagonist himself doesn´t realize. At the same time, he cleverly depicts the personalities of a great number of characters as they appear in rapid succession. (...)  Petr Gazdík is the director of this successful production, which is perhaps mainly a black comedy but incorporates other genres. The whole ensemble deserves praise. The greatest opportunity was offered by the central role, played successfully by Viktor Skála. Alena Antalová was convincing as his wife, who finds herself in a situation where modesty and honesty is being cast into doubt through comparison with the lightness of a life of luxury. Kateřina Fialová´s Samantha accurately depicted the behaviour oft-exhibited by some of today’s youth with confident arrogance. The stage (by Emil Konečný) totally fills all available space with the lavishly equipped rooms of a two-storey house. The set enables events to take place in parallel, providing simultaneous insight into what´s going on within several households. The live music used to underline the plot is interesting and effective. The potency of this device was strengthened by the placement of the musician (Alžběta Poukarová or Iva Kalusová) on a raised area in the middle of the stage. It made for an impressive sight when lit up during each musical number. (...)

HEROES AND VILLAINS, ALL IN ONE FAMILY

(…) At the weekend before Easter, Brno City Theatre staged the currently topical comedy A Small Family Business, which is a bit of a satire and something of a farce by British author Alan Ayckbourn. (...) The owner of a prospering company is going senile (Ladislav Kolář) and so entrusts his family furniture company to his completely honest, fair and incorruptible son-in-law Jack McCracken (Viktor Skála). This philanthropist and all-round good sort soon finds out that everybody around him steals. His daughter takes small things worth two pounds from a shop, while his wife purloins office supplies from the company. Others divert money in a greater scale, and it need not be spelled out whose material well-being is benefiting from this situation. His brother-in-law even entrusts a large part of the company to the competing Rivetti Italian mafia family. The quintet is completed in a Sicilian manner by Alan Novotný. (...) In the end, Jack is even forced to tolerate a murder, and foot the “cleaning bill”. Brno City Theatre’s greatest stars take part: Alena Antalová, Ivana Vaňková, Igor Ondříček, Jan Mazák (in the role of a spineless snoop), Johana Gazdíková, Evelína Studénková and Jakub Uličník.  Newer faces also appear, however – Sára Venclovská, Kateřina Marie Fialová and Jan Brožek, as well as the harpists Alžběta Poukarová and Iva Kalusová. A Small Family Business is a provocative production. (…)Many will pretend that it doesn´t concern them. They won´t even turn red. And those whose colour has somewhat faded are happy: It wasn´t like this in our day! But it was.

(…) Alan Ayckbourn focuses on family relationships, love and hate, problems with growing-up children… but also finds time for business problems, questions of honour, fallacies, visions and disillusionment. His comedies are always quite bitter. In fact, they make us laugh at ourselves, at our weaknesses and afflictions. This play, which was directed by Petr Gazdík and performed at Brno City Theatre, is one of such works. (...) The actors were well-chosen. Alena Antalová in the role of Poppy tries in vain to keep the family calm and relaxed, with lines that are both beautifully truthful and full of anxiety. As her husband Jack, Viktor Skála is in such an emotional state that he seems to be teetering on the edge of a heart attack all the way through the production from beginning to end. Skála acts at a great pace. Right from the beginning, he sets the level of his performance very high and one cannot imagine him capable of expressing more emotion. But Jack just keeps cranking it up: on the occasions when he falls silent the result is electrifying tension. Even when the conflicts get serious, such moments can put malicious smiles on the spectators’ faces. People are like this - someone else´s misfortune can make them smile. Igor Ondříček is John´s brother, one of those cunning people who are able to slyly dodge and weave their way out of any difficulty, if it’s at all possible. But it isn´t possible forever. Ondříček’s acting is just as comically cunning as the life of the man he plays. It is a pleasure to watch. There are also two sisters, caring Poppy’s daughters. One, Samantha, is a terrible post-adolescent girl that you would sometimes really like to slap. Kateřina Marie Fialová plays her very convincingly, including her contempt for everyone even when she is unhappy. And then there is the older sister (Johana Gazdíková), the wiser one, who is also a caring mother. (...) One of the very nice characters is the owner of the family business, Ken, played with visible enjoyment by Ladislav Kolář.   His “senior moments” of memory failure are charming. Again, it was something one shouldn´t really laugh about. But the successful writer of comedies as well as the director knows what kind of spectators we are, and such malice is typical of us, even if we aren´t happy to admit it. The other characters in this play, whether it’s ingratiating private detective Jan Mazák, Ivana Vaňková as an experienced lady, Cliff´s wife as well as a quite impressive sexy lover, the inconspicuous Roy played by Jan Brožek, or Yvonne (Sára Venclovská), all contributed via their everyday activities to the humour of the production. Things seemed to be proceeding in a more or less normal and logical fashion while actually heading for disaster with mile-long strides. (...) 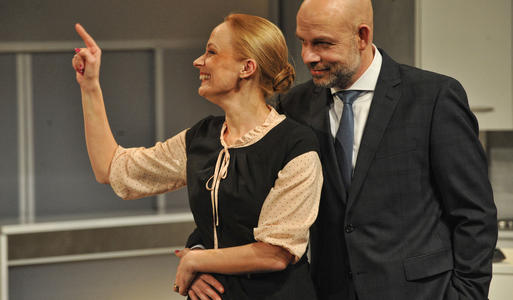 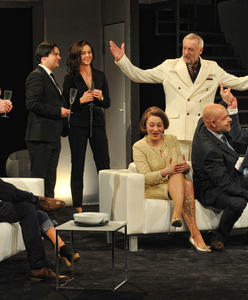 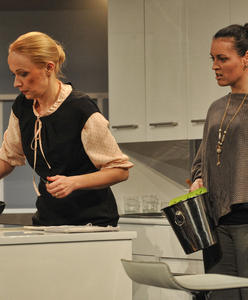 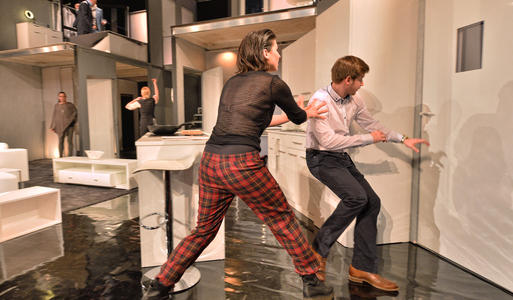 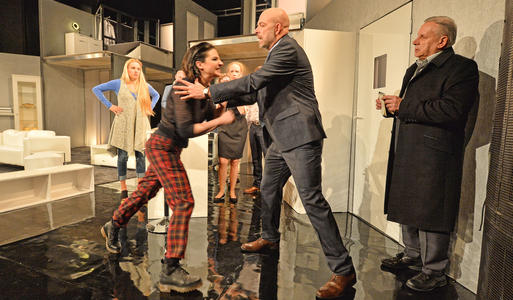 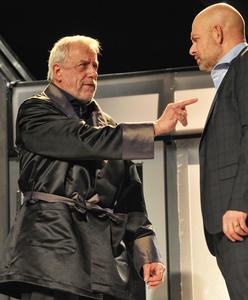 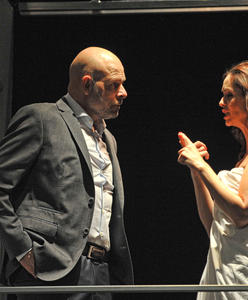 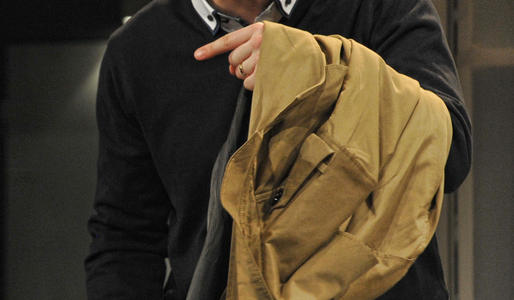 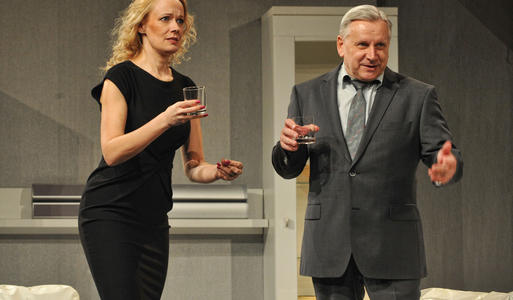 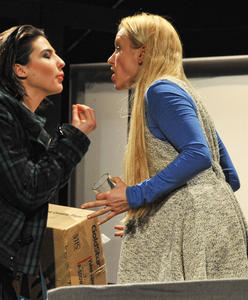 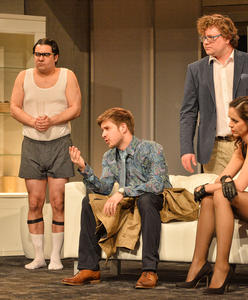 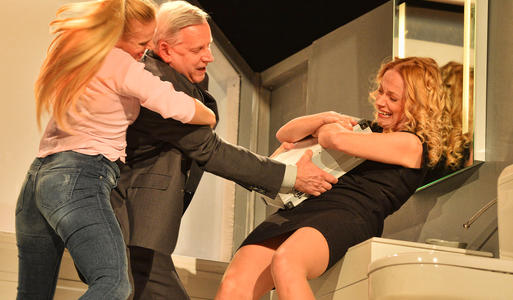