The Gospel about Mary 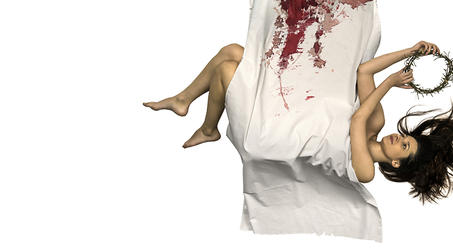 This Hungarian rock opera from 1991 tells the well-known story about the birth, life and death of Jesus Christ from an unusual viewpoint. Mary, Jesus´ mother, takes centre stage here. The topic is the personal pain and suffering she feels from her son’s difficult fate, but also her endless motherly love and dedication. In 1992 the piece was shown on the New Stage in Bratislava under the direction of Jozef Bednárik; it met with phenomenal success, having two hundred and fifty repeats, and the production thus marked the beginning of a glorious era for musicals in Czechoslovakia. Since that time, The Gospel According to Mary, which features beautiful melodies in addition to its immortal story, has been performed in Germany, Switzerland, Austria, Italy and Iceland, and now it has finally also reached our Music Theatre.

(...) In Brno, this Hungarian rock opera is performed with a live orchestra for the first time (the instrumentation and requisite materials are the work of Karel Cón), which significantly improves the impression one has from the music. The same is true of the great sound design (Milan Vorlíček). Brno City Theatre have once again made use of the advanced technology at their command to reinforce the rock elements in the music, which after all are the foundation stones of such an opera, though The Gospel of Mary certainly doesn´t make do only with them. László Tolcsvay is a multi-genre composer, and great solo musical arias and classical music pieces can also be heard in his rock opera. High demands are placed on the actors in the main roles as far as singing is concerned. (...) The narrator, John the Evangelist, almost never leaves the stage: he starts the story, leads us through it, pities and admires Mary, and listens keenly to Jesus´s sermons. It is thus absolutely necessary to cast this character right, and Stanislav Slovák has managed it, presenting Petr Štěpán in the role at the premiere - an excellent choice. Štěpán rules the stage with his acting abilities even in the moments when he is seconded by numerous others, he is an attentive listener as well as engaging storyteller, and his singing is also top notch. (...)

THE GOSPEL ACCORDING TO THE VIRGIN MARY: A ROCK OPERA ABOUT MARY THE MOTHER

(…) As far as the musical genre is concerned, the production rides on waves of rock, jazz rock  and pop, serving up a wild mix of beautiful, purely emotive opera songs backed by sharp rock melodies. (...) In places, prayers set to music can be heard, along with passages reminiscent of folk hymns. These moments are some of the strongest points of the production. (...) Actresses Kristína Vrecková (Young Mary) and Martina Severová (Mary) manage to deal quite well with even the most demanding operatic numbers, and deliver great singing performances. As far as the male protagonists are concerned, Dušan Vitázek stands out the most as the narrator, John. His John sings confidently, and his voice is also the one most often heard throughout the production. (...)

JESUS´S STORY THROUGH THE EYES OF HIS MOTHER

(…) Jaroslav Milfajt´s stage, composed of a staircase and floor located on a turntable, seems simple at first sight, though it turns out to be varied enough. The costumes, whose author is Andrea Kučerová, aren´t complex in any way either, but they combine historicizing elements with modern clothing. (...) David Kachlíř´s lighting direction is unobtrusive yet highly effective. (...) The author of the music is László Tolcsvay. He is a multi-genre composer, which can be heard in the Brno musical. We can find there simple songs which have the potential to become hits (Jesus, Teach Us Love), touching arias, and sections with classical music (Hail, Mary sung by a choir of Archangels). There’s also a rock hit, which is enhanced by Jakub Zedníček´s “raspy” voice (as Herod). Everyone can find something to like. (...) Mikuláš Bryan´s fine translation is also definitely worth mentioning, being easy to understand yet not lacking in poetry. (...)

THE GOSPEL OF MARY

(…)  Stano Slovák has successfully settled into his new position as an accomplished director. (...) His collaboration with choreographer Michal Matěj has borne fruit, particularly when it comes to crowd scenes. (...) David Kachlíř´s lighting design is deserving of attention, as it provided real magic, including fires, and mainly featured the clever use of laser effects (particularly the scenes with the Resurrection of Jesus and the Assumption of the Virgin Mary). The projected images are not only appropriate but also distinctly support the plot (particularly when the pages of old writing, probably the Gospel, were projected). Milan Vorlíček, the sound designer, combined the sound of the orchestra with singing via wireless microphones well, spicing up the performance with a soundscape that is pleasant to the ear. It must be emphasized that you won´t find another theatre in the Czech Republic which can offer such amazing technical facilities. (...) Just as with the technical side of things, the whole acting ensemble of Brno City Theatre also delivers a consistently perfect performance. Pride as well as respect for their theatre radiates from the cast (...) Petr Štěpán´s John acts as a guide through the story. (...) The scene featuring a duet with Jesus (Jozef Hruškoci) and his charity is very memorable. Joseph (Jiří Mach) is a stable element of the Holy Family, while Andrea Zelová as Young Mary keeps things feminine but simple. She couldn´t be any different in a story about Jesus. Calmness and peace radiates from her. (...)

(…) The authors have constructed the libretto in a tried-and-tested manner, starting with the crucifixion and a beautiful solo by Mary as she holds her dead son in her arms. The story that follows is a retrospective tale about Jesus, and Mary’s fears for him. She flees Herod’s massacre with her husband, the carpenter Joseph. Mary keeps watching Jesus’ actions and is concerned about him, just as all mothers worry about their sons.  (...) There are no grand visual effects in Stanislav Slovák´s production, as the director has concentrated on the strong experience to be gained from the detailed portrayal of the characters and their life stories, turning away from an emphasis on decorations and effects. Jaroslav Milfajt´s set is divided up in a relatively complex manner and features a turntable together with lighting and video projections by David Kachlíř and Petr Hloušek. These elements work together to suggest the presence of buildings from biblical times mixed with the metal structures of what could perhaps be a deserted factory. (...) Characters emerge and fade in an emotive chiaroscuro where everything works purposefully to create the atmosphere of a story which, despite its great age, retains its relevance in every era. Whatever the time, place or situation in human history, mothers have always suffered, and suffer still. (...) 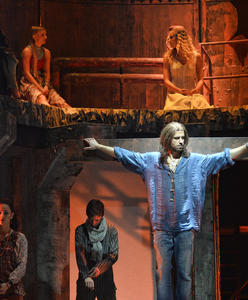 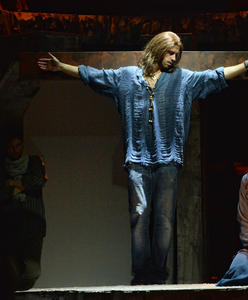 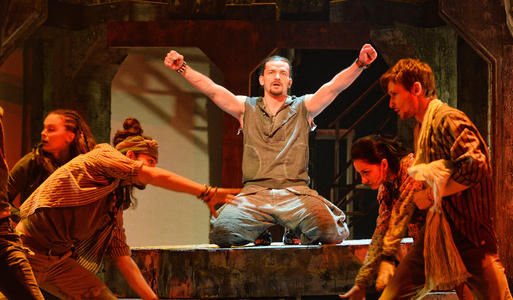 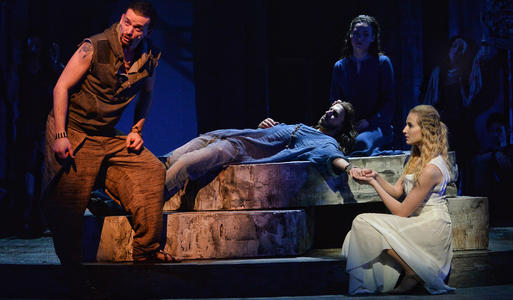 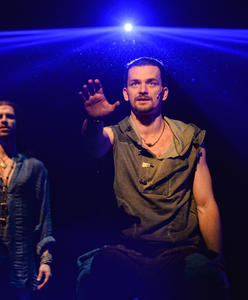 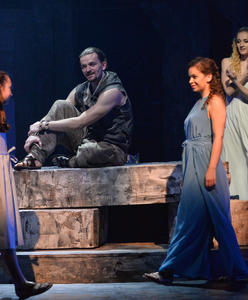 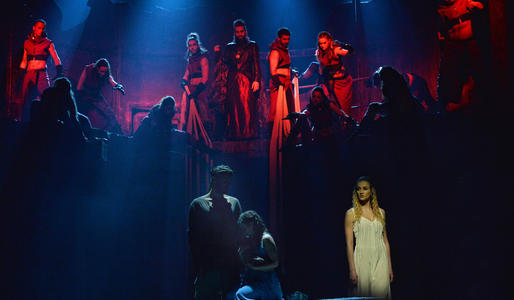 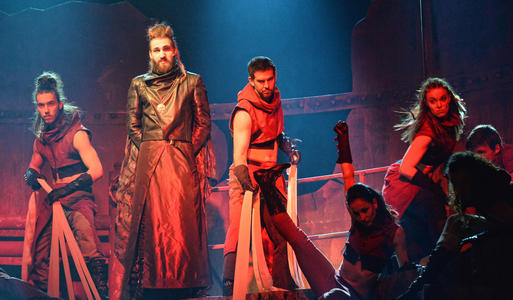 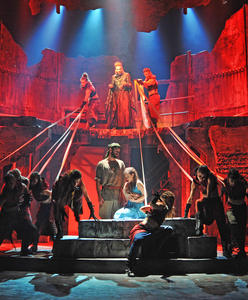 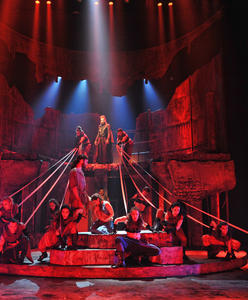 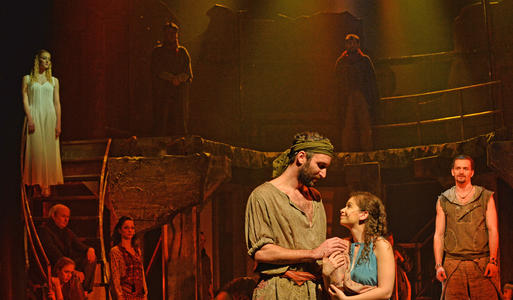