a musical based on the tales and legends of Brno

“The bells ring midday at eleven/ and a crocodile is called a dragon / but not everything is completely upside down here / as cabbage can be bought from the Cabbage Market” – this is the gist of what is sung in the most recent work by the tried-and-tested authorial trio Stanislav Slovák – Jan Šotkovský – Petr Štěpán, the operetta Mendel, or the Mutiny of Peas. Alongside that production the team also prepared other original pieces for Brno City Theatre’s summer season at the Bishop´s Courtyard – Baron Trenck and Cyril and Methodius.  All of these works had in common their relationship to local issues, respect for genius loci and the desire to make the most of the unique atmosphere and historic features of the beautiful environment offered by the Bishop´s Courtyard. The musical Brno’s Wheel (which was again created as a team effort in collaboration with the author of the music for Baron Trenck and Mendel, Karel Cón) refers once more to historic and local events,  and moreover, does so twice – it presents a selected few of the best known of Brno’s tales (including the titular story about a wheelwright, Birck, who apparently managed to cut down a tree, make a wheel out of it and roll it all the way to distant Brno, all in one day)  while simultaneously concerning the institution which the Bishop´s Courtyard is  part of. The Moravian Museum is actually celebrating 200 years of its existence this year (2016). And it is exactly the museum building at the Cabbage Market that’s the place which hides at least one secret concerning Brno’s tales and legends after closing time in the evening in our story... We are performing this production under the direction of one of the co-authors, Stano Slovák, with a live orchestra.

Mendel, Edison and the Pospíšil brothers, Nataša Gollová and also the wheelwright Birk who, as the tale says, managed to cut down a tree, make a wheel out of it and roll it from Lednice to Brno all in one day: all these famous names are caught up in the events of the new musical Brno´s Wheel. (…) The production, which is inspired by Brno’s history, is an entertaining musical fairy tale for adults that makes great light summer entertainment and is overflowing with parodic sketches and pop-culture references. The authorial trio Stanislav Slovák, Jan Šotkovský and Petr Štěpán has already written and produced a great deal of varied titles for Brno City Theatre. (…) This time, the trio were aided by composer Karel Cón, who managed, with the help of a live orchestra, to transform the contents of the script into music redolent with parody, wit and nonchalant detachment. (…) The wittily-written characters that are the thieves searching for the Věstonice Venus, Jakub Uličník and Ondřej Studénka, are something of a cross between the illicit moneychangers of the past and today’s urban losers. The main role of Professor Cajthaml was played well by Michal Isteník, who coped admirably with the many tricky aspects of this mainly positive character. The story of the show concerning Birk´s wheel and Edison’s mysterious machine is all made up, though it is based on real facts. It plays with the imagination and, to an extent, with the spectators too. If theatregoers accept the game and keep on top of things, they can expect an entertaining evening with an original story.

Brno´s Wheel, the new musical comedy from Brno City Theatre, has rolled into the Bishop´s Courtyard. The title is yet another of the theatre’s self-penned contributions to their series of local open air performances that make use of the magic atmosphere of this complex of historical buildings with the cathedral rising behind it. An entertaining charade, it combines historic facts and local legends with music and a fantastic fairy tale story. (…) The name of the performance refers to a famous tale about a wheelwright called Birk who once upon a time in 1635 managed to cut down a tree, fashion a wheel from it and roll that wheel from Lednice to Brno, all in one day. This guy is also one of the main characters, though the aforementioned wheel turns out to be something completely different in the end, namely the code name for a secret machine constructed in the 19th century. (…) One of the main members of the cast of real and legendary characters is Thomas Alva Edison, who comes to Brno to visit his friend, Professor Cajthaml. And if this isn´t enough, the show features three children as the main heroes (the actress Alena Antalová´s children) and a trio of mysterious museum guards who are actually ethereal beings. (…) The musical part of the story was created by Karel Cón. Spectators will be treated to dozens of songs performed by a live chamber orchestra (9 musicians) seated in the picturesque arcade above their heads. Because the script itself is full of parodic references to many things (acting, theatre practice, operetta and pop clichés, etc.), Cón´s music does something similar. (…)The main role of Professor Cajthaml was successfully played by Michal Isteník, who isn’t shy about going all out at times to ensure this outdoor spectacle has the required amount of oomph. When he is being tortured by two thieves who demand that he “sings”, or in other words reveals details regarding a certain precious exhibit, he reacts to this with the comment that everyone always tells him to shut the hell up when he tries singing. The script is full of such in-jokes. (…) For that matter, all of the Brno jokes work well in this production. (…) 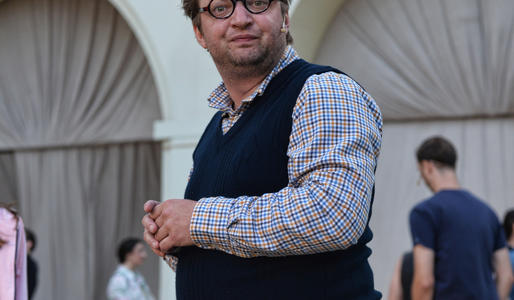 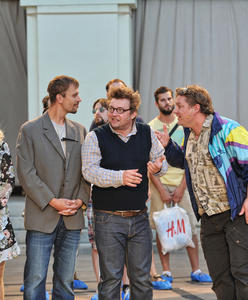 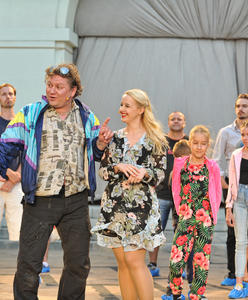 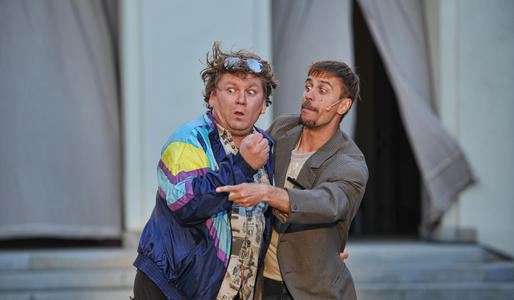 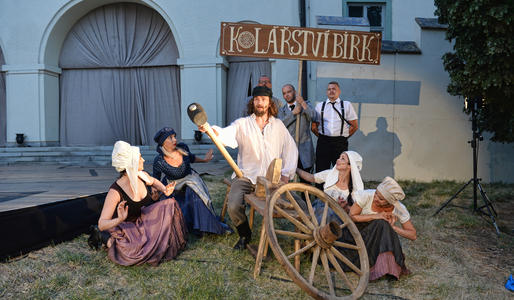 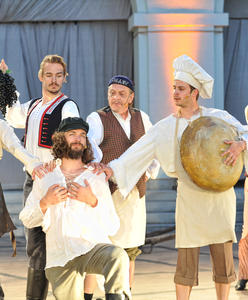 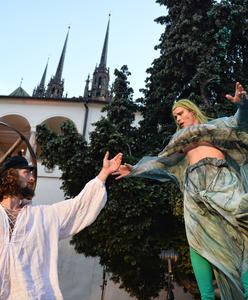 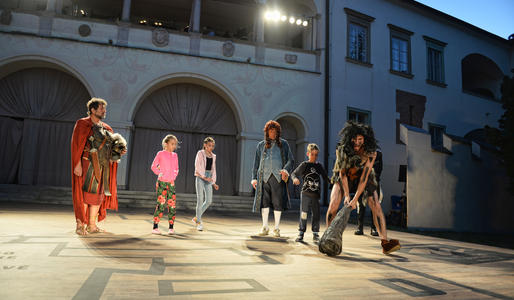 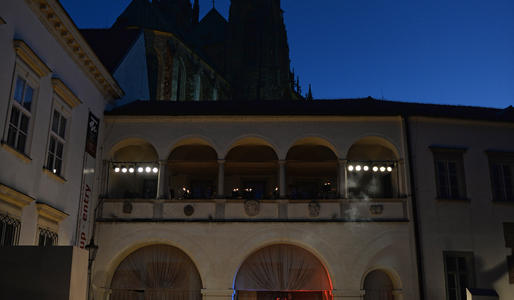 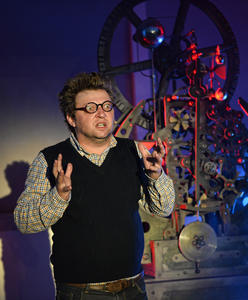 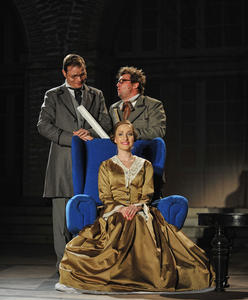 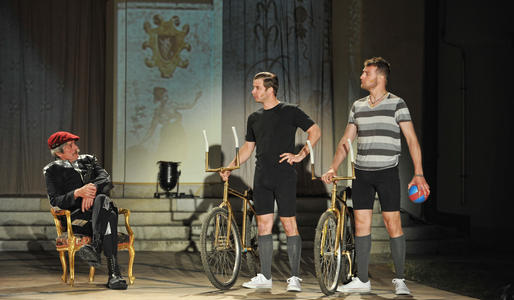