WOMEN ON THE VERGE OF A NERVOUS BREAKDOWN

Composer David Yazbek, whose immensely successful musical The Full Monty! took the whole world by storm and has been shown at our theatre to great acclaim for several seasons already, likes to base his musicals on top film comedies. This time he chose, together with librettist Jeffrey Lane, to adapt well-known Spanish director Pedro Amodóvar’s famous, adorably crazy 1987 comedy with an extremely long name: Women on the Verge of a Nervous Breakdown. The Broadway premiere of the musical version took place in 2010 and a significantly altered version also conquered London’s West End last year.

The story of voice actress Pepa and her friends and acquaintances takes place in the streets of Madrid, a city pulsing with life, breakneck development, art and passion, at the end of the 1980s. Right on the day when it eventually becomes apparent to Pepa that she is pregnant, her lover Iván suddenly leaves her. However, before she manages to get through to him to ask him to explain this incomprehensible act, she meets his ex-wife Lucía, who has just been released from a mental hospital after twenty years, as well as his son together with his fiancée. Her closest friend, a model called Candela, calls for help; she has just found out that her new lover Malik is a wanted Shiite terrorist... Lucía is meeting a feminist lawyer named Paulína to prepare a court case during which Iván will be held responsible for leaving her twenty years ago. And Pepa, with the help of a good-hearted taxi driver, just keeps on looking for a solution to all the problems suddenly appearing all around Madrid...

The story of this chamber musical combines the elements of Feydeau-style farce with Hispanic emotions and temperament. This also evident in the exciting jazz-rock style of its music, which is inspired by Spanish genres and rhythms, for example flamenco.

WOMEN ARE COLLAPSING, BUT THE SPECTATORS ARE HAPPY

(…) Films are sometimes based on theatre plays, and vice versa – stories which originated as films end up being performed on stage. There are increasingly many of them, and one of the latest is Women on the Verge of a Nervous Breakdown at Brno City Theatre. Scriptwriter Jeffrey Lane and composer David Yazbek have created a great musical based on the successful 1988 film of the same name by Pedro Almodóvar. The film director also cooperated in the creation of the theatre version with the librettist. While the musical is different from the film, both versions are crazy and complex comedies. The main heroine, Pepa, has been cheated on by her partner. The musical follows her as she experiences a spicy story full of Spanish temperament during a single day in Madrid in the late 1980s. Lucie Bergerová deserves great praise for her singing, speaking and movement in this role. Markéta Sedláčková clearly enjoys playing jealous Lucie, and her comedy talent and singing skills are showcased well in the role. (…) Apart from the two actresses mentioned, you will also see Petr Štěpán as the unfaithful husband, Iván, and Dušan Vitázek in the role of a taxi driver. As far as other roles are concerned, you will enjoy the art and beautiful bodies of either Andrea Zelová or Sára Milfajtová as the model Candela, and Mária Lalková is well suited for the role of the lawyer, Paulina. The distinct character of a matador, who connects the whole musical together through dance, is played by Hana Vašáková. (…) Theatregoers can look forward to a story about the interwoven relationships between the main characters. There’s a cheated wife and a lover, an alpha male, and the end even features a foiled terrorist, who is a humorous character here. The comedy plot is amplified when several of those present unknowingly drink gazpacho spiked with analgesics and fall asleep. (…)

WOMEN ON THE VERGE OF A NERVOUS BREAKDOWN

(…)Imagine a musical composed of a crazy mix of relationships and situations. Surprisingly, it is possible. (…) Stanislav Slovák was the director. (…) The combination of dramaturge Jan Šotkovský, conductor Karel Cón and scenographer Jaroslav Milfajt makes up what is already a highly-coordinated team that works on the majority of Slovák´s productions. The simple, variable set has to be able to cope with rapid scene changes. (…) And so we find ourselves inside at one moment, and suddenly in the streets of Madrid at the next, with two taxis engaged in a car chase. Even this can be managed by a well-crafted production, and even beautifully, and with humour. The musical’s actors deserve special attention. We are already used to the fact that they are all perfect singers at Brno City Theatre, with clear, distinct voices, and confident mastery of the art of singing with a wireless microphone. Moreover, emphasis is placed on dramatic acting, which is very important in a conversational comedy. The main character, internally unsettled Pepa, is played by Lucie Bergerová. (…) Pepa gets the most attention, and the crazy way she falls in love with the mysterious Iván makes one feel sorry for her, as well as laugh. Iván´s rejected wife, played by Markéta Sedláčková, enjoys her role. (…) And Andrea Zelová’s Candela is an explosion of beautiful energy, rapid-fire speech and plenty of gestures, simply a quintessential comic character. One very nicely-handled relationship is that of Carlos and Marisa, a chaste couple played by Jan Brožek and Eliška Skálová. (…) Well, and all these relationships are crowned by the main male character around whom everything is revolving, i.e. the mysterious and well-loved womanizer Iván played by Petr Štěpán in a somewhat mysterious fashion. He is a taciturn alpha male, which makes it still funnier to watch everything that’s going on around him. The director also greatly enjoyed playing with communication over the telephone. This is actually dictated to him by the libretto of the musical, but the many witty details involved made the spectators laugh out loud. Well, and then Hana Vašáková stars in the production as a matador. Without words, but in smartly choreographed appearances, she creates short divisions in the show that remind one of the atmosphere of a bullfight. And isn´t it, in fact, a bullfight which all those hit by Cupid’s arrow display? There is also one more character, someone who accompanies the spectators throughout the show, as some kind of musical presenter of the story. The singing, guitar playing Dušan Vitázek certainly gives the production an extra boost of energy. (…)

(…) The musical Women on the Verge of a Nervous Breakdown is different from Amodóvar´s film. However, the essence of the work remains. A frustrated, cheated woman who is, let’s say, a bit on the foolish side, ends up foiling a terrorist plot while acting out of a desire for revenge on the lover of her alpha male, Iván, who has got her pregnant and is cheating on her as well. As a result, she ends up famous, and incurably so. The interlocking relationships are just like something from real life as she finds out that her lawyer is another stronghold conquered by her fickle husband. And to make things even more complex, the son also experiences his first romantic upset when his somewhat cold fiancée drinks mixed carpaccio flavoured with analgesics by mistake and a passionate but somewhat flighty model comes into his life as if to take her place. (…) The piece is fresh, light, witty and well adapted for the stage by the experienced Stanislav Slovák with the aid of Zdeněk Bartoš´s translation and Michal Matěj´s choreography. A trip to Brno City Theatre means encountering the greatest cluster of Thalia award winners in the Czech Republic: in Women on the Verge of a Nervous Breakdown, you will enjoy Markéta Sedláčková´s display of artistry as the jealous one, Petr Štěpán´s turn as the roguish husband, Lucie Bergerová as the cheated lover and Dušan Vitázek as the taxi driver. (…) 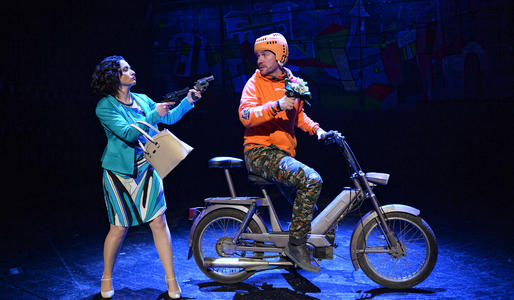 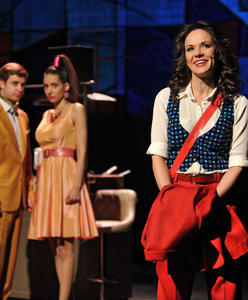 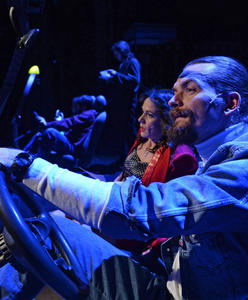 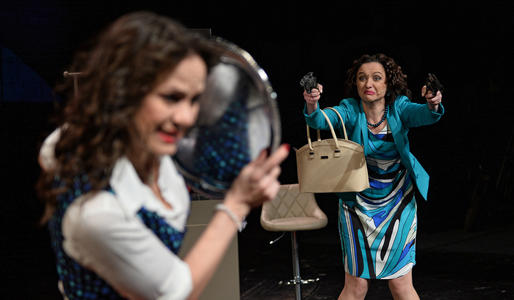 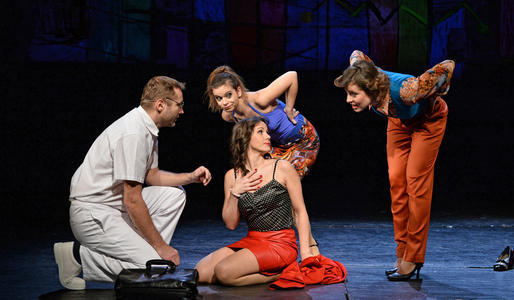 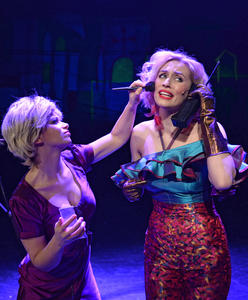 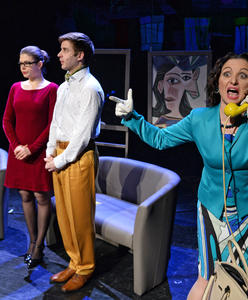 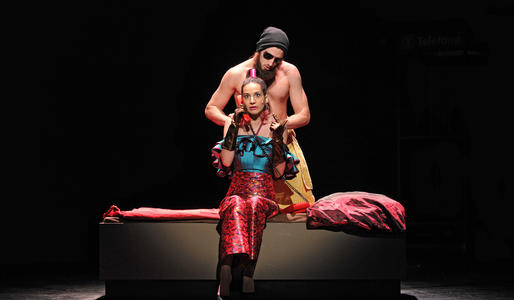 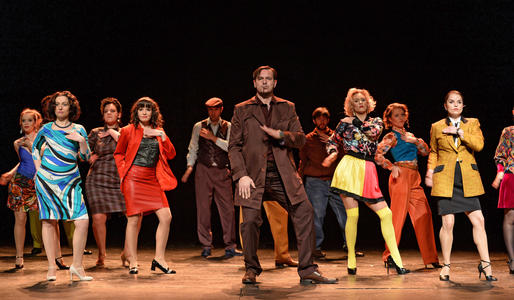 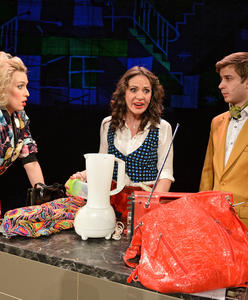 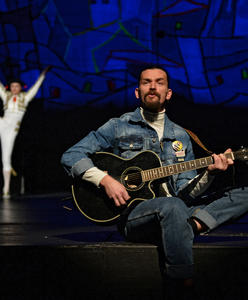 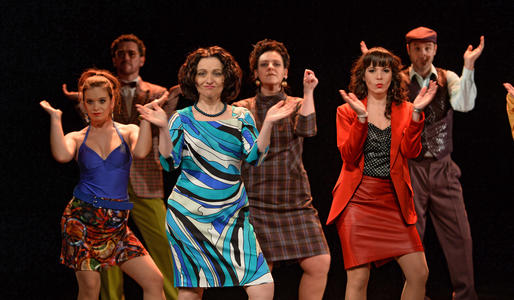