Few musicals have caused a worldwide stir as the musical Mamma Mia!, which is packed with immortal hits from the Swedish band ABBA. It is one of those “jukebox musicals” which are made by creating a new and original story around already existing songs – the most popular, of course. It’s a method whose results aren’t always greeted with great enthusiasm, but the author of the script, Catherina Johnson, was very successful in this case. The experienced British playwright has managed to write an entertaining and involving story and make the songs into an inseparable and natural part of the whole. The musical had its premiere back in 1999 at the Prince Edward Theatre in London, and was nominated for four Laurence Olivier Awards and subsequently also for five of the USA’s Tony Awards when it was successfully brought to Broadway in 2001. Since then it has been performed literally all over the world, and it was also adapted into a famous musical film starring Meryl Streep, Pierce Brosnan, Colin Firth and others in 2008. The movie is a true phenomenon, and so it’s no surprise that a sequel was made in 2018. The new film, Mamma Mia! Here We Go Again, deals with what happened before the first part. Now our spectators can also look forward to autumn 2019, when this romantic story will finally come to the Brno City Theatre. It has a brisk comedy plot featuring the travails of twenty-year-old Sophie, who wishes on the day of her wedding to find out who her father is and so invites three potential suitors from her mother´s past to a picturesque Greek island. And so the new season at the Music Theatre will start with the wild rhythms of unforgettable hits such as Super Trouper, Dancing Queen, Money, Money, Money and The Winner Takes It All, all wrapped up in a blockbuster show directed by Petr Gazdík.

(…) Directed and arranged by the experienced Petr Gazdík, the popular jukebox musical Mamma Mia! stormed into the Music Theatre. (…) The simple, clever story in which the twenty-year-old Sophie tries to find out on the day of her wedding which of her mother’s three former lovers is her father, is ready for a professional and perfect production in the Brno City Theatre. Emil Konečný has evoked the sunny atmosphere of a Greek island mostly by moving houses, Eliška Ondračková Lupačová boosted it with her pastel costumes. (…) The result is a good and easy hit. (…)

The Mamma Mia! musical has been very successful with the viewers in the Brno City Theatre and is sold out for a long time to come; the popular ABBA songs are simply attractive. (…) The theatre tried to negotiate for the songs to remain in the original versions, which has unfortunately not been allowed by the licence terms. The copyright holders explain they wish for the audience to hear the songs in their language to understand the story completely. (…) The stage design of Emil Konečný is great, the image of a summer Greek island is more convincing than the London original. The costumes of Eliška Ondráčková Lupačová are a success as well. (…) Ivana Vaňková is brilliant as Donna, in her interpretation, Donna is a strong woman, much less mad than usual. In singing, Vaňková gradually steps it up to dazzle with the central Donna’s theme song The Winner Takes It All. Her companions Rosie and Tanya, performed by Lucie Bergerová and Johana Gazdíková, are very amusing. (…) Robert Jícha in the role of Harry definitely stands out from the trio of potential fathers, not only thanks to his comic talent but also to a brilliant singing act. (…)

MAMMA MIA WILL LIGHT IT UP!

You come to the theatre in a sort of normal, neutral mood, neither happy nor sad, a few worries and some joy, the usual. And then something wonderful, even miraculous happens because you are leaving the theatre satisfied, elated, laughing. All this thanks to a reunion – reunion with the songs of Abba and the great bunch from the Brno City Theatre. (…) The curtain goes up and three teenagers are exulting for joy of meeting each other on the stage. A bit later, three adult women are rejoicing, also because of a reunion. (…)

The stage is all singing and dancing and they got you. (…) If you weren’t stuck in the comfortable theatre chair, you would start tapping, swaying in the rhythm, waving your hands and dancing with them. (…) And the overall gaiety continues, as well as the rags and jokes, the group dances enjoyable and joyful choreographies, actors and actresses sing at the top of their voices, and very well. (…) The good mood in people could be cut up and passed along, there is an applause and a real show at the end. (…) The joy from the never ending parade stays with you all the way home and even after, I hope. (…)

MAMMA MIA! IN BRNO APPRECIATED MORE THAN THE FILM

The Mamma Mia! musical has been staged in the Music Theatre of the Brno City Theatre since Saturday 19 October and will probably stay for a long time, considering the enthusiastic reactions of the viewers and professional critics. (…) A musical theatre of the kind we have in Brno knows, of course, that the piece will be popular. (…) An asset of Mamma Mia! is a relatively simple and direct, yet quite humorous and even a slightly saucy story. The greatest attraction, of course, are the immortal hits of Swedish ABBA, which doesn’t exist anymore. (…) At the premiere, the eight main roles were played by Alena Antalová, Radka Coufalová, Pavla Vitázková, Igor Ondříček, Tomáš Sagher, Alan Novotný, Dagmar Křížová, and Jonáš Florián. They and the company played, sang and danced with great enthusiasm. I felt as if the viewers did not focus on an actress or a singer, her or him, but were taking it all in, the story and the characters of Sophie, mother and daughter, let alone the men and other actresses, singers and dancers. (…) The arranger and conductor Daniel Kyzlink (…) gave the piece a more modern sound. (…) The stage design by Emil Konečný works well, enhanced by the colour effects, and the choreographer Hana Kratochvilová has utilized the space with great imagination. She allows the ensemble to “let their hair down” in a beautiful final scene. The level of Mamma Mia! in Brno is very high, both artistically and technically. (…) 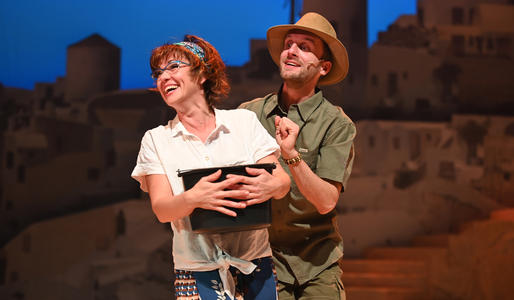 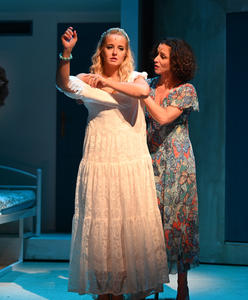 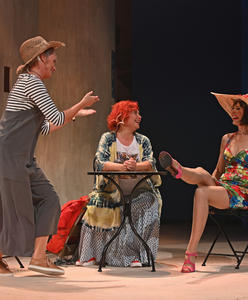 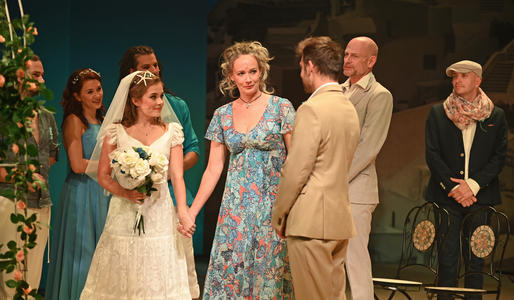 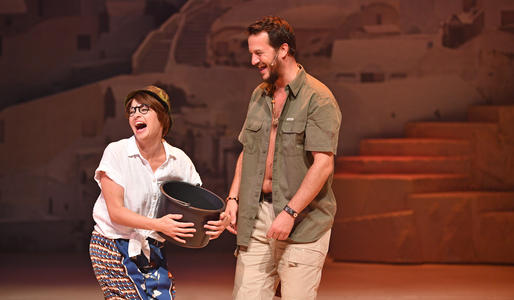 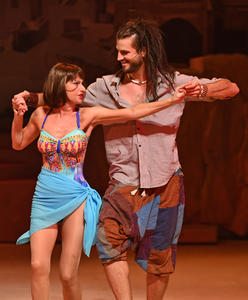 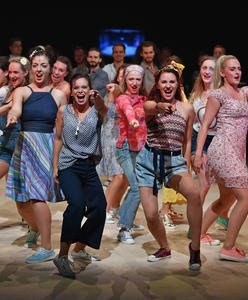 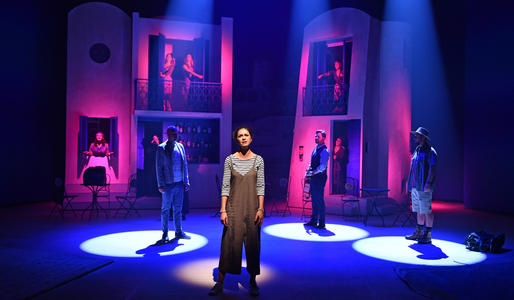 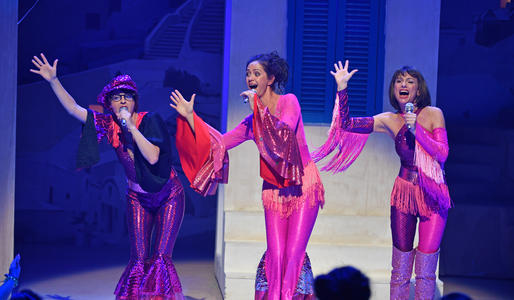 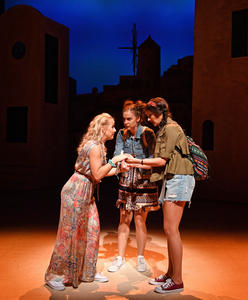 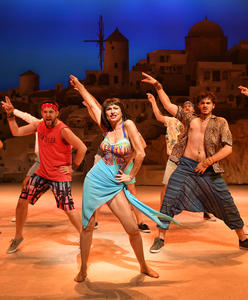 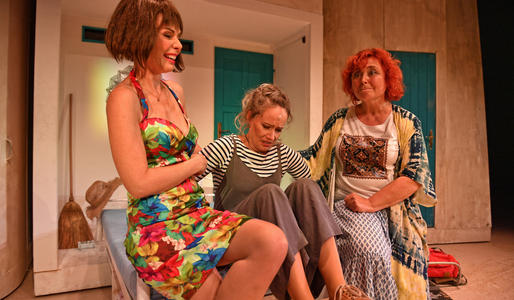