NAPOLEON, or The Alchemy of Luck

It is the year 1809. Napoleon Bonaparte is the ruler of a huge empire stretching from Koenigsberg to the Pyrenees, from Warsaw to Naples, from Antwerp to the mountains of the north-western Balkans, from Hamburg to the island of Corfu. He is, in short, the most powerful man in Europe. When in September that year he visits Brno for the second and final time in his life, it is currently occupied by his soldiers, and not long has passed since his July victory in a battle near Znojmo and the negotiation of an armistice that basically means the defeat of Austria. Napoleon is practically at the peak of his career. He certainly doesn’t want to miss out on holding a ceremonial parade with his army at the battlefield near Slavkov (Austerlitz), at the place where four years previously he had celebrated his greatest military victory.

Now let’s move forward to the year 1908, 99 years later. Lord Maurice Arnold de Forest, British politician, racing driver and owner of Veveří Castle, has invited his childhood friend Winston Churchill, the then British Minister for Trade, to his castle for the third time. Unlike the previous two occasions, this visit is special: Churchill is there with his wife Clementine on their honeymoon. Unfortunately, Clementine has reason for complaint – instead of devoting himself to his new wife, her husband is spending his time writing a book about Napoleon, in which he aims to provide a daring never-before-discovered explanation for the general’s epochal victories. Churchill has the feeling that it is exactly Napoleon’s lost speech to his soldiers from 1809 that holds the key to the “Napoleon Code”. However, when he wakes up one day at Veveří and discovers that Clementine has been kidnapped, young Winston has to start dealing with completely different problems altogether, and descend into the depths of Brno’s underworld…

The reality of Napoleon and Churchill’s connections with Brno inspired the team of authors, who have already taken several fun looks at Brno’s history and legends in the productions Baron Trenck, Mendel and Brno’s Wheel, to new acts of hedonistic Dumas-esque fable-spinning.  A carousel of unbelievable historical situations, some real, some imagined, will once again spin below the open sky and fill the captivating setting of the Bishop’s Courtyard with dance and song – and it will be a world premiere.

The Bishop´s Courtyard in Brno hosted the premiere of the play Napoleon, or The Alchemy of Luck

Under the direction of Stanislav Slovák, with Jaroslav Milfajt as the author of the stage design, Karel Cón´s music direction and Jan Šotkovský´s dramaturgy, the world premiere of a musical was created in which important personalities meet in Brno, in space and time, with a timeless concept and plenty of opportunities for fable-spinning.

The costume designer (Andrea Kučerová) should certainly be praised, with her depiction of Churchill´s supposed source of luck, the girl Fortuna (Alžběta Janíčková), who dances at the beginning of the musical and appears in his dreams. She was charming in her loose red dress, with her innocent and yet magical look, and with her dance she accentuated her femininity, elegance and inspiration for Churchill´s great deeds. The well-thought-out lighting composition with alternating displays of light, shadow or darkness completed the great impression from the performance.

Witty references to the relocation of Brno’s main railway station and the confused Chief of Police were greatly entertaining for the spectators, who confirmed this with sincere laughter and grateful clapping throughout the performance. This was impressive, especially at the end of the premiere, when the ovations just wouldn’t stop, and the audience called the performers back several times with their never-ending applause. The ladies were rightly rewarded with flowers, while the male actors received presents in the form of gift boxes.

The story mixes sharp satire, sad truth and exaggeration, real historical events and fictional stories, and characters that are so humorously caricatured that they become monsters in places.

Truth and myths about the happiness of the two main characters

“Learn to listen, you will learn how to rule,” said Solon, the Athenian lawmaker, 638-558 B.C. Napoleon listened little to his people, preferring his self-centeredness and the role of the dictator he was born to be, though he also listened to his second wife, the many-years-younger Marie-Louise of Habsburg Lorraine, an Austrian Archduchess who became Empress of France after her marriage to Napoleon I. “Thanks” to this woman and her beauty, but also her greed, he was driven to leave  Elba and embark on further wars before definitively ending up, partly due to the great exhaustion of his already thin army and his defeat at the Battle of Waterloo, on the island of St. Helena forever.

Yes, as history has shown many times, and not only with political leaders, it is true. This is fully illustrated by the French proverb Cherchez la femme, “look for the woman”, whose authorship is attributed to Cardinal de Richelieu as well as Alexandre Dumas the Elder.

Churchill´s beloved Clementine, on the other hand, who combined almost classical beauty and kindness, literally fulfils František Hrubín´s quote: “Every woman has the power to make the one she loves beautiful and kind.” Her kindness and wit, not just her charm, enchanted Winston Churchill so much that he not only took her as his wife, but also listened attentively to her opinions on his character or events around him. And he rightly recognized that her presence by his side was the real wellspring of happiness.

A varied art programme really suits the Bishop´s Courtyard. It is an extraordinary experience to see performances with the magnificent Cathedral of St. Peter and Paul as a backdrop.

The decorations of the Renaissance courtyard are also suitable for plays which were written specifically for this courtyard, such as the humorous Mutiny of Peas, which is about the life of the scientist Mendel; the epopee about Baron Trenck, the Pandur commander who ended up in prison at Špilberk Castle in Brno; and the stage version of the legend about “Brno’s wheel”. All of these are the work of Brno City Theatre actor Petr Štěpán, dramaturge Jan Šotkovský, actor and director Stanislav Slovák, plus the composer and band leader Karel Cón. This is because all the pieces by the authorial trio are chock-full of acting, dancing and singing. The content is always a very free and witty interpretation of specific historical events that are somehow related to Brno. For instance, in Baron Trenck the bandit has an affair with Maria Theresa herself. And once again, the authors’ latest “interpretation of history” is connected with Brno, or to be more exact with the visit to nearby Veveří Castle by what was then the future British prime minister Winston Churchill, who spent a few days there. Also, in this interpretation of history, the trio of “rascal authors” deal with events of international significance, and it’s a world premiere! Their production NAPOLEON or The Alchemy of Luck is, yet again, a successful and humorous interpretation of history associated with Brno.

Songs are always important in this type of piece. They were composed by Karel Cón and played live by the orchestra of Brno City Theatre on the gallery of the Renaissance building that forms part of the background of the stage. The inconspicuous but important alterations to that background by the stage designer Jaroslav Milfajt should be mentioned, as he incorporated several parts of the set into the structure. It may seem to spectators that they have always stood there – they fit right in with the Renaissance background style-wise.

Every year, the summer performances at the Bishop´s Courtyard are a theatrical holiday. But 2021 will be exceptional. After the pandemic and resulting “withdrawal symptoms”, every performance will be a feast of muses, as it was the premiere evening of the original play, Napoleon. 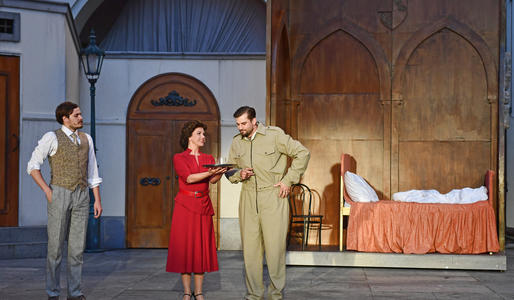 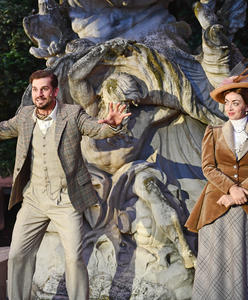 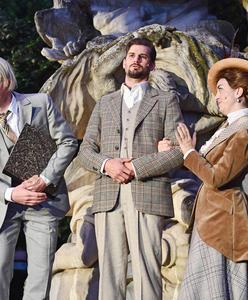 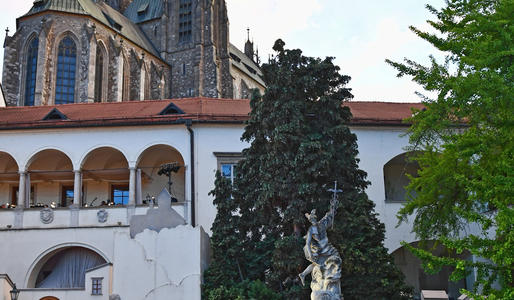 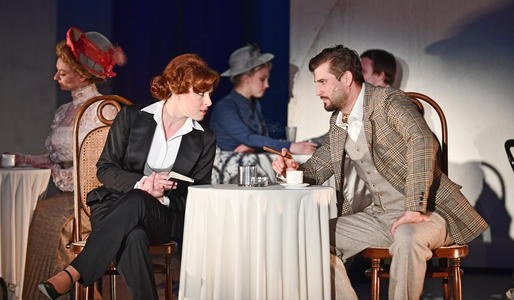 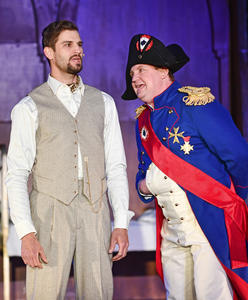 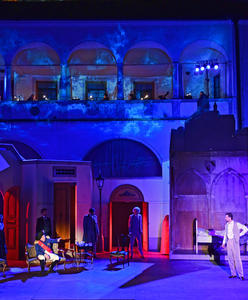 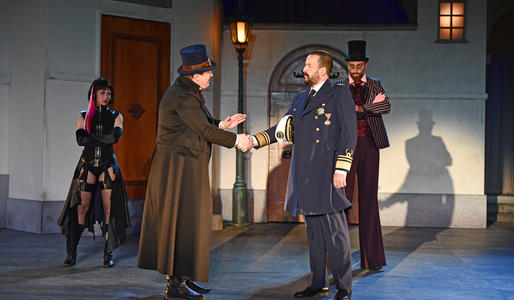 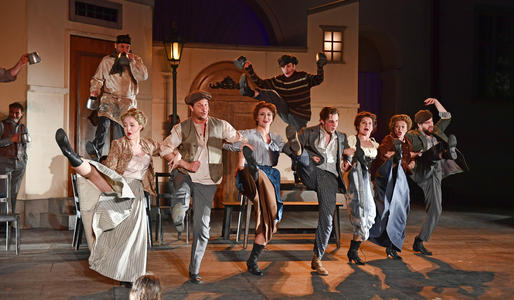 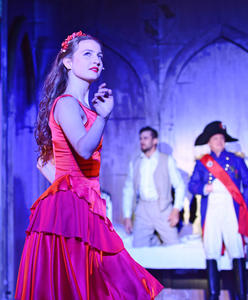 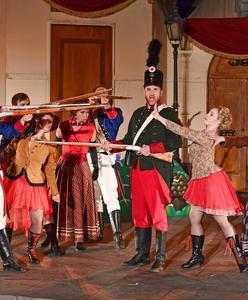 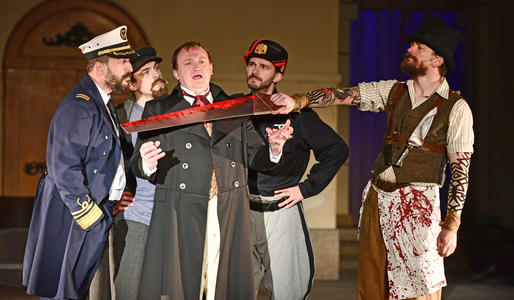