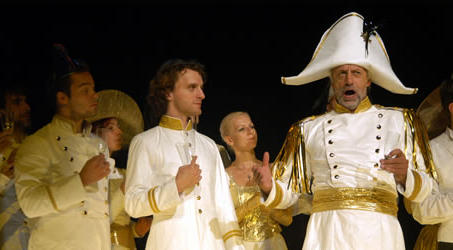 Who would not know Karel Šíp and his unique sense of humour? This play written directly for the Brno City Theatre, which preview took place in Plzeň a year ago, is situated in the last years of the Austro-Hungarian Monarchy. It is full of lovely melodies with witty texts and makes fun of various problems with ruling, terrorism, history and so on, in the very best sense of the word. How was it with the love of the successor to the Austro-Hungarian throne Ferdinand d´Este to hunting, Konopiště and women? Did Ferdinand enchanted Sophia Chotek, or was he only a victim of perfectly elaborated women’s intrigues? What is the relation to Bergen and Šmíd, an Adriatic port and Hungarian? This all can be found in the new, original, purely Czech operetta composed by Zdenek Merta and written by Karel Šíp.

A Beautiful Start of the 20th Century

Ferdinand, kd’Este? on the scene of the Brno City Theatre

At the end of September 2006 an interesting premiere appeared at the dramatic scene of the Brno City Theatre. I stress that on the dramatic scene as the theatre has another new music scene. But it seems that genres are not so strictly delimited as the original Czech operetta was performed on the stage of the dramatic scene. Its title Ferdinand, kd’Este? (Ferdinand, Where Are You?) resembles in Czech the name of Archduke Ferdinand who was assassinated in Sarajevo and this act was a formal start of WWI. The title indicates a lighter genre. The libretto was written by Karel Šíp, well-known Czech humorist, musician and crowd-pleaser. The music was composed by Zdenek Merta, author of many works performed in Brno. Another \"basic\" artist is choreographer Vladimír Kloubek. The beautifully empty stage is designed by the Swiss stage manager Thomas Schulte-Michels.

Operetta should have a simple story. The one, situated by K. Šíp in the last years of Austria-Hungaria is simple and comes out of real events. Crown prince Ferdinand visits Archduchess Isabel too often, but not to court her daughter Cristina - this was regarded a matter-of-course and everybody was looking forward to their wedding. But Archduke Ferdinand fell in love with her maid of honour Sophia Chotek, coming from an impoverished Czech aristocracy. The higher society wanted to prevent the unequal marriage, but as it usually takes place in operettas, love overcomes all obstacles. And so the old emperor Franz Joseph appears on the stage to bless the young pair. There is already nothing to prevent the love of the young pair.

Everybody knows the end of the story and it had to happen at the stage of the Brno theatre too. The story, which takes place at Ferdinand\'s favourite Konopiště castle and in beautiful Opatia, is ended with the Sarajevo assassination. The idyllic time of the beginning of the 20th century ends at the end of the operetta.

Screenwriter Karel Šíp did not certainly worry about the story building. Songs are usually - but not always - where they should be. Dialogues, sometimes witty, sometimes less witty, flow quickly to not delay the action. Šíp bet on his own humour, tried many times in his own performances and talk shows. And he was not wrong. In spite of the non-operetta construction of the story the spectator enjoys details and does not mind that the unit is just a mosaic, or a folding picture book.

Well, why did he select the title operetta in the time when musicals are played \"at full blast\"? The reason may be his endeavour to create a period patina. And this really succeeded. And when the live orchestra excellently conducted by Karel Cón (and Karel Albrecht) and the traditionally high-quality dramatic performances of all protagonists are added, it means the only thing: The Brno City Theatre succeeded to produce another sold-out performance. The auditorium will thunder with laughter again and leave the theatre satisfied. Always when I leave the theatre, I remember the former Brno protests when the music scene was under construction that Brno cannot maintain so many stages. Well, it can. It just depends on the quality.

Ferdinand, Where Are You? I Have a Good Time in Brno!

The present does not favour opera. Within the light-footed music-dramatic genre, musical is usually preferred. But there are some exceptions. One of them is the Brno City Theatre which presented two premieres with different casts of operetta comedy Ferdinand, kd’E ste? written by Zdenek Merta (music) and Karel Šíp (libretto) on September 23 and 24 It is a second-rate problem to what extent the attribute “operetta” applies. The substantial thing is that a good performance was born which wants to entertain in an intelligent way. It is neither profound, nor pandering and it is not slipping into a decaying variety show humour. The story itself has a character of operetta stories, although it describes a historic reality which results in a tragedy, not in a happy ending. Moreover, the theme dates back to the period of Austria-Hungaria, which was a golden age of operetta.

Both the authors offer their operetta “Ferdinand” with an expressive irony and exaggeration, signalled in the title of the comedy itself. The total witty detached view from the historic facts creates conditions for a cascade of jaunty scenes in which a kitsch is exaggerated intentionally and turned into a slapstick. And so forest spruces are dancing right at the beginning, three little tigers attack Ferdinand and, after an interval, the persuasive choir of hunters is permeated with a women’s choir of dancing hares and their playful offspring.

The operetta Ferdinand, kd’E ste? was presented in the Pilsen theatre more than a year ago. But the present Brno performance is not by far an accurate copy of this “pre-premiere” performance. There were changes and shifts perhaps in all respects. While there was a medium-size orchestra in Pilsen, only ten instrumentalists play in Brno, including conductor Karel Cón or Karel Albrecht, both playing the piano. This time, Zdenek Merta was inspired by corny cabaret songs and melodies resembling those of Hašler. But the composer was influenced by much more period essences. Vladimír Kloubek moved everything properly with a fine mocking irony and his fresh ideas provoke bursts of laughing in the auditorium. The performance directed by a Swiss director and scenographer Thomas Schulte-Michels, was born at an enviable ease. And this is proven by every scene. Although the scene is bare in fact, just framed with empty black walls, the spectator has not a feeling of emptiness. Schulte-Michels comes with a partial graphic tools, uncovering now and then the background to provide insights in the imperial court, the fishermen’s place, the Serbians, the whorehouse etc. The humorous exaggeration is also present in the costumes designed by Andrea Kučerová. However, the historic figures, especially the members of the imperial court are not parodied or caricatured. Sometimes, white painted faces help to sketch in the physiognomy.

It was evident during the Saturday premiere that the actors really enjoy their roles. Perhaps, the most freewheeling was Martin Havelka playing Ferdinand’s brother Otto, a well-known bon vivant, in this respect. His performance was so natural and convincing that it seemed that the actor does not play at all. Petr Gazdík, “duly softer in an operetta way”, excels in the title role. Ján Jackuliak acting Joseph Lányi, a Hungarian teacher with his lovely gibberish, is almost beyond recognition. The pair of secret policemen Berger-Šmíd, taking you through the entire performance, is acted by Tomáš Sagher and Lukáš Kantor, a couple of actors contrasting as regards their appearance and articulacy. Of the ladies let me mention Zora Jandová, whose part of an old Gypsy woman, with a demanding final song, was made to measure for her by Zdenek Merta.

The operetta Ferdinand kd’E ste? (Ferdinand, Where Are You?) will certainly be a success in the South Moravian metropolis. And so, the author of these lines took the liberty to complete its title in the heading with the response: I have a good time in Brno. 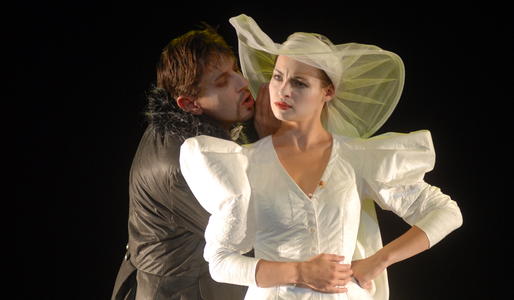 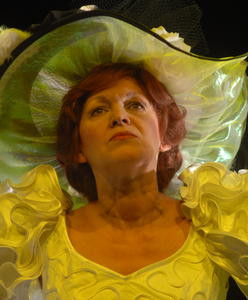 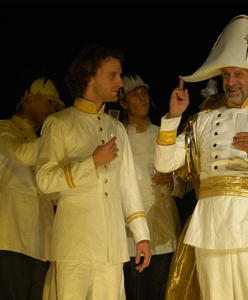 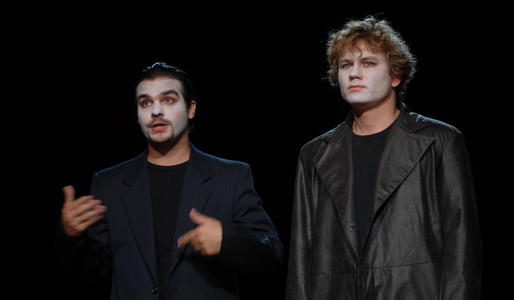 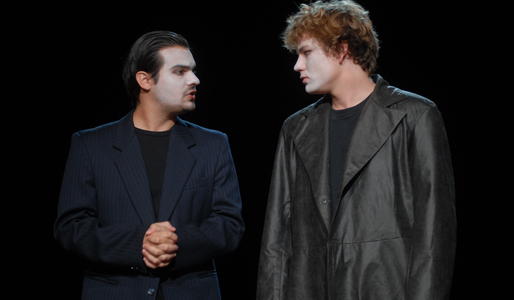 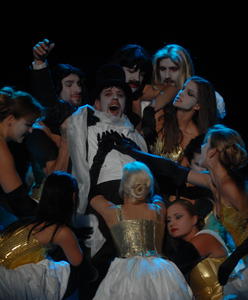 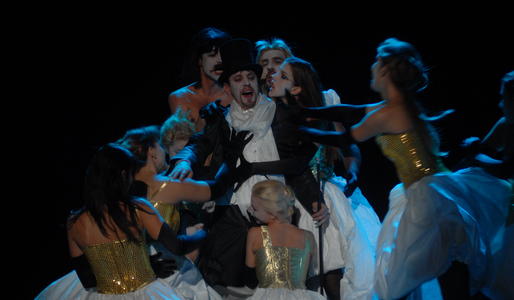 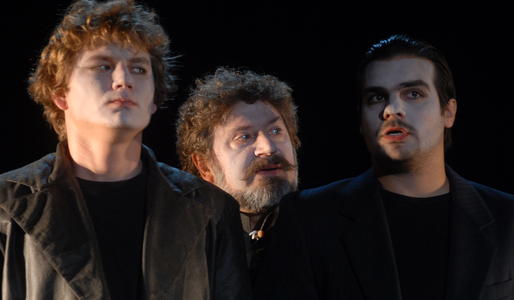 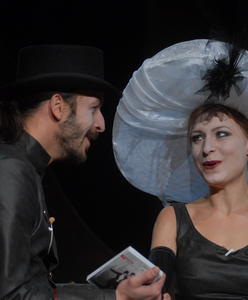 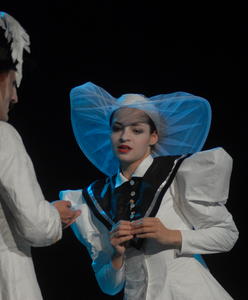 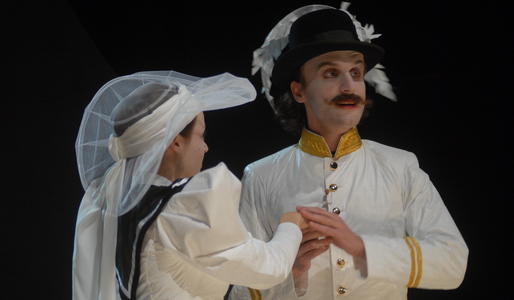