A playful comedy (and one of the best-written comedies in the history of theatre), about two Oxford students, Charley and Jack, who are getting ready to invite the loves of their lives on a date. As they are shy, they are hoping to achieve their goal by arranging it as a meeting with Charley’s aunt. A malicious coincidence, together with their debts - typical companions of people’s student years in every country and time, causes a somewhat spoilt student, Babberley, to appear in the role of Charley’s aunt.

Many surprising situations and excellent humour, which derive from the best English traditions, are a reliable guarantee of quality entertainment for the audience, with pleasant tones of nostalgia. Gustav Skála was commissioned to direct this piece – let’s remember his and our ´immortal´ ‘Flea in her Ear’!

Pavel Klejna 16. February 2009 zdroj Divadelní novinky.cz
Author: Brandon Thomas, Brno City Theatre as part of the Czech Theatre 2009 show, 15th February 2009
An excellent production as presented by the ensemble of Brno City Theatre - Charley's Aunt as it should be. A zesty situation comedy raised up to the higher plane of real art. Brno has managed to combine great direction, excellent acting performances and a superb new translation by Jiří Záviš. The result is stunning.
Charley's Aunt is perhaps the most rewarding comedy of all time. However, obviously there are differences between individual productions of it. In Brno City Theatre, they have made it into a load of fun. While other stages strictly stick to the original text, Brno have adapted the dialogues to their needs and it must be said that only for the better. I acted in Charley's Aunt myself some time ago and I know what I am talking about when I say that the added texts are a good thing. First, they aren't familiar and secondly Brno has managed to remain within the bounds of the comedy itself without making references to present events at any costs, as often happens in other performances.
The director and choreographer, Gustav Skála, deserves a gold medal for the way he managed to set, and mainly maintain, the pace and suspense in his play. One gag follows another, joke after joke. Also, the movement aspect is excellent. The eternal worries of Charley (acted by Alan Novotný) and mainly his clumsiness and inability to catch anything that is thrown at him will evoke roars of laughter in the audience, as will the dancing and singing creations of Lord Babberly, acted by the great Igor Ondříček. I wouldn't want to offend Mr. Ondříček in any way but from his movement skills it would seem that he must have studied his role really carefully and in great depth somewhere in a bawdy house. When he artfully throws his skirt onto the stage, he is rewarded by long-lasting applause. The student Jack, acted by Petr Štěpán, can change in a flash from moments full of energy and verve to moments in which he transforms into a helpless baby and isn't able to utter a single word.
The role of Charley's real Aunt, Donna Lucia, is quite a hard one as she has to come to terms with situations with almost unbelievable kindness and be pleasant through and through. Something like Božena Němcová's Grandmother. It needs to be stated that the actress Ms. Irena Konvalinová managed the role very well and also managed to give something human and real to Donna Lucia, who in her interpretation is certainly not so one hundred percent positive - and this is good!
The girls, acted by Pavla Vitázková (as Kitty), Radka Coufalová (as Amy) and Lenka Janíková (in the role of Ela), prove at first sight how much they enjoy this production and how they are amused by it. It is a pleasure to watch their synchronized movements either in pairs or even as a triple together with Babbs. Their coyness and shyness change, as if with one wave of a magician's wand, into decisiveness and the strong will to pursue their ideals and not compromise in the least.
Zdeněk Junák! You haven't seen such a Spettique yet! Virtually everybody in the auditorium has an urgent desire to kick him for his greed, greasiness and servility which he alternates with supremacy and contempt. And it his him who controls the stage, with unquestionable dominance, even at the moment when he is broken and defeated. He fully uses his physiological properties and thanks to his robust figure and strong voice he gets deserved attention.
All actors play with enthusiasm and for the spectators. They are keen on their roles and it can be seen that they enjoy acting. All of them can be understood well and if you are lucky and sit in the first rows, you can also watch their perfect face-play, particularly that of Josef Jurásek and Jan Mazák as colonel Chesney, or the servant Brasset.
The author of the costumes and the stage, Eva Brodská, also deserves praise, as well as the scene-shifters who managed to re-arrange the stage in record short time. Basically, the whole production team amazed me with how well they managed to adapt such a demanding play to the environment of the Prague theatre Divadlo na Vinohradech, which was previously unknown to them.
If you have the opportunity, you certainly shouldn't miss Charley's Aunt at Brno City Theatre at any cost, I stress: at any cost, do not miss it! You won't regret your visit.
"Live is short, art is permanent."

Donna Lucia, the aunt from Brazil, where the nuts come from

It could have been deceptive to go to Brno City Theatre to see that triumph of world slapstick comedy, Brandon Thomas' Charley's Aunt, expecting that the performance staged by Gustav Skála would be a simple repeat of his team's earlier success - bringing the world the best Czech version of Feydeau's A Flea in Her Ear.

First of all, Charley's Aunt is a slapstick comedy of a completely different kind - let's say (with a bit of exaggeration) the "cross-dressing" type, so it is closer, for example, to Some Like It Hot where two men also have to perform well in women's clothes.

I recommend buying the programme for the performances at Brno City Theatre. You cannot get such extensive information about the wide context of the author's time and works anywhere in the Czech Republic. You'll learn how many times and where Charley's Aunt was performed, and that after a premiere, a thousand repeats often followed… And also that probably the most famous Aunts in our country were Vlasta Burian, Lubomír Lipský and Jozef Króner.

I won't describe the story. If you don't know it, you don't go to the theatre anyway. So maybe it is the 'last call' to leave the nonsense on television: if you don't start with Charley's Aunt, just don't bother about that 'theatre stuff' anymore. You won't understand anything else. This is the last chance to get your laughs from something other the Czech political scene with its provincial farces.

A solo for Igor Ondříček

It is always important to have a good 'Aunt' in the acting ensemble - Donna Lucia D’Alvadores from Brazil, the country where the nuts come from (the 'real' one was performed by Eva Gorčicová at the premiere), who is in reality the good companion and eternal Oxford University student, Lord Fancourt Babberley, known as Babbs. No one better than Igor Ondříček could have crossed Gustav Skála's path at Brno City Theatre.

The others play their roles alongside him as if there has been some kind of automatic transfer of his level of commitment into them: the Oxford graduates Charley (Alan Novotný), Jack (Petr Štěpán), his all-knowing servant Brasset (Jan Mazák), and of course, also their muses - Kitty (Pavla Vitázková) and Amy (Radka Coufalová).

After all the embarrassing situations and entwinements, everything understandably moves towards a happy end. Those who like each other will certainly get married, and they haven't thought about getting divorced yet. This is so unlike our above-mentioned puppet show of a political scene. And that is good, as well.

The theatre was booming with laughter

Last week at the premiere of Charley's Aunt at Brno City Theatre, I wasn't able to see the stage very well from the balcony - I couldn't see the area where many of the gags took place at all - but I had a good view of what was going on in the auditorium. And things were happening there: one lady in her premiere dress with an ostrich boa was slapping her thighs like an African witch doctor. A large man, a well-known Brno businessman, didn't care at all that part of his honourable stomach started sticking out between the buttons of his shirt when he was laughing, and he laughed like mad. A young student of the Janáček Academy of Music and Performing Arts, who was sitting on the steps, laughed so much at one point that (excuse me for this) she lost the contents of her nose! Where were the indulgent intellectual smiles? Instead of professors, the auditorium was suddenly full of ‘plebs’.

In the Brno performance, everybody acts well, in fact, excellently. But Igor Ondříček as Donna Lucia is fantastic. A tall man, and on top of that with a manly receding hairline, he makes a humorous impression as soon as he appears in the excellently chosen woman's dress (Eva Brodská's creation). Clumsy in women's shoes, his manly voice modulated to act the part of a woman, his great helplessness as a person who gets trapped in his own webs of lies didn't leave a single dry eye in the auditorium.

Director Gustav Skála used all the positive elements of Jiřího Záviš' new translation, as well as the alterations which he made with the dramaturgist Ondřej Šrámek (some passages are shortened compared to the original). He also managed to reproduce, to a certain degree, the comic Oxford student slang of the English original, and the smooth straight language that is its opposite, with the Czech equivalent of these two aspects, even though this is always the hardest nut to crack when translating Charley's Aunt.

A commercial situation comedy is almost always a guarantee of a sold out theatre. Simply, it is a blockbuster. People want to laugh; they sometimes want to be "plebs" more than "professors". Brno City Theatre has managed to produce a pure-blooded entertainment piece. Those who would like to see works with deeper content should go and see Mary Stuart, Markéta Lazarová or Waiting for Godot. You won’t feel like laughing quite so much during those performances.

It is nice that a theatre has so many faces! It is great that you can laugh so beautifully in Brno! 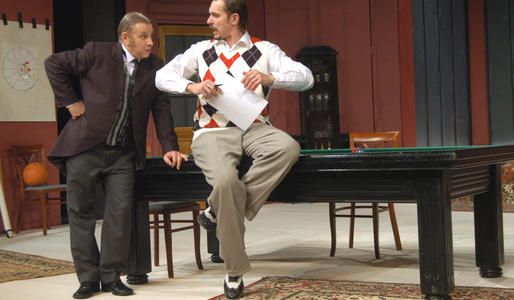 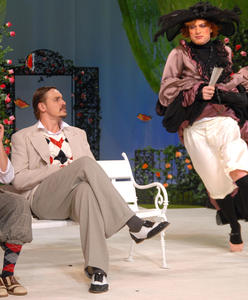 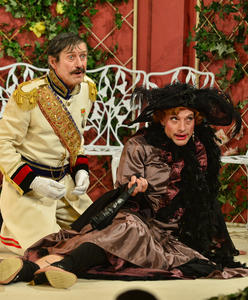 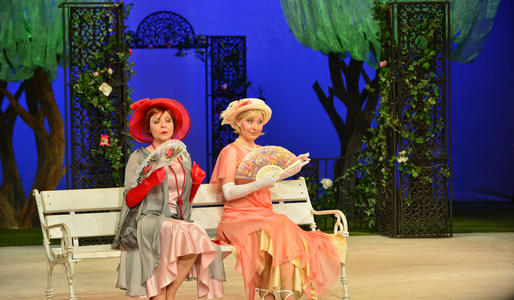 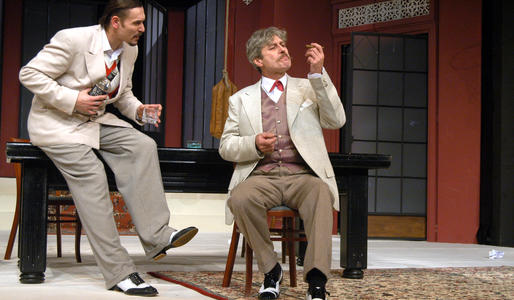 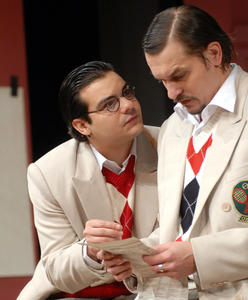 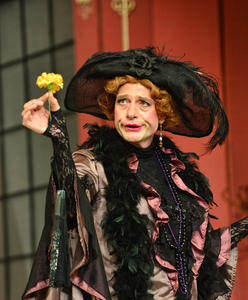 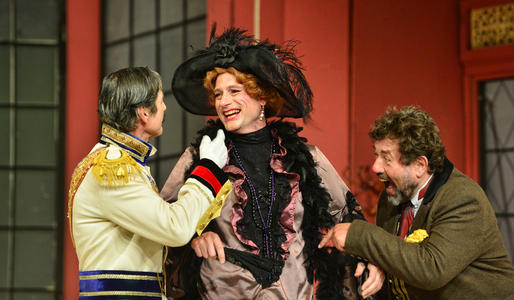 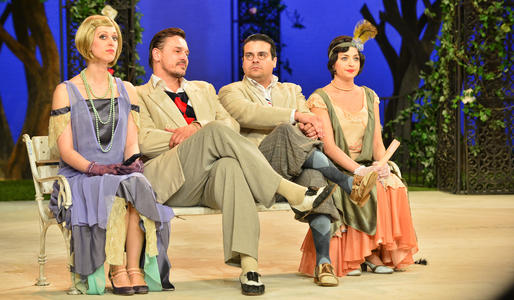 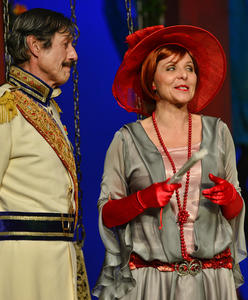 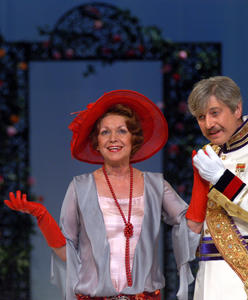 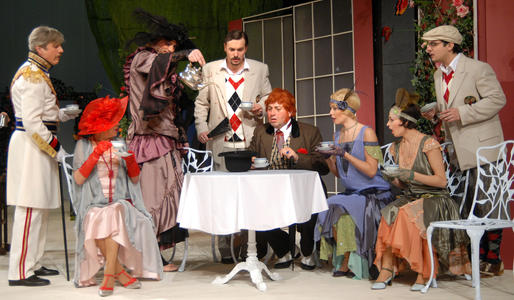