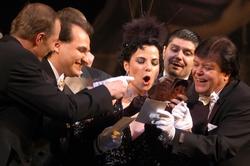 Franz Lehár’s Merry Widow is undoubtedly one of the most frequently presented classical operettas worldwide and, simultaneously, a treasure of this genre. Its first night in 1905 made a splash not experienced by Vienna a long time before and afterwards. The operetta spread worldwide soon and has lost nothing of its charm so far. Franz Lehár, the leader of the Silver Age of Viennese

Operetta, was inspired by a subject of his days. Although Franz Lehár won qualification of a “genius of operetta in minor” thanks to his later operettas destitute of traditional happy ending, merry waltz and cancan rhythms sound aloud in the Merry Widow retaining its traditional happy ending. A lot of its melodies, such as the songs of Maxim or Vilja, became operetta evergreens. Thanks to them and due to the well-written libretto, Merry Widow has been

amusing audiences all over the world and is presented by famous opera houses.The quality of the Brno production is quaranteed by its international production team – led by the German director Pavel Fieber, who introduced himself to the Brno audience with the musical Cabaret.

PAVEL FIEBER BRUSHED UP ON “JOLLY WIDOW”, HOWEVER HE KEPT UNCHANGED THE ORIGINAL PATINA OF THE “JOLLY WIDOW” OPERA OF THE CITY THEATRE OF BRNO

“A statue which is exposed to weather effects use to acquire a very unique and often attractive finish due to chemical or corrosive effects of the weather” or at least this is what the Wikipedia Encyclopaedia says. Operettas are just like such statues, because due to decades-lasting corrosive effects, they have acquired a refining patina, however as years passed by, they were put aside and kept in a corner, covered with dust. He, who successfully cleans such dirt from such a work of art, can in many cases show a perfectly well preserved surface. On the other hand, he, who tries to clean away also the patina together with the dust, can damage such a work of art so much that the damage can never be made good. Nowadays, only few restorers are able to push the quality of an opera in the right direction. In Brno, this was without any doubt achieved by the director Pavel Fieber and a very famous operetta by Franz Lehár “Jolly Widow” was re-staged again without any damage. Fieber´s version, role and plot were taken seriously, giving origin to a presentation that undoubtedly brings credible characters to the stage which represent the culmination of the art of acting. Such characters are no singing caricatures which use to be fashionable these days and which stand on the ruins of a favourite operetta of the past. Costumes – regardless of the quite poorly dressed dancers - well designed by Andrea Kučerová, help to transmit the resurrected operetta magic to the spectators. A gigantic crinoline ended up with a tight bodice is the dominant of the stage. Such a gigantic dress, floating over the stage in the first act as a grotesque baldaquine brought down from rigging loft in open or hidden manners, plays a wide range of roles in the other acts, being such roles more of a decorative character. In the second act we wonder why such a giant dress, playing a role of a tent, is not at the same time used as a garden house sheltering the couple of lovers; instead, Rosillon and Valencienne pass through and disappear for unknown reasons in the background of the stage. Both parts of the stage are decorated with rough paintings the style of which could be defined as something near to a curious mixture of expressionism, Belle Époque or dada, and which create strange, almost surreal contrast of the above-mentioned crinoline. The orchestra of the Městské divadlo, conducted by Caspar Richter, presents the spectators immortal melodies in a breathtaking and pleasant manner. Richter is especially successful in the maintaining of the acoustic balance among the singers on the stage and the sonorous tones coming from the orchestra pit. To conclude it should be said that the first step of the Městské divadlo of Brno from drama and musical or operetta holds out hopes for us to see other interesting performances of this genre. We cross our fingers to Stanislav Moša so that he could present us another adventure from this magic land. 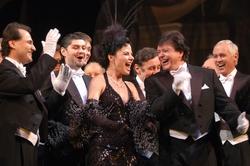 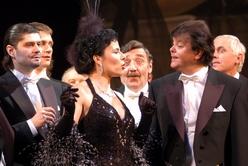 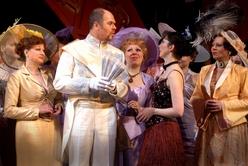 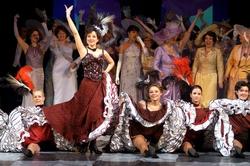 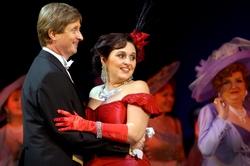 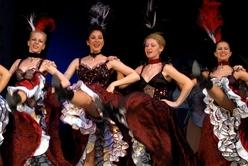 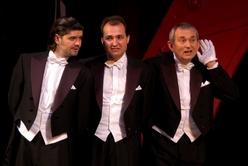 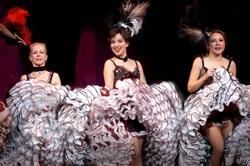 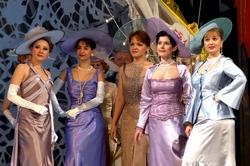 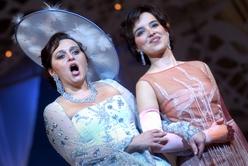 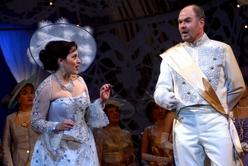 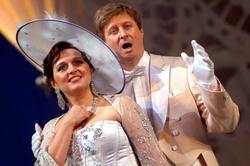