a crazy féerie with songs by the most famous band of all time, the worldwide openning

What boy wouldn´t want to found a band at the age of sixteen? What boy doesn´t dream of provoking excited screaming from crowds of fans the first time he touches the strings of his guitar, in front of a full stadium? The four sixteen-year-old heroes of our story are practicing so intensively and hoping so strongly that they “will be like the Beatles” one day that they fall through the music rehearsal room that’s in their garage into Beatleland. This is a very strange world full of bizarre characters and dream landscapes, a world where James Bond meets Winnie the Pooh and which is ruled by a four-bodied divine being called GeorgeJohnPaulRingo. Most of all, it is a world full of songs by the Beatles, special adaptations of which will be played in our production: Here Comes the Sun, Lucy in the Sky with Diamonds, All You Need Is Love, Don’t Let Me Down, Michelle, Help!, Strawberry Fields Forever... In the very centre of Beatleland there is a recording studio, Abbey Road, where the enchanted boys (pursued through Beatleland by the staff of the secondary school from which they mysteriously vanished) end their wanderings and it all culminates in a grand party full of Beatles-esque musical euphoria. This original jukebox-musical by the well-proven authorial trio Slovák-Šotkovský-Štěpán and also Zdeněk Merta, a specialist in Beatles songs, will serve up a hearty portion of joy through its ageless hits.

I PLAY THE GREATEST REBEL, FIFTEEN-YEAR-OLD ŽANEK FROM THE NEW MUSICAL BÍTLS SAYS

Hits such as She Loves You, Help and Yesterday by the legendary band The Beatles are known to everyone, and probably by heart. Matyáš Kyncl from Hustopeče in the Břeclav region managed to stand out from among eighty applicants and get a role in the musical Bítls at Brno City Theatre. “I play Žanek, who is the greatest rebel of all the boys. I like it,” says the fifteen-year-old talent from Hustopeče grammar school. The audition wasn’t just about singing songs by the Liverpool band; part of it involved a choreographed dance routine. “I was most afraid about the dance bit, but I was chosen in the end,” said Kyncl, remembering his initial worries. A round of rehearsals for the premiere followed, taking place almost every day. “Žanek” thus had to combine his studies with rehearsing for the role. The plot of the musical takes place in a small town in 1967 where a trio of friends are trying to start a band and are dreaming of a life as rock stars. Their lives change at the moment when the city is visited by two foreigners. “It is interesting how the authors managed to combine a Moravian town and England. In fact, it is almost absurd, but it is great fun,” the grammar school student says. The young musician started with music early, when he was only small boy, and he is constantly working to improve himself. (…) Apart from acting at the theatre, he also writes poems and composes songs. (…) His plans for the future are clear. (…) “I certainly want to continue with acting as it is fulfilling for me and I have great colleagues at the theatre,” the young man adds.

The well-proven authorial trio from Brno City Theatre, Stanislav Slovák, Jan Šotkovský and Petr Štěpán, have combined their skill and wit with timeless songs by the legendary band to create a musical comedy about a dream that turns into an unbelievable tale. In a crazy plot full of twists and turns, the scenery of England and the residence of the British Queen Elizabeth II alternate with the realia of a Moravian village near Brno in 1967. (…) Three boys with guitars are dreaming of being a proper band. They are missing a drummer and there’s one singer too many. She doesn´t fit in with their ideas but unfortunately happens to be the daughter of the chairman of the local National Committee. He’s got everything under his thumb and wants his daughter to become famous. The band gets the opportunity to perform at the local folk festival. But how can they arrange things so that they can do it the way they want, without the favoured and spoilt chairman’s daughter? However, things start happening, and soon everything accelerates into a rapid flurry of surprising events. The British Queen, who loves her Beatles, calls James B., agent 006. He has to find Ringo Starr, who has gone missing. The trail leads to a village near Brno… The musical has pace and wit; it’s a barrel of fun from beginning to end and is rightly rewarded by thunderous applause. The crazy plot entertains through its dialogues as well as via parody, and of course there’s plenty of great music, singing and dancing, as one would expect of a musical comedy, along with the happy end that this genre requires. Of course, the excellent interpretation of the legendary Beatles’ evergreen melodies by Brno City Theatre’s soloists and choir help to get the audience on board. Each of the many participants contributes greatly to the overall impression and success of the production. The trio of young guest actors that play the main characters of the show (i.e. the guitar-playing founders of the band) do a praiseworthy job. Sára Milfajtová was impressive as the Queen and Petr Štěpán played the chairman of the City National Committee with great style. The way he led the meeting was a textbook example of well performed and quite realistic parodic farce. (…) The spoilt daughter was played nicely by Eliška Skálová, and the show would not have been such fun without Michal Isteník’s servile secretary. We could just go on and on in this way moving from one actor to another. The “Rock God” (played by Dušan Vitázek) was a great success thanks to his singing performance, which was particularly strong in the case of Let It Be. This introduced character symbolized the spirit of the time seen through the eyes of those that were young back then. (…) Brno City Theatre’s Bítls is a tribute to the legendary band, to everyone they inspired and also to a period that seemed so full of promise. This “light” and crazy musical comedy succeeded with a bit of help from the Fab Four’s ageless melodies and excellent performances by the theatre’s orchestra, soloists and choir. Brno City Theatre has a new original production on its repertoire that will surely please and entertain a wide range of spectators and have them singing along in their minds. There can never be too many shows like that.

(…)Juřan, Žanek and Pavlík are three lads with their own band, the Beatrolls. Sounds like a good start, but unfortunately they also have several reasons for dissatisfaction - they dream of living rebellious lives, but instead find themselves only playing popular dance hits. They also lack a drummer, and their singer Renča isn´t very talented either. The producers don’t want any other revelations about the plot made public, so I’ll respect their wishes and say no more, but believe me - it’s full of unexpected twists and crazy surprises. The British Queen turns up with her chamberlain, a famous martini-drinking spy makes an appearance, and there’s even a rock version of God. As the authors have announced, Bítls is a really zany musical. However, it does feature excellently written dialogues alongside clever and evenly dosed humour full of wisecracks and cultural references. With its setting in the 1960s, the show also reflects on our socialist past, but this is done gracefully and it’s not too overbearing. As far as the authors’ work is concerned, the greatest respect is due for the way they steered clear of making a show full of Beatles songs into a biographical musical about the legendary band. The Beatles function here as a symbol of the dreams boys have about the world of music, and it is taken as given that everyone already knows the songs. Moreover, the music is cleverly incorporated into the plot and the production isn´t just a “glued-together” patchwork of songs, as can sometimes happen in similar musicals. (…) The musical Bítls is mainly a tribute to the legendary Liverpool band – admiration and excitement for their music radiates from it from beginning to end. The evening contains around twenty songs in an excellent arrangement by Daniel Kyzlink and Jiří Levíček that’s original and often surprising yet still remains faithful to the spirit of the originals. (…) Seven secondary school students were selected by audition to play the roles of the three boys. Tomáš Dalecký, Miloš Fiala and Jan Dvořák acted in the premiere. All three of them made a great impression thanks to their natural acting and mainly their excellent and exact singing – they even managed a trio. All of the three boys are highly skilled. (…) The whole cast are worthy of praise. It is clear that the authors know their ensemble perfectly and the roles were well-tailored to the actors. The comic duo of Petr Štěpán and Michal Isteník got the most laughs as the chairman of a local committee and his “dogsbody” Kolóšek. Aleš Slanina was also fantastic as a secret agent, particularly when he was seducing young Renča while singing the song Oh Darling! Sára Milfajtová as the British Queen may not say a single word during the performance, but her one song towards the end of the evening is really worth the wait. However, Dušan Vitázek provided what was unquestionably the greatest experience of the show as the (excellently written and Slovak-speaking) rock God character. (…) 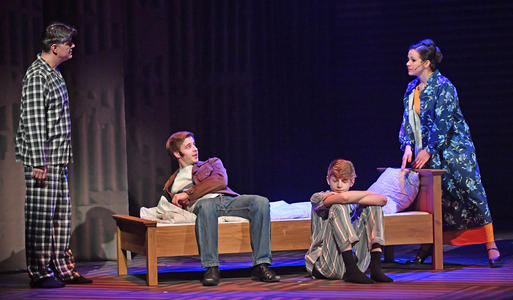 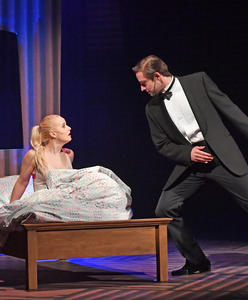 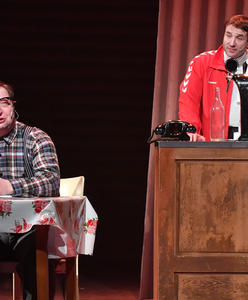 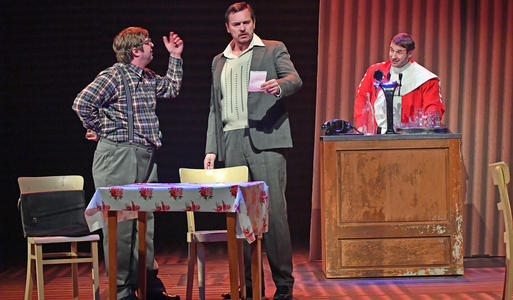 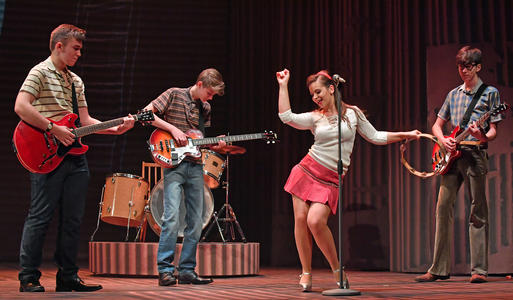 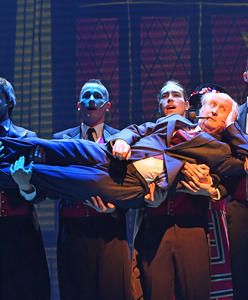 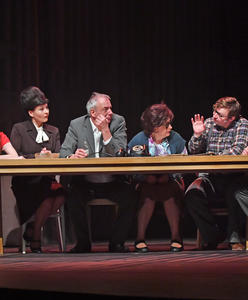 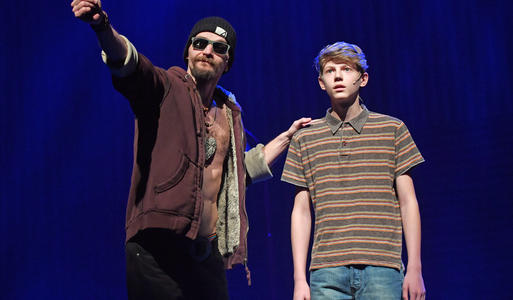 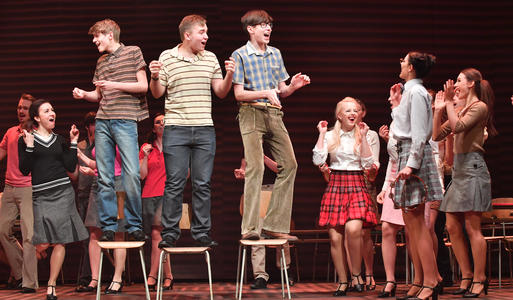 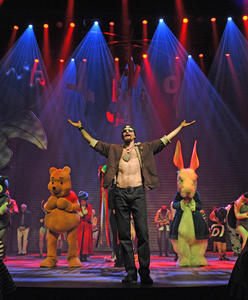 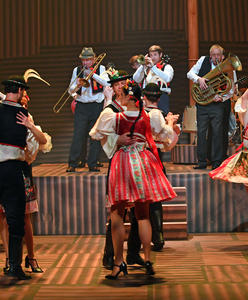 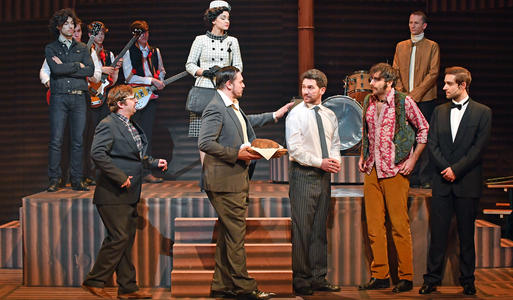