a comedy about the journey from the highest heights to the very bottom, and then beyond

Bohumil Plánovský, head of the Biochemistry and Molecular Biology group at the Institute of Organic Chemistry and Biochemistry of the Czech Academy of Sciences has attained the highest goal – he has managed to discover the mechanism that enables the appearance of a new species, and thus the essence of evolution. This inspires his old friend Adam Šmíd to analyze the genome sequenced by Plánovský from his own standpoint, from the perspective of a mathematical linguist. If we understand a genome only as a sequence of twenty letters coding individual amino acids, couldn’t there be some kind of message from the being or beings who created us encrypted in the genome? That is, if we were actually created, of course.

This is the starting point for the new comedy by René Levínský which the National Theatre in Prague premiered in November 2016. At Brno City Theatre, under the direction of Hana Burešová, a modified version of the play will be presented: it takes place at scientific institutions and restaurants that are found in Brno, and features a grand finale in the park under Špilberk Castle.

The questions which Levínský’s new play asks are, in fact, quite old. Can we (and should we) modify a human genome to create a “new and better human being”? Who will be the chosen one that challenges mankind to set off on a new journey? This play about the world of science and pseudoscience, the Sisyphus community, about the journey from the highest heights down to the very bottom, and then beyond, was created with silent respect for the remarkable life of Ilja Rips.

PRIZES AWARDED AT THE FESTIVAL OF LAUGHTER: BRNO ACTORS WERE THE MOST SUCCESSFUL

(…) Brno City Theatre scored in three categories with a comedy by René Levínský, Press Space and Continue. Petr Štěpán was named the best actor of the festival for the role of engineer Bohumil Plánovský, Hana Burešová received the Award for Best Direction, and the professional jury also gave the play an award. “I saw the production Press Space and Continue at its world premiere at the New Stage in Prague. It wasn´t bad there, but I wasn’t convinced about the quality of the script.  Director Hana Burešová and her dramaturge Štěpán Otčenášek adapted and condensed the play, emphasising certain important and human moments which are also comic, and the play suddenly started living for me. Thanks to their adaptation, I came to understand what the play had to offer. I didn’t get that from the Prague production. It is a work which has the potential to be performed on stages abroad,” a member of the jury, Zdeněk A.Tichý, said. (…)

The comedy Press Space and Continue is set at a scientific institute, and it is obvious that the author of the play, René Levínský, knows this environment very well. As a result, while the dialogue may sound absurd in places, it actually reflects the reality of the strange world scientists inhabit completely accurately (though with slight exaggeration, of course). Even though Hana Burešová´s production feels like a standard conversational comedy from an unusual environment most of the time, it has a lot of higher ambitions. It centres around a revolutionary scientific discovery which isn´t just a source of humour: it also makes one think about where the ethical borders of scientific research lie. Burešová made sure the actors didn’t go overboard with exaggeration, and much of the time they portray their characters in such a way that it wouldn´t be a surprise to meet some of them in real life at a science faculty or institute. The feeling that this play also concerns the local ecosystem of the spectators themselves is also strengthened by it being set in Brno. The main role of successful scientist Bohumil Plánovský is played by Petr Štěpán. At the beginning, he is an inconspicuous, friendly person whose main fault is that he neglects his wife (played by Alena Antalová). However, his rapid rise obscures his judgement, which is revealed in a strong scene featuring a live television broadcast in which he challenges mankind to manipulate the human genome. As his passionate speech progresses, it starts to resemble the public performances of Adolf Hitler. This is no cheap caricature, however, but a logical outcome of his effort to create a new and better human. Igor Ondříček also moves things along in the Mephisto-like role of mathematician Adam Šmíd, who is constantly prodding Bohumil to perform dangerous experiments. The danger within this seemingly likeable character is suggested from the start by his devilishly red costume. Generally, it can be said that under Hana Burešová’s leadership the actors of Brno City Theatre successfully manage to create various characters that perfectly fit into this intricate scientific environment. Of all of them, I would most like to mention Svetlana Janotová in the role of a successful doctoral student who may be lacking in self-confidence but is perhaps the only character in the play that doesn’t act out of rapidly expanding self-interest: when asked to carry a genetically modified embryo from Bohumil’s wife, she agrees. Aleš Slanina should also be mentioned; he lent the entomologist Jonáš slightly autistic features. (…)

THE HUSTLE AND BUSTLE OF SCIENTIFIC (AND HUMAN) LIFE

Director Hana Burešová has produced a play at Brno City Theatre by René Levínský, a successful playwright and theatre actor with a degree in nuclear physics. The name of the piece is Press Space to Continue. (…) René Levínský´s scripts have never been simple - they have always taken various positions, sometimes even straying into the realms of controversy. This trend has become stronger since he started writing plays from the world of science, an area he knows well, having been professionally active within it for years (…) At the hands of guest director Hana Burešová and her long standing permanent dramaturge, Štěpán Otčenášek, the play mainly sticks to the genre of conversational comedy through all of its various situations as the plot unfolds. This is most noticeable in the area of language, which the author of the play works with as inventively and wittily as he always does. Burešová and Otčenášek’s interpretation of Levínský’s script shows great understanding for the author’s style of humour and his peculiar intellectual and human vision, creating a most entertaining performance. (…) Apart from the comedy aspect, which provides an insight into the personal and professional relationships and behaviour of the scientists, there is also another side to the play that concerns the asking of questions about the meaning and legitimacy of a phenomenon which could be called Creation. In other words: how far can a person can go when they penetrate the genome of living organisms in as similar manner to Mother Nature or God, and at what cost? (…) In this production, unnecessary details are eliminated by the actors, and – in balanced harmony – clearly and distinctly drawn characters take shape whose precision reveals a kind of almost fatal obsession. This is mainly with their work, but also with the desire to fill one´s life with something great that transcends the boundaries of our mundane existence. (…)

A FRUIT FLY, YEAST OR A HUMAN? PRESS SPACE TO CONTINUE AT BRNO CITY THEATRE

(…) The head of the Biochemistry and Molecular Biology group at the Institute of Environmental Chemistry at the Czech Academy of Sciences, Bohumil Plánovský (Petr Štěpán), has discovered the mechanism for the creation of a new species, or in other words the essence of evolution. His old friend Adam Šmíd (Igor Ondříček) wants to analyse genomes from his point of view as a maths linguist. What if a message from our creators is hidden in a genome? (…) Hana Burešová´s direction relies on simplicity and a rather traditional style, which is certainly beneficial in this case. (…) Burešová lets the original plot stand out, without significant adaptations. The production features excellent acting, with Petr Štěpán at the fore in the main role of Bohumil Plánovský, a man who is more interested in scientific experiments than in his wife Božidara (Alena Antalová). The well-coordinated cast is supplemented by Svetlana Janotová as the young Doctoral study student Anděla, Ivana Vaňková in the role of the beautiful journalist Svatava, and Aleš Slanina as the entomologist Jonáš.

The first premiere at Brno City Theatre’s Drama Theatre was the production of a play with a somewhat strange name, Press Space to Continue, by playwright René Levínský. (…) The dialogues, the behaviour of the persons involved, their way of thinking and the things they try to do all involve so many humorous moments that the spectators will laugh themselves into exhaustion. The perfectly written characters are a great opportunity for the cast. We follow the relationships between the scientists as regards the pursuit of their careers amidst occasional sexism and paranoia. The main hero, Ing. Bohumil Plánovský, PhD. (played by the great Petr Štěpán), divides his time between science and his wife, JUDR. Božidara Plánovská (a beautifully layered character played by Alena Antalová). A young doctoral student, Mgr. Anděla Suchemá (Svetlana Janotová), shows several features typical of a beginning scientist – she masters her fight with herself and looks up to her PhD supervisor. One more woman fits in well with the crazy environment: the journalist Svatava Hovorková. Ivana Vaňková has created a synthesis of all the quirks beautiful lady journalists can display for this role. And then there are also the male scientists. Prof. RNDr. Dušan Antal, DrSc. – a jovial idiot, simply a typical director. His career is perhaps already behind him but he is still holding on tight to his armchair. He is played very realistically by Viktor Skála. Prof. Ing. Cyril Špaček, DrSc. follows – he’s an emeritus biochemist, a jolly and understanding guy who probably knows you won´t offend anyone with praise. (Miroslav Čížek plays this role as if it were perhaps his hobby.) Doc. Ing. Vojtěch Růžička, PhD. represents the young and very ambitious generation (played by Rastislav Gajdoš, who seems to have grown up in such a laboratory). And an entomologist, Mgr. Jonáš Kristek, PhD. (Aleš Slanina), also contributes to the chaos at the lab. However, the key role in the story is played by RNDr. Adam Šmíd, PhD. (Igor Ondříček), a linguist and mathematician who manages to deconstruct a piece of DNA. (…) Press Space to Continue is a clever and entertaining piece and Brno City Theatre’s audience certainly has something to look forward to. 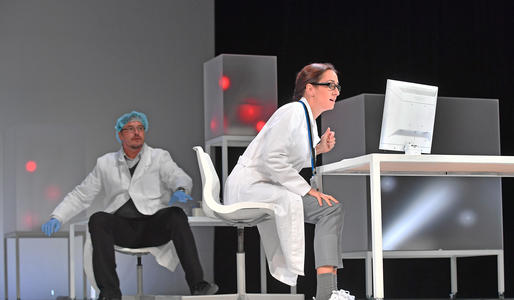 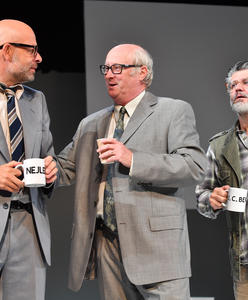 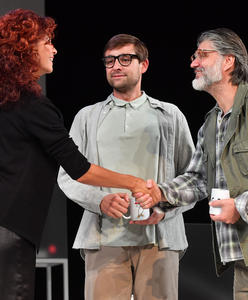 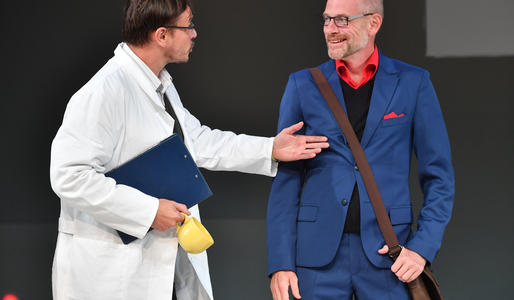 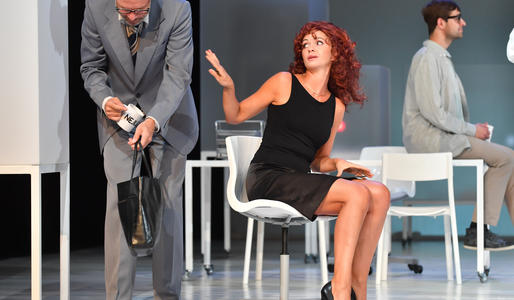 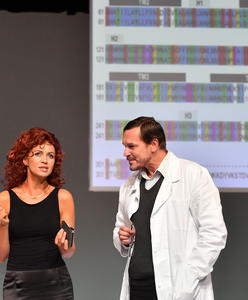 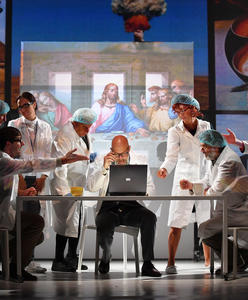 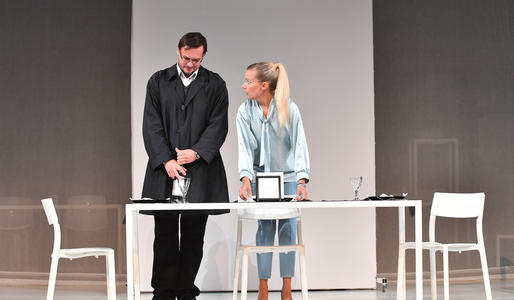 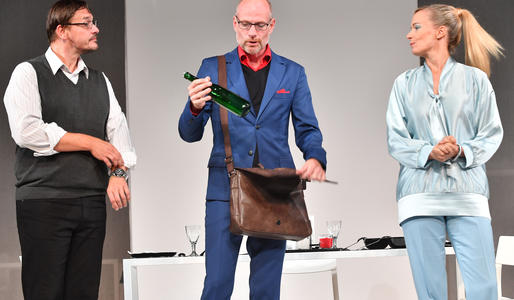 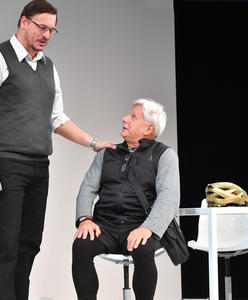 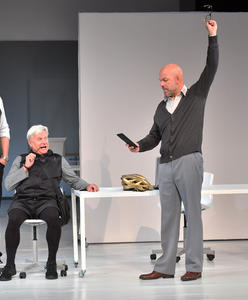 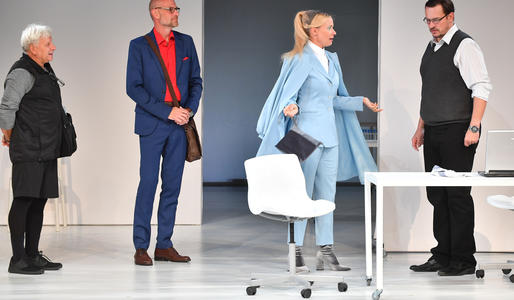